What is Foreign Influence, and when should it be disclosed?

Since early 2018, we have observed heightened awareness and increased activity related to foreign influence in academia within the federal government and amongst our peer institutions.

Federal funding agencies have issued new requirements and guidance, federal law enforcement agencies have increased prosecutorial activity, and Congress has signed new legislation and sought information on how the academic research community is responding to this evolving issue

Federal agencies and policymakers have expressed concern that foreign entities may be using the academic research enterprise to compromise the United States’ economic competitiveness and national security. Federal funding agencies have sought to clarify longstanding policies and issued new guidance. Federal law enforcement agencies have increased prosecutorial activity in unison with the federal funding agencies. Congress has signed new legislation and sought information on how the academic research community responds to this evolving issue.

Key Issues we need to be aware of are:

The General Accounting Office (GAO) recommends general processes for Universities, as noted in the figure below. The GAO states that U.S. research may be subject to undue foreign influence in cases where a researcher has a foreign conflict of interest (COI): 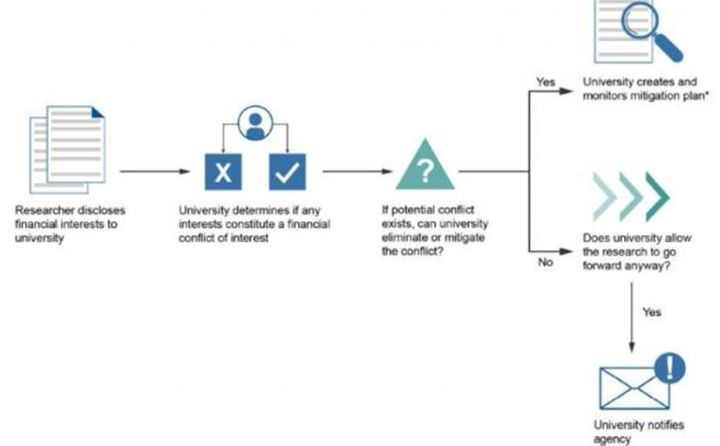 “In short, foreign funding of, and access to, U.S. higher education presents risks to students and professors alike, including insider threats and the knowing or unwitting creation of foreign intelligence portals. Those threats run from overt acts of bribery to the theft of private information through cybersecurity attacks. Accordingly, U.S. colleges and universities need to be vigilant: They should know the specific sources of funding and ensure there is an established comprehensive security and compliance program that furthers the institution’s mission, promotes transparency, appropriately protects their data and research, and accounts for U.S. national security interests.” Manatt, Phelps & Phillips, LLP (2020)

For additional information on Foreign Influence and the government’s response, click on the appropriate links to read more.