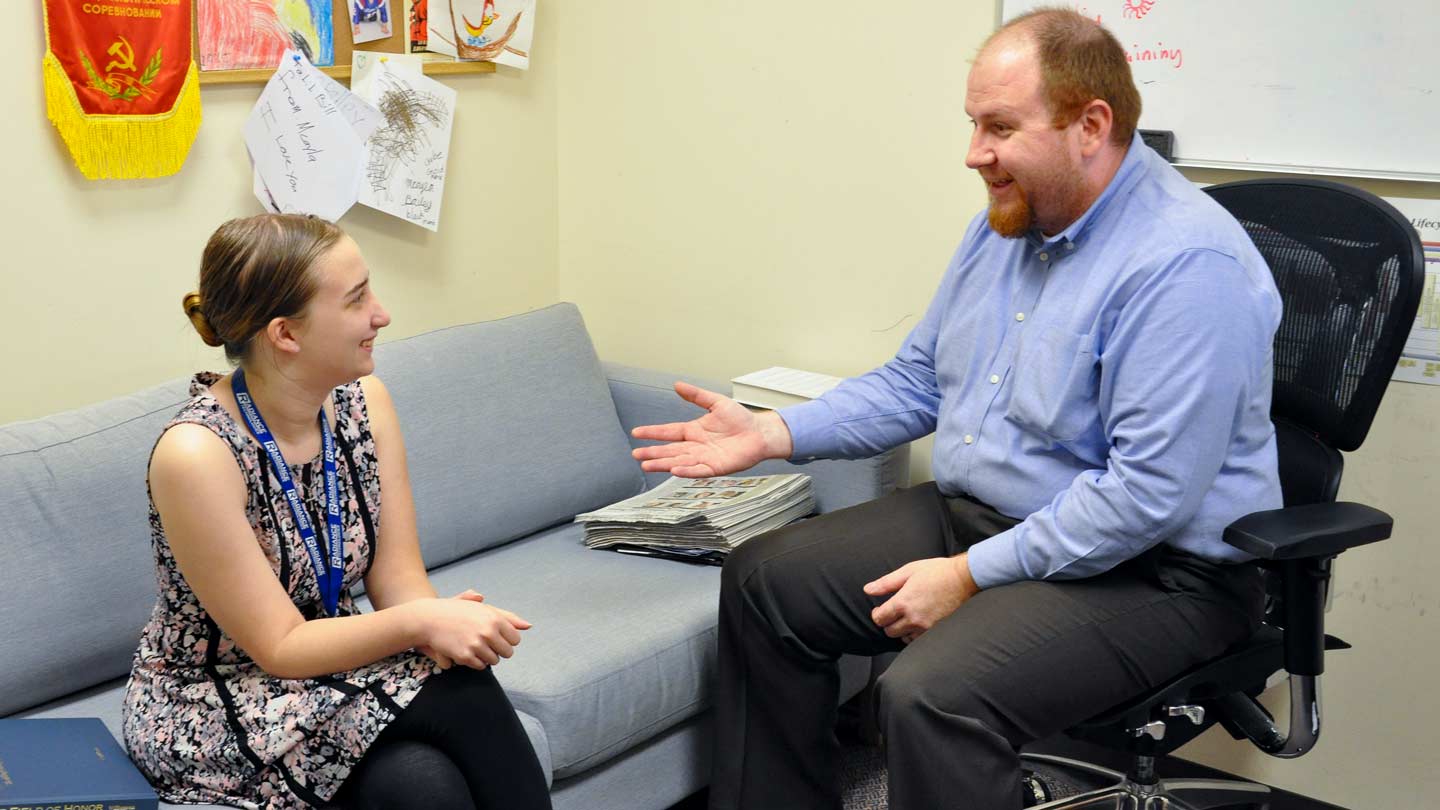 As a corporate history intern for Radiance Technologies, Meagan Bojarski (left) has been working closely with strategic initiatives analyst – and UAH alumnus – William Bailey (right) to compile a book that charts the evolution of the company and its capabilities from its founding in 1999 to the present.

Meagan Bojarski describes herself as a "late bloomer" when it comes to her love of history. "I hated it until about six years ago," laughs the Lawrenceville, Ga., native. That’s when, like so many students before her, she was inspired by a teacher who was able to bring the past to life, recounting in vivid detail the story of Napoleon’s return to France. "The event, as she told it, was something that could easily have come from a movie or book," recalls Bojarski. "I think that was when it first clicked in me that history didn’t have to be just names and dates." Now, the one-time history hater is well on her way to earning a bachelor’s degree in the field – with honors – at The University of Alabama in Huntsville (UAH). "I wasn’t entirely convinced of my decision at first, but the professors I’ve had have shown me I was right," she says. "I’ve been really lucky here, and I’ve learned so much." 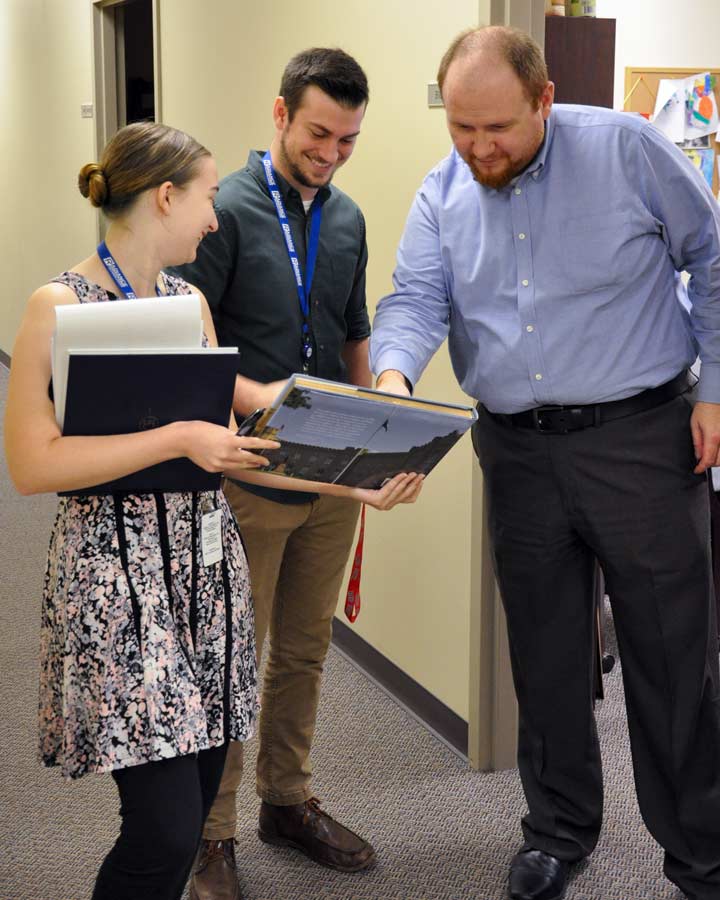 Bojarski and Bailey consult with Eric Lindstrom (center), a member of Radiance’s publications team who is also a UAH alumnus.

In addition to minoring in both English and Ancient & Medieval Studies, Bojarski has chosen to concentrate in public history, a rapidly growing but not always well-understood discipline that began gaining traction in the 1970s. "Public history is a really broad term. The simple explanation is that public history is history performed outside of the academic sphere, almost always for public consumption. Exactly what that consists of is somewhat difficult," says Bojarski. "By my personal definition, public history is the act of bringing history to the general public in a way that directly connects to their lives and provokes interest in the subject going forward. At the end of the day, history is about people. If our presentation of it is inaccessible to the people we are trying to connect with, we’re not doing our jobs properly."

Because those presentation skills are so important, Bojarski is diligent about seeking out opportunities to hone them. She has participated in several UAH Theatre efforts, including performing as a bereaved family member during an end-of-life simulation and as a student displaying maladaptive coping mechanisms for two collaborative projects with the College of Nursing. "I also worked on a cemetery tour event that included historic food, a discussion of the lives of those buried, and a demonstration of the Virginia Reel," she says. "And I have been lucky enough to participate in two public history internships." Last spring, she interned at Burritt on the Mountain, an open-air museum located on nearby Round Top Mountain. And since the beginning of this past summer, she has been serving as a corporate history intern with Radiance Technologies, a privately owned defense contractor whose capabilities include cyber solutions, engineering services, integration and prototyping, and operational and technical intelligence.

"The Department of History does a good job of making sure we are aware of job opportunities," says Bojarski, who learned about the Radiance internship through the Department’s social media channels and was encouraged by her professors to apply. "I received recommendations from Dr. Andrei Gandila, my advisor and the director of the ancient & medieval studies minor, and Dr. John Kvach, who was the director of the public history program," she says. "I was extremely grateful that they were willing to write me recommendation letters."

After submitting them with her application, she was invited to Radiance for an in-person interview with strategic initiatives analyst William "Bill" Bailey, who is both a UAH alumnus and a current student in the university’s master’s in business administration program. "He told me about the project and asked about my experiences," she says. "I got the sense that it was really important to him not just to make sure that I was right for the project, but also that the project was right for me." Needless to say, a match was made and Bojarski began work in early May. Her assignment? To compile a book that charts the evolution of the company and its capabilities from its founding in 1999 to the present. "We are developing this as a coffee table book, so a lot of it will be focused on pictures," she says, "but we also plan to include interviews, spotlights on important projects or moments, and of course the historical narrative."

At the end of the day, history is about people.

To that end, Bojarski has been spending much of her time interviewing primary sources identified and introduced to her by Bailey, and documenting their stories. "There is no way that I could write a book for a company I was just getting to know without a lot of help, so Bill made sure to be involved with the interview process with several people whom I did not know to help make sure we got the information we needed," she says. "He has helped me a lot in guiding me to subjects that I needed to research, introducing me to people to gather information from, and generally providing structure and direction to our project. We both need each other’s skills and knowledge, and I think that’s exactly as it should be."

She’s also focused on the logistics of getting a book to press, working closely with Radiance’s publication department and external vendors like printers to ensure that the project stays on time and on track – a process that she credits with helping her gain valuable soft skills like project management and problem solving. "While the concrete skills I have developed at Radiance will likely come up in the future and be beneficial to me, the more abstract lessons I am learning will assist me every day," says Bojarski. "I am learning how to approach new and intimidating problems; I am learning how to adapt and how to trust in my own abilities; and possibly most importantly, I am learning how to delegate tasks to others who have more experience than me. These will certainly become useful in my future, because jobs in history really require you to be able to fill more than one role." 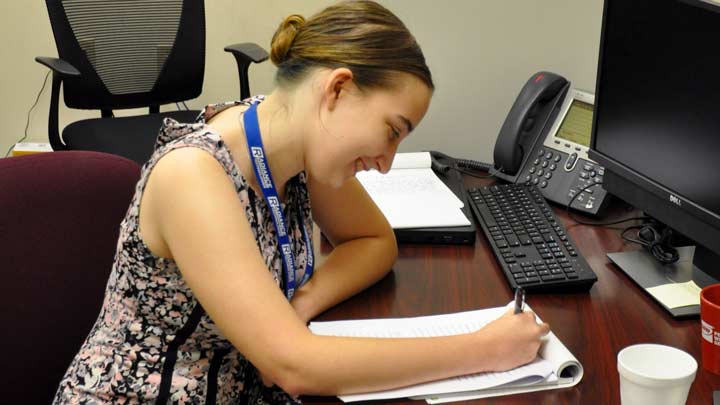 Of course it helps that both Bailey and his team have been so welcoming, putting their full support behind Bojarski and sharing their wisdom and expertise with her. "I am surrounded by intelligent people who are helping me to succeed at whatever is thrown at me," she says. "They take the time to really get to know you, and they make it clear that your presence and your work are appreciated." In turn, she has appreciated being given "real work" and not just busy work, knowing that her efforts will ultimately yield a tangible and lasting contribution once the book is published. "There are a lot of companies out there that can give you experience, but I would doubt that there are many which make you feel as welcome as Radiance does," she says. "I think Radiance is a great place to be an intern."

It’s a bittersweet irony, however, that the more effective she is at her internship, the sooner it will end. Indeed, with the book now close to completion, she is winding down her responsibilities at Radiance and beginning to focus more on her post-graduation plans. "I am currently waiting to hear back on my applications for the Marshall and Mitchell scholarships, which would allow me to get my master’s degree from either the UK or Ireland," she says. After that, she intends to pursue a professional career that will allow her to "foster a knowledge of and appreciation for history" in others, just as it was fostered in her all those years ago. "It’s my mission," says Bojarski, "to not only work in history, but also to share a love of history with others who may have not been taught about it in a way that worked for them."