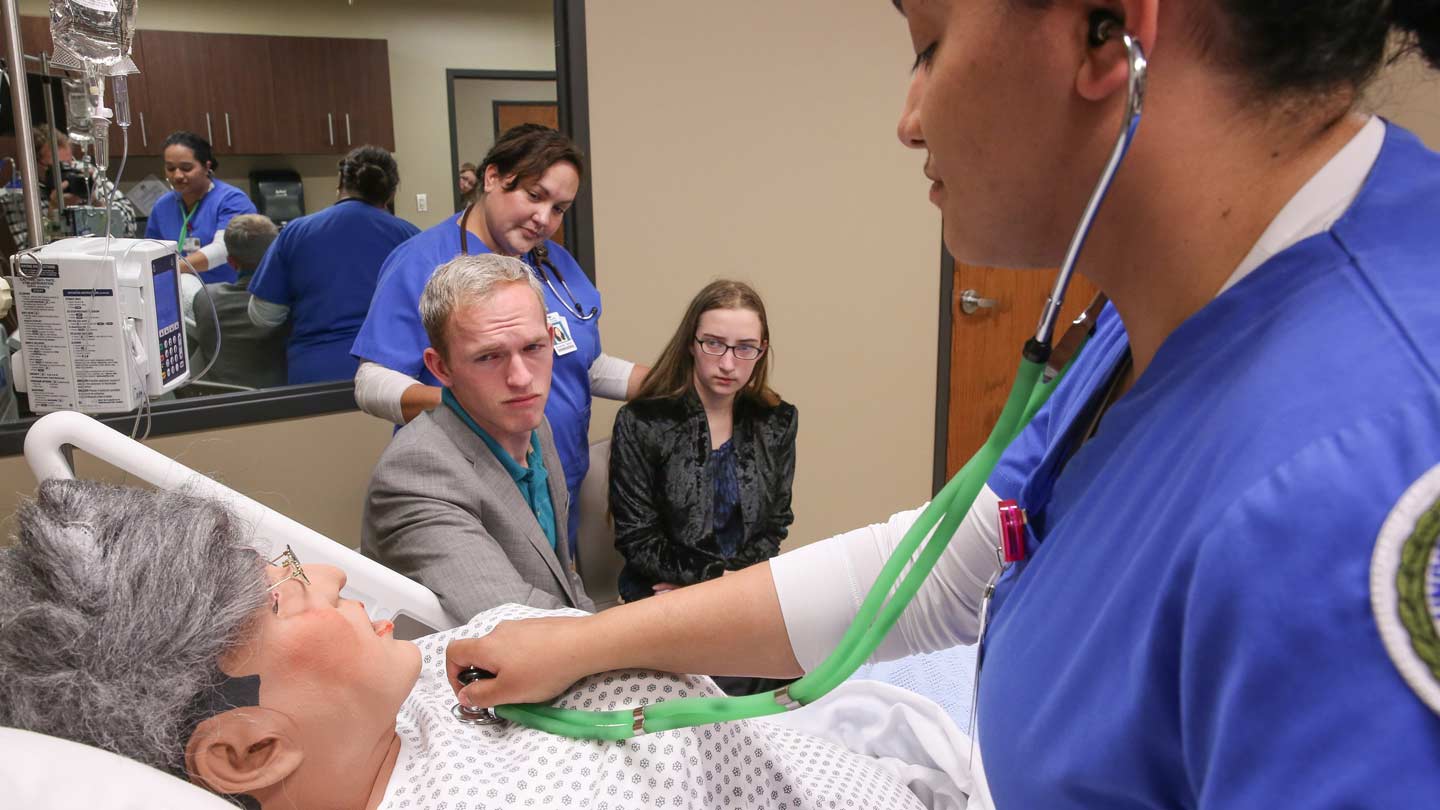 It's your first day as a brand-new nurse, and it isn't going well. Your patient, an elderly woman with a terminal illness on the hospice unit, is struggling to take a breath as her worried family members look on. A few hours into your shift, when she ceases breathing for long periods of time, you recognize it as a sign of impending death. And before long, she's gone. Now her husband and daughter are looking to you to figure out what just happened - and what they're supposed to do next.

It's a tough situation, and one that Maria Steele, clinical assistant professor of nursing at The University of Alabama in Huntsville (UAH), was concerned graduates of the nursing program weren't necessarily prepared for. "Previously, we haven't had an end-of-life simulation," she says. So when fellow clinical assistant professor Melissa Lonnergan approached her about creating a new one for this fall's Community Health Nursing course, Steele was enthusiastic.

As she began to lay the groundwork using the new simulation guidelines from the National Council of State Boards of Nursing, however, something kept bothering her. Typically, she explains, simulations require nursing students to work on a high-fidelity human patient simulator in a room set up to look exactly like a hospital room, while instructors and simulation assistants play the role of the patient and provide feedback over an intercom from behind a one-way mirror. "But the more I read, the more I kept seeing the word 'real,' - real experiences, real world," she says, adding that one of the expected outcomes of simulation experiences is to enhance real-world experiences in an interactive way.

That, in turn, got her thinking about a challenge that Dr. Marsha Adams, Dean of the College of Nursing, had given the faculty at the beginning of the semester: to undertake more interdepartmental efforts. "That's when I got the idea to get UAH's Theatre Program involved," she says. Rather than the instructors using different voices to represent different members of the patient's family over the intercom, she reasoned, theatre students could "make the experience more real" by actually playing the role of those family members.

I tried my best to be as realistic as possible to successfully provide the nurses with a productive learning environment to help them prepare for future encounters.

She first reached out to David Harwell, associate professor and director of UAH Theatre. He, in turn, put her in touch with Karen Baker, who teaches acting, voice, and diction. Baker was immediately on board. "I thought it was an excellent idea and absolutely worth doing," she says. The only challenge was finding the right students for the job. "This was a big project for Nursing, and I would have hated to not have people who were dependable," she says. "So I thought, who do I know who likes theatre and is reliable?"

She ended up with seven students - Meagan Bojarski, Kailey Burkhardt, Ben Shea, Michael King, Bakari Prigg, Brooklyn Kimbro, and Richard Southerland - a mix of theatre majors, minors, and those who "had been showing extra talent and dependability in my acting class," says Baker. Each was tasked with playing a family member of the dying "patient," with the men as the patient's husband and the women as her daughter. "That's what you'll see most often in real life," explains Steele.

With the theatre students in place, the simulations were rolled out over three days in late October. The nursing students were given a basic briefing on what to expect, but nothing more. "They were required to lean on their own assessment and critical thinking skills, and figure out how to handle what was going on with the patient and the family," says Steele. "We really wanted to challenge them with a scenario that a lot of nurses are uncomfortable with."

Baker, meanwhile, gave her theatre students pointers based on the dry run she had done of the simulations a few weeks earlier. "I instructed them not to go over the top if it wasn't called for," she says. "If the nursing students were calm and answering appropriately, then they were to remain good family members. But if the nurses seemed to not know what was going on or reacting in a way that seemed scary, then they could escalate the situation."

She also gave them some real-time feedback when she felt they were "holding back" out of empathy for their peers. "The theatre students know that the nurses are students as well, so sometimes they were afraid to take it too far," she says. "I would tell them, 'You're allowed to say something,' or 'You could have said something here'. So it was helpful to have multiple simulations back to back so they could refine their approach. They definitely took their notes."

Two that especially stood out were Meagan Bojarski, a sophomore history and English double major, and Kailey Burkhardt, a senior theatre and English double major. "Meagan did a good job of interacting with the student playing her father, helping to evoke emotion," says Baker. "And Kailey was effective at pushing the nursing students a little bit with her questions and with her ability to become emotional about what was going on." 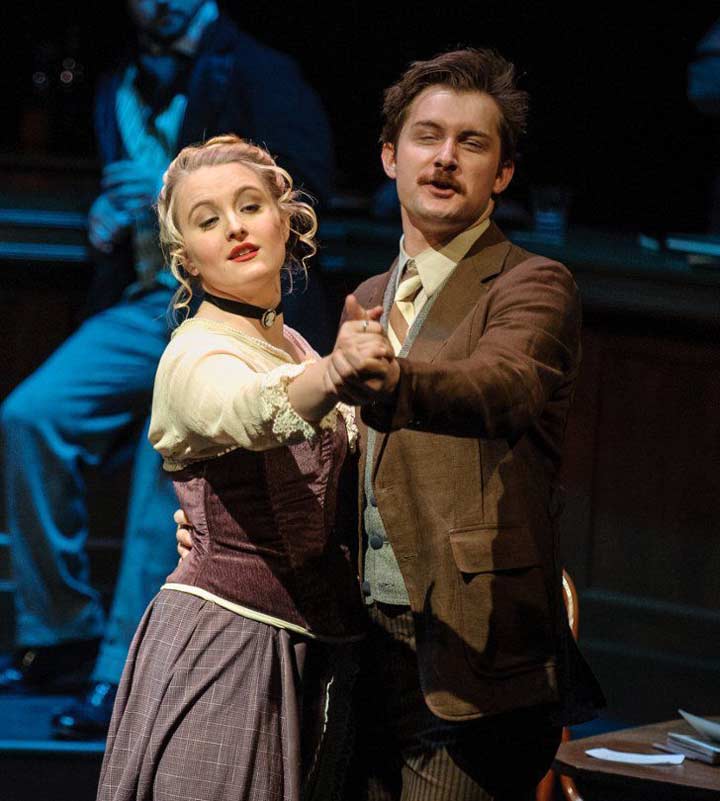 Kailey Burkhardt, who played the role of the patient’s daughter in the simulations, also appeared in UAH Theatre’s Picasso at the Lapin Agile last spring.

Both students say they drew on personal experiences to bring authenticity to the role. In Bojarski's case, she recalled her interactions with various nurses while spending time with her own loved ones in the hospital. "Some were very good with patients and their families and others who, though they knew the technical side, were gruff or dismissive with the families," she says. "There was definitely a difference between the two, and I wanted to do whatever I could to help there be more good nurses in the world."

Burkhardt's motivation was much the same. "I've had several family members who've been hospitalized," she says. "So I tried my best to be as realistic as possible to successfully provide the nurses with a productive learning environment to help them prepare for future encounters." She also welcomed the opportunity to build stronger ties between the students themselves. "Other departments have always been really supportive of what UAH Theatre is doing, so I saw this as a chance to show our support for what they're doing too."

That positive interaction didn't end with the simulations. Though originally unplanned, the theatre students ended up joining the nursing students afterward, to review the video recordings of the simulations and to discuss what had transpired. "I wasn't expecting the theatre students to participate in the debriefing, but it was serendipitous," says Steele. "The word 'real' came up with many of the students. And I think the nursing students took the feedback more to heart because it wasn't the faculty saying it, it was their fellow students."

Now both Steele and Baker are looking forward to the opportunity to collaborate on future projects. "It takes a lot of planning and coordination, but it was a real win-win," says Steele. "I can foresee that this would only enhance the other simulations that we do." Baker concurs. Even though the intent was to help the nursing students, she says, "it was a good exercise for the theatre students, because it gave them a unique situation without other actors to react to."

Needless to say, it's also a win for the patients who may one day receive care from a graduate of UAH's nursing program - Steele's original inspiration for the simulations. "I'm biased because my focus is on home health and hospice, but you can you say so many things as a nurse that can be damaging to the family and impede their ability to have peace at the end," she says. "I hope this experience enables the students to become the family's advocate instead, by knowing what to do and say and - just as important - what not to do in an end-of-life situation."