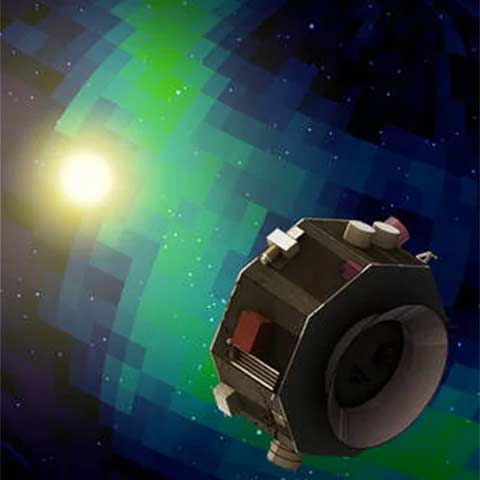 A team of astrophysicists that includes Dr. Gary Zank, chair of the Department of Space Science and the director of the Center for Space Plasma and Aeronomic Research at The University of Alabama in Huntsville (UAH), has been awarded $496 million by NASA’s Solar Terrestrial Probes (STP) Program to fund the Interstellar Mapping and Acceleration Probe (IMAP) mission concept. In keeping with the priorities outlined in the National Research Council’s “Decadal Strategy for Solar and Space Physics,” the mission will seek to advance critical scientific objectives of understanding our home in the galaxy, contribute to the fundamental understanding of the Sun-Earth system, and produce secondary observations critical to space-weather related societal needs.

“It was a lot of work to put this together – only two or three other groups submitted a proposal,” says Dr. Zank. “Ours provided a more coherent link, per the call, in looking at the energization of plasma close to the Earth, in the distant heliosphere, and in the interstellar medium, and in providing a better picture of how all of these vastly separated regions are connected. By measuring both phenomena that originate locally and those that originate in extremely distant regions, from which it may take neutral particles to propagate for five or ten years prior to the measurements being made, we will be able to couple local and distant heliophysics, in a way that has never been done before.”

Along with Dr. Zank, the IMAP team comprises principal investigator Dr. David J. McComas of Princeton University, as well as numerous leading space scientists from both the U.S. and abroad. The mission is both a continuation and an expansion of earlier heliospheric mapping efforts made by the Interstellar Boundary Explorer (IBEX) mission and the Advanced Composition Explorer, as well as measurements gathered by the Cassini INCA instrument and Voyager I and II. In particular, it seeks to further explore a previously unpredicted phenomenon discovered by IBEX: a narrow ribbon of energetic neutral atom (ENA) emissions coming from the outer heliosphere whose evolution suggests that the heliosphere’s galactic interaction is more dynamical than anticipated.

Unlike those other missions, however, IMAP combines 10 state-of-the-art measurement capabilities intended to produce new observations of ENAs from the heliospheric boundary region over an extended energy range and with enhanced sensitivity, and spatial and energy resolution. “We’ll make significant advances in that area over previous instrumentation,” says Dr. Zank, estimating that IMAP will show a 100-fold improvement over IBEX’s capabilities. The mission will also be able to produce high-sensitivity observations of other interstellar matter that traverses the heliosphere into the inner solar system, as well as other measurements required to monitor the solar wind, which then shapes the dynamics and structure of the outer heliosheath. “This is the one place in the universe that we can make detailed measurements of a local star – our sun – to discover how it behaves and interacts with the interstellar medium,” he says. “There’s no way in the next thousand years that we can study anywhere else like this in situ – a telescope can only give a very limited sense of the interaction of a star with its local interstellar medium, and one that is often attenuated by the interstellar medium between the telescope and the star.”

The spacecraft that will carry IMAP is set to launch in 2024, but this initial phase is dedicated to designing and beginning to build the instruments. As the team’s theory lead, Dr. Zank has been heavily involved in and has led much of the coordination of the underlying science that the instruments will explore. “You start with the big science goals and then you continue down to how a specific instrument or set of instruments will answer those science questions,” he says. The team will then continue to develop the mission science as launch approaches, ensuring that all of NASA’s key decision points are passed successfully for the mission. “It is incumbent upon us to make the right measurements to determine answers to the primary questions to be answered by IMAP,” he says. “After all, why else would you put almost $500 million into a mission?”

A member of the National Academy of Sciences and a recipient of the International Space Science Institute’s 2017 Johannes Geiss Fellowship, Dr. Zank is the principal investigator on an initiative to develop new predictive plasma-surface interaction technologies for the nation’s aerospace, manufacturing, energy, environment, and agricultural sectors. Entitled “Connecting the Plasma Universe to Plasma Technology in Alabama: The Science and Technology of Low-Temperature Plasma,” the project is funded by a $20 million, five-year grant from the National Science Foundation’s Experimental Program to Stimulate Competitive Research.