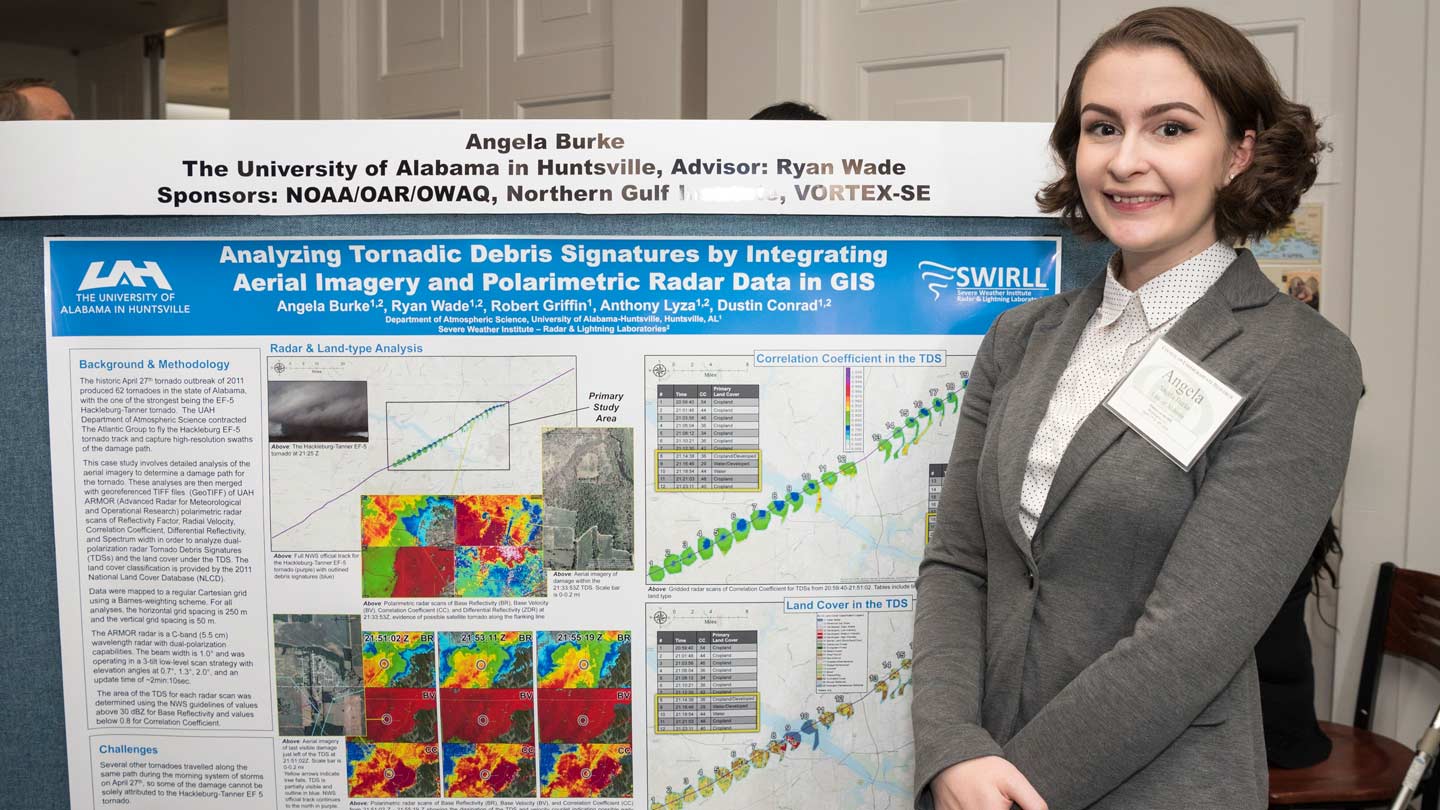 Angela Burke, a junior Earth system science major and NOAA Hollings Scholar, has presented her tornado research at several conferences and meetings, including the ultra-selective 2018 Posters on the Hill event in Washington, D.C. This summer, she will be working at NOAA’s Cooperative Institute for Research in the Atmosphere in Fort Collins, Colo., conducting research on GOES-16 satellite remote sensing.

It wasn’t hard for Angela Burke to narrow down her choices when she set out to earn her bachelor’s degree in a science, technology, engineering, or math (STEM) field. "Nothing in STEM held my interest except meteorology!" she says with a laugh. "I thought it was the coolest sounding option." Now, the Earth system science major is in her third year at The University of Alabama in Huntsville (UAH) and rapidly making a name for herself in her chosen discipline. "I didn’t know much about it when I started, but I’ve been doing research in the field for three years now," she says. "That’s not what I was expecting, but Ryan Wade, my advisor, told me from the beginning that there are a lot more opportunities than students!"

Her freshman year, Burke was selected to work on the Sally Ride EarthKAM project, a NASA program that uses a camera attached to the International Space Station to take high-resolution photographs of the Earth. "Rob was a guest lecturer in one of my classes, and I liked his presentation," she says, referring to assistant professor of atmospheric science Dr. Robert Griffin, who manages the science and operations portion of the EarthKAM mission. "I asked him afterward if he had any openings, and he suggested that I come in and interview for EarthKAM the following week." That stint lasted through the fall and spring, after which she applied and was accepted to UAH’s Research or Creative Experience for Undergraduates (RCEU) summer program.

"For the RCEU, I worked with Rob to create a set of Earth Science lesson plans to use with EarthKAM images, and since I was already at working at UAH over the summer, Ryan offered to let me start working on a research project for him as well," says Burke. "He had a backlog of high-resolution aerial imagery of the Hackleburg-Tanner tornado of April 27, 2011, and needed an undergraduate to start going through it." That effort ultimately yielded a research poster entitled "Detailed Tornado Damage Assessment using Integrated Aerial and Radar Observations: April 27, 2011 Case Study," which she presented at the 2016 Wernher Von Braun Memorial Symposium and at Alabama’s 2017 Higher Education Day in Montgomery, and another entitled "Analyzing Tornado Debris Signature and Damage Path Characteristics by Integrating Aerial Imagery and Polarimetric Radar Data in GIS," which she presented at the American Meteorological Society’s annual meeting in Seattle and its Conference on Radar Meteorology in Chicago.

They were excited to hear about all of the good work we were doing, and I was incredibly honored to represent UAH.

By her sophomore year, Burke had landed an enviable spot with NASA’s Short-term Prediction Research and Transition (SPoRT) Center, which shares observations and research capabilities with the National Oceanic and Atmospheric Administration (NOAA) and the National Weather Service. "With SPoRT I went to the American Geophysical Union’s fall meeting in New Orleans and presented my research on using satellite data to observe nighttime lights and to track power outages after a disaster event," she says. The following spring, she was awarded a NOAA Ernest F. Hollings Undergraduate Scholarship, which provides up to $9,500 a year in academic assistance for two years of full-time study as well as a 10-week, full-time paid internship at a NOAA facility. "Rob and Ryan encouraged me to apply, and I found out in May that I got it," says Burke, who is only the second student and first female from UAH to receive one. She’ll complete her internship this summer, conducting satellite remote sensing under the mentorship of research scientist Dr. Dan Lindsey at NOAA’s Cooperative Institute for Research in the Atmosphere in Fort Collins, Colo.

Burke’s junior year, meanwhile, has been spent both working as an undergraduate research assistant with SPoRT and continuing her severe weather research with Wade. Building on their previous research into the Hackleburg-Tanner tornado, the pair first assessed the aerial imagery gathered during the tornado to outline a damage path. They then merged the outline with gridded polarimetric radar scans and land cover classifications to analyze the characteristics of the tornado debris signature associated with the tornado. "Traditional non-polarimetric radar can only show us areas of rotation and high reflectivity, which can be associated with both a tornado on the ground doing damage and a rotating column of air that hasn’t touched down yet," she says. "By contrast, this signature is used to confirm that a tornado is on the ground and lofting debris. It’s called remote tornado detection, and its primary purpose is to improve tornado forecasting techniques in operational settings."

As she had the past two years, Burke submitted her poster on this research to the Council on Undergraduate Research’s Posters on the Hill, a competitive event wherein only 60 students from across the nation are selected to present their research to members of Congress. Only unlike the past two years, however, this time she was chosen. "I was the only student from Alabama," she says. "I think it was being a Hollings Scholar that put me over the edge this year." Upon being notified, she immediately reached out to Dr. Griffin. "I left my math class to go call him, because he’d encouraged me to apply every year," she laughs. "He was very happy for me, and I was very excited!" Her presentation took place on April 18 in Washington, D.C., where she met with representatives from both Senator Richard Shelby’s office and Representative Mo Brooks’ office. "I talked to them about newer radar technologies that we’re studying," she says. "They were excited to hear about all of the good work we were doing, and I was incredibly honored to represent UAH."

Now Burke is planning to turn that research into her senior capstone project. "We don’t have to do one, but because I want to get this published, doing the capstone would be a good way to set aside enough time," she says. She’s also applied to UAH’s Joint Undergraduate Master’s Program, which allows undergraduate students to take graduate-level courses that count toward both degrees, with an eye toward either pursuing her Ph.D. or a professional career in the field. Either way, she’s confident she’s made the right choice in pursuing meteorology – and in coming to UAH to earn her degree. "I learned a lot of new stuff I wouldn’t have otherwise, and it’s good for my resume, having done this much research already," she says. "The undergraduate research community at UAH is very unique in that way. I wouldn’t be where I am without Rob helping me get started in EarthKAM and Ryan helping me get started in research."