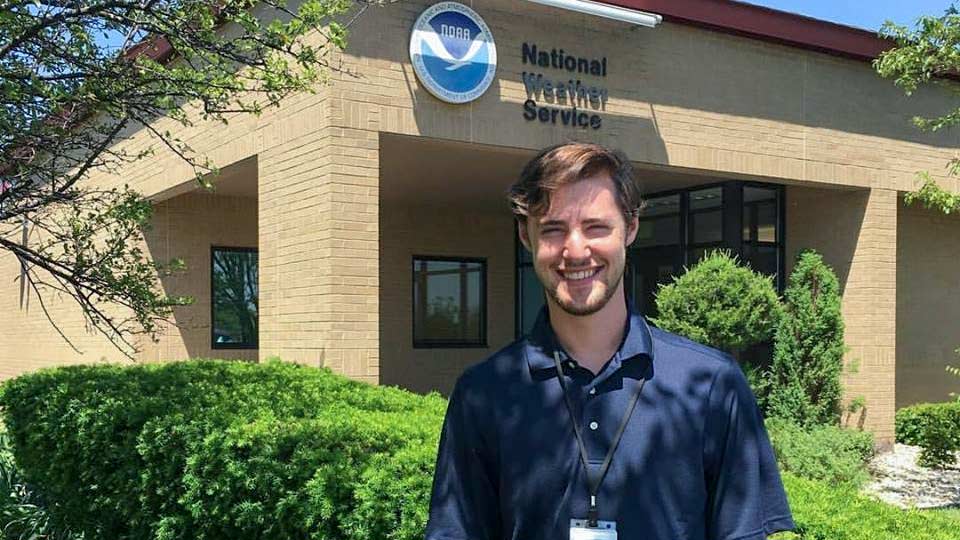 Senior Earth system science major and Hollings Scholarship recipient Adam Clayton spent the summer as an intern with the NWS Forecast Office in Chicago, where he researched tornado intensity.

Adam Clayton, a senior Earth system science major, became the first student at The University of Alabama in Huntsville (UAH) to receive an Ernest F. Hollings Undergraduate Scholarship from the National Oceanic and Atmospheric Administration (NOAA). The prestigious award provides up to $9,500 a year in academic assistance for two years of full-time study as well as a 10-week, full-time paid internship at a NOAA facility over the summer.

"Being the first is great, but I really want the people who come to UAH after me to know about the scholarship because it’s a great opportunity," says Clayton, who spent last summer as an intern with UAH’s Severe Weather Institute – Radar and Lightning Laboratories as part of the university’s Research or Creative Experience for Undergraduates program. "I definitely did not think I’d be doing something like this as an undergraduate!"

Awarded annually to just 120 undergraduates across the country, the Hollings Scholarship is dedicated to increasing undergraduate training in and public support for oceanic and atmospheric science, research, and technology; and to recruit and prepare students for teaching or public service careers in the fields of natural resources and science. Clayton was encouraged to apply by his advisor Ryan Wade, who had helped several other students land the scholarship at his previous institution, and supported by his professor Dr. Kevin Knupp and research mentor Tony Lyza.

"For my application I wrote about how I first got into weather, after a flood in my hometown, and how my passion had grown since then," says the Lawrenceburg, Tenn., native. He also solicited letters of recommendation from both Wade and Dr. Knupp, whom he is quick to thank for helping him land the prestigious scholarship. "Without them giving me the opportunity to do the research I’ve done the past two years, I wouldn’t be anywhere," he says. "I just think about how lucky I was to get an opportunity like that so early. They have done so much for me."

Following his selection for the scholarship, Clayton traveled to NOAA’s headquarters in Silver Spring, Md., for a one-week orientation. "All of the branches give presentations about what they do so you can figure out where you want to do your internship," he says. "The research I’ve done the past two years has been about a tornado outbreak that happened in the Chicago area in 2014, so I talked to people from the National Weather Service (NWS) about doing a project with them." NOAA subsequently approved that proposal, and this past summer, Clayton headed up to the NWS Forecast Office in Chicago to conduct research on tornado intensity in fulfillment of his internship requirement.

"Tornado intensity is usually assessed after the fact, but my goal was to figure out a way to assess it in real time to be able to give people more warning," he says. "We’ve done a great job giving more lead time with tornadoes that are easier to detect, but some are embedded in squall lines and can happen with very little warning. It would be great if we had 45 minutes of lead time instead of 15 or 20."

Using both a radar software and a sounding modeling software, Clayton compiled a database of tornadoes under the supervision of his internship mentors, science and operations officer Eric Lenning and lead forecaster Matt Friedlein. But despite working 40 hours a week for nine weeks, he wasn’t able to make as much progress as he had hoped. "I was only about to get about 200 tornadoes into my database and that’s really not a big enough dataset," he says. "But what I really got out of it was more knowledge about the steps I should take with my research going forward."

Over the last week of his internship, Clayton first presented his findings to his colleagues in Chicago before heading to NOAA’s headquarters, where he shared them with his fellow Hollings scholars and the administration’s scientists at the 2017 Science & Education Symposium. He then used the feedback he received to create a poster of his research, which he presented at the 38th Conference on Radar Meteorology. "I also want to write an article," he says, "but that will be on hold until after my senior year!"

For now he is continuing to add more tornadoes to his database and researching tornado intensity as part of his senior capstone project. He’s also working toward his master’s degree in atmospheric science as part of UAH’s Joint Undergraduate Master's Program (JUMP), with his sights set on earning a Ph.D. "I think working for the NWS would be interesting, but lately I’ve really gotten into the research side," he says. "I love tornadoes, but I hate what they can do to people’s lives, so I want to build something that will give them as much warning as possible."