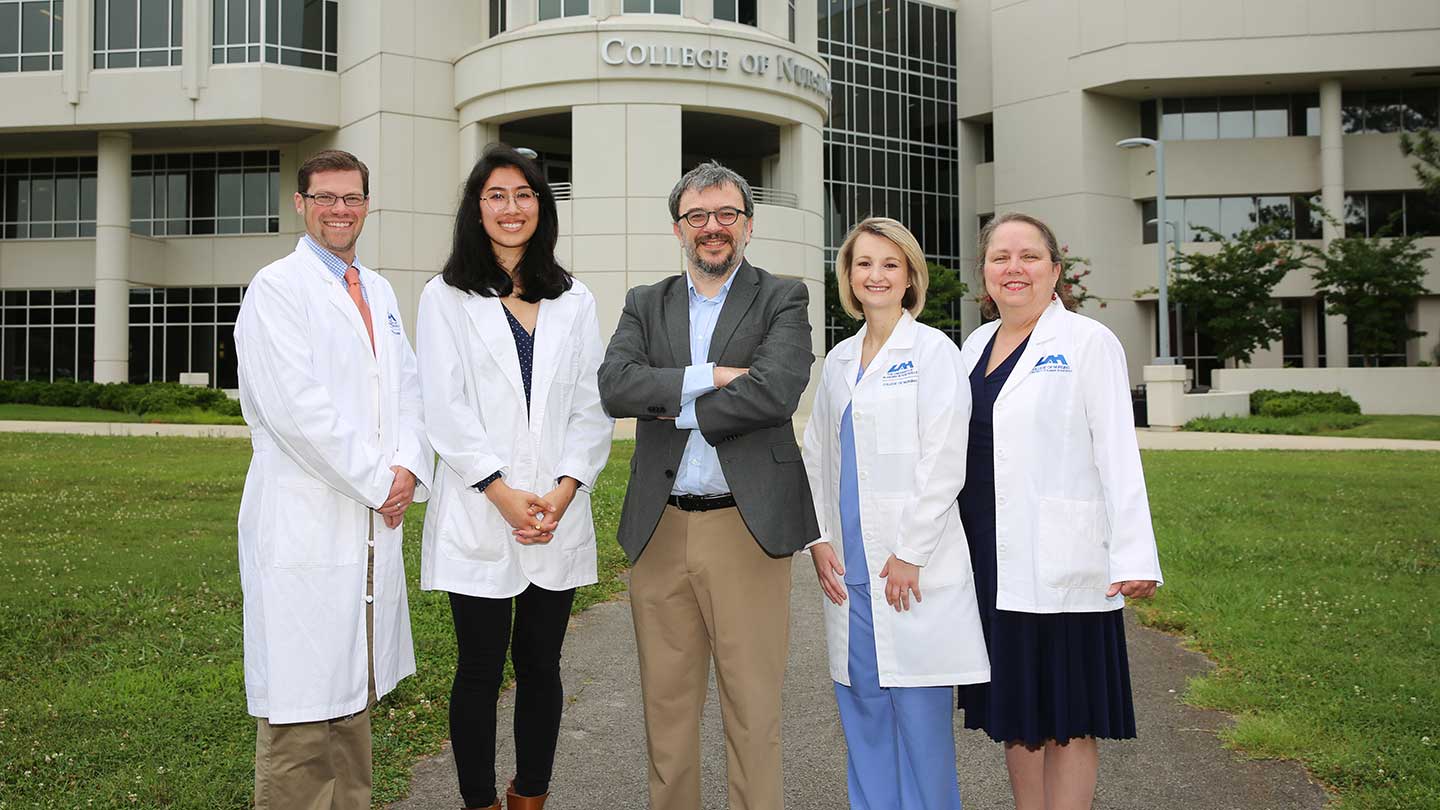 When it comes to understanding and treating orphan diseases, "it’s the beginning of a new era," says Dr. Jerome Baudry, the Pei-Ling Chan Professor of Biological Sciences at The University of Alabama in Huntsville (UAH). Until now, he explains, healthcare providers have tended to treat conditions that affect fewer than 200,000 people nationwide by "trying to fix what is broken." But with recent advances in clinical pharmacology, the approach is now shifting to identifying and eliminating the problem-causing toxins that accrete in the body as a result of the condition. "The complexity is a challenge, but the work that has been done recently is opening doors we didn’t even know existed," he says. "We really think we’re at a tipping point, clinically and pharmacologically, and in 10 years things will be vastly better than they are now."

Dr. Baudry, who joined the Department of Biological Sciences in August of 2017, is one of several key members of a team of UAH researchers trying to develop a more effective treatment for patients with one orphan disease in particular: tyrosinemia type 1 (TT1). Serving as the team’s lodestar and de facto leader is UAH alumna Dr. Elizabeth Barnby, a clinical associate professor in the College of Nursing and the mother of two children with TTI. "At first I attended UAH so I could understand the research studies," she says. "But during the time that I was getting my nurse practitioner degree, both of my children became more stable and there were less questions about what I could do for them." So with eye toward helping others, she stayed on to earn her Doctor of Nursing Practice degree. "I thought that if I had a doctorate then people would listen to me," she says with a smile. 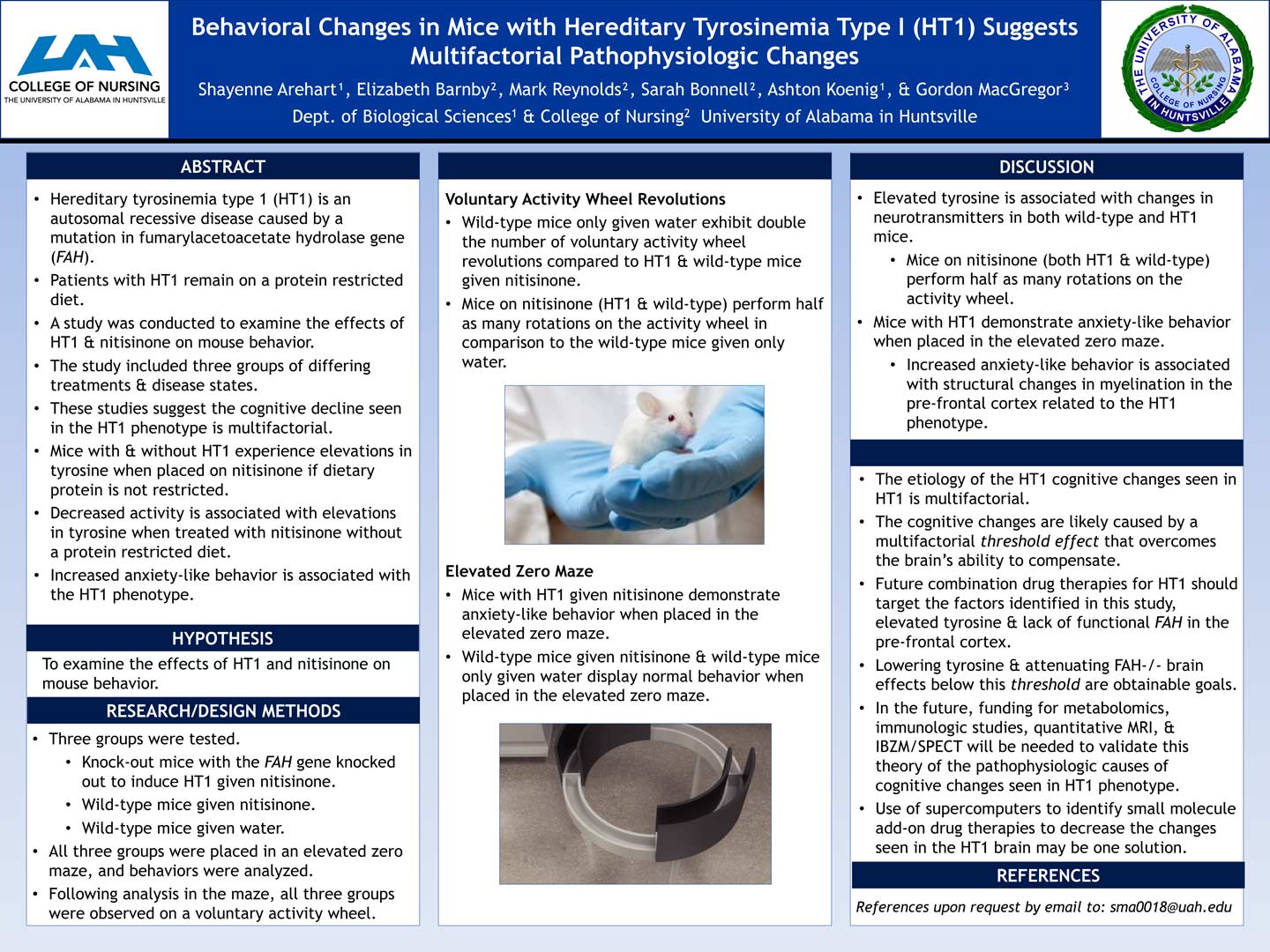 Arehart will present her research on the behavioral changes in mice with hereditary tyrosinemia type I in Asheville next month.

In 2015, Dr. Barnby joined forces with Dr. Bernhard Vogler, associate professor in the Department of Chemistry, and Dr. Gordon MacGregor, former assistant professor of biological sciences at UAH and now associate professor of pharmacology at the Alabama College of Osteopathic Medicine. The trio launched a yearlong study using mass spectrometry and nuclear magnetic spectroscopy to identify neurological modifying metabolites in the plasma, urine, and brain of a mouse model of tyrosinemia type 1. This was followed by the 2017 publication of a co-authored article, entitled "Abnormal Social Behavior in Mice with Tyrosinemia Type I is Associated with an Increase of Myelin in the Cerebral Cortex," which showed that mice with hereditary TT1 display abnormal social behavior as a result of the buildup of toxic metabolites caused by mutations in the fumarylacetoacetate hydrolase (FAH) gene associated with the disease.

"That discovery – that increased myelination caused by a mutated FAH gene could alter the brain’s biochemistry – was critical, and not just for patients with TT1," says Dr. Barnby. "There are other orphan diseases affected by hypermyelination caused by mutated genes, so now researchers working on multiple sclerosis or amyotrophic lateral sclerosis, for example, can take this information and run with it." As for those focused on TT1 specifically, she continues, it helps explain why the current treatment of the disease has been so challenging. "The drug that is used right now keeps them alive but it doesn’t address the behavioral aspects because it doesn’t cross the blood-brain barrier," she says. "That makes it harder for the patient to comply with the treatment, and if they don’t comply, it doesn’t work."

Which is where Dr. Baudry, a specialist in developing and applying methods and protocols for computational drug discovery, comes in. "At this point we are translating what has been found at the biological level to determine what is actionable at the pharmaceutical level," he says. "We’re going to give every possible route a chance, or even pursue new routes, until we can get to the point where using gene therapy to treat TT1 becomes an achievable goal."

Two undergraduate students are also providing invaluable support to the team: Shayenne Arehart, a pre-med senior biology major, and Sarah Bonnell, a senior nursing major, whom Dr. Baudry describes as "the best and brightest of our next generation of scientists." Arehart recently completed a research study, entitled "Behavioral Changes in Mice with Hereditary Tyrosinemia Type I Suggests Multifactorial Pathophysiologic Changes," with assistance from clinical assistant professor of nursing Dr. Mark Reynolds, Bonnell, UAH alumna Ashton Koenig, and Drs. Barnby and MacGregor. And Bonnell, a pediatric cancer survivor, has been integral to the creation and distribution of educational material for caregivers about how TT1 affects patients. 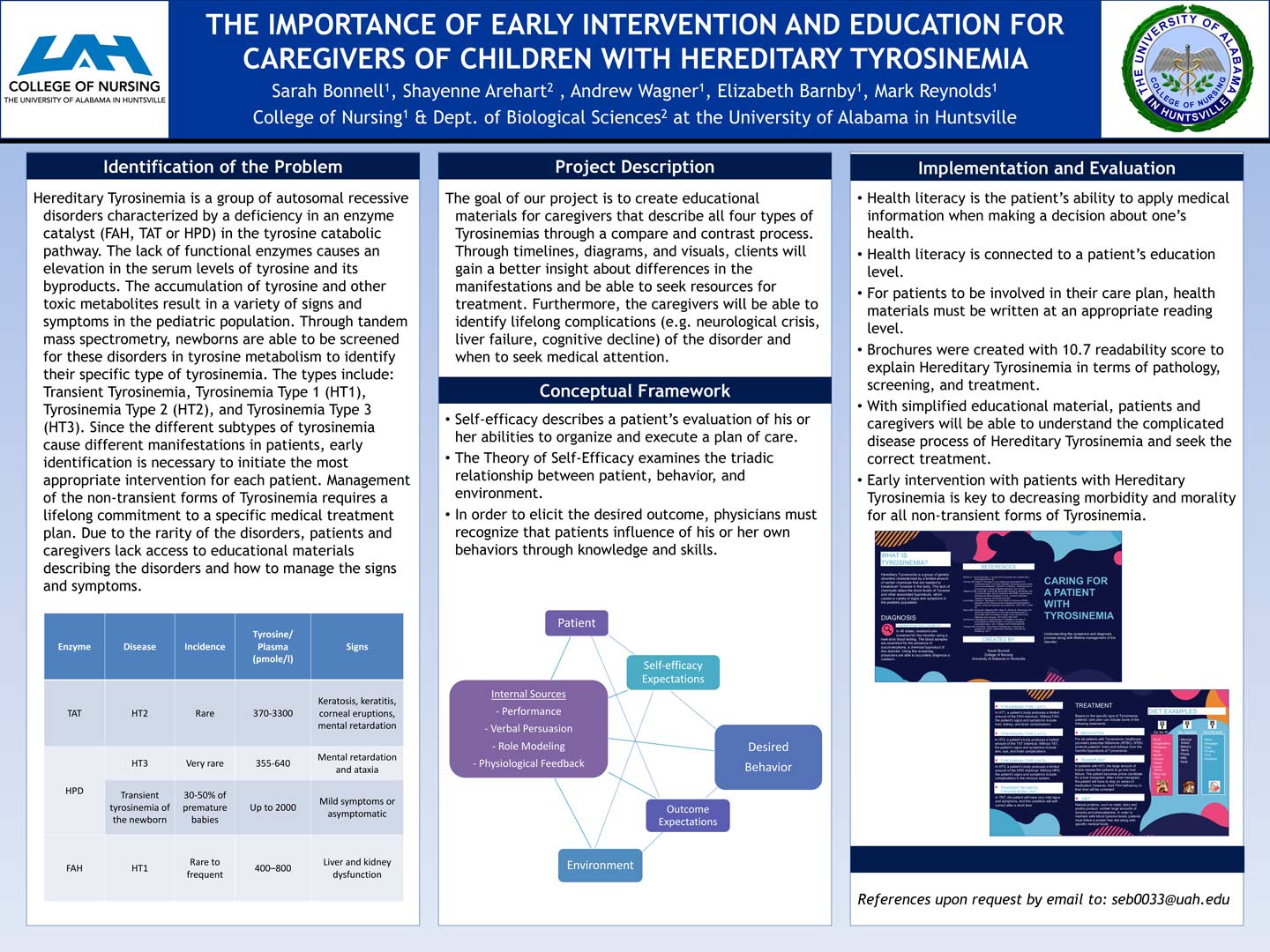 Bonnell will present her research on the importance of early intervention and education for caregivers of children with hereditary tyrosinemia in Asheville next month.

Both plan to present their research at next month’s 2019 Southeastern Regional Genetics Group Conference in Asheville, N.C. "We don’t want to keep any of our findings a secret," says Dr. Barnby of the team’s willingness to share the fruits of their labor. "We want to cure all diseases!" To that end, several of the team’s members now serve on the advisory board of the newly launched Tyrosinemia Society, a non-profit dedicated to advocating for patients with tyrosinemia and related disorders and connecting families, healthcare providers, researchers, and members of private industry who specialize in the treatment of orphan diseases. "The Society amplifies and leverages our discoveries," says board member Dr. Baudry. "It’s a level of organization that we didn’t have 5 or 10 years ago."

None of this would have been possible, however, without the support that the research team has received from UAH and the members of its community. "The faculty are passionate advocates for children with TT1, which I absolutely love," says Dr. Reynolds, who joined UAH’s College of Nursing in 2009 and was recruited to the team by Dr. Barnby soon after. "And UAH itself is special – big enough to be able to get the research done but small enough to be able to act quickly."

It’s a combination that lends credence to Dr. Baudry’s prediction of where the field will be in just 10 short years and gives hope to those battling orphan diseases like TT1. After all, when it comes to improving or even saving lives, there’s no time to lose.