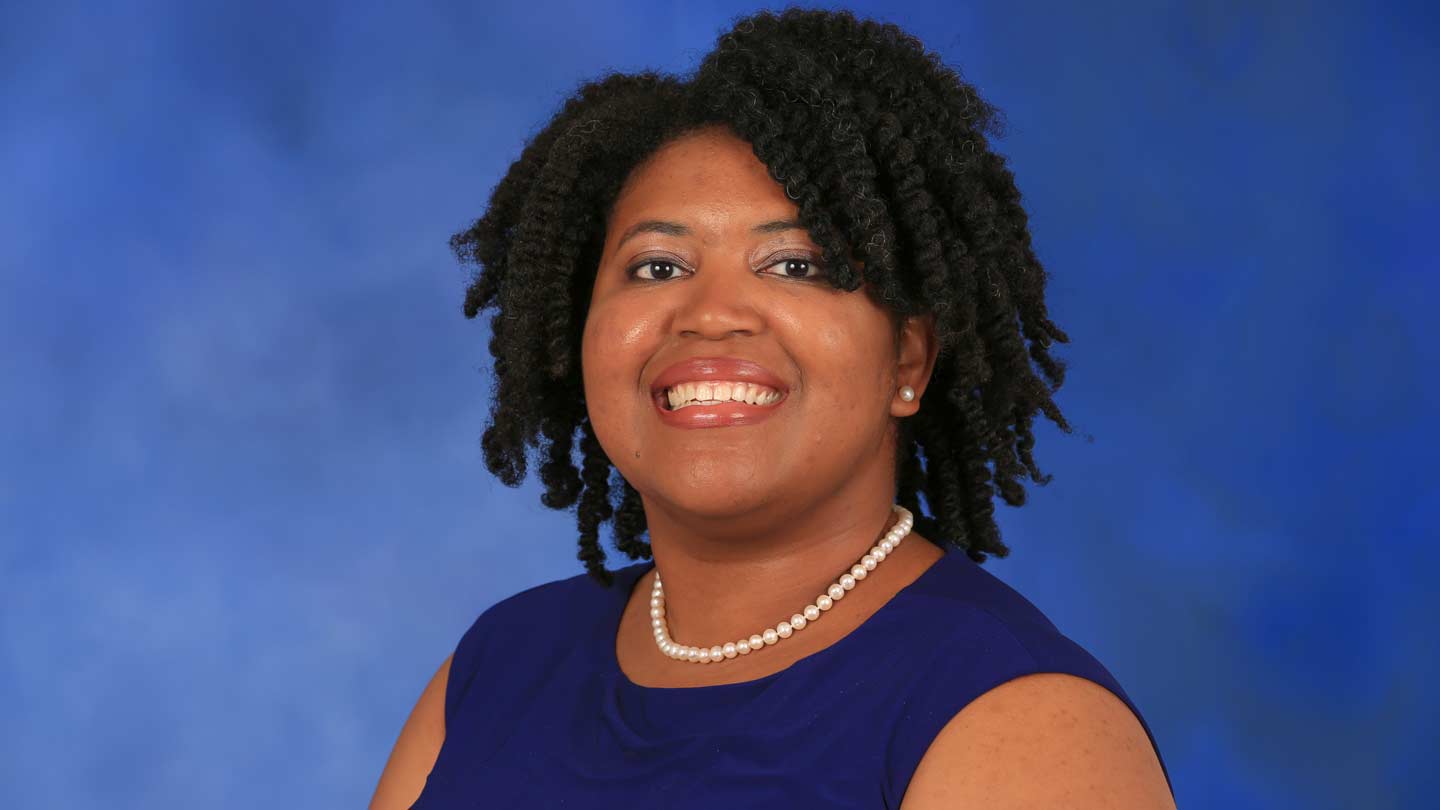 The list was compiled by Cell Mentor, an organization that strives to “help hardworking scientists answer the questions that will propel them through satisfying, challenging, diverse careers in the life sciences.” The list is made up of postdoctoral fellows, instructors and more.

“Black culture is distinct, and it has a heavy influence on American and global cultures,” states the Cell Mentor blog in framing the list recognition. “Likewise, Black talent is both ubiquitous and abundant, but the excellence of Black people is often obscured. The Community of Scholars formed this list of inspiring Black scientists. We are also here to dismantle the myth that outstanding Black scientists make up a small percentage of the scientific community.”

Dr. Love-Rutledge is one of 18 Black scientists and researchers recognized with this honor from the state of Alabama. She is also the first Black woman to earn a Ph.D. from The University of Alabama Department of Chemistry. Her area of special research at UAH includes diabetes and insulin resistance, as well as cognitive decline and aging. As the Principal Investigator in the Love-Rutledge Lab, her efforts are focused on applying biochemistry and molecular biology to understanding and preventing diabetes in adults, such as Type 1 Latent Autoimmune Diabetes of adults and Type 2 diabetes.

“I typically try to fly under the radar, so I was really surprised when someone shared the news with me,” Dr. Love-Rutledge says. “I see so many scientists that I look up to on that list: some of my mentors, Dr. Rena Robinson, Dr. Beronda Montgomery, Dr. E. Dale Abel and Dr. Betty Pace; some of my peers, Dr. Kensha Clarke, Dr. Isola Brown, among so many others. This is such a huge honor, and I am so grateful that the authors chose to recognize me. Since being listed I have been given the opportunity to engage with elementary school students in Canada, as well as interface with other future scientists, and it has been the best gift!”

A native of Moss Point, MS, Dr. Love-Rutledge was a Ronald E. McNair Scholar and earned an M.S. degree and Ph.D. from UA in Chemistry and Biochemistry, respectively. She says she developed a keen interest in science early on in childhood, an interest that has blossomed into a lifelong dream.

“Definitely. I think deep down I knew I liked science and I liked teaching, but it wasn't until I got to college that I knew how I wanted to combine those into a career.”

As someone growing up in Mississippi, she recalls the seemingly destined path she followed that brought her to UAH.

“At every step of my journey I have relied upon God to open doors for me,” she says. “I feel that I was led to be here. As a senior chemistry major, I attended an Instrumental Colloquium at UA. We met several of the faculty and saw the instrumentation. My advisor mentioned to one of the faculty that I was applying. I applied on Saturday, and I was accepted that Monday! I took that as a sign that this is where I was destined to be.”

Dr. Love-Rutledge learned about UAH in particular from Dr. Emanuel Waddell, Associate Dean of the UAH College of Science, while attending graduate school at UA.

“While there I was supported in ways that were confirmatory that I was operating in the will of God,” she says. “As I was nearing the end of my post-doctoral research, I attended the NOBCChE [National Organization for the Professional Advancement of Black Chemists and Chemical Engineers] national meeting and happened to run in to Dr. Waddell. He mentioned that UAH was in the midst of a search and encouraged me to apply, so I did. I was selected for this position, and it was the position that I have written about in my personal statements since I was a college junior. I get to teach some courses that are small enough to develop genuine mentorship relationships with undergraduate students and support them in their goals. It is wonderful.”

Dr. Love-Rutledge explains that what drove her to discover a passion for the fields of biochemistry and molecular biology originated with a curiosity that dates back to her early school days.

“I have always loved brainstorming and problem solving. I think I am a fixer by nature. In my ninth grade year my biology teacher allowed me to ask all the questions that I wanted, and that is where my fascination with biology began. I was so interested that the next year I took anatomy and physiology and started college as a biology major. I briefly left the biology major after my freshman year, but my experiences in organic chemistry, followed by my summer research experience in biochemistry as a Ronald E. McNair Scholar, sold me on the field of biochemistry and molecular biology. It was the best of both worlds! I could apply my analytical problem-solving skills to the world of biology.”

Her investigations led her to focus on vital areas of research that could beneficially impact health in ways that are particularly close to home, such as diabetes and insulin resistance.

“African Americans are disproportionately impacted by metabolic disorders,” Dr. Love- Rutledge says. “As a member of this group, I recognize the importance of identifying new targets to reduce the transition to diseases like type 2 diabetes (T2D) and nonalcoholic fatty liver disease (NAFLD) in response to diet-induced obesity. It is my ambition to help identify novel targets that can be used to prevent the onset of metabolic disease. As someone who has lost family members due to complications of diabetes, I want to prevent that heartbreak for others.”

Asked what it feels like to be a role model for those who dream of following in her path, her emphasis immediately shifts to her students.

“It means everything to me when a student rises to the challenges they are faced with and conquers them. One of the most affirming things a student has ever said to me was (paraphrased) I was so excited to be in your class, as I have never been taught by a professor who looks like me. For years I wrote in my personal statements that I longed to be what I had never had. I have never been taught chemistry by an African American woman, and now I am that person for so many of my students. The interactions that I have with some of my students and mentees has been worth all of the difficult parts of my path. I take my role seriously and will continue to not only be a role model but also an advocate for those future students. I see myself and my journey in so many of them.”

As for advice she would give to young women and women of color about pursuing careers that have tended to be male dominated like the STEM fields and sciences, she feels intuition should play a big role.

“Listen to your gut. Some things, places and people may be a part of your journey for a season, then let them/it go when it is time,” Dr. Love-Rutledge says. “Your gifts will make room for you, and sometimes that means taking steps that you don't feel prepared for. Trust your abilities. Everyone is not your ally, but you will find allies. If you put in the work, it will all work out in the end. I see a bright future in the STEM students I interface with. We still have a ways to go, but slowly but surely institutions around the country are starting to dismantle the systems that have disproportionately impacted those underrepresented in academia and in STEM. I know that I stand on the shoulders of a generation of scientists who were kept out of programs because of race and gender, and I hope that with my generation we can widen the pipeline and retain the brilliance of the generation of scientists and engineers that are blossoming right before our eyes. I will do all that I can to prevent the systems from dimming their light.”

And when she considers what she sees in store for her personal future, she once more turns her focus outward toward helping others make the climb.

“As a graduate student, I saw myself as a bridge builder. I wanted to guide students to the path and help to bridge them to uncharted territory. It is my personal hope that as my career continues my mentees and students will be recognized as preeminent and distinguished scholars who are solving the world’s greatest challenges. Nothing brings me greater joy than to know that the time that I invest in my students pays off and leads to them succeeding in their endeavors.”