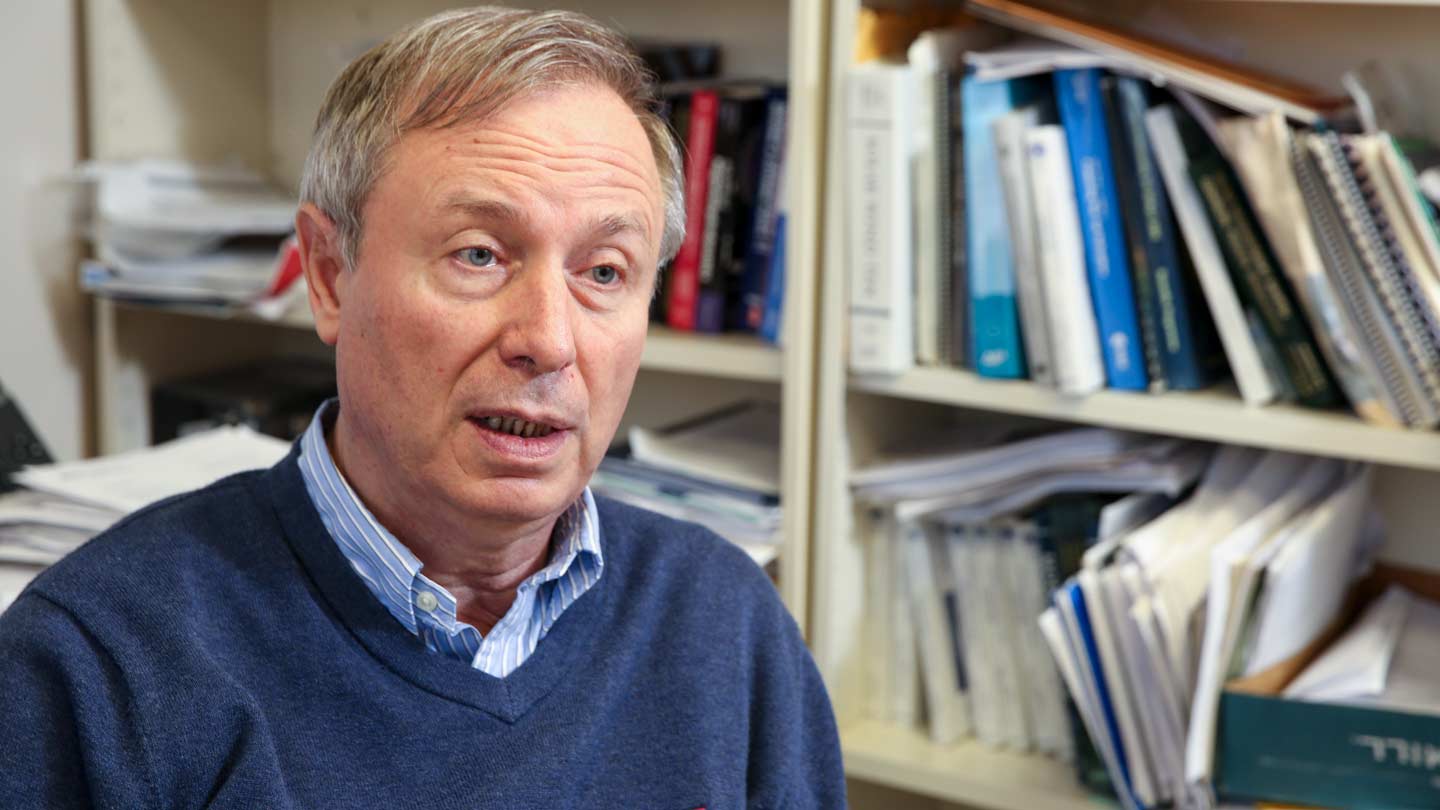 Dr. Nikolai Pogorelov is a professor in UAH’s Department of Space Science and a researcher with UAH’s Center for Space Plasma and Aeronomic Research. His co-authored paper shows that the disruption of the heliopause can be attributed to magnetohydrodynamic instability, possibly accompanied by magnetic reconnection.

"Three-dimensional Features of the Outer Heliosphere Due to Coupling between the Interstellar and Heliospheric Magnetic Field. V. The Bow Wave, Heliospheric Boundary Layer, Instabilities, and Magnetic Reconnection" originally appeared this past August in the Astrophysical Journal, a publication of the American Astronomical Society. But the paper, whose co-authors include two researchers at The University of Alabama in Huntsville (UAH), has recently received renewed attention thanks to its unique insights into physical phenomena occurring at the heliospheric interface.

Dr. Nikolai Pogorelov and Dr. Jacob Heerikhuisen are both faculty members in the Department of Space Science and researchers with UAH’s Center for Space Plasma and Aeronomic Research, of which Dr. Heerikhuisen serves as the associate director. Their previous collaborations include, among dozens of others, co-authored papers on κ-distributed protons in the solar wind and their charge-exchange coupling to energetic hydrogen and the effect of new interstellar medium parameters on the heliosphere and energetic neutral atoms from the interstellar boundary.

Much of their work involves solving complex mathematical models of physical processes using supercomputers, in particular Blue Waters, as part of the National Science Foundation’s Petascale Computing Research Allocation Program. Dr. Pogorelov, who serves as a member of the Blue Waters’ Science and Engineering Team Advisory Committee, says he and his coauthors are grateful for the opportunities the program provides.

For this study, the researchers narrowed their focus on the heliopause, the boundary between the solar wind and the local interstellar medium. More specifically they were hoping to explain the observational data obtained from Voyager 1 and Voyager 2, NASA space probes launched in 1977, and the Interstellar Boundary Explorer, a NASA satellite launched in 2008.

"We needed to increase the grid resolution tremendously, to ‘zoom in to’ the region near the heliopause," says Dr. Pogorelov, a 2017 fellow of the American Physical Society. "So we used adaptive mesh refinement in our simulations of the solar wind interaction with the local interstellar medium." The team also employed 3-D magnetohydrodynamic plasma/kinetic neutral atom simulations, and together those techniques enabled them to show that a distinct boundary layer of decreased plasma density and enhanced magnetic field should be observed on the interstellar side of the heliopause.

"We were able to distinguish the plasma density increase across the heliopause from the further density increase in the heliospheric boundary layer," he says. "And we demonstrated that the simulated density behavior in the heliospheric boundary layer agrees well with the measured frequency of plasma waves detected in the local interstellar medium by the plasma wave instrument aboard Voyager 1."

Generally speaking, the plasma frequency should continue increasing until the spacecraft leaves the heliospheric boundary layer. However, time-dependent effects such as the solar cycle may result in periods of nearly constant plasma frequency, which in turn are then further overtaken by the general trend of increasing density. Dr. Pogorelov and his team argue that the heliospheric boundary layer is not the result of plasma anisotropy, as found in plasma depletion layers at Earth magnetosphere; rather, it is due to charge exchange between neutral H atoms and protons.

From the perspective of the local interstellar medium, the plasma density increases as the local interstellar medium approaches the heliopause until it enters the heliospheric boundary layer. "The influence of charge exchange on quantities ahead and behind a possible shock inside a bow wave was discovered a few decades ago," he says. "But we have been able to distinguish the contribution of a shock-related increase to a more gradual increase inside a so-called bow wave." The results produced by the model the team used were consistent with remote and situ observations from IBEX, Ulysses, and Voyager spacecraft. "It has been demonstrated that the contribution of a sub-shock is usually small compared with the overall density increase for realistic solar wind and local interstellar medium properties."

The model’s simulations were also able to show that there is no "jump" in magnetic field magnitude across the heliopause by reproducing the rotation of the magnetic field vector across the heliopause, in keeping with Voyager I observations. "The unstable behavior of the heliopause shows that Voyager 1 may have been crossing the consecutive regions occupied by the solar wind and local interstellar medium plasma on the way into the interstellar space," says Dr. Pogorelov. "This scenario is in qualitative agreement with the Voyager I observations of a number of consecutive increases and decreases in the galactic cosmic ray flux."

With this knowledge in hand, the researchers are now looking ahead to the next phase of their study. "Our future work is aimed at investigating the effect of solar wind and local interstellar medium turbulence on magnetic reconnection and instabilities near the heliopause," says Dr. Pogorelov. "In particular, we want to use measurements of turbulent properties from Voyager 1 and Voyager 2, which are available with very high accuracy, and use these data in simulations. We can also create a model that describes the properties of turbulence." The result, he continues, "will be a combination of observation, theory, and simulation" – and it should no doubt yield equally exciting insights into the heliopause.