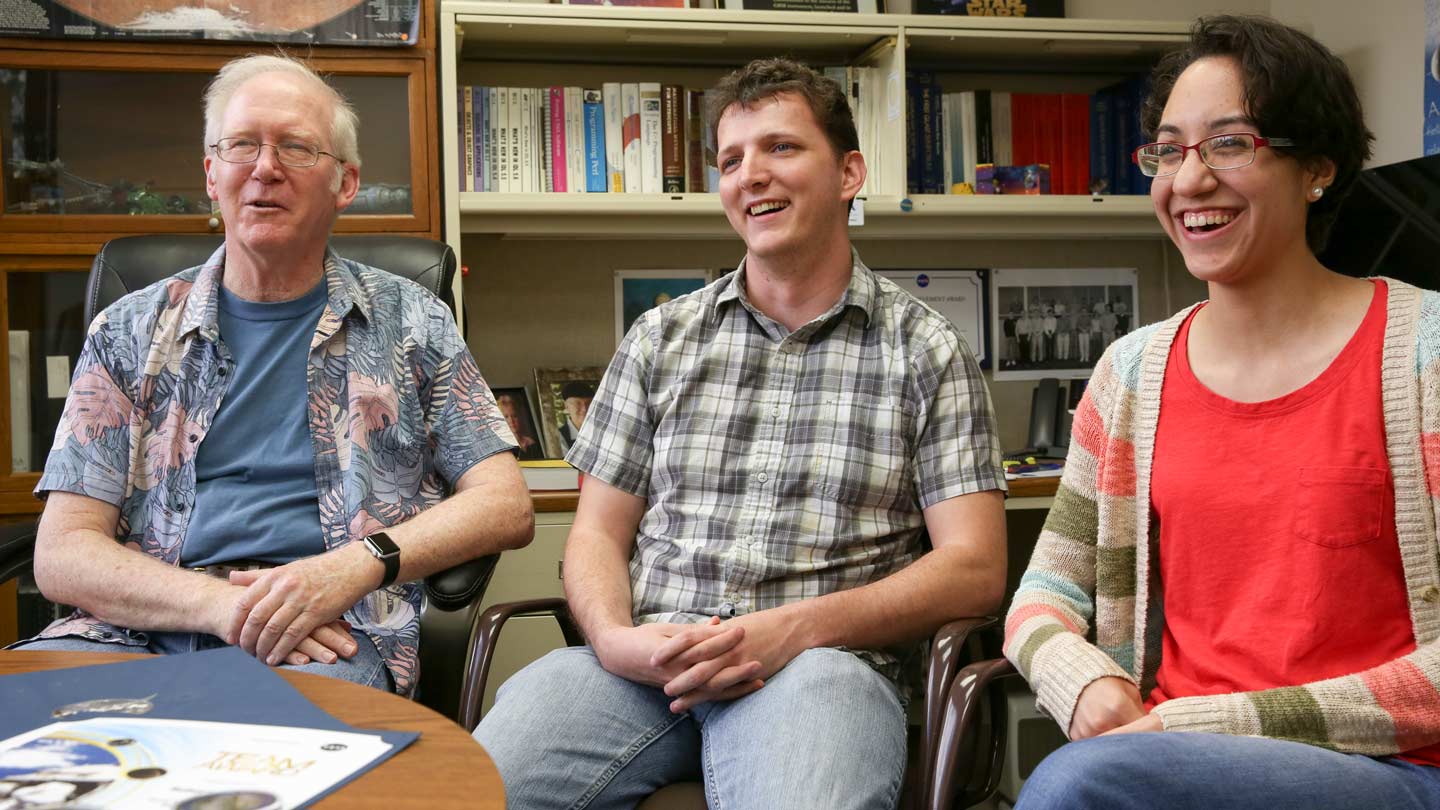 Dr. Robert Preece and graduate students Matthew Stanbro and Rachel Hamburg were part of a UAH team that received a NASA Space Flight Awareness Team Award, which recognizes groups that have demonstrated exemplary teamwork while accomplishing a particular task or goal in support of the human space program.

On the morning of August 17, 2017, Rachel Hamburg, a master’s student in the Department of Space Science at The University of Alabama in Huntsville (UAH), received a text message from a fellow graduate student at the Laser Interferometer Gravitational-Wave Observatory (LIGO). "He told me to get ready because LIGO was about to send out an alert," she recalls.

That alert led to a once-in-a-lifetime discovery – the first detection of gravitational waves from colliding neutron stars – and Hamburg was at the center of it.

"When we see neutron stars in the galaxy that are orbiting each other, they’re losing energy through gravitational radiation, causing them to orbit faster and closer together. In other words, they’re destined for a collision," explains Dr. Robert Preece, an associate professor in UAH’s Department of Space Science and a co-investigator for the Gamma-Ray Burst Monitor (GBM) on NASA’s Fermi Space Telescope. "That collision may happen billions of years after those stars were formed, but if we got lucky, we would see one – and the way we would know is that a gravitational wave antenna like LIGO would see it first." On that summer day, the stars aligned.

Hamburg, part of the UAH Center for Space Plasma and Aeronomic Research (CSPAR) team, checked the GBM page and saw evidence of a gamma-ray burst. 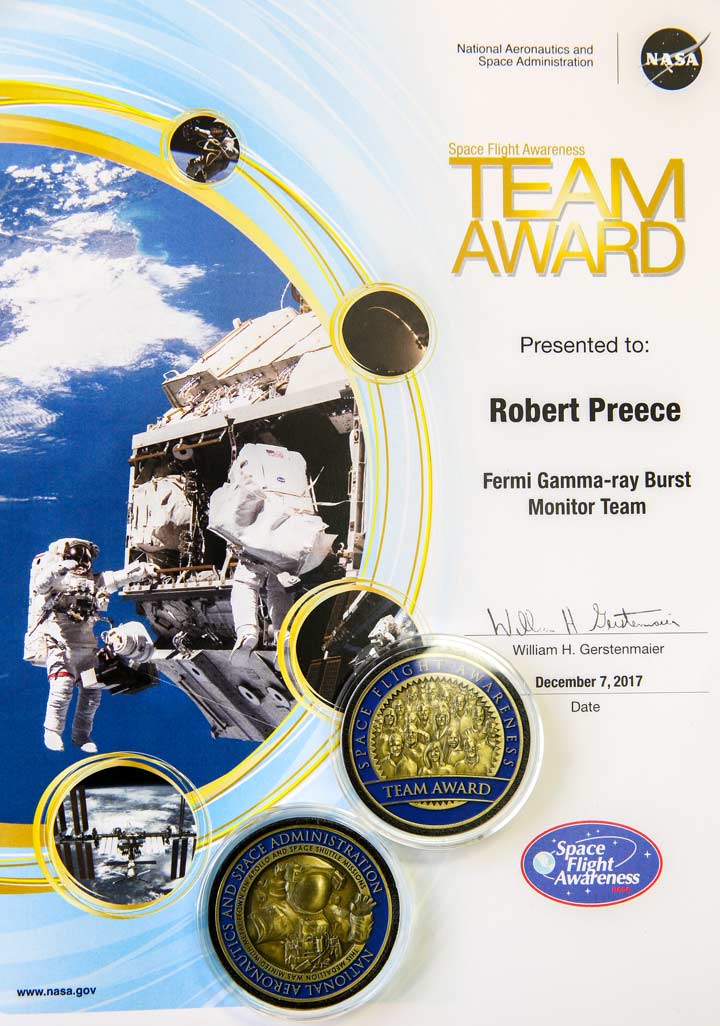 "It was extremely short and it was right before we entered a region that we call the South Atlantic Anomaly (SAA) where there’s a high flux of particles that can sometimes cause fake triggers," Hamburg says. First, she checked to make sure this wasn’t the case. Then she started to work on localizing the burst with other team members. "I was jumping up and down," says Hamburg. "People have said for years and years that neutron star mergers would create gamma-ray bursts, and I’ve heard people talk about that the whole time I’ve been at UAH. Then to see it right before my eyes, I mean, that’s very exciting!"

The CSPAR team sent out a formal GBM notice. Then, LIGO sent out an improved localization, and soon observatories all over the world pointed their telescopes at the event. Their combined data narrowed the GBM’s initial bull’s eye down to a pinpoint.

"Once we had confirmation, it was then a matter of putting together all the observations into a paper and getting it all published," says Dr. Preece. But that couldn’t happen right away.

"We all have a confidentiality agreement with LIGO not to release anything until they also release simultaneously," explains UAH Ph.D. student Matthew Stanbro, who played an integral role in coordinating and fact-checking the multi-authored publication. Not only could they not announce their discovery, they couldn’t even discuss the event with anyone outside of the team. Instead, they watched as the world speculated. "We couldn’t say anything, but it was fun to see rumors pop up," says Stanbro.

Finally, in a well-staged effort that included overnight peer-reviews and revisions, the team’s co-authored paper, "An Ordinary Short Gamma-Ray Burst with Extraordinary Implications: Fermi-GBM Detection of GRB 170817A" was published on October 16, 2017, in a special issue of the Astrophysical Journal Letters. A press release from NASA headquarters went out the same day.

"We triggered this whole thing," reflects Dr. Preece. "And for our role in this Earth-shaking, or galaxy-shaking – quite literally, because it’s gravitational waves – observation, we were given the NASA Space Flight Awareness Team Award."

The award, which recognizes groups that have demonstrated exemplary teamwork while accomplishing a particular task or goal in support of the human space program, was presented at a ceremony on December 7, 2017, at NASA’s Marshall Space Flight Center. NASA astrophysicist, team lead, and UAH alumna Dr. Colleen Wilson-Hodge accepted on behalf of the GBM team, which consisted of UAH research scientists and graduate students, as well as members of CSPAR and the Department of Space Science. Along with a certificate, the award recipients were given a medallion minted with metal flown on Apollo and the space shuttle missions.

"I’m extremely happy with this team’s work," says Dr. Preece. "We’ve had a number of really great graduate students, and continue to do so, and they’re really bringing recognition to the country – and the world – that UAH has an excellent space science program," says Dr. Preece.

"That’s what I think is most exciting about being a graduate student in the program," adds Hamburg. "You have a direct connection to NASA right here. We’re participating in leading research and making these discoveries, and it’s such a great opportunity for students who are interested in astronomy."