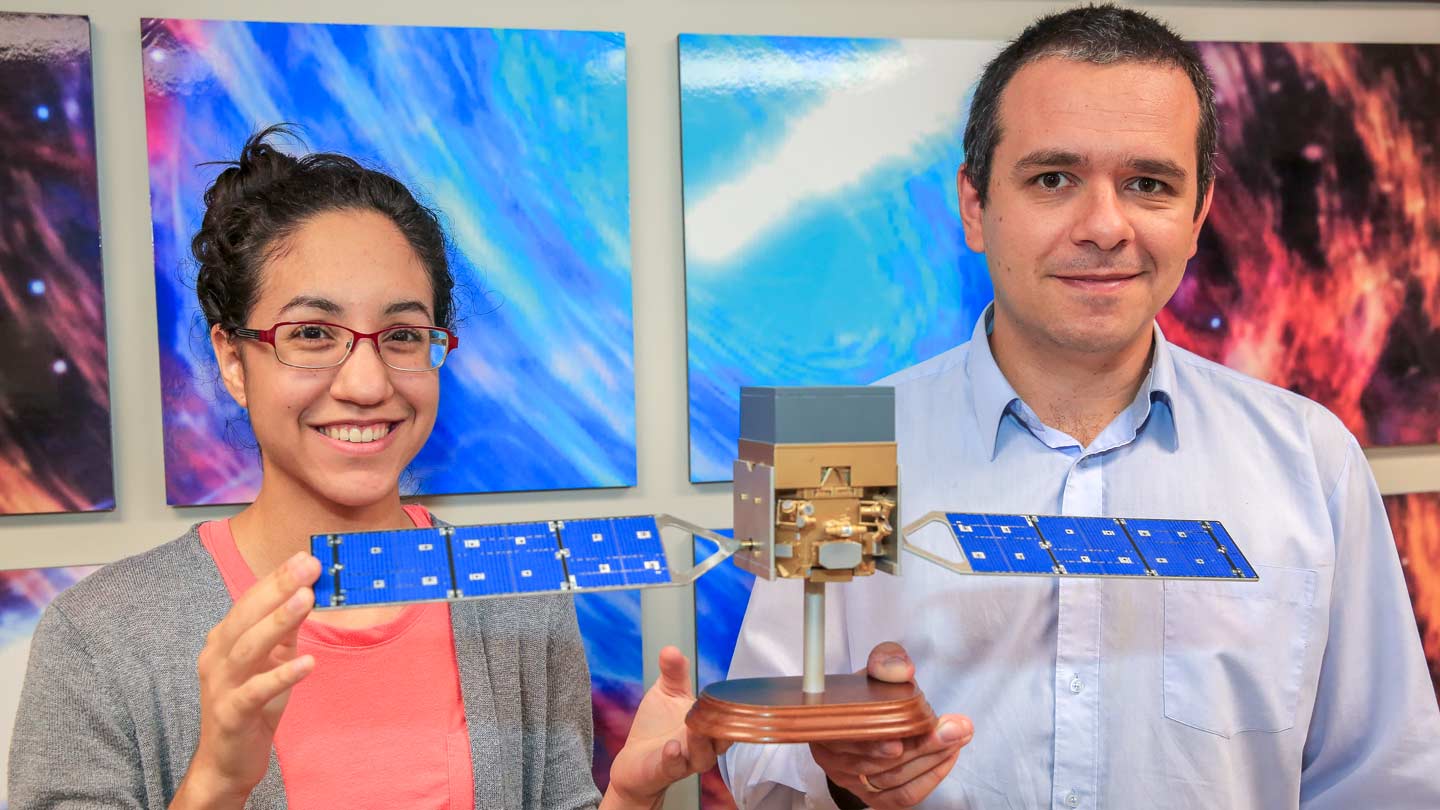 Ms. Rachel Hamburg, a master’s student in UAH’s Department of Space Science, and Dr. Péter Veres, a postdoctoral fellow at UAH’s CSPAR, both serve as burst advocates for the GBM Team. As a result, they were two of the first to know of the near-simultaneous detection of gamma rays and gravitational waves from a distant pair of merging neutron stars.

A gravitational-wave discovery on Aug. 17 is the first to produce light detected by observatories in space and on the ground. Just 1.7 seconds after the gravitational waves rushed past Earth, NASA’s Fermi Gamma-ray Space Telescope caught high-energy light from an explosion associated with the event. NASA’s Swift, Hubble and Chandra missions, along with dozens of ground-based observatories, later captured the fading glow of the blast’s expanding debris.

"This is extremely exciting science," says Paul Hertz, Astrophysics Division director at NASA Headquarters in Washington, D.C. "Now, for the first time, we’ve seen light and gravitational waves produced by the same event. The detection of a gravitational-wave source’s light has revealed details of the event that cannot be determined from gravitational waves alone. The multiplier effect of study with many observatories is incredible."

The outburst took place in a galaxy called NGC 4993, located about 130 million light-years away in the constellation Hydra. The source was a pair of neutron stars – crushed leftover cores of exploded supernovas that have a mass 10 to 20 percent greater than the sun but a size no bigger than a large city. 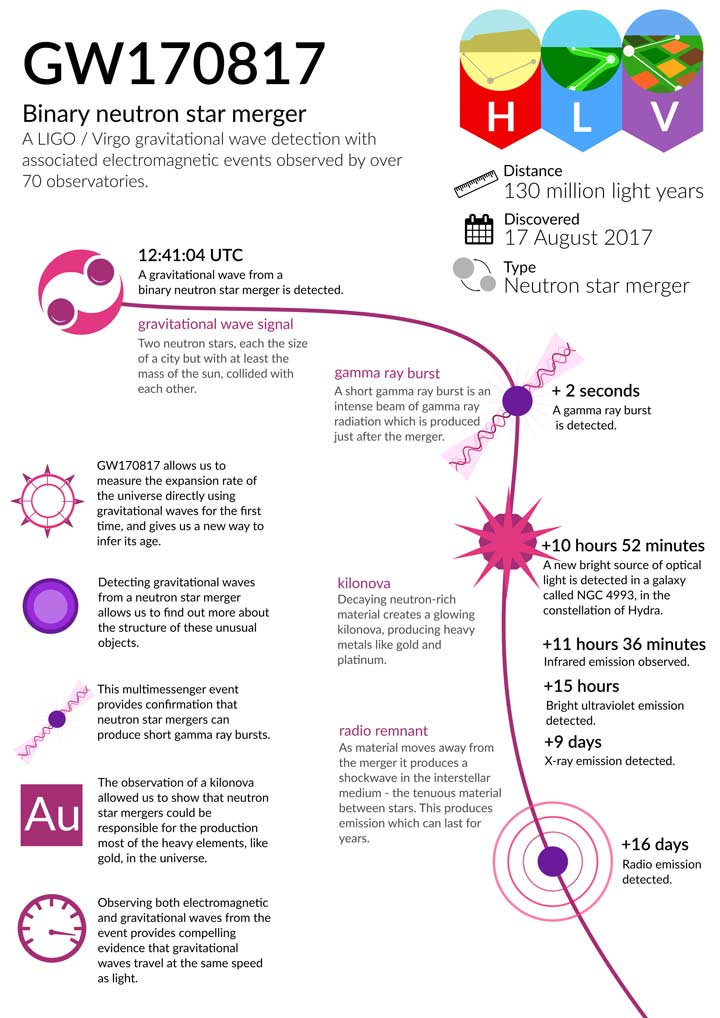 As the two stars drew closer, whirling around each other hundreds of times a second, they broke apart and produced a spectacular short-lived eruption called a gamma-ray burst (GRB), which was detected by Fermi’s Gamma-ray Burst Monitor (GBM) and by the anti-coincidence shield of the spectrometer aboard INTEGRAL, another gamma-ray mission. The gravitational waves produced by the revolving neutron stars rattled Earth’s space-time and were picked up by the LIGO facility in Hanford, Wash., shortly after 8:41 a.m. EDT on Aug. 17. The same signal was later identified in the twin detector in Livingston, La., while the non-detection by the Virgo facility in Italy improved the location determination.

"Scientists have long thought that short GRBs resulted from merging binaries, like two neutron stars or a neutron star and a black hole, but the evidence hasn’t been clear cut," says Dr. Michael Briggs, assistant director of the Center for Space Plasma and Aeronomic Research (CSPAR) at The University of Alabama in Huntsville (UAH) and a member of its Gamma-Ray Astrophysics Team. "Now, however, this joint detection of gamma rays and gravitational waves – called GRB 170817A and GW170817, respectively – confirms binary neutron star mergers as a progenitor of short gamma-ray bursts."

Moreover, he continues, new information can also be gleaned from the observed time delay between them. "The +1.7 second delay between GRB 170817A and GW170817 enables us to show that light and gravitational waves travel at the same speed, differing by no more than several parts in 10 to the 14th and to constrain properties of the gamma-ray burst," he explains. "With the distance determined by LIGO/Virgo and other observers, we know that GRB 170817A was extremely dim and only detectable by GBM because it was very close for a GRB."

Gravitational waves are ripples in the fabric of space-time produced by massive, accelerating bodies, such as orbiting black holes or neutron stars, and were predicted by Albert Einstein’s general theory of relativity in 1915. They were directly detected for the first time on Sept. 14, 2015, by the National Science Foundation’s Laser Interferometer Gravitational-Wave Observatory (LIGO), a discovery for which the observatory's architects were awarded the 2017 Nobel Prize in physics.

Fermi’s GBM was the first to offer a hint that something extraordinary was happening, reporting a short GRB seconds after detecting it and setting into motion a flurry of activity to confirm its connection to the neutron star merger. "This was the event the GBM team had been working toward for several years," says Dr. Colleen Wilson-Hodge, Fermi GBM principal investigator. The monitor, which was launched in 2008, is designed to observe transient sources and is sensitive to X-rays and gamma rays with energies between 8 keV and 40 MeV. Its operation and the analysis of its data is a collaborative effort between the Max Planck Institute for Extraterrestrial Physics in Germany, and NASA, UAH, and the Universities Space Research Association, whose scientists conduct research in UAH’s Cramer Research Hall. 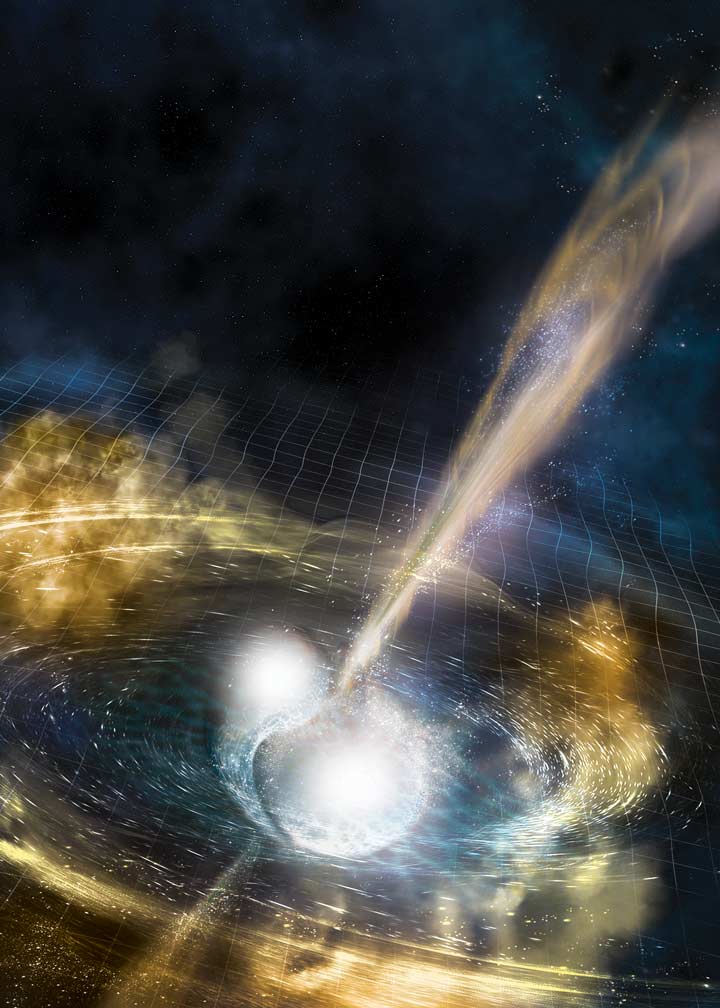 Artist’s illustration of two merging neutron stars.
The narrow beams represent the gamma-ray burst while the rippling spacetime grid indicates the isotropic gravitational waves that characterize the merger. Swirling clouds of material ejected from the merging stars are a possible source of the light that was seen at lower energies.

To help sort through the data that the GBM collects, the team relies on postdoctoral fellow Dr. Péter Veres and Space Science master’s student Ms. Rachel Hamburg. One of their primary responsibilities is to take "burst advocate" shifts for several days each month. "Whenever the GBM detects a GRB, solar flare, or terrestrial gamma-ray flash, the spacecraft sends an alert," explains Hamburg. The burst advocate is then tasked with looking at the data and trying to classify the event. "If it’s an interesting GRB," she says, "we will send a notice to the electromagnetic community so they can point their telescopes to the location and try to get a measurement of how far away it is."

As burst advocates, Dr. Veres and Hamburg were among the first to know that a gravitational wave candidate had been detected by LIGO’s Hanford facility on Aug. 17. "Not everyone was privy to that information, and the results can be time sensitive, so it was all very exciting," says Hamburg. Needless to say, their wait since the start of sensitive LIGO observations in 2015 only added to the exhilaration. "We were preparing for one of these coincident events for a long time," says Dr. Veres. "It is easily the most exciting discovery I have ever been part of."

There was little time for celebration, however, as the team immediately set to work in the wake of the discovery to finalize their contributions to two papers – "An Ordinary Short Gamma-Ray Burst with Extraordinary Implications: Fermi-GBM Detection of GRB 170817A," by A. Goldstein et al., and "Gravitational Waves and Gamma Rays from a Binary Neutron Star Merger: GW170817 and GRB 170817A," by B.P. Abbott et al. – which have since been published in The Astrophysical Journal Letters (doi:10.3847/2041-8213/aa8f41 and doi:10.3847/2041-8213/aa920c, respectively). "Dr. Veres served as the lead on some sections," says Dr. Briggs, "while Ms. Hamburg helped develop some of the software used for the analysis."

It’s still too soon to know whether their involvement will prove a long-term boon to their academic and professional careers, but either way, neither plan to leave the field at such a groundbreaking moment. "This is a very exciting time in gamma-ray astronomy," says Dr. Veres. "I’d like to work for UAH for as long as possible." As for Hamburg, she hopes to "continue chasing GRBs and gravitational waves," as a postdoctoral researcher in multi-messenger astrophysics. "Before coming to UAH, I didn’t know anything about gamma-ray bursts, gravitational waves, or multi-messenger astrophysics," she says. "Now I’m participating in the forefront of observational astronomy."