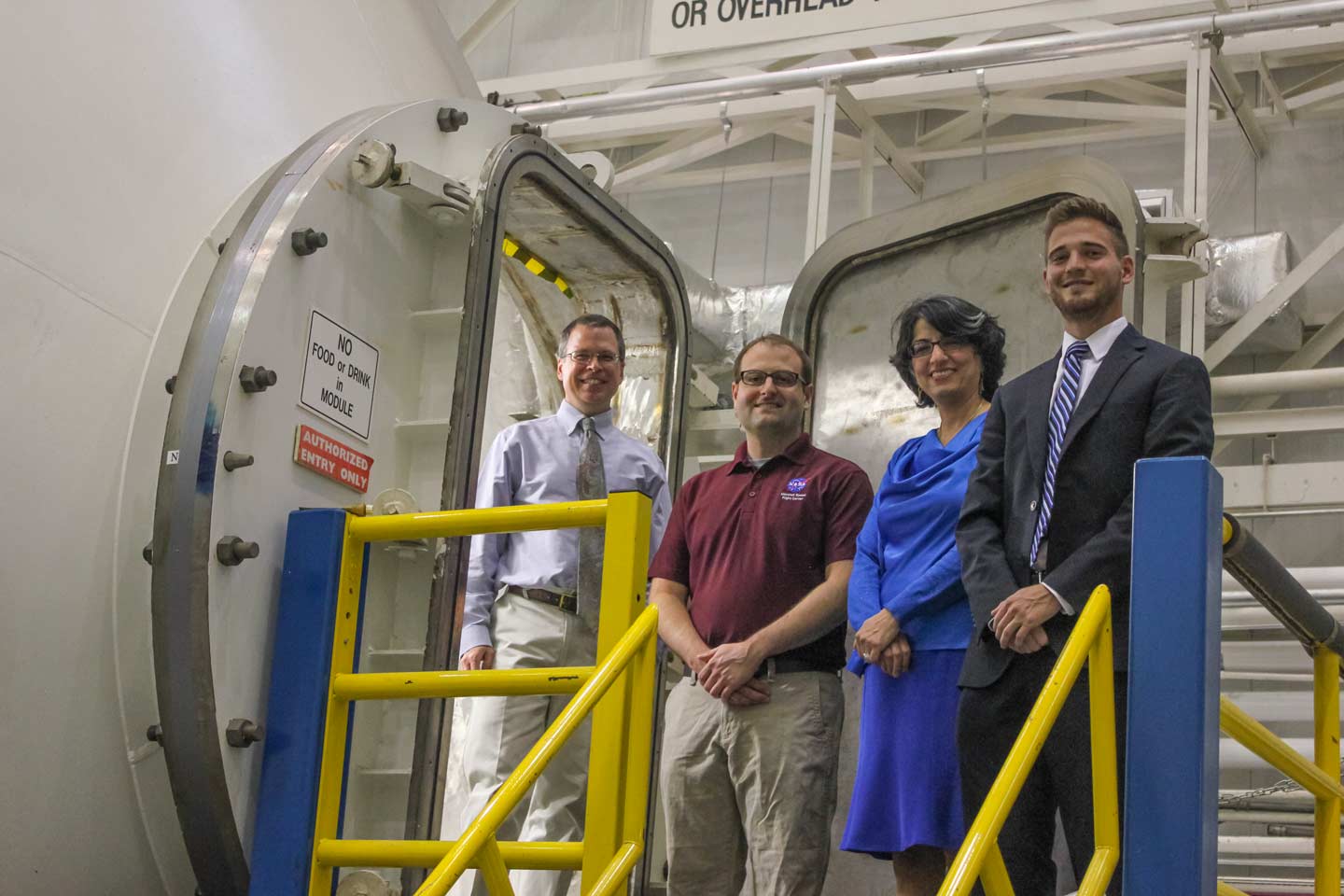 The golden pothos is not a showy plant. It's neither beautiful nor fragrant. Yet this fast-growing vine with its smooth heart-shaped leaves is actually a dark horse when it comes to filtering pollutants out of indoor air. At least that was the theory posited - and now proved - by Matthew Ursprung, a senior mechanical engineering major at The University of Alabama in Huntsville (UAH), in his award-winning research study on the effect of golden pothos on reducing the level of formaldehyde and volatile organic compounds in a ground-based simulated spacecraft cabin.

The impetus for the study came from Dr. Azita Amiri, an assistant professor in UAH's College of Nursing. Along with a handful of nursing students, she had made several previous attempts to determine the effectiveness of using houseplants to remove indoor air pollutants. "In the most recent one, we had put golden pothos in some of the buildings on campus and measured the air quality before and after," she says. "But there were a lot of compounding variables that skewed our results, so we decided we needed to do a new study in a chamber where we could control the environment."

We learned that the process was effective and the results were significant with regard to the amount and rate the chemicals were pulled out of the air.

The chamber she needed already exists; it sits in the Environmental Test Facility at NASA's Marshall Space Flight Center (MSFC). So she reached out to Jay Perry and Matthew Kayatin, environmental control systems researchers at MSFC, to propose a collaboration. "NASA has done a lot of work on phytoremediation - using plants to clean the air, soil, and water," says Dr. Amiri, who had worked with the pair previously as part of the College of Nursing's Space & Life Science Committee (SLSC). "And their willingness to help us in the past brought me back to them for this project."

With the MSFC team onboard, her next task was finding someone to outfit the chamber with a custom lighting and watering system and then run the experiment. Enter Ursprung. "I met with Matthew and he said he could make that happen," she says. "The good thing about engineering students is that you just ask them to do something and they find a way!" For his part, Ursprung says he saw the opportunity as "an exciting project and a good experience," particularly since he hopes to one day work for the space agency. "I thought it would be cool to be out there at MSFC and see how everything works."

He began by focusing on "designing the experiment and determining what would go into the chamber," turning to Perry and Kayatin when he ran into roadblocks. But while the latter were happy to share their experience as long-time life-support-system specialists, they made a point of staying as hands-off as possible throughout the experiment. "We tried to give Matthew some autonomy in leading the experiment because we wanted him to have ownership," says Perry. "So we mainly worked with him on safety compliance and provided the technical support he needed."

Before long, however, the experiment's true heroes - the three golden pothos inside the chamber - proved themselves a challenge to all involved. "None of us are plant experts!" says Kayatin with a laugh. Ursprung was also baffled initially. "There were so many variables working with plants that I hadn't dealt with in the past," he says. "We learned a lot by trial and error." Early on, for example, they recorded a counterintuitively high level of carbon dioxide (CO2) in the chamber. "I spent time looking for a leak to figure out what was producing the CO2 and wondering if we could believe our data," says Kayatin. 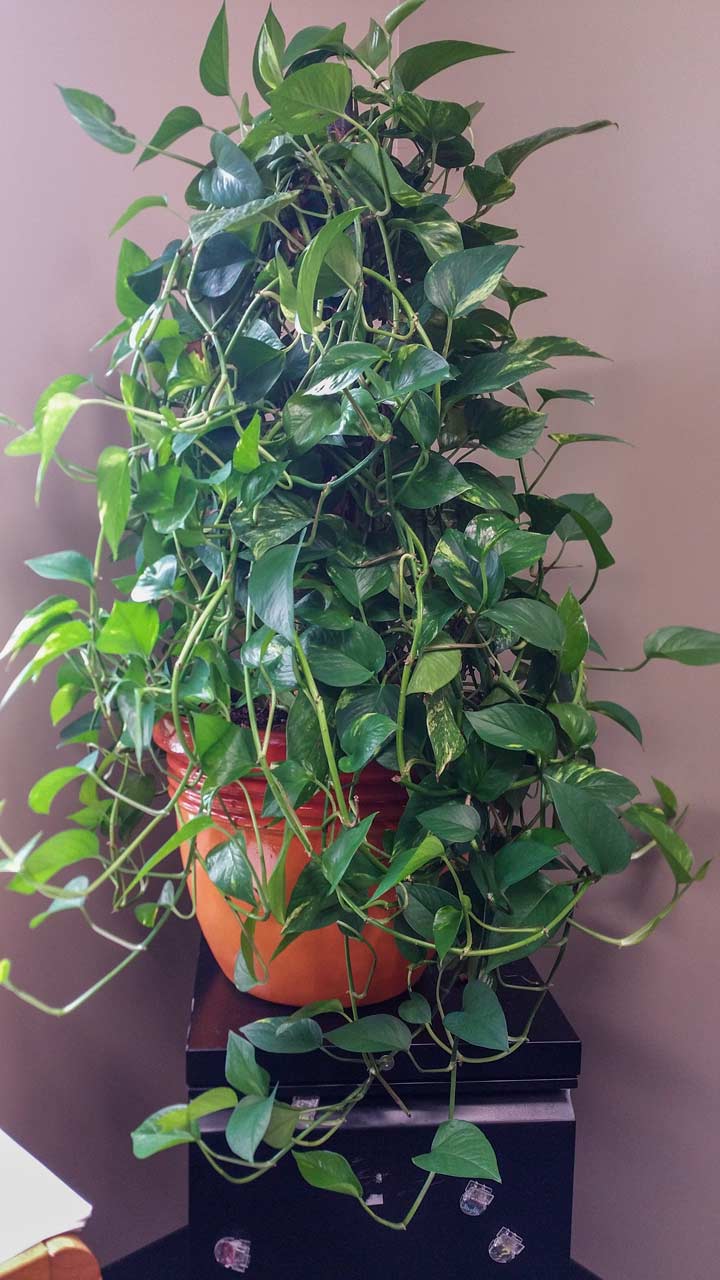 One of the golden pothos used in the experiment to prove the houseplant’s efficacy at removing volatile organic compounds from indoor air.

Eventually they discovered the cause: stress. "I had to go back to what I learned in high school biology and talk to my daughter, who studies horticulture, to figure it out," says Perry, adding that the team also received guidance from a plant physiologist at sister agency Kennedy Space Center. As he explains, plants produce CO2 all the time through respiration; they only produce oxygen when they're illuminated. And when a plant is under stress, whether from being re-potted, moved, or sealed in a chamber, its respiration can increase. "We didn't think about all that, but it made perfect sense," says Perry.

They also realized that their lighting system compounded the increased rate of respiration. "Artificial lighting is not equivalent to natural lighting," says Kayatin. Consequently, the plants weren't producing the same amount of oxygen as they would have if illuminated by the sun. "So we had to pay close attention to how we were lighting the plants." Just as important was how often the plants were being watered. "Plants lose water through their leaves, which increases the humidity, so at one point we accidentally made it rain in the chamber!" laughs Kayatin. The solution? Adding a dehumidifier to the enclosed space.

As with anything plant-related, though, "it was a slow moving process," says Perry. It took several weeks for the team to resolve the lighting and water issues and several more for Ursprung to conduct the actual experiment: injecting a variety of volatile organic compounds into the chamber and then measuring whether or not the plants were successful at reducing the level of toxins. "We started in September of 2015 and ended in January of 2016," he says. "That's how long it took us to get through the stages."

Fortunately, it ended up being worth the wait. "We learned that the process was effective and the results were significant with regard to the amount and rate the chemicals were pulled out of the air," says Ursprung. The findings also validated those of Dr. Amiri's previous studies. "For me, this proves what several other experiments have led to, that it's helpful to have plants to clean the air," she says. "But based on my experience, one plant won't work. So I highly recommend that people have multiple plants indoors."

With the experiment now complete, Ursprung is looking ahead to pursuing his graduate degree in mechanical engineering at the University of California, Los Angeles. Dr. Amiri, meanwhile, is hoping to re-team with both Perry and Kayatin on a future SLSC project. "I have never before enjoyed collaborating as much as I did with this experiment, so I have submitted another proposal in the hopes of getting a grant," she says. And if she does, the NASA researchers say they'd be happy to help out again.

"As a center, we believe it's really important to work with research universities, so that if we notice something that needs attention that's beyond the scope of our project, we can work with academic researchers to look into it," says Perry. "That was the case with this project. It was related to our scope and we knew it wasn't going to take up more than 5 to 10 percent of our time. So when Azita bought the equipment and Matthew designed and ran the experiment, we were able to provide the physical space and the technical support needed."

As for the experiment's golden pothos, they are now perched on Kayatin's living room windowsill enjoying an early retirement - and abundant sunshine - in return for a job well done. "I guess since I spent so much time looking after these plants during our experiments I wanted to keep them for myself," he says. "Maybe when they grow up we can test them again. But if not, I hope they are just happy at home."