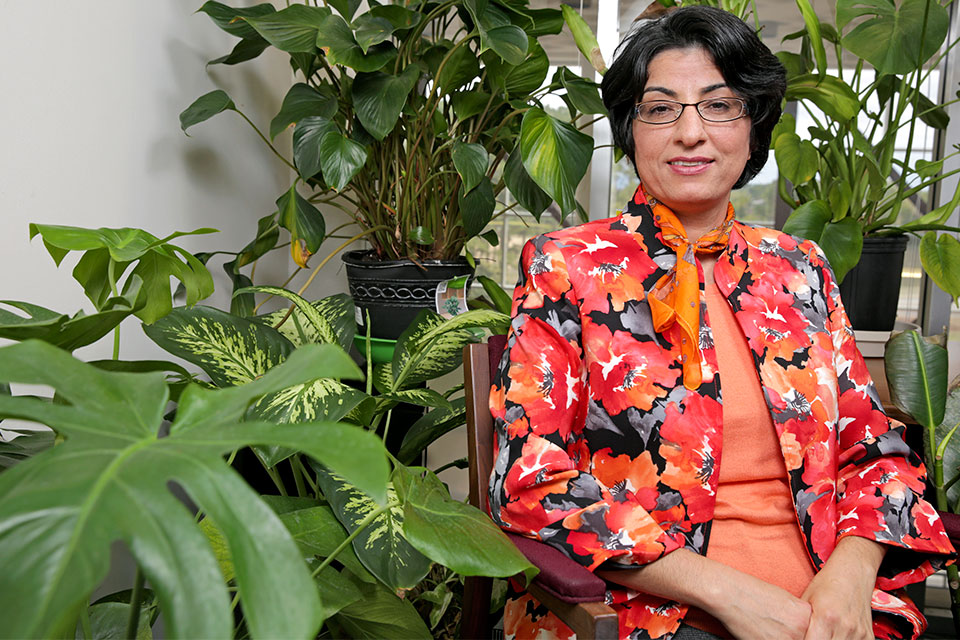 Dr. Azita Amiri recently completed a study of formaldehyde exposure in pregnant women and its relationship to fetal growth.

With the plethora of information available on the Internet these days, it can be difficult to figure out exactly what is and isn't good for pregnant women. But one nursing professor at The University of Alabama in Huntsville (UAH) is determined to get some answers.

"Within the last 50 years, 80,000 chemicals were added to our community and only 13 are regulated, " says Dr. Azita Amiri, whose doctorate is in nursing science. "This means many chemicals have the potential to enter fetuses' bodies, so for my research proposal, I decided to measure formaldehyde exposure in pregnant women."

An organic compound most commonly used in pressed woods and building materials, formaldehyde made headlines in 2008 thanks to the high levels found in FEMA-issued trailers after Hurricane Katrina. And it has remained a public health concern since, given that the chemical is "in almost everything," says Dr. Amiri.

So she and her assistant, UAH nursing student Deena Zahran, set about collecting data from 140 healthy pregnant women from four of the city's OB/GYN clinics. "It was a big project," she says. "I interviewed the women, who agreed to wear a formaldehyde vapor monitor badge for 24 hours. And we collected urine samples to see if and how much formic acid – a metabolite of formaldehyde – was present."

The women also provided information on a range of possible sources of formaldehyde in their residential dwellings, from the type and age of their dwelling to whether or not they used nail polish or smoked.

(The latter led to another interesting discovery, says Dr. Amiri. Although only 15% of the women said they smoked, tests showed that 26% of participants were active smokers and about 50% of them had second- or third-hand exposure to smoke based on the presence of cotinine in their urine.)

Once the vapor monitors and urine samples were gathered, they were analyzed at two off-campus labs and here on campus, with help from Department of Biological Sciences chair Dr. Debra Moriarty and Dr. Gordon MacGregor. The results were then compared to the minimal risk levels outlined by the Agency for Toxic Substances and Disease Registry (ATSDR).

Within the last 50 years, 80,000 chemicals were added to our community and only 13 are regulated.

"The ATSDR's recommendations for formaldehyde exposure are divided into chronic, intermediate, and acute," says Dr. Amiri, explaining that intermediate exposure is defined as exposure between 14 and 364 days and has a cut-off of 0.03 ppm. "I found a mean exposure level of 0.04 ppm, which is higher than any other studies that have been done in a non-pregnant and non-occupational setting in the U.S. or Europe."

In fact, it is four times higher than those other studies, leading Dr. Amiri to embark upon a follow-up. "There is evidence that suggests formaldehyde may increase low birth weight," she says. "So my goal is to repeat my study with animals, exposing them to different concentrations of formaldehyde from their conception through birth."

In the meantime, she hopes to educate the community about the possible risks of exposure. "I'm revising the curriculum of at least one course in the College of Nursing to include reproductive environmental health," she says. "Our nurses can teach pregnant women about the risks of environmental pollutants such as formaldehyde."

Not to mention small, easy changes that can be made to reduce exposure, like lowering the temperature in your house. "When it's warm, you have more outgassing of formaldehyde and other chemicals from furniture and building materials," says Dr. Amiri. "So instead of setting your thermostat to 80 degrees, set it to 69 degrees."

Pregnant women can also avoid substances that contain formaldehyde or produce formaldehyde when mixed with ozone, including nail polish, cleaning products, scented candles, and air fresheners. And they can decrease exposure by adding plants to their home, opening windows, and setting new furniture outside or in their garage to outgas for a couple of weeks.

Ultimately, Dr. Amiri hopes these efforts will lead to what's needed most – regulation of environmental chemicals for pregnant women and children by the federal government. But she knows that won't happen anytime soon. "It's hard to push the government to work faster and do more research," she says.

So this one-time midwife and mother of three will have to settle for making a difference one baby at time. And that's just fine with her. "I want to help pregnant women," she says, "and I love children!"