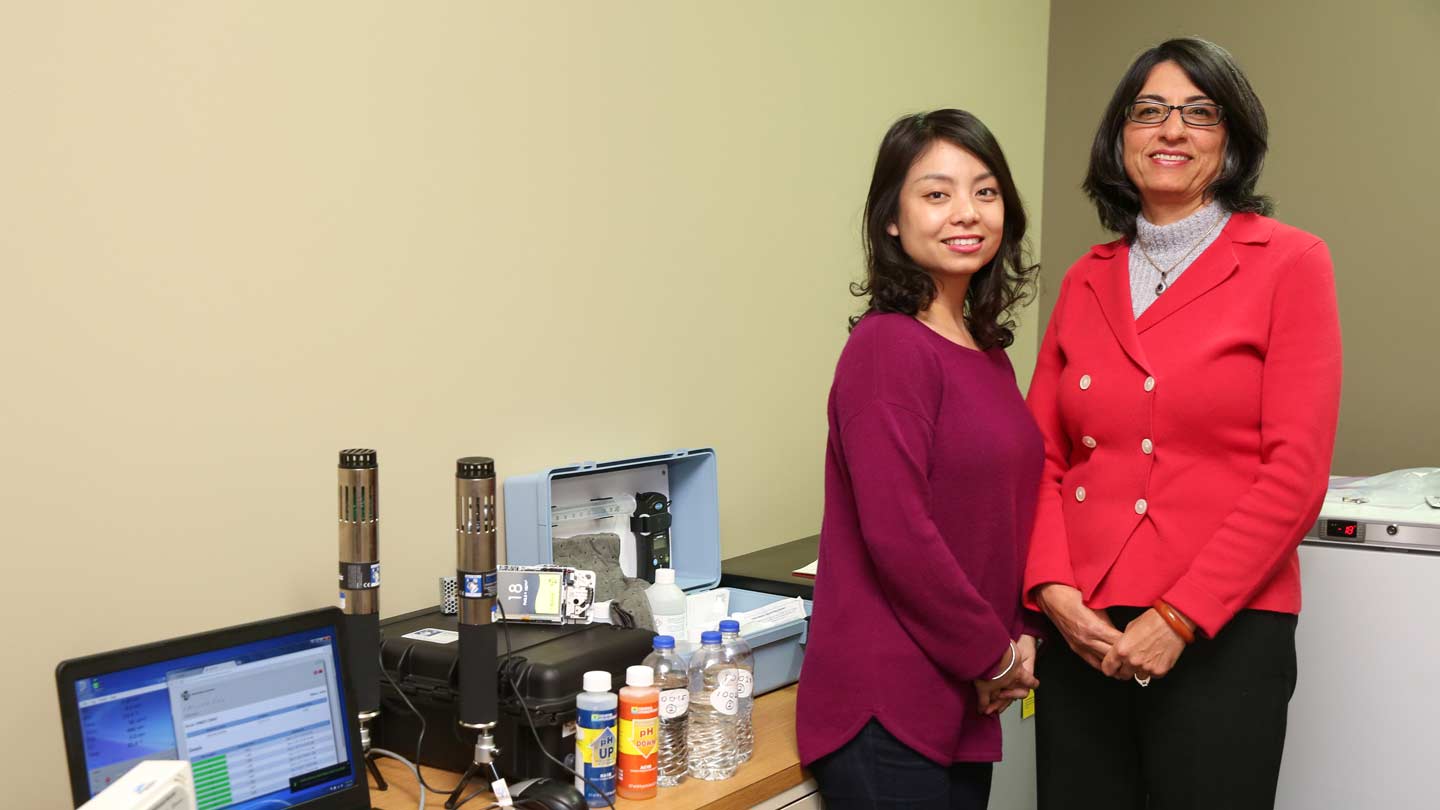 Two UAH professors – Dr. Shuang Zhao and Dr. Azita Amiri – are helping raise awareness about lead poisoning in Uniontown, Ala., where a 4-million-ton pile of coal ash has created concerns about toxic air, soil, and water.

With support from a grant provided by the National Center for Healthy Housing (NCHH), in conjunction with the Robert Wood Johnson Foundation and the Pew Charitable Trusts, Dr. Azita Amiri and Dr. Shuang Zhao are helping raise awareness about lead poisoning among children in Uniontown, Ala., a low-income, predominantly black community located in the state’s Black Belt.

This is not the first collaboration for the two researchers at The University of Alabama in Huntsville (UAH); Dr. Amiri, an assistant professor in the College of Nursing who also serves as chairwoman of the Alabama State Nurses Association’s Environmental Taskforce, and Dr. Zhao, an assistant professor in both the Department of Political Science and the Department of Atmospheric Science, have spent the last two years working together on a variety of environmental research projects.

Uniontown, a city of roughly 2,800 residents located in Perry County, made national news in 2010 when 4 million tons of coal ash were shipped to its Arrowhead Landfill after the rupture of a dike at the Tennessee Valley Authority’s Kingston Fossil Plant. Since that time, says Dr. Amiri, "filthy odors, corrosive dust, and concerns about toxic air, soil, and water have become facts of life" for Uniontown’s citizens.

"A fellow taskforce member had mentioned to me several times that something was going on with coal ash in Uniontown," says Dr. Amiri. "Then I received a call from a citizen saying they needed help and asking me to come visit." She accepted, and extended the invitation to Dr. Zhao, an expert in environmental policy.

"I asked Shuang to accompany me on a field research trip to the region this past April to meet with Uniontown’s community leaders and collect some water samples as a pilot study," says Dr. Amiri, who received a community grant from the Alabama State Nurses Association to fund the study. "We are both focused on environmental issues, and it’s always good to have some cross-college collaboration."

While there, the pair conducted field research and met with leaders and other members of the Uniontown community. They also attempted to gather survey data and disseminate educational materials, only to learn that roughly 30 percent of Perry County’s residents are illiterate. "When we realized they couldn’t read and write, we sat down with them one by one to discuss each question," says Dr. Zhao, describing Uniontown as an "environmental justice community" whose low-income, low-literacy minority citizens are subjected to a disproportionately higher amount of exposure to environmental toxins.

Thanks to the aforementioned NCHH grant, a follow-up visit took place this past November; this time, Dr. Amiri and Dr. Zhao were accompanied by Manoj Paranthaman, a graduate student in the Department of Atmospheric Science. The trio enlisted 90 more participants in the study, collected water samples, conducted dust lead testing using swabs and wipes provided by the Alabama Department of Public Health’s Alabama Childhood Lead Poisoning Prevention Project, and handed out 40 free faucet water filters donated by PUR Company, who will also test the water samples collected for free in a continued show of support for both their research and the community.

In addition, the pair hosted a two-day workshop, during which Dr. Amiri presented the test results from the previous visit, shared videos with parents and children about how to prevent lead poisoning, and enumerated the "10 Policies to Prevent and Respond to Childhood Lead Exposure" outlined in a recent NCHH study. "I asked them to watch for symptoms like loss of appetite, weight loss, sluggishness, fatigue, abdominal pain, and vomiting," she says. "And we encouraged them to wash their hands frequently, to take their shoes off before going indoors, to make sure any lead paint in their home wasn’t cracked and flaking if they live in a old home, to substitute vegetables for junk food, and to have their children younger than one year old taken for a blood test to check for lead – something that Medicaid will cover."

Dr. Zhao, meanwhile, educated the residents about how to communicate with policy makers. "I gave a presentation on how to contact legislators, and I provided the community with a template to help them communicate their concerns with policy makers," she says. "I also helped draft a letter on preventing lead poisoning in children that could be signed by community members and sent to their congresswoman."

Now back at UAH, the pair is seeking additional sources of financial support so that they can return to Uniontown next year. "If we get more funding, we want to do seasonal testing, since a one-time observation – yielding one data point – doesn’t reflect the reality they live in," says Dr. Zhao. "We have to consider other factors that require us to follow up every season or when the weather changes."

In the meantime, both say they are grateful for the support they’ve already received from the NCHH and the opportunity to bring more attention to a serious problem. "We are working diligently in terms of research and outreach in an effort to improve the lives and health of those living in Uniontown," says Dr. Amiri.