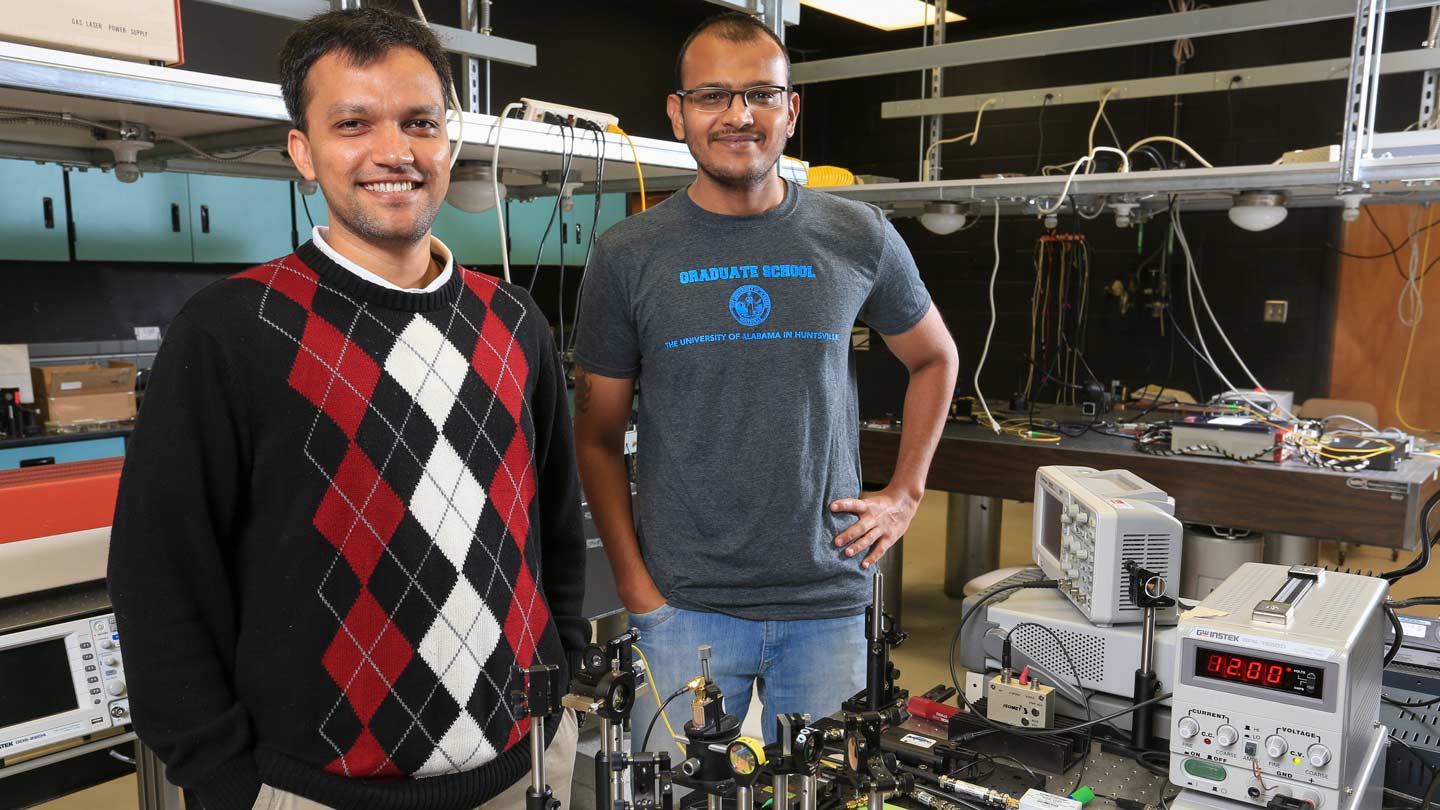 UAH doctoral candidates Hemang Jani and Dipen Barot were selected to attend the prestigious Siegman International School on Lasers. Both are members of the Precision Ultrafast Light Sciences group, which was established by Dr. Lingze Duan in 2007.

Dipen Barot and Hemang Jani, two Ph.D. students in the optical science and engineering program at The University of Alabama in Huntsville (UAH), were selected to attend the prestigious Siegman International School on Lasers in 2016 and 2017, respectively. Only 100 graduate students each year are invited to the weeklong gathering, which brings together experts in the field of lasers and their applications for a series of presentations, workshops, and networking opportunities.

"They are highly motivated students and excel in both the classroom and lab," says Dr. Lingze Duan, an associate professor in the Department of Physics who also serves as the students’ advisor. "They took the lead in putting together their application materials and seeking financial support from the Graduate School, the College of Science, the Department of Physics, and the Optical Society."

Both men hail from India; prior to arriving at UAH, Barot was working an assistant professor at Dharmsinh Desai University in Gujarat, and Jani had just completed his master’s degree in physics at the Maharaja Sayajirao University of Baroda in Vadodara. Both say they were drawn to UAH’s Department of Physics by the prospect of collaborating with professors and students from around the world on cutting-edge research. Dr. Duan’s Precision Ultrafast Light Sciences group, which they subsequently joined as graduate research assistants, more than met their criteria. "As you can tell from the name," says Dr. Duan, "we study precision control and measurement of light as well as optical effects in extremely short time scales."

The program boosted my confidence for pursuing research and provided a lot of opportunities to collaborate.

The 2016 school to which Barot was invited was hosted by the Institute of Photonic Sciences in Barcelona, Spain. "I was lucky enough to be selected to attend and, as an added bonus, was also awarded $1,200, the highest amount available, from the Optical Society to attend the school," he says. The program comprised presentations, discussion sessions, and group activities focused on topics such as ultrafast laser spectroscopy, nonlinear optical materials, laser pulse diagnostics, frequency combs, high-power laser systems, ultrafast X-ray lasers, quantum control, quantum optics, and nanophotonic lasing. While there, Barot presented a poster entitled "Optical Metrology: Imaging and Sensing Based on Femtosecond Optical Frequency Combs" about his research on laser frequency-noise characterization, laser frequency stabilization, and their applications in optical sensing and metrology.

The 2017 program, hosted by Centro de Investigaciones en Optica in Leon, Guanajuato, Mexico, also covered a broad range of topics, from a deep revision on laser pulse compression techniques to the construction of tunable lasers for remote and airborne sensing. Like Barot, Jani presented his own research on the use of ultra-short optical pulses to probe fast electronic dynamics in tiny semiconductor structures in a poster entitled "Ultrafast Nanophotonics: Quantum Dot Thin-Film Sensor Fabrication and Few-Cycle Pump-Probe Spectroscopy." But it was a lecture about on-chip quantum frequency combs from Dr. Roberto Morandotti of Canada’s Institut National de la Recherche Scientifique that really hit home for him. "I was amazed to learn how a Nobel Prize-winning technology is now squeezed down to chip level and used for research in quantum computation," says Jani. "We have this laser in the PULS group at UAH, and it takes up half the room in the lab!"

Just as valuable as the technical sessions, however, were the networking opportunities that took place in the afternoons and evenings, when attendees could partake in cultural and social activities organized by the school. Highlights of the 2016 program included a guided tour of Barcelona, a team boat-building competition, a beach club barbecue, and a visit to Món Sant Benet, a thousand-year-old monastery, while the 2017 program featured an introduction to the pre-Hispanic and colonial heritage of León, a shoe-painting contest, a visit to a local tequila distillery, and a walking tour of Guanajuato accompanied by traditional Spanish music.

"Coming into contact with such excellent people in such an intellectually stimulating atmosphere at an early stage of my research not only aroused curiosity in me, but it also motivated me to pursue my research throughout my professional career by making me understand the importance of optics in our society," says Barot. "Overall, the program boosted my confidence for pursuing research and provided a lot of opportunities to collaborate, and I would strongly encourage young researchers to attend the school."