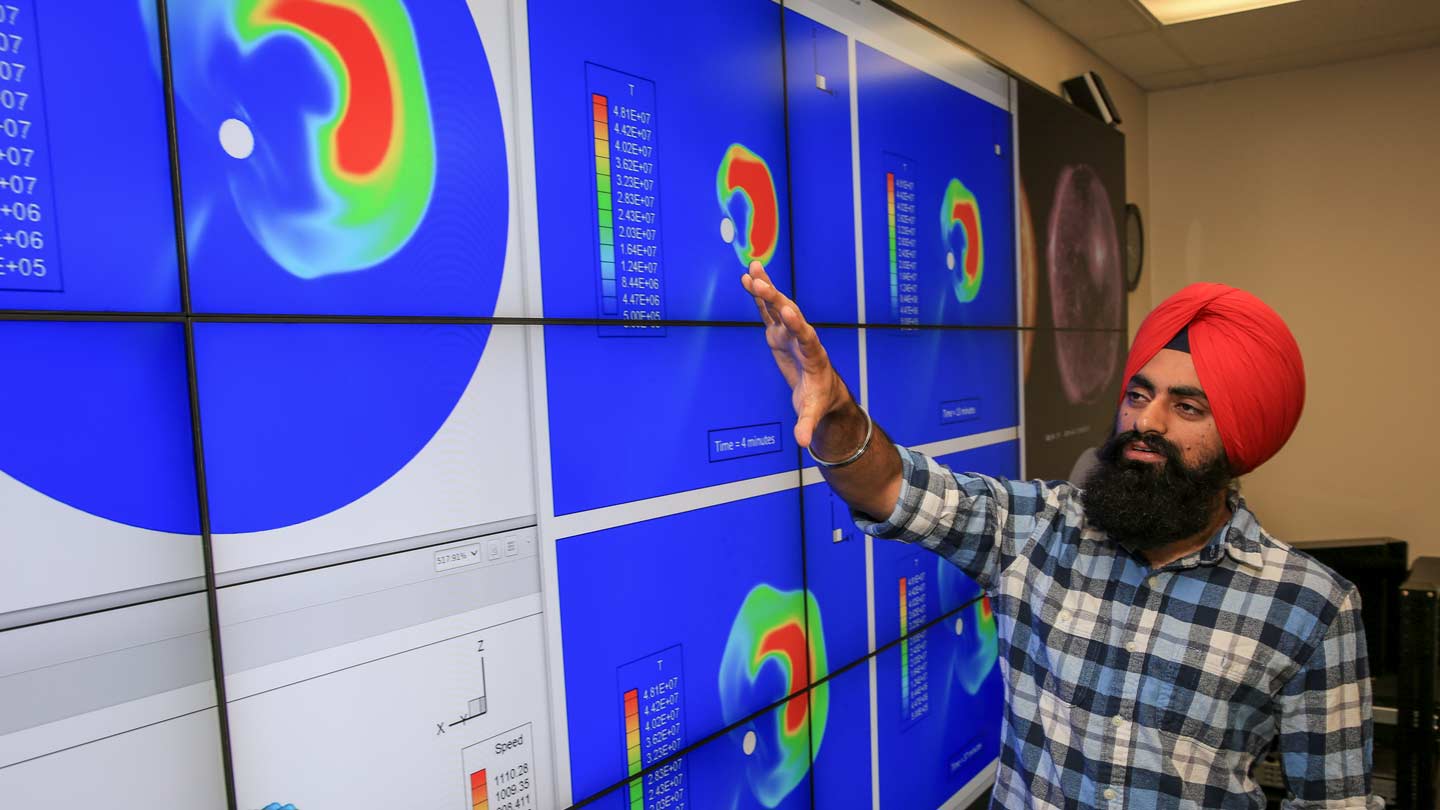 Talwinder Singh, a Ph.D. student in UAH’s Department of Space Science, is the recipient of an NESSF award for the 2018/2019 academic year.

Talwinder Singh, a Ph.D. candidate in the Department of Space Science at The University of Alabama in Huntsville (UAH), has been awarded a NASA Earth and Space Science Fellowship (NESSF) for the 2018/2019 academic year. His proposal, entitled "Modeling Coronal Mass Ejections in the Solar Wind Driven by Photospheric Data," was one of only 12 applications accepted from over 50 submitted in the category of heliophysics research.

Singh earned his master’s degree in engineering physics in India, where he first became interested in the field of space physics, and space weather in particular. "Space weather refers to plasma conditions in interplanetary space, especially in the vicinity of the earth, that are being continuously affected by the sun," he explains. "Extreme space weather can be harmful to satellites, astronauts, airplanes traveling in polar regions, and power grids at higher latitudes, for example."

To learn more about the subject that so captivated him, Singh applied for and held internships at institutes in Spain, India, the United Kingdom, and Hungary before deciding to return for his doctoral degree.

"When it came to choosing a graduate school, UAH was a natural choice for me," Singh says. "The faculty in the Department of Space Science are great, and students have the opportunity to work with scientists from the Center for Space Plasma and Aeronomic Research (CSPAR) as well as NASA’s Marshall Space Flight Center. Plus, the rich history of space exploration in Huntsville was a bonus."

At UAH, Singh works under Dr. Nikolai Pogorelov, an expert in space plasma simulations. His work includes using flux rope coronal mass ejections (CME) models to replicate CME propagation in a data-driven solar wind background. "Simulations using this technique allow us to get closer to reality and will be useful in predicting CME arrival time at earth and its physical conditions when it arrives," Singh explains.

The NESSF award grants Singh $30,000 in funding, and while it can be renewed for a total of three years, he hopes to finish his degree in two. "NASA’s selection of my proposal reaffirms the importance of my work here at UAH," he says, "and will motivate me to further increase my efforts to produce more impactful research."

According to Dr. Gary Zank, department chair and CSPAR director, Singh – like almost all of the department’s students – began to engage in cutting-edge research almost immediately after arriving at UAH. "Talwinder is highly motivated, hardworking, and engaged, and he is one of the Department of Space Science's outstanding students," he says. "The NESSF award is an excellent reflection of his talents and is richly deserved. We're very proud of his accomplishments."