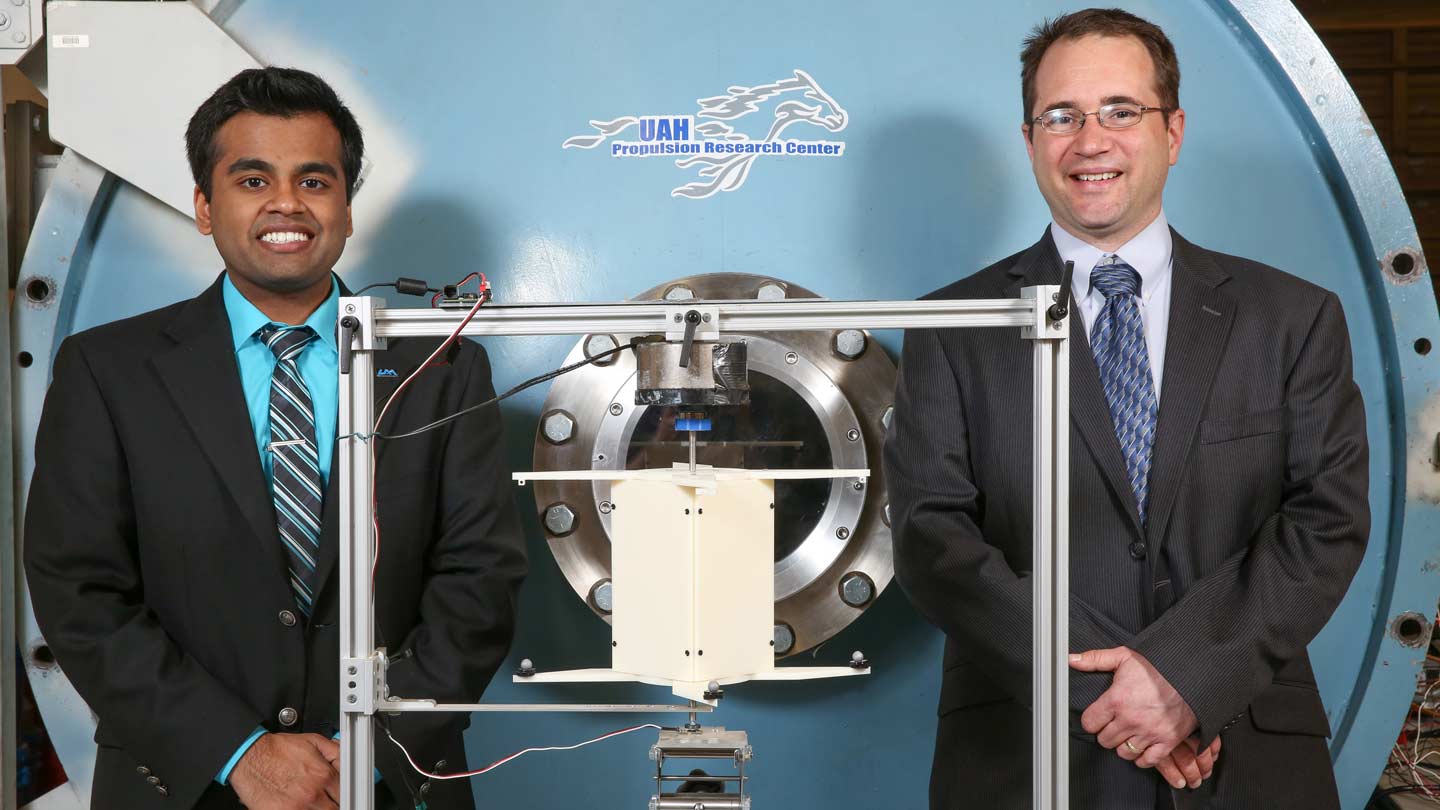 Amit Patel received the award in the master's student division at the 2016 American Institute of Aeronautics and Astronautics (AIAA) Region II Student Conference in Huntsville.

Small propulsion devices about an inch long and less than 0.1 inches in diameter, micro-thrusters are used on a variety of cube satellites, micro satellites and nanosatellites for active orbital maneuvering and for extending mission life by reducing natural drag-induced de-orbiting. The small, electric thrusters have also been studied for use to nudge spent compact satellites into Earth's atmosphere so that they burn up and eliminate potential future space debris.

The burgeoning small satellite field is projected to grow over 75 percent by 2020.

Advised by associate professor of mechanical and aerospace engineering, Dr. Jason Cassibry, Patel performed the award-winning research for his master's thesis in mechanical engineering with support from UAH's Propulsion Research Center. He is continuing the effort at the Propulsion Research Center while he works toward his doctorate in aerospace systems.

"Amit's research contributes significantly to the field of micro-thruster testing - a field that is growing along with the rapid growth of small satellites," says Dr. Cassibry. "When his original advisor took a position at another university in the middle of his research supporting our previous contract, Amit was able to complete the research with significantly reduced guidance. He also single-handedly took over the leadership role necessary to fulfill that part of our research milestones on our contract. He polishes all of his work when giving presentations or writing reports to the level that every figure and table is professional quality on the first draft. This award is well-deserved."

Patel says using the test stand and testing systems he researched could cut the experimentation time of micro-thrusters down to two or three weeks instead of several months, an important advancement in development of the versatile thrusters.

"To meet the complex mission requirements for these satellites, micro-thrusters provide the low-thrust applications for precise orbital control," Patel says,

"I am a rocket guy, used to big rockets and doing large-scale tests, and then they came to me with this proposal to test micro-thrusters and to design a test stand that could do that, and it turned out that it's really interesting work," he says. "The huge growth in small satellites means that the need for accurate and durable test equipment is increasing rapidly."

With the ability to adapt to atmospheric and reduced pressure test conditions, Patel's stand uses an electromagnet to suspend the test platform on a center axis. One or two micro-thrusters are attached, and when fired, they spin the test platform on the levitated axis while supported by the magnetic field.

"The idea behind a magnetic levitation system is to reduce friction, which makes for less analysis and quicker application of the research," says Patel.

"In order to meet the demands of the industry, you need to have these qualities," he says.

The test stand's design allows 3-D printing of many parts - most importantly, the test platform. New test platforms can be printed overnight, providing rapid adaptability to a variety of applications.

"That adds value to it, for sure," Patel says. "If we can reduce the manufacturing time and make the test stand adaptable when a company comes in and says they want to do a test right now, then we can always be ready to fill the need for rapid testing."

Part of the testing involves discovering the mass moment of inertia in order to determine the amount of torque the micro-thruster must produce for the desired acceleration. These tests were conducted in UAH's Autonomous Tracking and Optical Measurement (ATOM) lab in order to compress test times.

"We performed tests in the ATOM Lab using the Vicon motion tracking system to find the mass moment of inertia with experimental data, instead of using traditional equations to figure it out because it was much quicker this way," Patel says.

As a benefit of his award, Patel has been invited to present his research at the AIAA Sci-Tech Conference in Grapevine, Texas, in January. His abstract has also been accepted for presentation at the 2016 AIAA Propulsion and Energy Conference in Salt Lake City, Utah, in July.

"There will be a lot of demand for this kind of testing capability as the field grows," Patel says. "We need to do extensive testing of these thrusters on the ground before it can be approved for use in space."