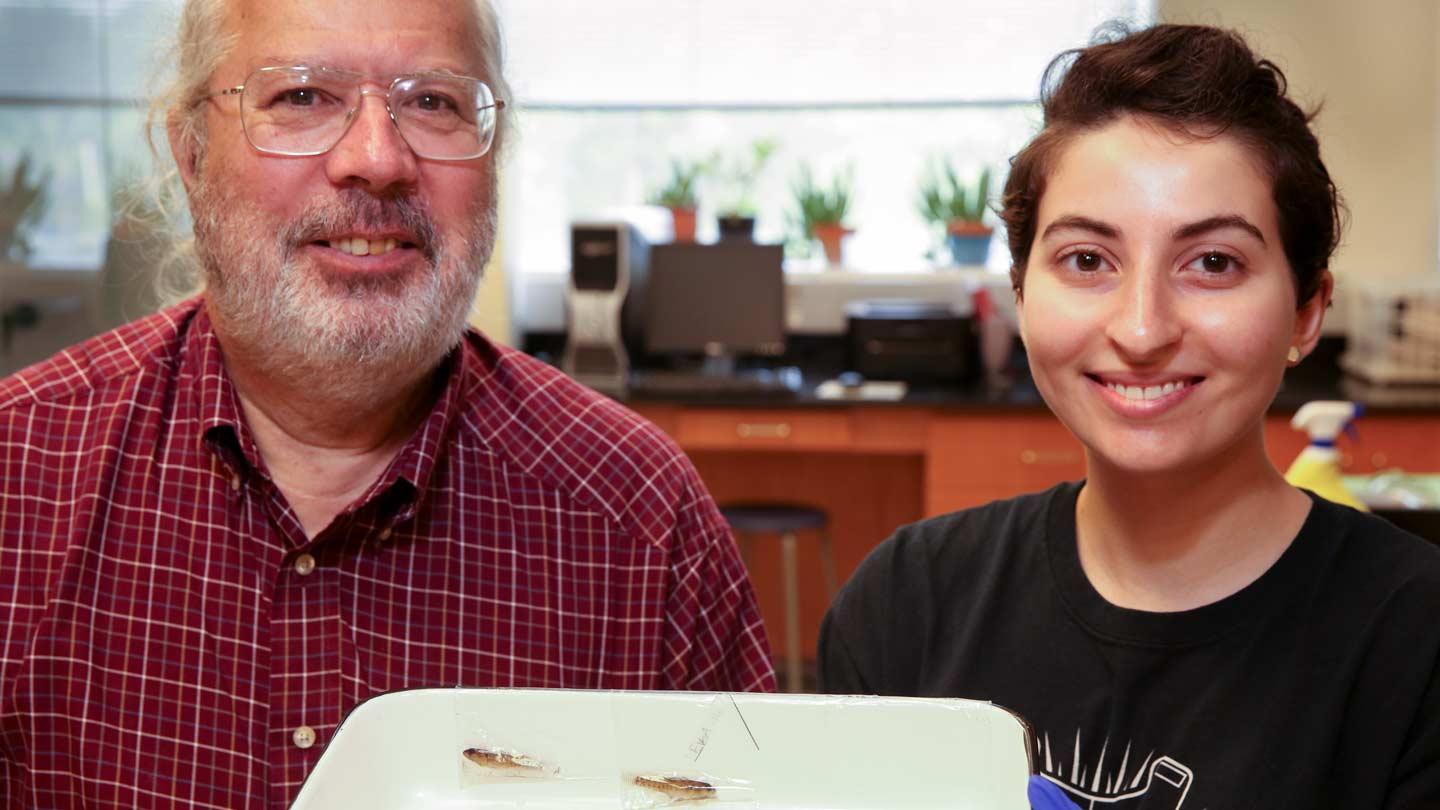 Dr. Bruce Stallsmith, an associate professor of biology, and Zeina Sleiman, a junior biology major, partnered on a research project about the reproductive biology of the darter fish Etheostoma kennicotti in response to gill parasite infections. This summer, Sleiman will participate in the Biotrain internship program at the HudsonAlpha Institute for Biotechnology.

Zeina Sleiman couldn’t have predicted she’d end up waist-deep in the icy waters of Estill Fork when she took a job in the chemistry stockroom at The University of Alabama in Huntsville (UAH) as a freshman. But that’s exactly where the junior biology major found herself last spring, collecting fish specimens from Jackson County’s Flint Rock river system as part of her research on the reproductive biology of the stripetail darter in response to gill parasite infections. "The field collections were so fun," she says. "We would all meet up and take a two-hour drive into the country with no cell signal." After that, the students would don high, waterproof boots and wade out into the swift-moving water. "Two would hold a big net, while others would kick and dislodge rocks to agitate the fish and get them into the net," says Sleiman. "We would identify the ones we wanted to keep and collect them in a bucket."

Sleiman initially sought out hands-on research opportunities after her mentor, UAH alumnus Thomas Reyes, encouraged her to do so. "I had wanted to go into medicine, but it just hit me that I didn’t want to go to medical school," she says. "I could go to graduate school and do research!" Despite having no previous experience, Dr. Bruce Stallsmith welcomed her to his lab, which focuses on aquatic ecology research. "I started volunteering with him about a year ago, and then I was in his RCEU program," says Sleiman, referring to UAH’s Research or Creative Experience for Undergraduates (RCEU) program. By the end of the summer, however, she was hooked, so Dr. Stallsmith tasked her with researching the Etheostoma kennicotti, a poorly studied species of fish found in streams in Tennessee, Ohio, Kentucky, Illinois, Alabama, Georgia, and Mississippi, and characterized by a black bands, or stripes, on its fins.

The opportunities for students at UAH are always expanding, so there’s no excuse not to seek them out.

"The purpose of this study was to determine whether or not parasitic infection would result in fecundity compensation within the species," says Sleiman, who was paired with fellow UAH undergraduate Corinne Peacher. Triggered in response to parasitic activity, fecundity compensation is a nonimmunological defense mechanism results in smaller, but more numerous eggs – a process considered to be less work for the body than mounting an immune response. "There has not been any extensive research done on this particular species," says Sleiman. "So first we had to calculate their gonadosomatic index by extracting their gonads, weighing them, and then dividing that weight by their body weight. That’s how we learned that their peak reproduction period is from March through May."

The next step was to determine the percentage of infection during this time period. "We extracted the gills, and then we extracted the parasites using needles to count them," she says. "We found that the males had a larger amount of parasites, but that the females were more likely to be infected." They also discovered that parasitic load appeared to have the same reproductive period as the darters, with the highest percentage occurring in March and decreasing into May. "This can be explained by the combined variables of optimal water temperature and host reproductive conditions, enabling the infection to peak and then slowly decrease as water temperatures increase," she says. And while she adds that further research is needed, such a close association between reproductive timing suggests there is a correlation. "It can be concluded that the parasites have matched their reproductive patterns to their host to enhance higher success in parasitic infection due to the energy costs of reproduction within the host."

With encouragement from Dr. Stallsmith, Sleiman and Peacher wrote up the results from the study last fall and headed up to the Southeastern Fishes Council Annual Meeting in Chattanooga to present them. "Writing for research is completely different from English or high school writing," she says. "We pulled multiple all-nighters working on the paper and the poster!" The effort was more than worth it, though, when their paper was published in the spring 2018 issue of "Perpetua: The UAH Journal of Undergraduate Research," and their poster took third place in the undergraduate science category at the 2018 Research Horizons Day. And it’s even more impressive when you consider that Sleiman was doing all of this work on a volunteer basis; a few months previous, she’d signed on to help Dr. Joseph Ng with his research into the molecular mechanism and action of specific hyperthermophilic proteins. "It was pretty much my child at the time, so I wanted to see the conclusion," she says of the darter project. 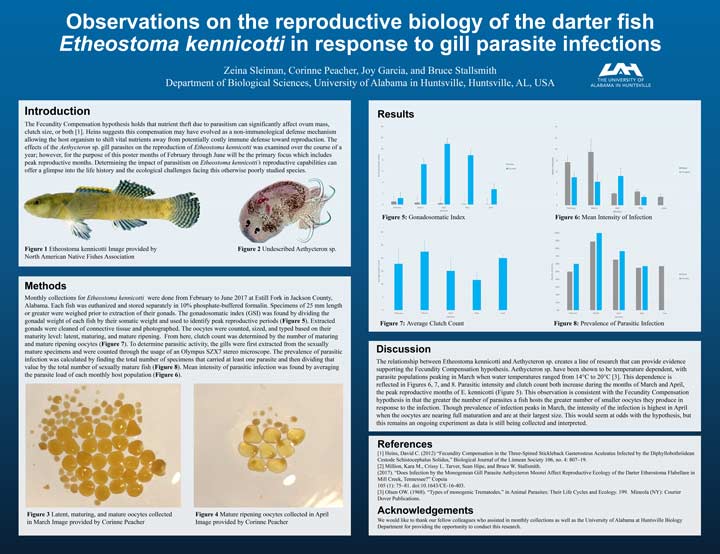 Not surprisingly given her love of research, this summer looks to be just as busy for Sleiman. Along with fellow UAH students Brianna Graham, Katelyn Miller, and Alexander Moss, she was selected for HudsonAlpha's prestigious Biotrain internship program. Hosted by the HudsonAlpha Institute for Biotechnology, the nine-week program offers students the opportunity to connect classwork with real-world job experience and gain skills and knowledge that will prepare them for careers in biotechnology and related fields. "I’ll be a chemistry intern with Serina Therapeutics, which does drug discovery," says Sleiman, referring to one of the for-profit companies located on HudsonAlpha’s campus. As part of her job, she will learn about not only simple polymer chemistry properties in relation to synthesis, conjugation, and performance, but also the analytical methods and tools necessary to characterize these compounds. "I want to work industry, so working in a biotechnology company is exactly what I need for the summer," she says.

Despite her accomplishments, however, Sleiman is quick to credit others with helping her get to where she is, whether its her mentor Reyes, who originally encouraged her to pursue research; Dr. Stallsmith, who gave an inexperienced freshman the chance to do so; or David Cook, UAH’s student research coordinator and the founder and organizer of Research Horizons Day. "You should be doing well in your classes, but you learn critical thinking and problem-solving skills through research," she says. "And the opportunities for students at UAH are always expanding, so there’s no excuse not to seek them out." Even, she adds, if that means fording fast-flowing waterways in the middle of winter.