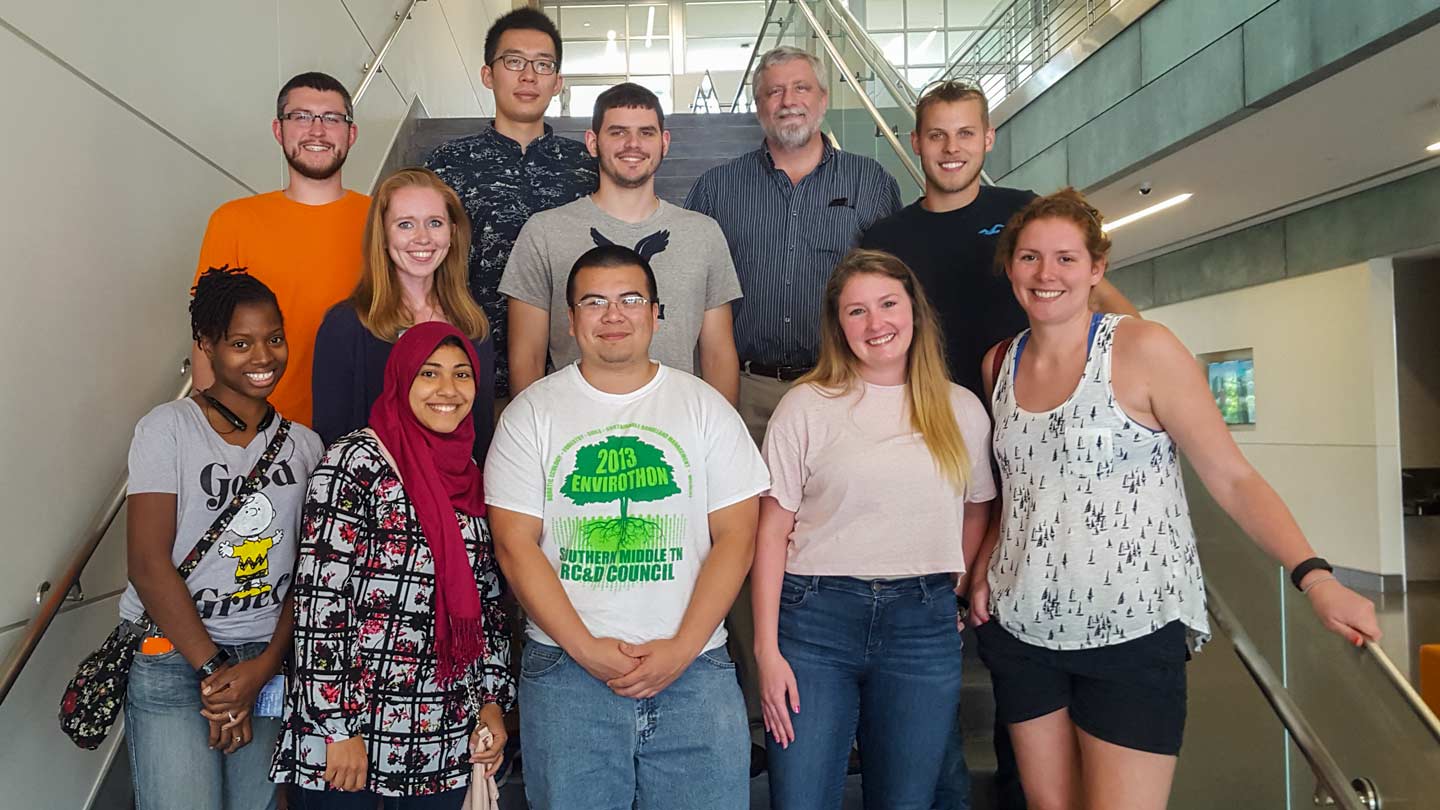 If one day in the not-so-distant future you find yourself driving a car that was 3-D printed, you may have Thomas Reyes to thank. The University of Alabama in Huntsville (UAH) junior chemistry major spent the summer conducting research on increasing interfacial adhesion in the fused deposition modeling of polymers – specifically the kind used in 3-D printed cars like the Oak Ridge National Laboratory’s Shelby Cobra.

"Polymers are much cheaper than the materials currently used to make cars, and they are much lighter, which makes 3-D printed cars more gas efficient,” says Reyes, a Huntsville native. "But their structural integrity isn’t very good, so they wouldn’t survive a collision. Our goal was to make them stronger by increasing the adhesion between interfacial layers so that they can be used on the road.”

Reyes work was done as part of a Research Experiences for Undergraduates (REU) program he participated in at the University of Tennessee at Knoxville (UTK) this past summer. "I had applied to and was accepted by several other colleges’ REU programs, but I chose UTK because I wanted to work with Dr. Dadmun,” he says, referring to UTK chemistry professor and Oak Ridge National Laboratory faculty member Dr. Mark Dadmun. "He works on the physical chemistry of polymers, which I am interested in.”

The 10-week program culminated in a poster session, with Reyes presenting the one he co-authored – "Increasing Interfacial Adhesion in Fused Deposition Modeling of Polymers” – to his fellow REU participants. "I talked for two hours!” he says. Now he’s planning to do the same at the 43rd Annual Meeting of the National Organization for the Professional Advancement of Black Chemists and Chemical Engineers in Raleigh, N.C., this November. 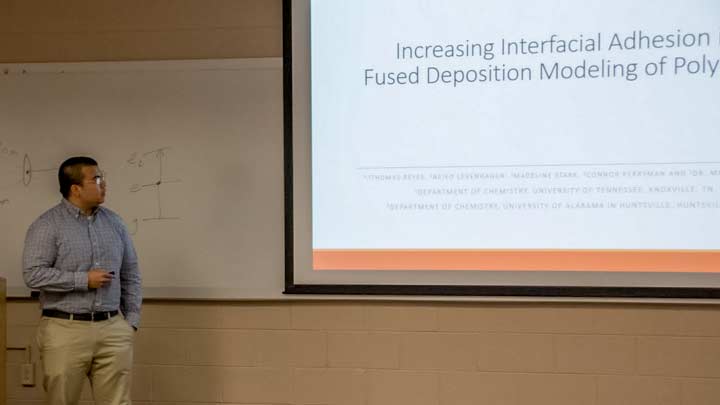 Toward the end of his REU experience at UTK, Reyes presented his research on interfacial adhesion in the fused deposition modeling of polymers.

But as impressive as all this is, it’s far from the first time Reyes has conducted high-level research in the chemistry lab. After being accepted to UAH, he spent his first semester researching the thermal conductivity of carbon nanotube polymers as part of the Alabama Louis Stokes Alliance for Minority Participation (ALSAMP) program. "I got paired with Dr. Enrique Jackson at Marshall Space Flight Center, so I worked with him there and was supervised in the lab on campus by Dr. Emanuel Waddell,” says Reyes, who is an ALSAMP scholarship recipient. "I stayed with that project through the rest of my freshman year like an REU, and then presented my work at two ALSAMP conferences.”

The following year, Dr. Carmen Scholz invited Reyes to join her in her lab, which focuses in part on innovative ways to convert glycerol, a waste product in the biodiesel industry, into a value-added product. "I worked on the conversion of glycerol to butanol using anaerobic bacteria,” he says, adding that he will continue to work in her lab through this year. "The plan is to make a reactor that will house the bacteria so glycerol will go in one end and butanol will come out the other end.” That butanol, he explains, can then be used as a potential fuel additive – one that has many advantages over the more-hydrophilic ethanol additive currently used.

After that, Reyes will have one more summer to dedicate to an REU program before heading into his senior year. "I wouldn’t mind going back to UTK, but it’s recommended not to go to the same place so you can try other things,” he says. "The goal is to help me find out what I’m interested in studying at graduate school.” Currently he’s considering Ph.D. programs in polymer, analytical, or physical chemistry. "At least I’ve narrowed it down to three already!” he laughs.

Whatever he ends up choosing, his ultimate destination is a career in industry. "As part of this past summer’s REU, we got to see what researchers do in a national lab and in a commercial one,” he says. "The commercial one really interested me.” Of course, that’s still a long way off. Though by then, who knows? Reyes may be driving his very own 3-D printed car to work.