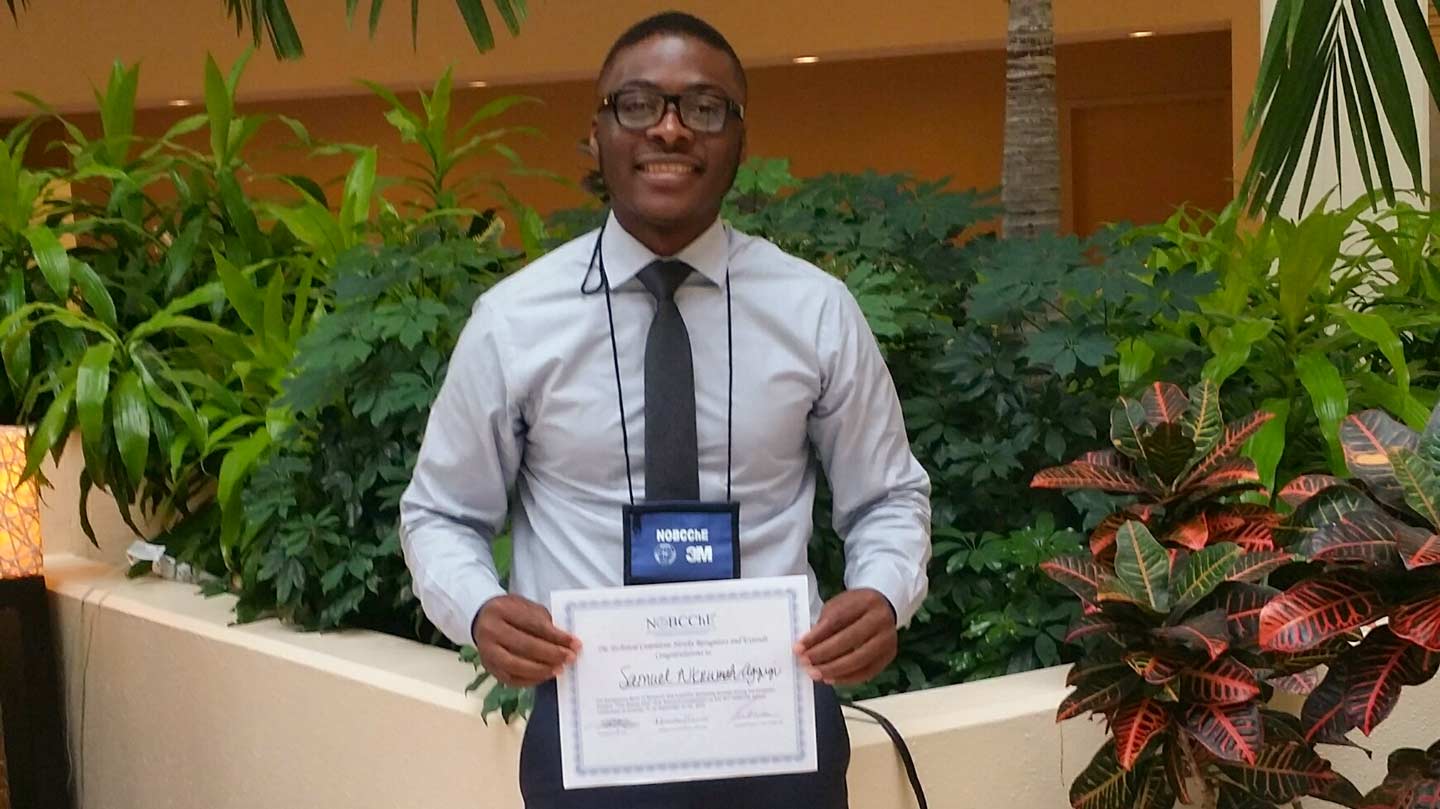 Samuel Nkrumah-Agyeefi won first place at the NOBCChE 2-Minute Drill Research Pitch with his presentation on the novel functionalization of MCL-polyhydroxyalkanoates via “click chemistry.”

Samuel Nkrumah-Agyeefi set out for the 42nd Annual Meeting of the National Organization for the Professional Advancement of Black Chemists and Chemical Engineers (NOBCChE) intending to keep a low profile. It was his first major conference since becoming a Ph.D. candidate in the biotechnology program at The University of Alabama in Huntsville (UAH), and he didn't want anything to distract him from his poster presentation. So no one was more surprised than him when he walked away with a first-place win at the NOBCChE 2-Minute Drill Research Pitch sponsored by Corning Inc. and GlaxoSmithKline.

"I had decided to go watch the competition, when the moderator asked me if I wanted to sign up," says Nkrumah-Agyeefi. "I didn't have anything prepared but I figured I could talk about what I always do in the lab for two minutes!" He ended up summarizing his research on the novel functionalization of MCL-polyhydroxyalkanoates via "click chemistry," the topic of his poster presentation. "Initially I was a little nervous, but when I got up there, I felt very comfortable because I was talking about my research," he says. "I got into my zone!"

At no point, however, did Nkrumah-Agyeefi think he would win. It was only when the scores were tallied and his name was announced by the judging panel that he realized he'd been awarded first prize. "We are extremely proud of Samuel," says Dr. Roderquita K. Moore, chair of NOBCChE's Technical Programming Committee, of his success at the event. "We hope this accomplishment will catapult him into doing more in the STEM arena."

I didn’t have anything prepared but I figured I could talk about what I always do in the lab for two minutes!

Such an outcome seems highly likely. After all, Nkrumah-Agyeefi has spent much of his life working toward a career in the sciences. "Growing up in Ghana, I had a passion for biology and chemistry," he says. His parents - an accountant and a high school headmistress - were also supportive. "They've known I've always loved science, so they really pushed me toward that," he says. "I'm eternally grateful to them."

After graduating from Adisadel College, a boarding school in Cape Coast, Nkrumah-Agyeefi decided to pursue his undergraduate education in the U.S. "I felt that being trained in the U.S. would help me with what I want to do in the future, which is to work here in the biotechnology industry," he says. So with guidance from his older brother, he enrolled in Drake University in Des Moines, IA, where he earned a bachelor of arts in biochemistry with a focus in cell and molecular biology in 2010.

That was then followed by a short stretch back home in Ghana - all of the country's college graduates are required to fulfill one year of national service - before Nkrumah-Agyeefi returned to the U.S. to begin his graduate academic career. "I chose UAH because of its biotechnology program," he says. "I wanted something that integrated biology and chemistry, and I figured this program would best fit my interests." And so far, he adds, it more than has.

For the last three years, he has been working closely alongside his advisor, Dr. Carmen Scholz, to develop platforms of bacterial polyesters for biomedical applications. "The biodegradability and biocompatibility of the biopolymers makes them suitable for making coatings for medical devices so that they won't elicit any adverse reactions when they're put in the human body," he says. "Chemical modification of these biopolymers expands their scope of applicability. Therefore understanding the chemistry by which such modification can be carried out is necessary for tailoring the properties of these biopolymers to specific functions" 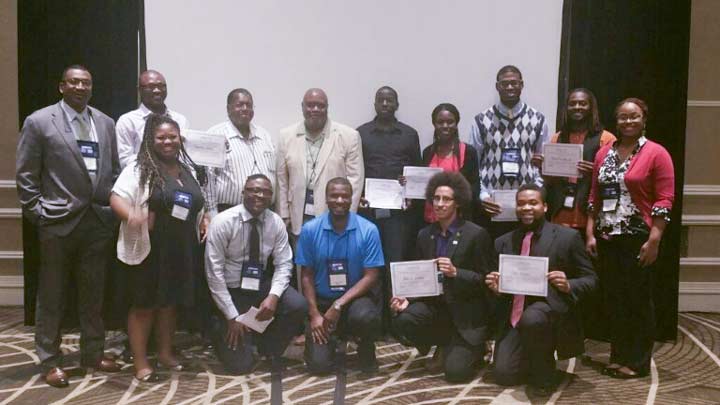 Nkrumah-Agyeefi poses with his fellow participants and judges at the 2-Minute Drill Research Pitch.

It's exactly the kind of hands-on experience that Nkrumah-Agyeefi was hoping to get when he decided to come to the U.S. - and one that has been enriched by the mentoring he's received from his professors. Indeed, it was Dr. Scholz, along with fellow chemistry professor Dr. Emanuel Waddell, who not only suggested he attend but who also made it possible for him to do so. "Dr. Waddell introduced me to NOBCChE and encouraged me to go, and Dr. Scholz provided funding for my travel and meals," he says, adding that he also received a grant from NOBCChE to cover lodging and registration. "I'm grateful to them for the opportunity and for supporting me."

And he wasn't the only one. Geordan Burks, a fellow student in the Biotechnology Program, also credits Dr. Waddell and UAH alumni Kenya Wallace for encouraging her to attend the conference and present her research on the characterization of the protein PTRHD1. "It was an amazing networking opportunity and a chance to interact with peers from all over the U.S. who could offer unique ideas and insight I have never considered before," she says.

Of course, now that Nkrumah-Agyeefi is back, he's already looking forward to NOBCChE's 2016 conference. "Because this was my first time attending, I thought, I'll just do the poster," he says. But given that he has already successfully presented his research - and won a prize for doing so - he's got his sights set a little higher. "Hopefully next year," he says, "I'll do the oral presentation."