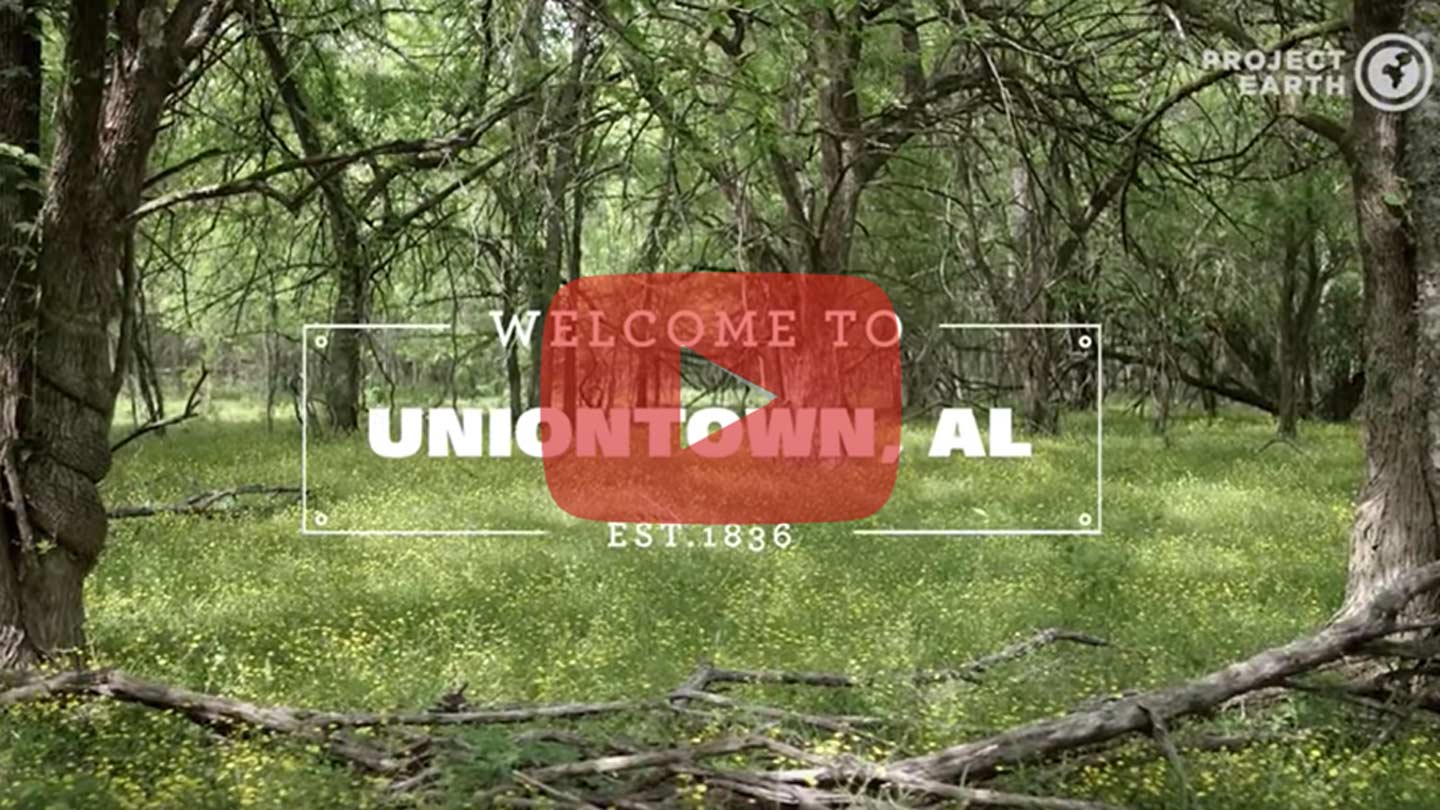 Dr. Azita Amiri, an assistant professor in UAH’s College of Nursing, and Dr. Shuang Zhao, an assistant professor in both the Department of Political Science and the Department of Atmospheric Science, have been working to bring attention to the plight of residents in Uniontown, Ala., an environmental justice community located in the state’s Black Belt. This 10-minute documentary is just one initiative they have collaborated on over the past three years to advocate on behalf of the community’s residents.

Uniontown, Ala., a low-income, predominantly black community located in the state’s Black Belt, made the national news back in 2010, when 4 million tons of coal ash were shipped to its Arrowhead Landfill in the wake of a dike rupture at the Tennessee Valley Authority’s Kingston Fossil Plant. But it wasn’t until after the cameras stopped rolling that the reality of just what all that coal ash would mean for the surrounding air, soil, and water began to sink in among those who call Uniontown home.

As telltale signs of contamination began to pile up, word made its way to Dr. Azita Amiri, an assistant professor in the College of Nursing at The University of Alabama in Huntsville (UAH) who serves as the chairwoman of the Alabama State Nurses Association’s Environmental Taskforce. "I received a call from a Uniontown citizen saying they needed help and asking me to come visit," says Dr. Amiri. She accepted, and extended the invitation to Dr. Shuang Zhao, an assistant professor in both the Department of Political Science and the Department of Atmospheric Science. "Shuang accompanied me on a field research trip to meet with Uniontown’s community leaders and collect some water samples as part of a pilot study funded by a community grant from the Alabama State Nurses Association."

It was while there that the pair discovered the community was facing more than just a coal-ash problem. "Uniontown has had a failed sewer system and an ineffective waste treatment spray field for many years – not to mention, a cheese plant responsible for adding rotten whey to the environment," says Dr. Amiri. "There’s also only one physician practicing in town, there’s no nurse, and the nearest hospital is 30 miles away in Selma." As for the residents, the majority are unemployed and live below the poverty line, while the county at large struggles with a 27 percent illiteracy rate. "We soon realized that Uniontown had the potential to be an environmental justice community," she says, "a place where residents face a higher risk of being exposed to environmental hazards due to their race, ethnicity, and socioeconomic status." 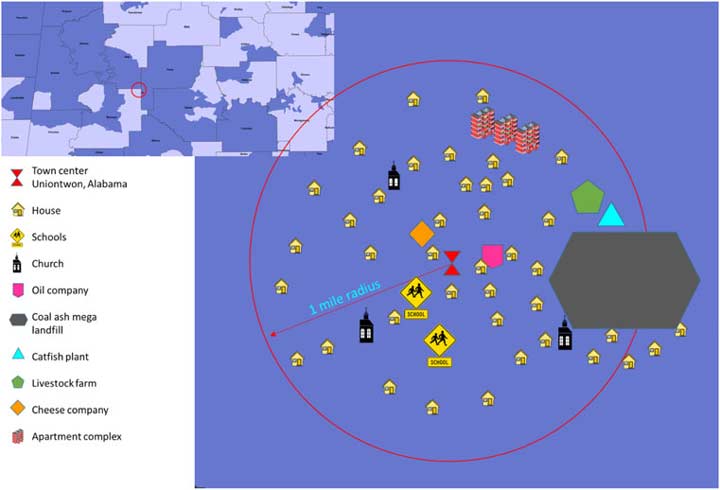 Within a mile radius from the center of Uniontown are multiple polluters, such as a cheese plant, farms with livestock and catfish, and a coal-ash landfill, in addition to residences, schools, and churches.

This hypothesis – and the realization that much more would have to be done if the residents of Uniontown were to get the help needed – galvanized the researchers. Armed with the results of the pilot program, they returned to Uniontown six months later with Manoj Paranthaman, a graduate student in the Department of Atmospheric Science, for a follow-up project funded by the National Center for Healthy Housing in conjunction with the Robert Wood Johnson Foundation and the Pew Charitable Trusts. First, they collected drinking water samples, both well and city, from 59 of the study’s participants. Then they had residents complete demographic- and health‐related questions using a standard health survey tool of the World Health Organization.

"In addition, we conducted dust-lead testing using swabs and wipes provided by the Alabama Department of Public Health’s Alabama Childhood Lead Poisoning Prevention Project, and we handed out free faucet water filters donated by PUR Company," says Dr. Amiri. "And we hosted a workshop during which we asked the residents to keep watch for common lead-poisoning symptoms, like loss of appetite, weight loss, sluggishness, fatigue, abdominal pain, and vomiting, and to take precautionary measures, like frequent hand washing and taking their shoes off indoors, to help prevent the spread of contaminants."

Once back at UAH, she and Dr. Zhao set to work analyzing the data they had collected. First, they shipped the water samples to TestAmerica Laboratories Inc. outside of Atlanta, Ga., where they were tested using U.S. Environmental Protection Agency (EPA) method 200.8, the standard and reliable method used by laboratories to measure heavy metals in the water. "We found lead levels higher than the health limit at 10.4 percent and traces of arsenic at 8.6 percent in the drinking water samples," says Dr. Amiri. "We also found high levels of sodium, calcium, and potassium in some samples, although none of these metals are currently regulated in drinking water as there is not enough evidence regarding their health effects."

Next, they used the EPA’s environmental justice (EJ) mapping and screening tool, EJSCREEN, to determine how Uniontown’s environmental and demographic information ranked in comparison to the rest of the state, the relevant EPA region, and nation. "For simplicity’s sake, we used the Pennsylvania Department of Environmental Protection’s definition for EJ communities regarding demographic distribution," says Dr. Amiri, explaining that some states provide different definitions for EJ communities and others – like Alabama – do not provide any at all. "This definition identifies EJ areas as ones with a poverty rate of 20 percent or more or a non‐white population of 30 percent or more, which Uniontown far exceeds with a poverty rate of 57 percent and a non-white population of 91 percent." For the EJSCREEN, the researchers also used lead paint, proximity to waste and hazardous chemical facilities, and waste-water discharge as important environmental indicators for Uniontown.

Not surprisingly, given their own observations and the high lead and arsenic content in the water samples, the EJSCREEN results confirmed their theory: not only is Uniontown an EJ community, but it’s in dire need of help. "According to EJSCREEN’s calculation, Uniontown’s demographic index is in the 80th to 90th percentile, and its income measurement in particular is in the 90 to 95th percentiles as compared to the average of the whole U.S.," says Dr. Amiri. "This suggests that Uniontown has a significantly higher portion of minority and low‐income populations, which can be considered alarming. At the same time, the EJ indices for all selected environmental indicators, specifically for lead paint, are well above average compared to the state, the relevant EPA region, and the nation, meaning they require special attention."

Advocacy efforts for EJ communities can improve the quality of life of the residents of those communities.

Indeed, that is the entire purpose of the EJSCREEN tool – to identify areas that may be candidates for additional consideration, analysis, or outreach as the agency develops programs, policies, and activities. But while both Drs. Amiri and Zhao are hopeful the agency will provide Uniontown with the help it needs in the long term, they’ve already implemented some short-term initiatives to draw attention to the community’s issues.

"We contacted the state’s Office of the Governor, the Alabama Department of Public Health, and the Alabama Department of Environmental Management to inform representatives about our findings and to seek resources such as lead-testing kits and educational materials," says Dr. Amiri. "And we contacted Alabama’s state senators and house representatives to inform them of the citizens’ concerns, which ultimately resulted in a $23M grant from the U.S. Department of Agriculture’s Rural Development Office to improve Uniontown’s failed sewer system." They also educated community members about how to speak and write letters to their legislators and ask for change, requested donations from companies and local investors, initiated free clinic arrangements, and collaborated with a documentary filmmaker on a 10-minute documentary about Uniontown’s plight.

And the fight is not over – not for Uniontown, and certainly not when there are still countless EJ communities across the country desperate for help. "Environmental justice is the concept that all people and communities, regardless of their race and socioeconomic status, are entitled to enjoy an equally clean environment and resources," says Dr. Amiri, who along with Dr. Zhao offers a road map for her fellow nurses in "Working with an environmental justice community: Nurse observation, assessment, and intervention," published last month in the journal "Nursing Forum." "We recommend that nurses everywhere stand up for those communities and individuals affected by environmental injustice. Because small or large, advocacy efforts for EJ communities can improve the quality of life of the residents of those communities."