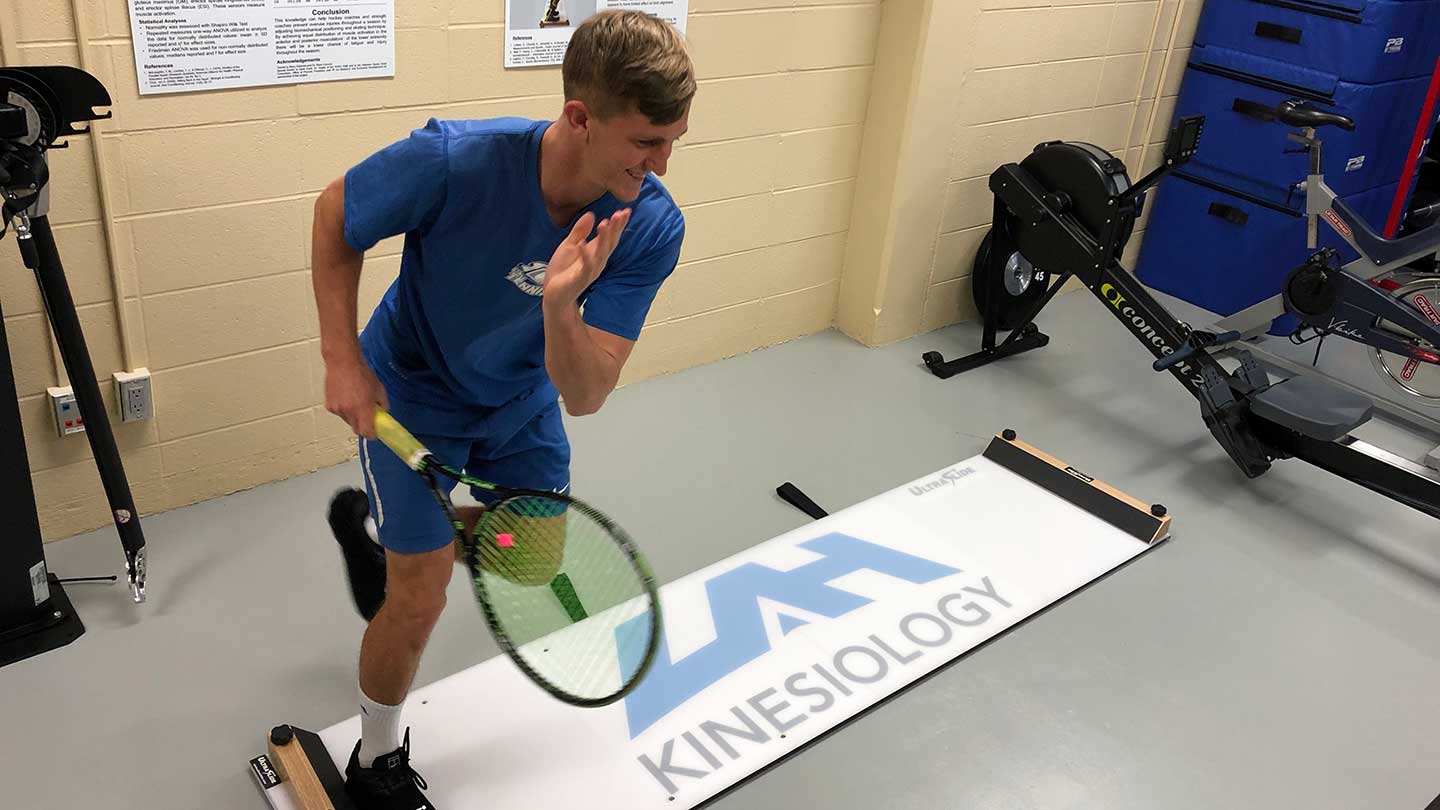 Senior kinesiology major and student athlete Noah Pring, shown here on the Department of Kinesiology’s slide board, will be presenting the results of his study on the effect of shin-torso alignment and biomechanical positioning on muscle activity of the lower extremity in ice hockey players at the National Conference for Undergraduate Research next month.

As a student athlete at The University of Alabama in Huntsville (UAH), Noah Pring has plenty of personal experience with the toll that playing sports at a high level can take on the human body. But after participating in UAH’s Research or Creative Experience for Undergraduates (RCEU) program, the senior kinesiology major and competitive tennis player can now claim research experience as well. He recently shared a poster of his findings, entitled “The Effect of Shin-Torso Alignment and Biomechanical Positioning on Muscle Activity of the Lower Extremity in Ice Hockey Players,” at the 2019 Annual Meeting of the Southeast Chapter of the American College of Sports Medicine. And later this spring, he will present them at the 2019 National Conference for Undergraduate Research, thanks to a UAH-sponsored travel award that covers his registration, travel, lodging, and some meals for the duration of the conference.

A native of England, Pring had long wanted to attend a U.S. university, and in particular one where he could play competitive tennis while pursuing a degree in sport science. “UAH got back to me within a couple of hours of me sending my information, and it just seemed like a good fit,” he says, citing UAH’s stellar academic reputation and its tennis team’s impressive record. “It was really a leap of faith, but it has worked out very well. The opportunities here are amazing!” 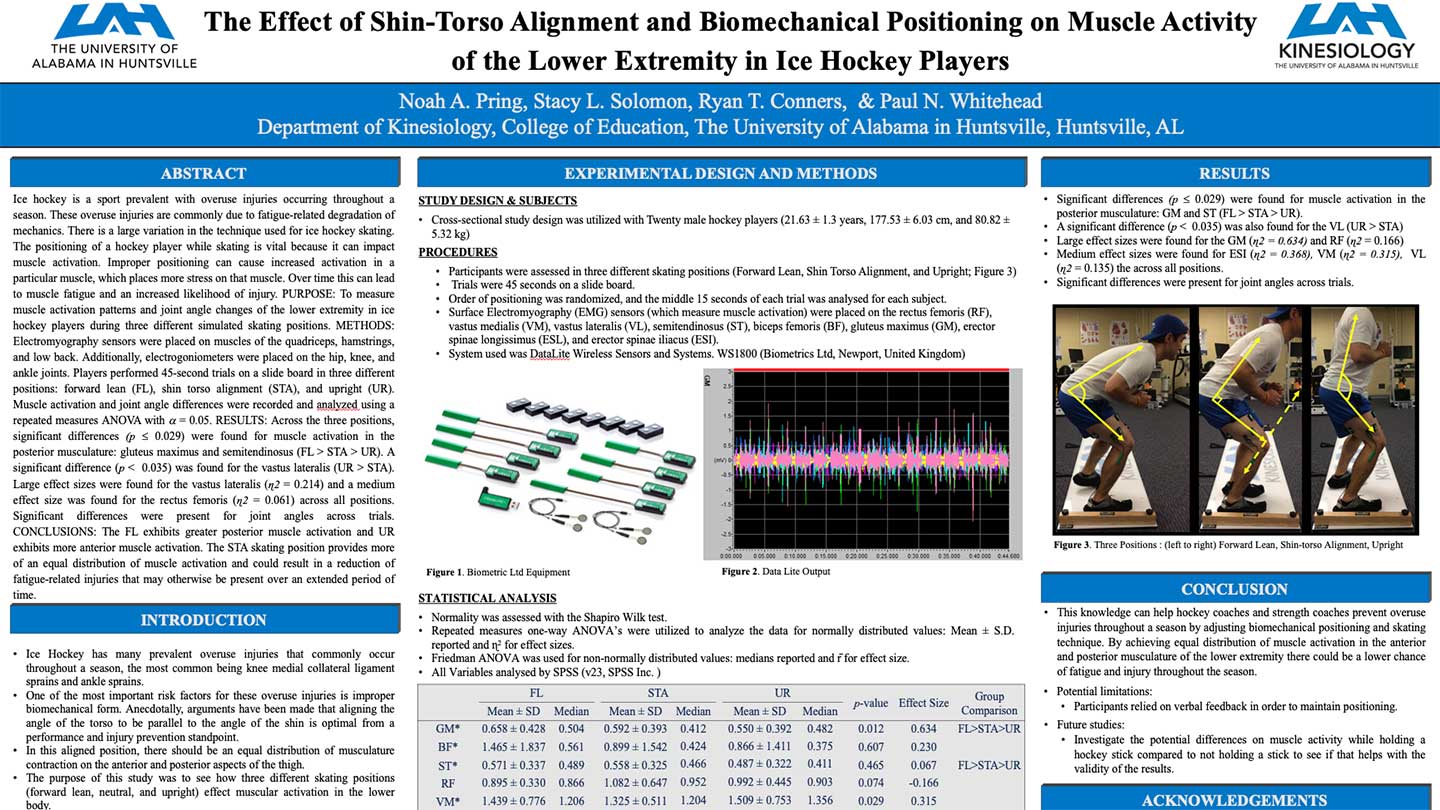 One of those opportunities happened to show up in his email inbox last spring, when he received a message from David Cook, UAH’s director of Undergraduate Research, asking if he would be interested in taking part in the RCEU program. Pring was intrigued, and reached out to Dr. Paul N. Whitehead, an assistant professor of exercise science in UAH’s Department of Kinesiology, for more information. “Dr. Whitehead’s RCEU project was on the shin-torso alignment of ice hockey players, so I applied to work with him, and was hired,” says Pring. “He told me his hypothesis and then said ‘Go and take that and make it yours.’ He was great at letting me be independent.”

Dr. Whitehead’s hypothesis was that overuse injuries common among ice hockey players, such as knee medial collateral ligament sprains and ankle sprains, could be mitigated by aligning the angle of the torso to be parallel to the angle of the shin. It stemmed from anecdotal evidence he had amassed while serving as a member of the Pittsburgh Penguins’ Sport Science and Performance team. “In this aligned position, there should be an equal distribution of musculature contraction on the anterior and posterior aspects of the thigh,” says Pring. “In other words, when compared to the forward lean and upright skating positions, there would be more balanced muscle activity in the lower extremity during a simulated skating stride when proper shin-torso alignment is used.”

To collect the data needed, Pring and his fellow RCEU student, nursing major Stacy Solomon, enlisted 20 players from the UAH ice hockey team. “We placed electromyography sensors on muscles of their quadriceps, hamstrings, and low back, and electrogoniometers on their hip, knee, and ankle joints,” he says. “Then we had the players perform 45-second trials on a slide board in three different positions – forward lean, shin-torso alignment, and upright – while we recorded and analyzed muscle activation and joint angle differences using a repeated measures analysis of variance.” 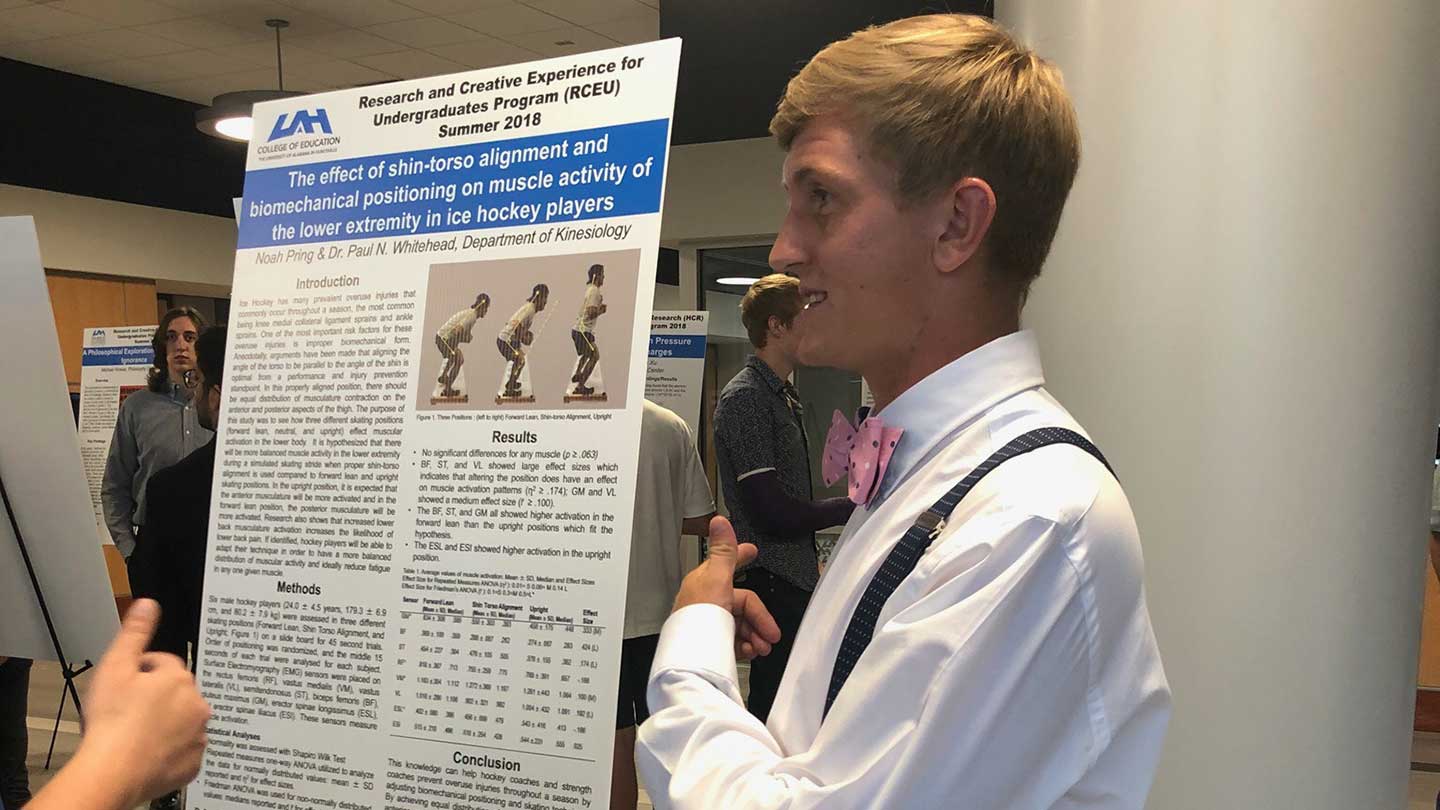 This past December, Pring was recognized with an award for his presentation during the College of Education’s Research Day.

They soon discovered they were on the right track, despite the small sample size. Their results showed that the forward lean exhibited greater posterior muscle activation, whereas the upright position exhibited more anterior muscle activation. By contrast, the shin-torso alignment provided more of an equal distribution of muscle activation, just as Dr. Whitehead had hypothesized. “While more research is needed, this showed us that the pilot study was successful,” says Pring. “With this knowledge, hockey coaches and strength coaches can help prevent the risk of overuse injuries throughout a season by adjusting players’ biomechanical positioning and skating technique.”

In the end, however, the study did more than just underscore the merits of proper biomechanical form. It also uncovered in Pring an untapped wellspring of interest in – and talent for – biomechanical research. “Noah applied with little knowledge of electromyography, but along the path from literature review to data analysis, he became very comfortable with the tools, and his ability to connect with the research participants made the data collection process smooth and enjoyable for the hockey guys,” says Dr. Whitehead. “He exceeded my expectations in his ability to grasp new concepts, find genuine interest in a new sport, and conduct a strong study. I often say he will be better at my job than I am one day!”

Indeed, just this past December, Pring was recognized with an award for his presentation with fellow kinesiology major Maggi Welch during the College of Education’s Research Day. The pair had partnered on a study to determine if athletes have a “home-field advantage” with regard to working out as part of Dr. Whitehead’s two-semester research in exercise science course. “Home-field advantage is really well looked at in terms of sports performance, but not as much with fitness aspects,” says Pring. “So we thought this would be an interesting spin on that and a realistic study that we could do in the time frame.” He’s also been sharing his newfound interest with his peers in the Department, helping them understand and operate the electromyography system. “Noah sets the bar high for his fellow students,” says Dr. Whitehead.

Now, with graduation around the corner, Pring has his sights set on earning an advanced degree in the field that will allow him to build on his undergraduate research experience. “I definitely want to stay in the U.S.,” he says. “That’s why going to these conferences is so great – I’ve been in touch with lots of good people.” And who knows? While slim, there’s even a chance the long-time tennis player may one day exchange his racket for a hockey stick. “I’d never seen ice hockey before I came to UAH as a freshman,” he says laughing, “but now I actually skate a little bit.”