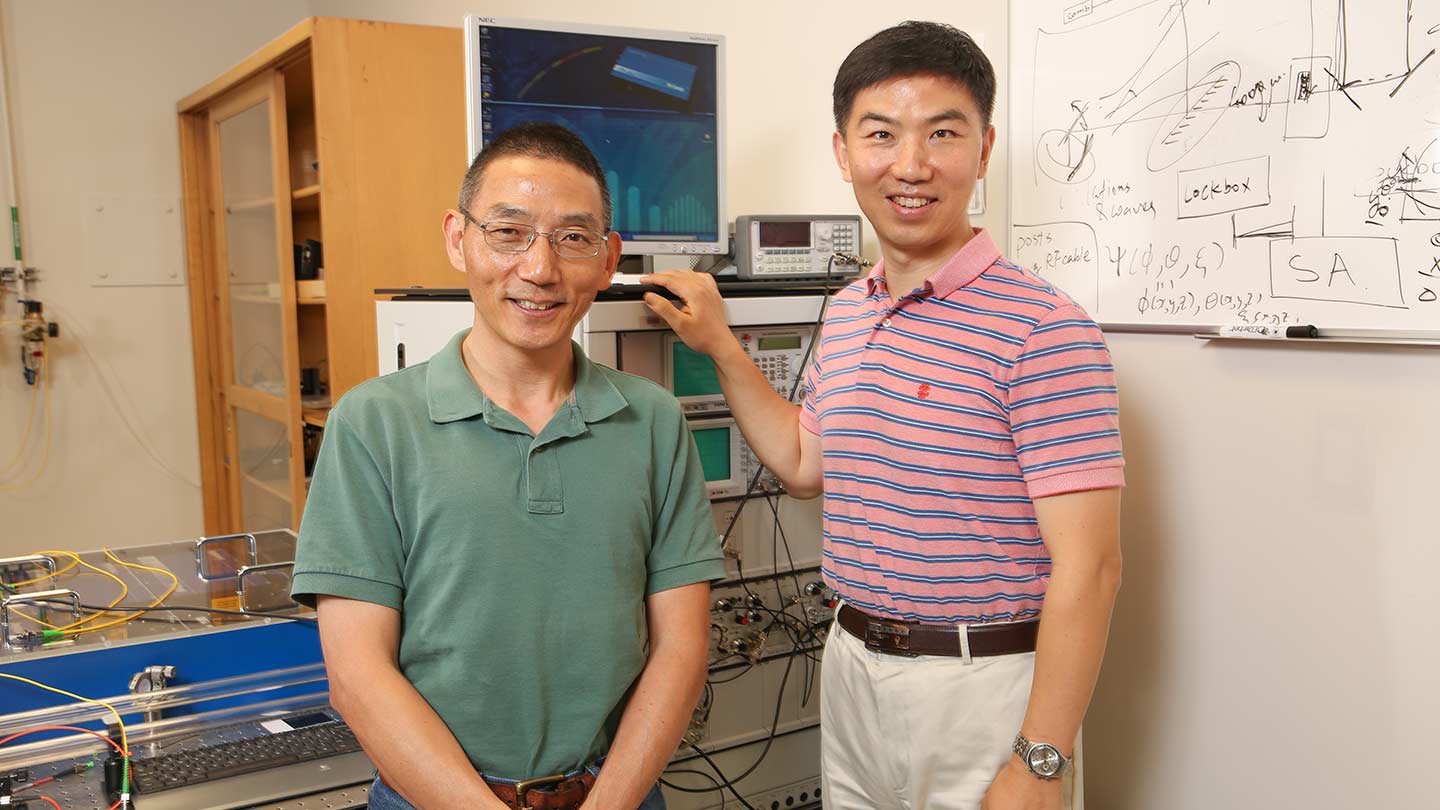 A pair of University of Alabama in Huntsville (UAH) researchers aim to explore fundamental properties of infrasonic optical sensors that could make them more sensitive and accurate over long distances.

The results of their research, which combines experiments and theoretical modeling, could impact future operation of these sensors in areas ranging from national security to Earth system science.

Fiber optic infrasound sensors, which operate at frequencies below 20 Hz, are useful for national security to monitor global nuclear weapon tests, as well as to measure changes in geological properties due to earthquakes, volcanic activities and the movements of glaciers. Fiber optic sensors are also widely used in other applications where the detection of very small changes in material structural properties over long distances is required. For example, they have been embedded into bridges, skyscrapers and other structures to monitor their condition.

We will explore the fundamental physics that set the ultimate limit of optical fiber sensors.

The two will conduct the first ultrahigh sensitivity experiments done on fiber optic sensors at such low frequencies in UAH’s Optics Building, which is specially designed to isolate their sensors from the effects of external disturbances. From 2013-2015, their work was supported by Cross-College Faculty Research funds from UAH’s Office of the Vice President for Research and Economic Development.

Most fiber-optic sensors rely on an optical effect called interference to probe tiny variations in the properties of interrogating light. Ideally, these properties of light, such as intensity and phase, are dependent only upon the external physical quantities to be measured – for example, pressure, temperature and stress. In reality, however, sensors themselves may also induce changes of these light properties, causing ambiguity in the measurement results and hence reducing the sensitivities of the sensors.

We will explore the fundamental physics that set the ultimate limit of optical fiber sensors, says Dr. Duan. With any fiber sensor, there is an intrinsic limitation of sensitivity. It is caused by spontaneous fluctuations inherent in the fiber and is governed by fundamental thermodynamic laws. In order to make very sensitive fiber optic sensors, we need to understand the physics underlying these spontaneous fluctuations.

The UAH team is especially interested in the low-frequency noise. Operating sensors at low frequencies under 20 Hz allows detection over much greater distances because the low frequency waves have longer wavelengths and can travel intact farther. Yet scientists have puzzled over why experimental sensors below 1 kHz do not operate within the theoretical noise parameters set by a thermodynamic model that works well at higher frequencies. At low frequencies, there is more noise in the laser signal within the optic fiber that affects their accuracy than the model would suggest.

But he quickly realized that theoretical effort alone is unable to completely solve the puzzle.

People were debating whether the thermomechanical model can explain their experimental data. But the reality is, there has not been any experiment that definitively shows how much spontaneous noise optical fibers generate at infrasonic frequencies, Dr. Duan says. What we really need is experimental work specifically designed to probe the low-frequency noise in optical fibers.

In the proposal submitted to NSF, he outlined an experiment that uses a novel hybrid sensor configuration to achieve what he say will be unprecedented sensitivity in the infrasonic region.

If this experiment succeeds, not only is it a significant advance in the understanding of the fundamental limit of fiber optic sensors, but the experimental technique will also offer a blueprint for future ultra-sensitive fiber optic infrasound sensors, says Dr. Duan.

Experimentation is only part of the research. To better understand the underlying physics, Dr. Duan teamed with Dr. Zuo, an expert in computational mechanics and materials modeling, to help develop a three-dimensional model for thermomechanical noise.

Fiber optic cables are made of a glass core and a polymer coating that respond in a visco-elastic and three-dimensional manner under dynamic disturbance, Dr. Zuo says.

We plan to develop a theoretical model for thermomechanical noise based on the three-dimensional response of the glass and the polymer coating. I will bring in some modeling tools for wave propagation in visco-elastic materials, and that is where mechanical engineering becomes a part of it.

Initially, we started a conversation just between two colleagues, and then we got those Cross-College Faculty Research grants that provided us the motivation to develop a formal proposal to NSF, Dr. Duan says. I thought it was especially beneficial that we could combine the strengths of the colleges of science and engineering.

Dr. Duan’s graduate student, Dipen Barot, is at work developing a new frequency locking system that will stabilize the interrogating laser for the future experiments. Experimental equipment acquisition should begin in August.

We want to measure this extremely small, low frequency noise, Dr. Duan says. There are a lot of scientific and engineering challenges that we need to address, for example, thermal and acoustic isolations, laser noise reduction, noise discrimination, etc.

It wasn’t done in the past, he says, because it is extremely difficult. But we are confident we have the best chance ever.