Soldier, educator, and public servant says political science is an “ideal major” for her line of work 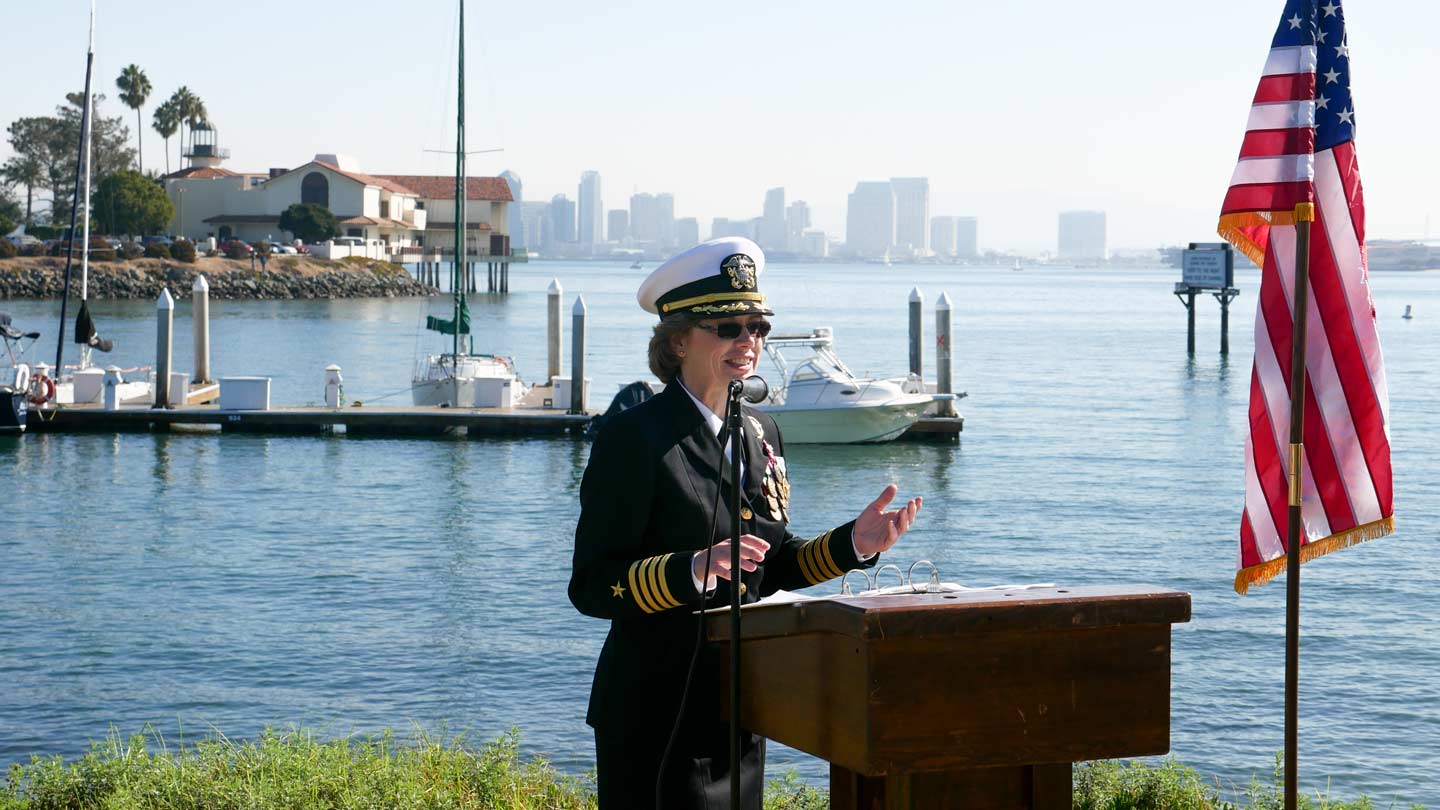 After spending almost 20 years as a political science professor at UAH, Dr. Kathy Hawk now serves as the branch chief for U.S. Indo-Pacific Command in the Office of the Undersecretary of Defense for Intelligence’s Combatant Command Intelligence Support Division.

It was a difficult decision to leave her position as an associate professor in the Department of Political Science at The University of Alabama in Huntsville (UAH) this past summer, but Dr. Kathy Hawk is happy to still be working in the field she had long been teaching: U.S. national security policy. This time, however, her office is in the heart of the Pentagon as the branch chief for U.S. Indo-Pacific Command in the Office of the Undersecretary of Defense for Intelligence’s Combatant Command Intelligence Support Division.

"I have an absolutely fascinating job," says Hawk, who also serves on active duty as a Navy Captain in her current position. "I honestly look forward to going into work each day because I am learning so much. I just wish I had more time to fully read everything that comes across my desk!" Her portfolio covers China and North Korea as well as countries spanning all the way to India.

The fact that her office is just around the corner from that of the Secretary of Defense – and she occasionally sees him in the hallway – doesn’t hurt either, she adds.

On a practical level, what Hawk does every day varies, but it frequently involves preparing the Undersecretary and his deputies for important meetings by pulling together background material, summarizing important issues, and developing "talking points" to make sure key items are covered. Hawk frequently attends these meetings with senior U.S. and foreign officials, takes notes, and then follows up to make sure questions are answered and decisions are implemented. 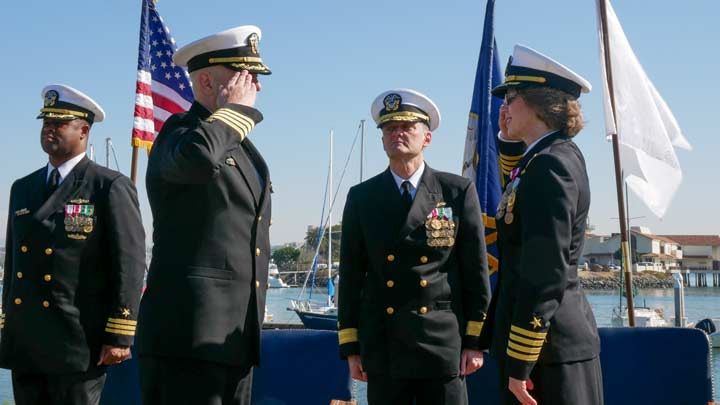 During Dr. Hawk’s Change of Command ceremony in San Diego on Nov. 18, she turned over her position as Commander, Naval Information Force Reserve Region Southwest, to another Navy Captain.

Occasionally Hawk also gets to plan overseas visits for senior leaders in her organization. She recently escorted the Deputy Undersecretary of Defense for Intelligence to meetings with the Commander of Indo-Pacific Command and the Commander of Pacific Fleet – both in Hawaii – and then on to meet with senior leaders in U.S. Forces-Korea and U.S. Forces-Japan as well as their foreign counterparts.

Hawk emphasizes that political science is an ideal major for this kind of job, and she notes students don’t have to join the military; most of the positions relating to national security policy and intelligence are filled by civilians. She also says that it is important to have people with a diverse range of perspectives on policy positions in the process. "If everyone thinks the same way," Hawk opines, "that is when I think we are headed for trouble!"

Hawk says she tried to prepare students in her classes for jobs just like she is in today. "I tried to stress how important critical thinking and reading skills are, and you really see it in a job like mine," she says. "Senior leaders make decisions off of what you put in front of them, and you have to know how to present a solid argument based on the most important points from the wide variety of material you are reading – and you have to learn how to separate sound analysis from biased opinion." Hawk also says she loved throwing students into the role of decision makers because it forced them to really process what they were reading.

Hawk also notes the importance of being able to clearly and concisely express an informed analysis to a group of people. "It is uncomfortable to get up in a classroom and have to present an argument to others; however, if you can learn to do it well, it is something that will set you apart from others," Hawk says. "In a job like mine, you have to be prepared to do it on a moment’s notice."

Hawk’s original orders to active duty were for one year, but after her office asked her to stay on for another, she decided to resign from her faculty position at UAH so that the Department of Political Science could hire someone else into her position.

"I loved teaching at UAH and working with students to help them think through academic and career issues, and I will really miss that," Hawk says. "And I hope students will continue to reach out to me, and I will do what I can to assist them." She notes that she has already hosted more than a half-dozen current and former students for lunch in the Pentagon when they were in the Washington, D.C. area. Hawk expects she will return to academia later in life, but likes the challenge of "being in the room" to help shape at least a portion of our country’s national security policy at the moment.

Now, perhaps more than ever, we really need people to engage in the process.

During her nearly 20 years at UAH, Dr. Hawk taught courses in U.S. national security policy, U.S. foreign policy, and international relations, as well as regional studies courses on Asia and the Middle East. Her research interests were in the areas of state building and national security and she published articles, reviews, and technical papers, as well as a full-length book entitled "Constructing the Stable State: Goals for Intervention and Peacebuilding."

From 2005 to 2012, she served as the departmental chair, and from 2012 to 2016, as the director of UAH’s Global Understanding Initiative. In the latter role, Dr. Hawk expanded the university’s efforts to enhance global activities and partnerships, and worked with Department of Defense colleagues to develop increased programming in the fields of security assistance, national security, foreign affairs, and intelligence.

"During her long tenure at UAH, Kathy Hawk’s effervescent personality brightened the professional lives of her departmental colleagues as well as those across the university campus and in the Huntsville community," says Dr. John Pottenger, current chair of the department. "Her optimism, energy, and intelligence – as well as her ‘open door policy’ – contributed in innumerable ways to the academic and employment success of her students and will continue to have long-lasting, valuable effects on the academic quality of the Department of Political Science’s undergraduate and graduate programs."

Like Dr. Pottenger, political science major Alyssa Posey won’t soon forget Dr. Hawk. "I had the pleasure of studying under her, and she proved to be a well-organized and effective educator," she says. "By frequently emphasizing the necessity of mastering professional and practical skills for success as well as stimulating interest in and constructive debate around sensitive national security and international relations issues, she made the class extremely valuable to political science majors."

But as appreciative as she is to have been able to learn from Dr. Hawk, Posey understands that she now answers to a higher call. "While I am grateful to have been her student," she says, "I’m also grateful that someone as knowledgeable and dedicated as she is entrusted to advise people with political power." The same is true for Dr. Pottenger. Though he will miss Dr. Hawk’s friendship and expertise, he says, "I know that her new endeavors and challenges in the nation’s capital will also serve the country well." 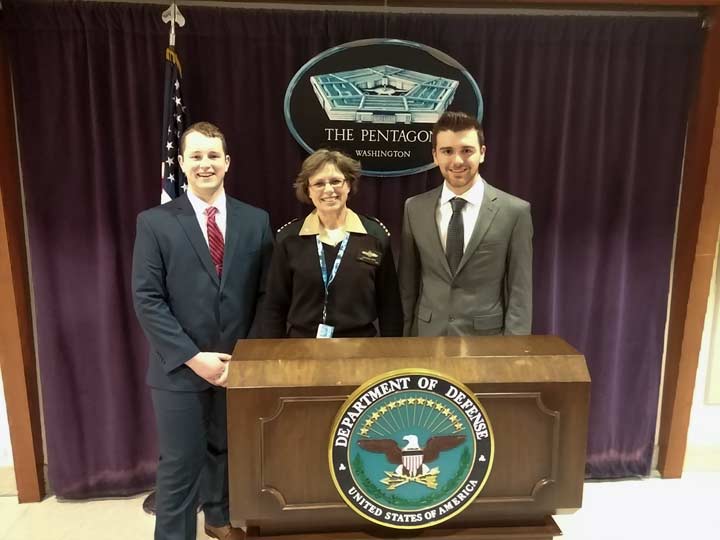 Dr. Hawk was deployed twice while at UAH, each time taking a leave of absence to fulfill her military service obligation as a Navy reserve officer. In mid-2007, she served a tour of duty in Iraq, where she worked as the Director of Engagements at the Special Forces Headquarters at the Balad Air Base. And beginning in late 2015, she spent a year managing a staff of more than 200 personnel at the Joint Task Force on Guantanamo Bay Naval Base in Cuba.

But while her professional trajectory has taken her from UAH, Dr. Hawk’s impact won’t soon be forgotten – not by her students, who benefited from her unique insight into America’s contemporary foreign policy, and certainly not by those who were inspired to follow in her footsteps and pursue a career in public service.

"I really sense there is a drive in many of the UAH students to do their part to make this a better world," says Dr. Hawk. "In spite of all of the political rhetoric being thrown around today, I admire those who are willing to enter the fray in order to improve our system of policy making. It is easy to stay on the sidelines and criticize others and the process, but that will not change anything. And now, perhaps more than ever, we really need people to engage in the process to shape it in a way that helps our country regain its balance and play a leading role in the world. If I played any role in helping to inspire someone to do that, that will be one of my proudest accomplishments!"