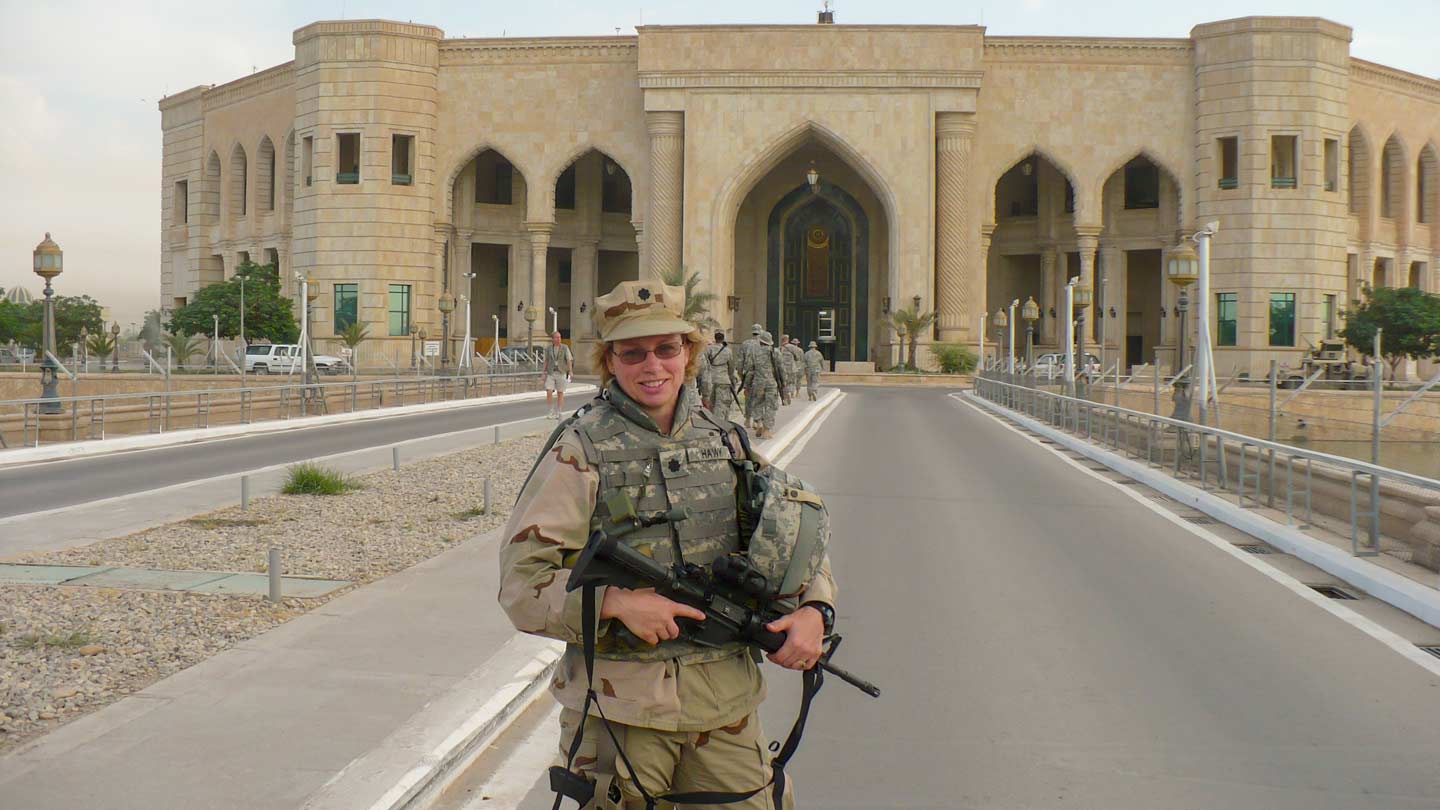 UAH political science professor Dr. Kathleen Hawk is also a commanding officer in the U.S. Navy Reserve. In 2007, she was deployed to Iraq to serve a tour of duty at the Special Forces Headquarters at the Balad Air Base.

Whereas most people tend to choose one career and stick with it, Dr. Kathleen Hawk has juggled two for most of her life. The Bismarck, N.D., native is both an associate professor of political science at The University of Alabama in Huntsville (UAH) and the Commanding Officer of a U.S. Navy Reserve intelligence unit supporting U.S. Strategic Command. But while these two paths may seem disparate, taken together they reflect a lifelong interest in and commitment to public service.

"Both my parents had been public servants and had run for assorted political offices, so I had always seen myself going into government service," says Dr. Hawk. Indeed, during her sophomore year at the University of North Dakota, she was awarded a Truman Scholarship, one of the nation's most prestigious awards for students interested in public service leadership.

"I used it to transfer to George Washington University, where it contributed to two years of undergraduate school and two years of graduate school," she says, adding that she also received a scholarship to play Division I tennis for the school. "It had the best combination of academics and proximity to Washington D.C."

That led to a bachelor's degree in political science, followed immediately by a master's degree in Latin American studies. "I spent five months in Costa Rica writing my thesis in which I examined the impact of the Nicaraguan Revolution on the country," says Dr. Hawk. "I was very interested in the politics of the region."

Soon after, she found employment back in D.C. as a press secretary for North Dakota's then-congressman. "I had interned with him for a summer in college and had played tennis with him, so when his press secretary left, he called me," she says. But what she really wanted was a job with the federal government.

I am continually amazed by the ability of students to deal with the complex intersection of policy, security, and moral dilemmas we face as a country. It reassures me that this country will be in good hands in the future.

"That's when I started looking into the Navy Reserve, to help me get a government position," says Dr. Hawk. She had been working as a contractor for the Department of Defense in the Multinational Programs Division of the Strategic Defense Initiative Organization when she was selected to receive a commission as a Navy Reserve officer.

A few years later, she sat for the notoriously difficult Foreign Service exam. "I took the written exam twice before I passed, but was fortunate to get through the oral interview the first time around," she says. But during her assignment at the American Embassy in Cairo, Dr. Hawk decided to leave the Foreign Service to get married, moving to northern Alabama and taking a teaching position at UAH while pursuing her doctoral degree in political science.

"I'd always planned to get my Ph.D., and once I did, I was hired into an open tenure track line at UAH," she says. She now teaches political science courses at both the undergraduate and graduate levels, and is the campus representative for the Truman and Boren public service scholarship programs. "I miss working on foreign policy issues with the government, but I very much enjoy the teaching part of my job."

And indeed, she still keeps her finger on the pulse of America's contemporary foreign policy. "My research focuses on trying to help societies in conflict move to stable, self-sustaining democratic societies," says Dr. Hawk. "I'm presently looking at several countries in the Middle East that went through changes of government during the 'Arab Spring' and trying to understand what the U.S. could have done better to help those countries through that transition." 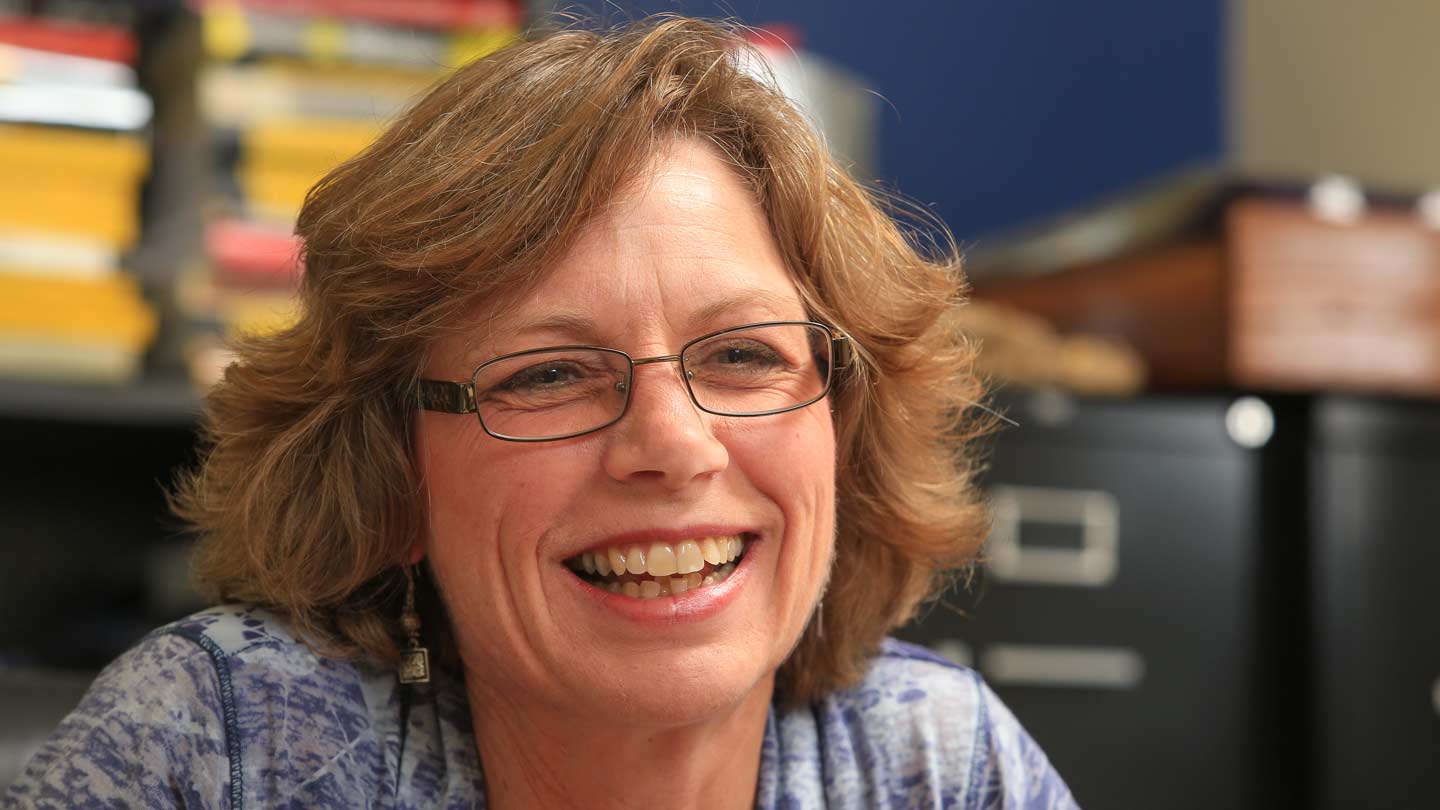 As an external actor, she continues, "the U.S. can only do so much." But what it can do going forward - which it hasn't done very successfully in the past - is work more closely with other countries and focus on more long-term goals. "I'm trying to create a blueprint of a democratization process that will move it from being seen as a 6-month process to a 12-year process," she says. "Because the 6-month process has resulted in chaos and brutality, and the countries have not become democratic."

That's something Dr. Hawk knows from personal experience, thanks to her other career as a Naval officer. In mid-2007, she was mobilized to serve a tour of duty in Iraq, where she worked as the Director of Engagements at the Special Forces Headquarters at the Balad Air Base. "It was fascinating," she says. "I was able to understand a lot of the challenges that were arising based on the academic research I was doing."

And she'll have the chance to do even more field research this fall, when she will again be deployed, this time to Guantanamo Bay Naval Base in Cuba. Among the many duties she will have, the one she is most looking forward to is being a military liaison. "Because the Obama administration is trying very hard to close the detention facility before the end of his term," she says, "I expect that I will get to work with people from the State Department, the Justice Department, and the White House."

As before, the approximately 10-month tour will require Dr. Hawk to take a leave of absence from UAH. But while she'll be stationed almost 1000 miles from Huntsville, the focus of her job will in many ways feel like familiar territory. "I think my academic background in international relations and public policy will allow me to effectively contribute to what we as a country are trying to accomplish," she says.

And after she returns? Dr. Hawk's two careers will intersect once more. "I'll be able to bring those experiences in Guantanamo back to the classroom, albeit on an unclassified level, and challenge my students to think through the issues for themselves," she says.

It's likely she will also inspire some to pursue their own careers in public service. In fact, given what she's seen of tomorrow's leaders, she is hopeful that will be the case. "I am continually amazed by the ability of students to deal with the complex intersection of policy, security, and moral dilemmas we face as a country," Dr. Hawk says. "It reassures me that this country will be in good hands in the future."