For the first time a solar switchback has been directly observed that confirms 2020 models by astrophysicist Dr. Gary Zank at The University of Alabama in Huntsville (UAH) that theorized how these surprising structures in the solar wind originate.

The European Space Agency’s Solar Orbiter spacecraft directly observed the switchback on March 25, when its Metis instrument recorded an image of the solar corona that showed a distorted S-shaped kink in the coronal plasma that piqued the interest of Dr. Daniele Telloni, National Institute for Astrophysics, Astrophysical Observatory of Torino, Italy, who thought it looked like a solar switchback. Switchbacks are large and long-duration isolated velocity spikes in the solar wind.

“A switchback is basically a propagating kink in a magnetic field, with the most extreme case being an almost S-shaped kink in the field line that reverses its direction twice,” says Dr. Zank, director of the Center for Space Plasma and Aeronomic Research (CSPAR) and the Aerojet Rocketdyne chair of the Department of Space Science at UAH, a part of the University of Alabama System. “In other words, it’s a somewhat complicated wave with an unusual wave form.”

Researchers were mystified by the unusual structures when they were first inferred by data collected by the Solar Wind Electrons Alphas and Protons (SWEAP) instruments aboard NASA's Parker Solar Probe, an instrument suite featuring a Faraday cup developed by a partnership of UAH with NASA's Marshall Space Flight Center and the Smithsonian Astrophysical Observatory (SAO). The cup is the only Parker Solar Probe instrument that sits outside the spacecraft’s heat shield, directly sampling particles from the super-hot solar wind.

Parker Solar Probe’s daisy petal-like orbit circles the sun in the same plane as the planets, while Solar Orbiter crosses the sun’s poles.

Using the Parker Solar Probe data that first brought switchbacks to light, the conditions and manner in which they are created were theoretically modeled by Dr. Zank with collaborators Dr. Masaru Nakanotani, a CSPAR postdoctoral research assistant; Dr. Lingling Zhao, a Department of Space Science assistant professor; Dr. Laxman Adhikari, a Department of Space Science research scientist; and Dr. Justin Kasper, an astrophysicist, then at the University of Michigan. 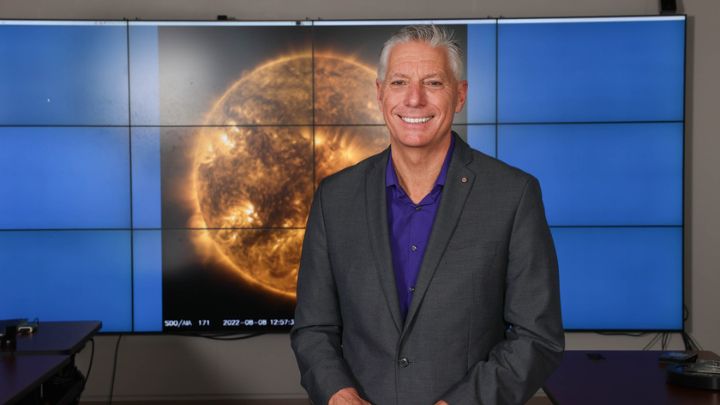 Dr. Gary Zank says that seeing an image of the global structure of a switchback was both unexpected and remarkable.

Recalling Dr. Zank’s earlier paper, Dr. Telloni compared Metis’ visible light image with one taken by the craft’s Extreme Ultraviolet Imager instrument. He noted that the event was located above an active region where the solar plasma’s speed was low, conditions that had been modeled in Dr. Zank’s research.

“When Daniele sent the Metis observation, my immediate reaction was of some astonishment that such a plasma structure could be so clearly observed using remote observations,” says Dr. Zank, who is also a co-investigator on the Solar Orbiter’s magnetometer team.

“Unlike plasma measurements that make point measurements locally and temporally, Metis provides a global observation of the full structure. So, to see the global structure of a switchback was both unexpected and remarkable after staring at plasma plots and inferring the geometry of a switchback indirectly,” he says. “This is a very strong confirmation of the basic theory I had advanced in our Zank et al 2020 paper.”

The new observation resulted in an American Astrophysics Letter authored by Dr. Telloni with Dr. Zank and others as co-authors.

“In the new Letter, we explored all the current theoretical models that have been advanced to explain the origin of switchbacks and showed quite definitively that all made predictions that were not observed,” Dr. Zanks says.

Back when SWEAP made the first observations of switchbacks close to the sun, it found a remarkably large number of them.

“This was one of the main conclusions of the first discovery paper that many of us at UAH were involved in,” Dr Zank says. “The interpretation of the SWEAP plasma and corresponding magnetic field observations revealed that we were observing multiple switchbacks, and at that point, the need to develop a theory to explain their origin became quite critical.”

Dr. Zank’s team theorized that switchbacks originate due to the reconnection of the solar magnetic field above the surface of the sun. That explained what SWEAP observed, and a statistical comparison of the theory with SWEAP observations was performed.

Now that the origin mechanism appears to be understood and confirmed, Dr. Zank says investigators need to understand the statistical character of an ensemble of many switchbacks.

“There is a natural explanation from the theory for seeing bursts of multiple switchbacks but the nature of the distribution is not understood,” he says.

The new work is one of the first examples of several yet to come that combine the observations of the Parker Solar Probe and Solar Orbiter.

“This has proved to be a very promising combination of data sets that is opening interesting and important new avenues in understanding the radial and temporal evolution of structures and events that has not been possible before,” Dr. Zank says. “This Letter, using now both in situ observations combined with remote sensing observations, is something of a trailblazer in developing exciting new approaches in making and interpreting observations.”