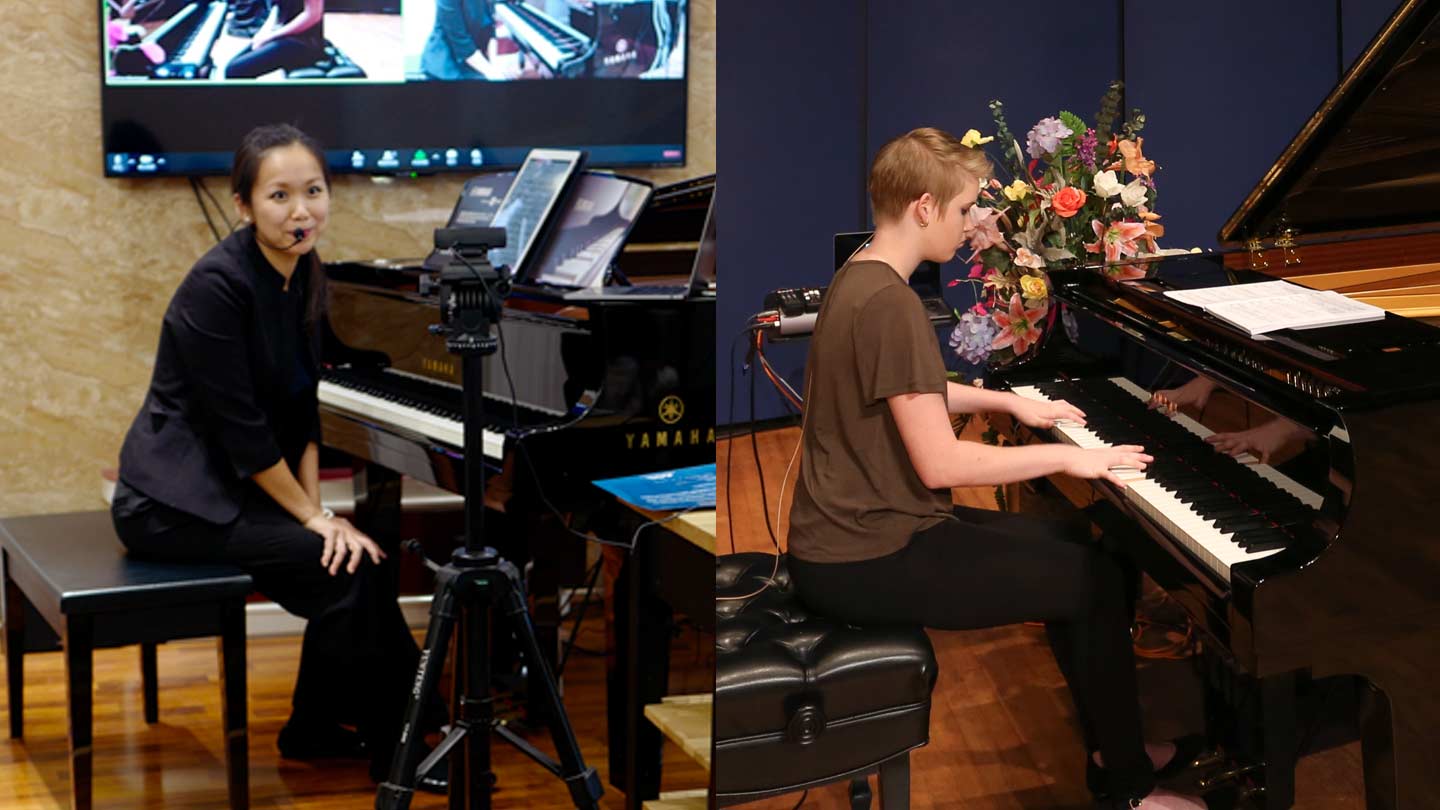 Last week, the Department of Music at The University of Alabama Huntsville (UAH) showed the world how cutting-edge technology is fundamentally changing the way students learn piano by becoming the first U.S. university to connect an internet-enabled Yamaha Disklavier CFX concert grand piano with a counterpart in Beijing, China.

During the event, Dr. Ka Man "Melody" Ng, assistant professor of piano at UAH, instructed students in Roberts Recital Hall on the UAH campus by playing a Disklavier CFX piano in Beijing while UAH’s Disklavier CFX piano recreated the performance in real time, with the instrument’s keys and pedals moving up and down. Dr. Ng, in Beijing, and the students, in Huntsville, were then able to converse about the lesson over video chat, performing back and forth to one another as if they were sitting on the same piano bench in the same room.

"This historic exchange created an amalgamation of arts and technology through the language of music, bridging cultures and people beyond borders," says Dr. Ng, who was joined in Beijing by Dr. C. Dave Ragsdale, chair of the Department of Music. Like her, he was also moved by the transcendent nature of the event, which he describes as not just "connecting musical instruments around the world, but also connecting humans to one another through music." The result, he says, "is the future of music education, and UAH is leading the way."

The piano was acquired last year to celebrate the Department’s 50th anniversary and is dedicated to enhancing the university’s distance-learning opportunities through its remote-lesson capability. This advanced technology enables highly nuanced performance data – the actual keystrokes and subtle pedal movements made by a performing artist – to be transmitted back and forth between similarly equipped instruments over the internet, with perfectly synchronized video streaming between the two locations. Thus, as an artist performs on a Disklavier in one location, the remotely connected Disklavier in a different location recreates the performance in real time, with the instrument’s keys and pedals moving up and down, capturing the subtlest nuances.

With this remarkable distance-learning capability, UAH can now conduct transcontinental piano lessons, master classes, and performances between two internet-connected Disklavier pianos, enabling students to receive instruction remotely, from top international artists and educators located throughout the country and around the world. It will also allow UAH to better recruit students residing in China, by having them record and transmit their audition performances over the internet through the use of a Yamaha Disklavier. These virtual auditions will then be recreated on the remote Disklavier piano at UAH for evaluation, with each note and nuance delivered faithfully and precisely as the artist intended.

"The acquisition of the Yamaha Disklavier CFX uniquely fits our mission – and the DNA of the university and our community – by grounding our music students in a traditional music education with a technological thrust to fully equip them for 21st-century careers," says Dr. Ragsdale. "And while Huntsville is ‘the Rocket City,’ it’s also bubbling with art enthusiasts and music lovers. With the technology side of music becoming the calling card of the Department of Music, we can deliver quality programs in the sciences and the arts to our students and our community."