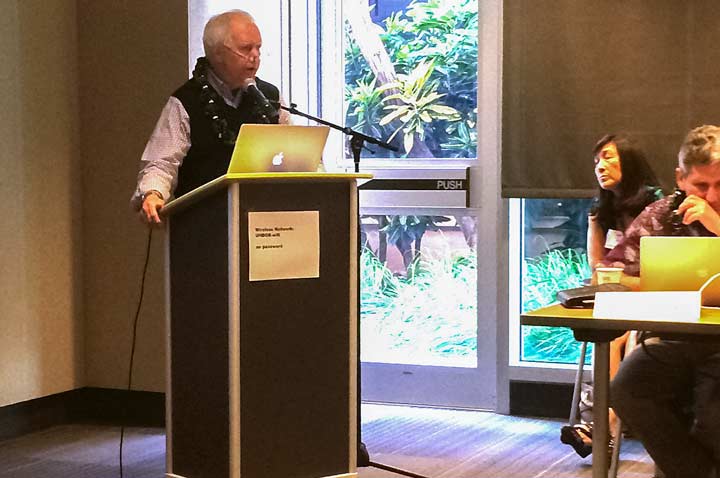 It’s a collaboration that sprang from national attention drawn to the cooperation between industry, academia, Huntsville City Schools, Cyber Huntsville and others in the community to support local school systems and their cyber programs.

"This whole relationship with UH started out to help them start a funded cybersecurity program but it has quickly evolved into the University of Hawaii System and the State of Hawaii wanting to know how our community works within itself to get cyber education and cyber activity involvement within the school system and in the community as a whole."

UHM is currently operating as a subcontractor to the UAH CyberCorps SFS program, providing funding for two doctoral students and one undergraduate there.

"Right now, they are operating a Scholarship For Service program, but they are under subcontract to UAH," says Dr. Vaughn, who is overseeing the UH effort for the NSF. "You might even call it a mentorship relationship, since this way they are already working with a very successful university."

During his career as a military officer, Dr. Vaughn was assigned to the National Security Agency (NSA) and later remained involved with both NSA and the National Initiative for Cybersecurity Education as he led the cybersecurity program and research effort at Mississippi State University.

"After arriving at UAH in May of 2013, I continued the relationship and introduced NSA and the National Institute of Standards and Technology (NIST) to the substantial cybersecurity efforts ongoing in Huntsville," Dr. Vaughn says. "These included the academic programs at UAH, the annual cybersecurity summit held at the Von Braun Center and the strong cybersecurity program in the Huntsville and Madison city and county school systems."As their knowledge about the area grew, NSA and NIST became interested in learning more of about how the Huntsville community fosters its collaborative community effort.

"NSA and NIST visited Huntsville on several occasions and participated in cybersecurity workshops hosted by District 8 State Board of Education President Pro Tem Mary Scott Hunter. NIST conducted a cybersecurity framework workshop for the community that was hosted at UAH and participated in planning and supporting the National Cyber Summit that’s held here annually," says Dr. Vaughn. "The NIST and NSA support of the cybersecurity summit quickly elevated the summit from a regional event to a national event attended by a broad base of industry, government and academia."

The cohesiveness has proven attractive.

"We’re tightly integrated in this community," he says. "That’s what the UH System really liked."

Increased visibility resulted in an NSA request for a May 2016 visit to Hawaii by UAH and Huntsville City Schools officials. There they discussed the Huntsville programs and collaborations with the University of Hawaii, NSA Hawaii, the Hawaiian Board of Education and Hawaii State Sen. Donovan M. Dela Cruz, who currently serves as State Senate majority whip, vice chair of the Committees on Ways and Means and Transportation and Energy, and is a member of the Committee on Education.

"The purpose of the visit was to see if the Huntsville model might work well in Hawaii and assist them in developing and retaining cybersecurity talent on the islands," Dr. Vaughn says. "As a result of that visit, the NSF awarded a small grant to UAH to work directly with UH to assist in developing an NSF Scholarship for Service program."

Dr. Vaughn went to Hawaii in late August 2016 to work with faculty to develop and submit the NSF proposal for a UH CyberCorps SFS program. The grant was awarded and will begin in the fall semester 2017.

"During this visit I met with others in the UH System who wanted to know more about the details of the Huntsville program," says Dr. Vaughn. He invited them to visit Huntsville.

"They also toured the College Academy and left quite impressed with what this community has been able to do," Dr. Vaughn says.

Continuing the effort to port the Huntsville model to Hawaii, Dr. Vaughn has invited Hawaii Sen. Dela Cruz to visit locally and he is expected to do so in the near future.

"I think this story reflects great credit on our community and demonstrates how working together can accomplish so much," says Dr. Vaughn. "It’s a real honor for Huntsville to garner this much attention nationally and for another state to be looking at our model of success."