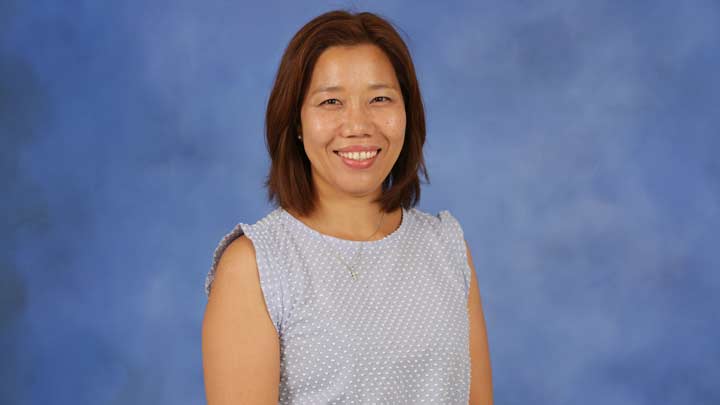 An accomplished pianist, Sun Goodloe is pursuing a Bachelor of Science in Business Administration in Information Systems with a cybersecurity concentration.

The desire for a more secure life led a U.S. Army Gold Star widow who is a dedicated musician to discover a new talent for cybersecurity through a Gold Star Assistance program sponsored by the National Security Agency at The University of Alabama in Huntsville (UAH) Center for Cybersecurity Research and Education (CCRE).

A Gold Star family is a military family that has lost a loved one during military service.

Initially uninterested, Sun Goodloe eventually went on to earn a cybersecurity Scholarship for Service (SFS). The SFS program is administered and funded by the National Science Foundation in cooperation with the U.S. Office of Personnel Management. She is studying at UAH for a Bachelor of Science in Business Administration in Information Systems with a cybersecurity concentration and is working as a CCRE research assistant.

An accomplished pianist who holds a Bachelor of Music degree from the Keimyung University in Daegu, South Korea, Goodloe has been the recipient of the International Culture Exchange Association Grant, the Korea Times Scholarship and the Korea Herald Scholarship. She serves as an educator and member of the Music Teachers National Association (MTNA), where she has been training young students since 2013.

“My entire career is music. I never thought about studying in any other areas besides music,” she says. “I was a very famous pianist in my town and city.”

She lost her husband, Army Chief Warrant Officer 2 Edward Goodloe, to cancer in February 2011 while he was on active duty. The couple met in 2000 at Camp Walker in South Korea. She has two children from the marriage, Brianna and Edward Goodloe, ages 17 and 13 respectively.

“I prayed to God hoping that He would save my husband’s life, but it did not happen,” Goodloe says.

“I was only 34 years old and I had just moved to America with two young kids. They were only 3 and 7 years old. I barely spoke or understood English so I always had to request for an accompanying translator wherever I went because of my lack of English.”

Her path forward has been discovered through drive and motivation.

“To survive in another country with a different language and culture was not easy to deal with as a single mom, foreigner and widow,” Goodloe says. “I went through heavy hardships at an early age. But I was blessed enough to open my eyes to see the real world.”

Concern that a music career in the U.S. might not guarantee her children’s future without financial help spurred Goodloe to complete Business Administration general study at Calhoun Community College with a 3.97 GPA. Because she struggled with English, she had to put in double and even triple the amount of studying to pass her classes.

“There was no free time. I kept all 25 of my piano students and took care of my two kids all by myself. Also, I worked at my church as music director and secretary at the same time,” she says.

“For some of the classes I had to record the lesson and listen to it over and over again until I got it. There were no easy classes for me. It was always challenging and frustrating. I just wanted to understand the materials so that I could pass. By studying over and over again I received good results. My achievement meant a lot to my kids because they saw their mom studying, teaching, working and taking care of them. They learned from my perseverance.”

“I was not very interested in that meeting because I was studying at Calhoun Community College,” Goodloe says. “However, I attended two meetings with other survivors and I was very inspired by Ms. Johnson’s kindness and passion for survivors. She was trying to help survivors to get a better future by introducing cybersecurity training.”

The meetings sparked a request for a private conference.

“I asked Ms. Johnson to meet me personally because I wanted to know more about it and I needed some advice from her,” Goodloe says. “It was an amazing meeting because she opened her mind to me. I thought I was the one who was always afraid of a new environment/situation. She continued to encourage me to study cybersecurity, but I could not give her an answer because I was scared.”

Eventually Goodloe warmed to the idea of cyber studies.

“I decided to move forward to a better future. I had heard about cybersecurity in the media and about how serious it is, but I did not pay attention,” she says. “I thought that studying cybersecurity would give me an opportunity to distribute my knowledge and my efforts to my community or country after I achieve this degree.”

Her high GPA provided an opportunity to apply to the SFS program at UAH while she was still at Calhoun.

“I was very afraid of applying because, again, I was not sure I could do this. I was so lucky that I had so many supporters to apply for this scholarship: Ms. Johnson, Ms. Branson, family friend K.C. Bertling, Athens State University Computer Science Instructor Nisheeth Agarwal and Huntsville Baptist Church Formal Senior Pastor Junho Chi. I was able to decide to apply for this scholarship because of their support to move forward,” Goodloe says.

“My biggest supporters through all of this were my mother, father, brother and my husband from heaven. My family is in South Korea, but they have always been proud of me no matter where I am.”

While technology has a big impact, is convenient and makes life easier, there’s a downside that needs to be protected, Goodloe says.

“Gaining cybersecurity knowledge can help us protect ourselves from bad guys. If I can protect or help this community and country with my knowledge, why not?” she says.

“I was also interested in learning cybersecurity because it is useful worldwide despite language barriers. There is also a huge shortage of cybersecurity professionals and the problem is only going to get worse if more people don't enter the field. I want to help solve this issue. I want to make a positive impact with my knowledge.”

She also looks forward to working in a valuable job that secures her future and finances.

“I feel good knowing that I can protect so many people by protecting their privacy and giving back to my country. Studying cybersecurity makes me feel like a very worthy and valuable person,” she says.

“Not only that, I feel that I can be a good model for my two kids. It is not easy. It's never going to be easy. But I will not give up. Studying cybersecurity has turned my weakness into my strength.”