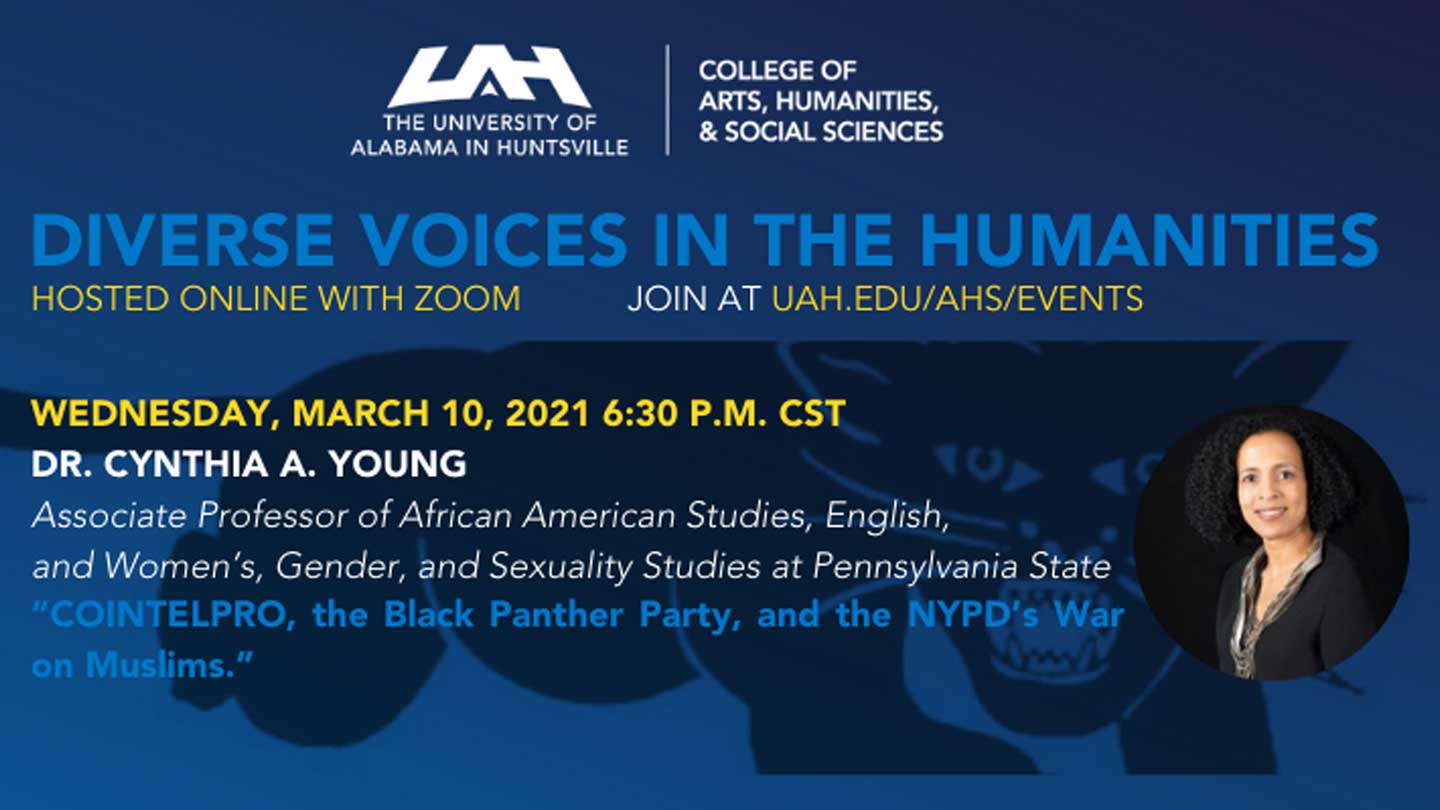 The webinar is offered under the auspices of the UAH College of Arts, Humanities & Social Sciences and its "Diverse Voices in the Humanities" Speakers Series. It will take place as a Zoom event on March 10 at 6:30 pm. The talk was organized by the UAH Departments of English, History and Philosophy and funded by the UAH Humanities Center, as well as the Distinguished Speaker Series.

Dr. Young is Associate Professor of African American Studies, English and Women's, Gender and Sexuality Studies at Penn State. Prior to that she was on the faculty of Boston College, where she directed the African and African Diaspora Studies Program. She is the author of "Soul Power: Culture, Radicalism and the Making of a U.S. Third World Left." She also was a contributor to an exhibition titled "Witness: Art and Civil Rights in the Sixties" at the Brooklyn Museum in New York that focused on painting, sculpture, graphics and photography from a decade defined by social protest and American race relations.

Dr. Young's talk is titled, "COINTELPRO, the Black Panther Party, and the NYPD's War on Muslims." The discussion will consider the parallels between the New York City Police Department's war on the Black Panther Party and on Muslims. The presentation argues that the NYPD road-tested and perfected many of the tactics it used after 9/11 decades earlier in its drive to contain domestic dissent and the wave of popular uprisings that occurred after 1968.

Dr. Dylan Baun, Assistant Professor of History at UAH, and one of the organizers of the Diverse Voices in the Humanities series, stresses the significance of this talk and Dr. Young's expertise: "The through line of the FBI's spying on the Blank Panther Party in the 1970s and the NYPD's spying on Muslims in the 2000s is a disturbing one, to the say the least. I know few better placed in the field than Dr. Young to connect these dots, as well as explore the histories, legality and legacies of policing communities of color in the United States."

The webinar will be presented via Zoom and requires registration. The Digital Speakers Series seeks to directly address contemporary issues and events. This series highlights how the humanities can contextualize and explain current issues, particularly in relation to race relations, health disparities and the rise of fascism/authoritarianism and beyond. The invited speakers will present virtual lectures, hosted via Zoom or Zoom webinar, that will be accessible to all UAH students, faculty and staff, as well as people from the Huntsville community.