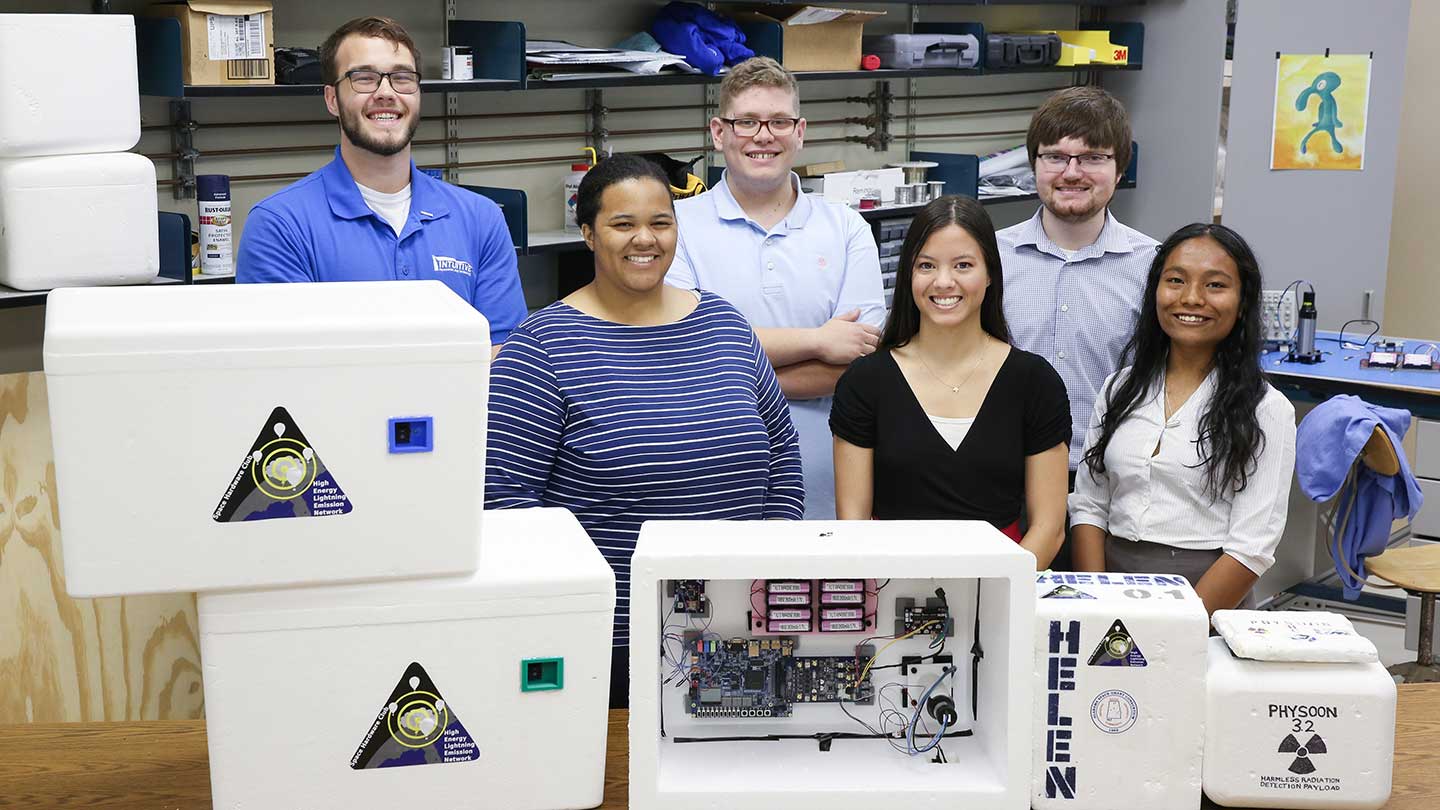 Student members of the Space Hardware Club at The University of Alabama in Huntsville (UAH) are preparing to launch weather balloons into thunderstorms to try to directly observe the terrestrial gamma ray flashes (TGFs) storms generate.

The High Energy Lightning Emission Network (HELEN) project uses the balloons to hoist aloft a network of sensor devices to measure intense bursts of gamma rays produced in the atmosphere.

Scientists think intra-cloud and positive cloud-to-ground lightning are correlated with the rays. Leading theories suggest strong electric fields inside of thunderstorms can become momentarily destabilized by a stroke of lightning, which causes the acceleration of electrons in the opposite direction of the electric field. But the origin of the electric field, TGF propagation characteristics, and TGF source location are still unknown.

“HELEN's goal is to directly observe terrestrial gamma-ray flashes in order to verify scientific models of TGF formation and to determine the neutron fluence of TGFs,” says team lead Christopher Helmerich, a physics graduate student. “This has been a very challenging project, and to see it all come together successfully has been very rewarding. I am very proud of the team and all the work they have put in.”

Besides Helmerich, the HELEN team is:

The HELEN team is aiming for 8 to 10 thunderstorm flights over the course of the next year.

“That would give us a very good chance of detecting something interesting,” Helmerich says. “We are aware of one or two groups at other universities investigating this method of TGF research and we would be very excited if our team of mostly undergraduates was to make a valuable contribution to the field.”

The complex endeavor means the team has had to drill to prepare for it.

“We have to launch four weather balloons simultaneously near a thunderstorm. We have planned out the events and timeline leading up to the launches very carefully and have had multiple training flights with our flight crew, so that they are familiar with the launch process,” he says.

The crew will identify potential launch opportunities a couple of days in advance and the time of launch will be refined as the launch window gets closer. A briefing to review weather forecasts, determine exact meeting times, and prepare will be held 12 to 24 hours before launch.

“For flights during the semester, we will have a 12-hour window from noon to midnight in which we will consider launching so that we reduce interference with students' life schedules,” Helmerich says.

HELEN is funded through SHC, which includes in its sponsors the Alabama Space Grant Consortium (ASGC), the UAH College of Engineering, the UAH Department of Physics and Astronomy, the UAH College of Science, and the UAH Office of the Vice President for Research and Economic Development.

NASA advisors to the HELEN team from the National Space Science and Technology Center (NSSTC) at UAH are Dr. Michael Briggs, assistant director of the UAH Center for Space Plasma and Aeronomic Research (CSPAR) and deputy principal investigator of the Fermi Gamma-Ray Burst Monitor, and Dr. Oliver Roberts, a member of the NASA Gamma-Ray Astrophysics team at NSSTC and the Universities Space Research Association.

“EFMs consist of two metal spheres that are spun around a rod by a motor. In a strong electric field, these spheres gather charge that can be measured by components on a printed circuit board (PCB) inside one of the spheres.” Helmerich says. “The PCB also has an inertial measurement unit on it that records which direction the EFM spheres are pointing. From the data across all our EFMs, we can determine, over the course of the flight, the structure of the electric field around the thunderstorm.”

“We then use a photomultiplier tube to capture the light from the scintillator and turn it into an electrical signal,” Helmerich says. “That signal is processed by our custom data acquisition system, which includes a high-speed 150 million samples per second analog to digital converter (ADC), a field programmable gate array and a processor running Linux. The data is then stored on an onboard SD card.”

Using this setup, the HELEN team will be able to determine the energy and type of each radiation event in the detector.

“Unlike most radiation data acquisition systems, ours is able to process and store raw ADC data from each radiation event,” he says. “This is important during the detection of a TGF, since we will need to capture many events in a very short amount of time.”

“Team members did have some prior experience with radiation detector assembly and PCB creation from previous SHC projects, but HELEN helped develop and refine many of those skills,” Helmerich says. “In addition to the technical challenges, the organization of flight operations for launching four balloons simultaneously took a lot of careful thought and planning.”

“I have learned that the most important task for any leader is to enable the members of the team to do amazing work. A leader needs to be able to acquire necessary resources, build team fellowship, bring the best out in each member and help build team members’ skill sets,” he says. “A leader should also be more invested in the well-being of individual members than in the member’s commitment to the project, especially in a university environment.”