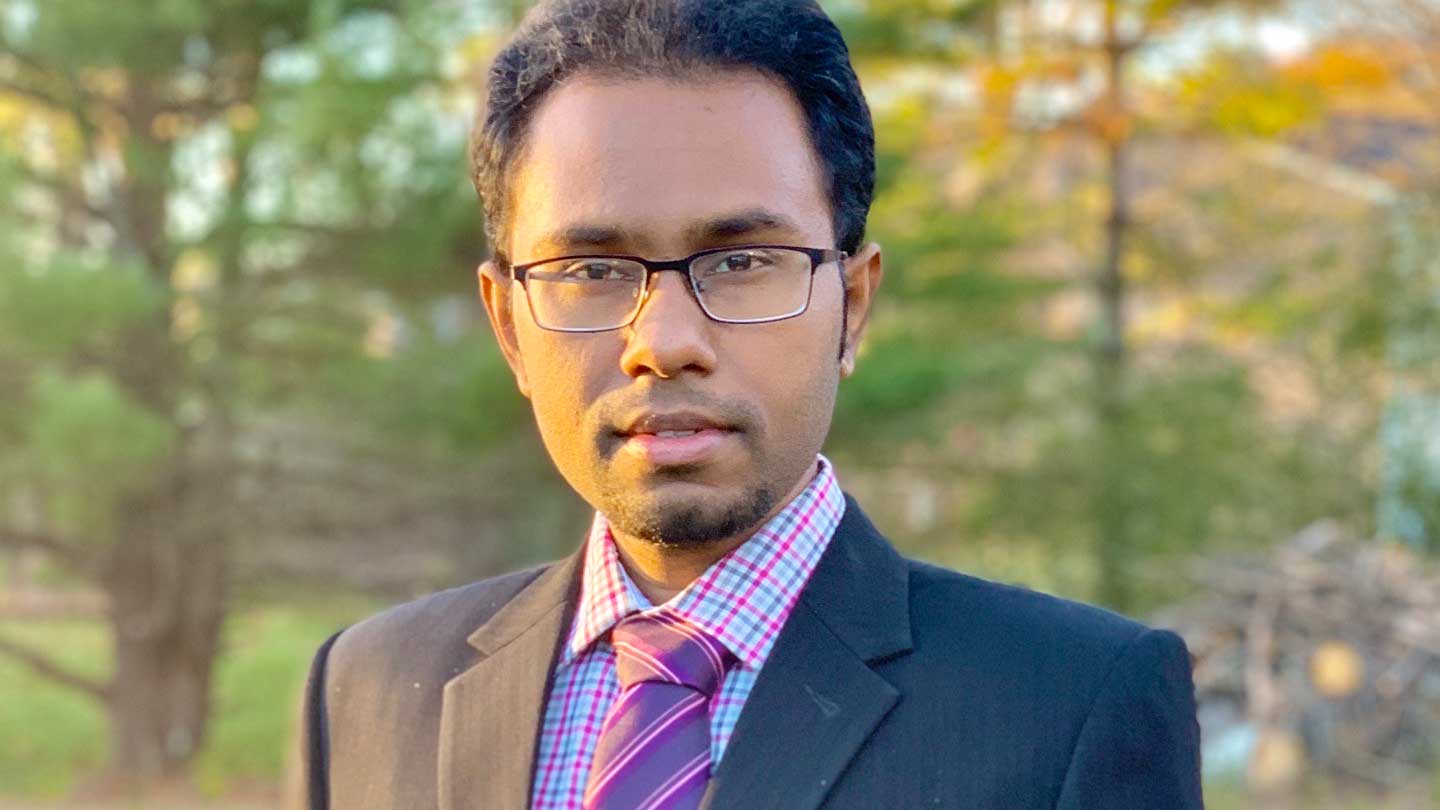 Maher Mansur has been selected by the Embassy of France in the United States for a Chateaubriand Fellowship in Science, Technology, Engineering, Mathematics & Biology- Health.

A University of Alabama in Huntsville (UAH) doctoral student in biotechnology will travel to France under a Chateaubriand Fellowship in Science, Technology, Engineering, Mathematics & Biology-Health to help research a possible biological early warning system for hazardous chemicals.

Maher Mansur, who is from Chittagong, Bangladesh, has been selected by the Embassy of France in the United States for the fellowship. He is pursuing his doctorate in the molecular biophysics laboratory of Dr. Jerome Baudry (pronounced Bō-dre) at UAH, a part of the University of Alabama System.

Advised by Dr. Baudry, who is the Mrs. Pei-Ling Chan Chair in the Department of Biological Sciences, Mansur is also supported by the Chan Foundation. He will work for six months at Paris-Saclay University at its University of Paris-Saclay/Evry-val-d’Essonne (UEVE) campus in Paris, one of three campuses of the university.

The fellowship will provide a monthly allowance, a round-trip ticket to France and support for health insurance abroad. In France, Mansur’s research focus will be on the cytochrome P450 enzyme group, through which most environmental, industrial and agriculturally based chemicals and drugs that enter the cells of living organisms are transformed into metabolites.

The project is a collaboration between Dr. Marie-Pierre Gaigeot of UEVE and Dr. Baudry to try to predict which chemicals in the environment could be turned into toxins by the human body. UAH and EUVE have had an agreement in place for several years under which the two collaborate on projects and exchange students.

"Often, what is needed to curate a great project into a successful reality is a dedicated researcher that can make the link between both labs, and Maher is that very person," Dr. Baudry says.

Sometimes the new metabolites created by P450 enzymes can become toxic to humans and other organisms, Mansur says.

"By using computational tools, I will build models of P450s of interest," he says. "Then I will study how the enzymes move in the cells and get different conformations of the proteins."

The significant conformations of the proteins will be used to identify the specific chemicals that have the potential to bind to the P450s.

"In short, this project will provide an early warning about hazardous chemicals," Mansur says. "Dr. Gaigeot's lab has expertise in a type of modeling approach known as coarse-grain modeling and computational molecular dynamics technique. During my stay in France, I would like to learn them from her lab and implement them in my research."

The Chateaubriand Fellowship supports outstanding doctoral students from American universities who wish to conduct research in France for a period ranging from four to nine months. Mansur learned about the fellowship from Dr. Baudry.

"He is a native of France, so he knows about the fellowship," Mansur says. "As a requirement for the application, I had to find an advisor who would agree to co-supervise a part of my thesis. It is my great honor that Dr. Marie-Pierre Gaigeot of the UEVE has allowed me to work in her research lab."

Paris-Saclay University is ranked 14th in the world, third in Europe after Cambridge and Oxford, and first in France.

"And Paris-Saclay decided to flag our proposal as a supported priority on their side," Dr. Baudry says. "I am sure it gave it a lot of visibility."

Chateaubriand fellows are selected via a merit-based competition through a collaborative process involving expert evaluators in both countries. The grant aims to initiate or reinforce collaborations, partnerships or joint projects between French and American research teams and is offered by the Embassy of France Office for Science & Technology.

"That Maher was selected speaks volume about his skills as a person," says Dr. Baudry.

"This fellowship is one of the international fellowships that some developed countries use to identify future world leaders around the globe, and to give them an appreciation for their host countries," he says. "It is an investment for the host country, in this case for France, but it builds an early strategic link with the top 20-ish US students every year that will bear fruits as they grow on their careers."

"I would love every current and prospective student at UAH to know that, indeed, UAH is a university that does offer to its students such opportunities, and not only in our traditional very strong areas," he says. "We are playing in the league of the top U.S. campuses, and our students are selected by colleagues in the world’s top 20 universities."

"In the lab, we exploit the knowledge of three-dimensional structures of proteins and blend different aspects of computational biology, computational chemistry and biophysics to solve the most critical problems of the modern world," Mansur says.

"Besides the research I intend to do for the Chateaubriand fellowship, I have been involved in other projects concentrating on human developmental proteins and viral proteins, and how to computationally model those and discover drugs against the proteins," he says.

At UAH Maher is using sophisticated computer programs to calculate how proteins change their shape in cells, Dr. Baudry says.

"These proteins are responsible for many of the diseases that we are trying to find drugs against, and Maher’s work is to see if a drug candidate will do well against only one specific shape of the protein, which would not be so great, or against many other shapes of the protein, which would be much more desirable for a drug," he says. "Maher is an experienced microbiologist and chemist, and he brings his knowledge and experience to our computational molecular biophysics approach."

The support of the Chan Foundation was significant to Mansur attaining the fellowship, Dr. Baudry says.

"I am particularly happy to see this generous endowment leveraging our best students and allowing them to be competitive – and successful – for a fellowship that often goes to U.S. universities that are ranked in the top 20 nationwide," he says.

Mansur says that when he found out he had been selected, he was completely overwhelmed with joy.

"Now, I feel motivated that such a prestigious award is bestowed on me. I will try my best to meet the expectation," he says. "I firmly believe that the Chateaubriand Fellowship will be hugely beneficial for my future career. It will help me to learn about the French and European educational systems and establish possible collaborative works."