UAH-HudsonAlpha collaboration expands knowledge of how our cells work 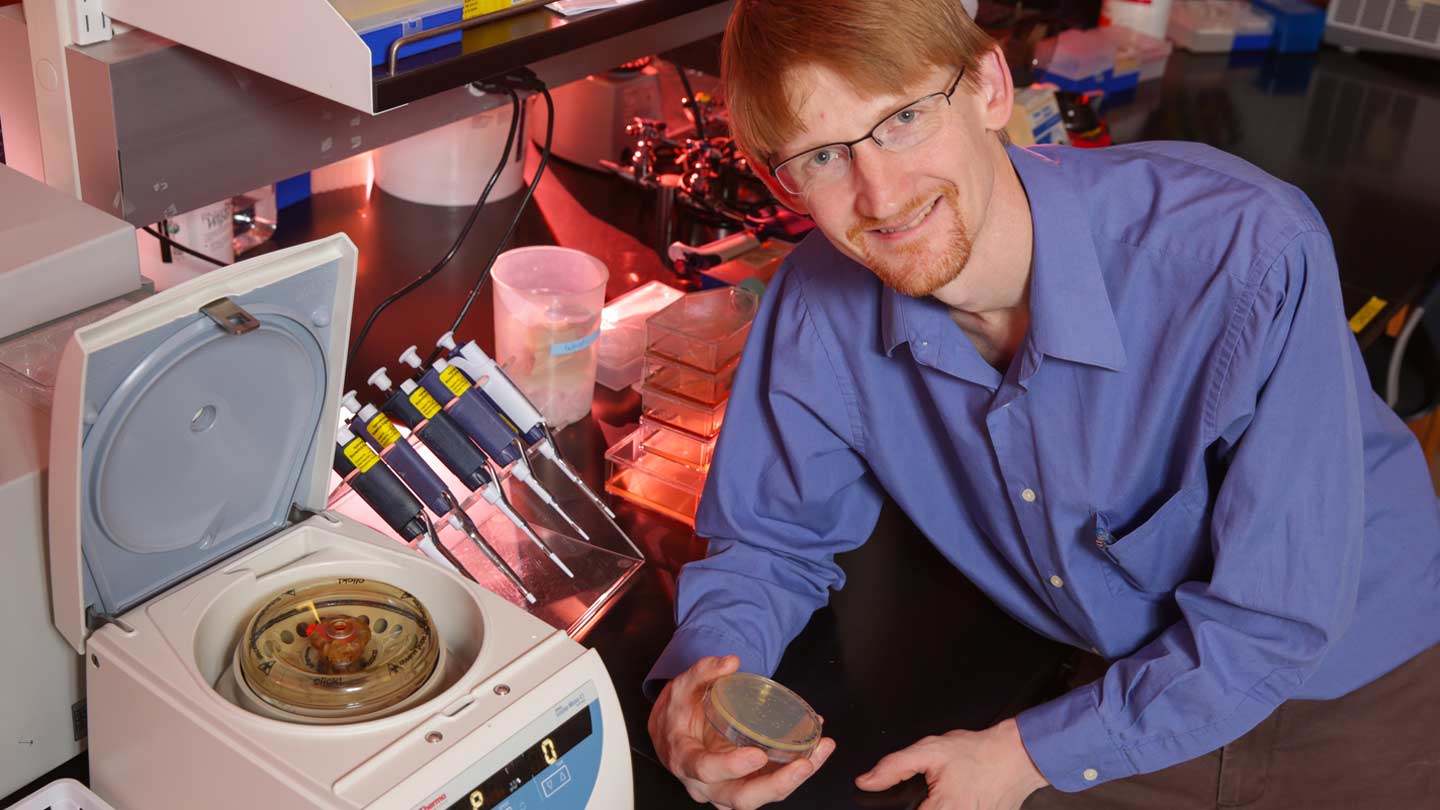 The labs of Dr. Eric Mendenhall and Dr. Richard Myers worked closely to study the function of 208 proteins responsible for orchestrating the regulation genes in the human genome.

In an effort to better understand how our cells work, scientists have studied the function of 208 proteins responsible for orchestrating the regulation genes in the human genome.

A paper appearing in the journal Nature describes the collaborative effort between The University of Alabama in Huntsville (UAH) and the HudsonAlpha Institute for Biotechnology.

The research was a close collaboration between the labs of Dr. Eric Mendenhall, a UAH assistant professor of biological science and an adjunct faculty member at HudsonAlpha, and Dr. Richard Myers, president, science director and a faculty investigator at HudsonAlpha.

“We know it is critical that genes be turned on and off in different cell and tissue types, but we didn't have a good idea of how that was controlled,” says Dr. Mendenhall. “Ours and many other groups have been working for years to find what regions of the human genome controlled this turning on and off – what we call enhancers and promoters.

“We wanted to determine what proteins control this turning on and off. These are called transcription factors, and where this paper comes in, our group looked at where 208 of them function,” Dr. Mendenhall says. “It was a large number and we helped to add a significant amount of information to how genes are turned on and off.”

The new discoveries come as part of the $31.5 million National Institutes of Health (NIH) Encyclopedia of DNA Elements (ENCODE) Project to further the construction of a comprehensive list of functional elements in the human genome. A scientific offspring of the Human Genome Project, the ENCODE Project launched in 2003 and is a scientific consortium that is tasked with creating and sharing genomics resources that are used by many scientists to study human health and disease.

Transcription factors can make a cell into a heart cell, a liver cell or even a cancer cell. Their location along the DNA strand, or genome, is critical to what role a cell will play during its lifetime. The genome in each of our cells is identical. It’s the transcription factors that act the switches to turn on or off genetic functions and differentiate the capabilities of one cell from another.

“We have close to 20,000 genes in our genome, and about 1,800 of these belong to a class called transcription factors, which is pretty large portion of our genes,” says Dr. Mendenhall. “These genes code for proteins that work in our nucleus to turn genes on or off by binding to the DNA. Once they bind to the DNA, which is tightly controlled by many chemical and biological mechanisms we don't yet fully understand, they find a nearby target gene to usually turn on, but occasionally turn off.”

It’s important to have a complete catalog to get a full picture of how genes are controlled, Dr. Mendenhall says. That’s a key part of how we develop from embryos and it’s important how our cells work to do their jobs and keep us healthy.

Teams led by Dr. Myers and Dr. Mendenhall employed the latest rapid genetic sequencing techniques, running dozens of parallel experiments at one time to quickly locate and flag transcription factors in a lab-grown line of liver cancer cells called HepG2 that are used for research purposes.

“The ENCODE consortium has long relied on easy to grow and study cell lines derived from tumor samples decades ago, with the idea we can extend the knowledge gained to understand all cell types of our body,” Dr. Mendenhall says.

Advances in a new technology called CRISPR-Cas9 have hastened progress by allowing scientists us to test almost any transcription factor.

“That removed a big bottleneck in the process and we expect to finish hundreds more in the next few years,” he says.

Key to the research is a procedure developed in 2015 by Dr. Myers and Dr. Mendenhall at HudsonAlpha called CETCh-seq. Scientists first use the CRISPR/Cas9 genetic editing technique to design a reagent to modify a genome in the liver cancer cells. Once they are flagged, in the second part of the CETCh-seq method a protocol called ChIP-seq tells them where the transcription proteins are located.

“The paper is describing analysis after we implemented this into a high throughput pipeline around 2016, and started generating data on lot of transcription factors compared to earlier efforts,” Dr. Mendenhall says. “In 2017 we had these 208 datasets and we simply asked what we could learn from all this data. It took a lot of dead ends, but we also found a lot of new questions to pursue we couldn't have predicted.”

The study presents genome-wide maps of transcription factors, cofactors and chromatin regulators at an unmatched scale within a single cell type, says Dr. Surya Chhetri, who was a UAH doctoral student when he was the project’s lead computational biologist and analyst. That’s a critical step to understanding the highly complex process of targeted gene regulation.

“To that end, we uncovered multiple novel insights into gene regulatory principles – including the novel DNA sequence motifs and novel protein complexes– the one that strongly intrigues me is dozens or even hundreds of proteins associate, called HOT regions. We manifest in this study as a majority of HOT regions function with a few strong and specific TF-DNA interactions and non-specific recruitment of other factors,” says Dr. Chhetri, who received his doctorate from UAH in biotech science and engineering in 2019.

“This leads us to propose a model in which HOT regions are nucleated by the anchoring DNA motifs and their transcription factors — an outcome not possible by few genomic experiments only,” he says.

Dr. Chhetri currently is engaged in understanding of the mechanisms and impact of functional genetic variants on disease and gene regulation as a post-doctoral scholar at Johns Hopkins University