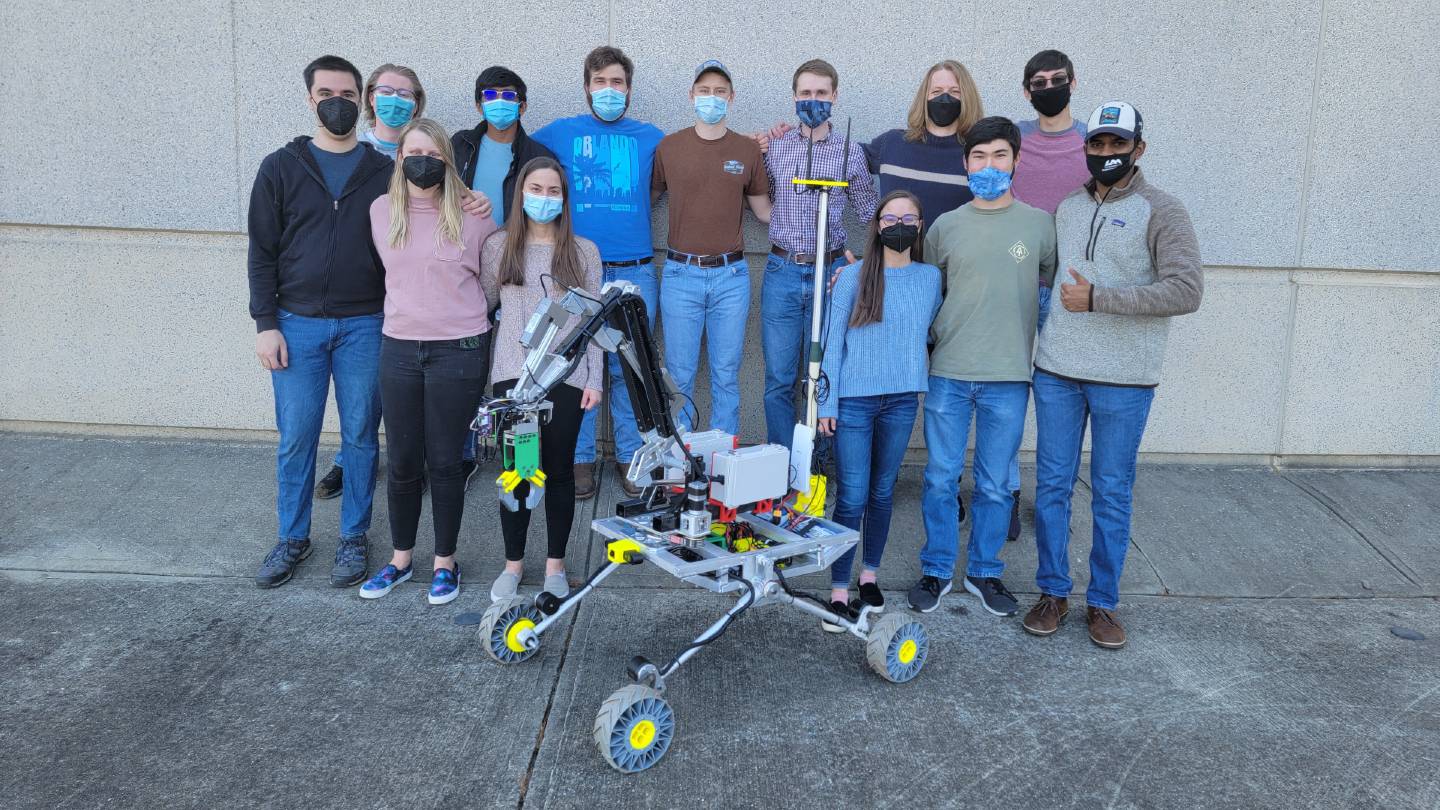 The Adaptable Service Transport Research Apparatus (ASTRA) team recently earned a perfect score in the science category for its URC System Acceptance Review to advance to Utah. “This is one of the most impressive SAR submissions by a novice team I have ever seen,” a reviewer wrote. “Kudos to you all.’

Outfitted with a very dexterous main arm, ASTRA is equipped with cameras, a microscope, a spectrometer and the hardware and chemicals needed to conduct tests to detect life.

Under URC rules, the rover has to fit inside a cube-shaped space that is 1.2 meters on all sides, or almost 4 feet. Once deployed, the rover can get bigger.

“Our rover has a footprint that is 1.19 x 0.9 meters and is 1.19 meters tall when stowed,” says team lead Shelby Tull, a senior in aerospace engineering from Nashville, Tenn., who founded the project. “It gets taller when we deploy its antenna. At its heaviest, the rover weighs 46.9 kg, or 103.4 pounds.”

“One of those missions is life detection. More specifically, it has to look at rocks and soil and tell whether there is extant life, extinct life or no life,” she says. “The other missions are extreme retrieval and delivery involving picking up heavy objects and carrying them across difficult terrain, equipment servicing involving dexterous tasks like using a keyboard, and autonomous navigation.”

Using a vacuum and cyclonic separator, the rover can pick up either Earthly dirt or Martian regolith and perform a bicinchoninic acid (BCA) test by adding a mixture of copper sulfate and BCA to the sample. If the chemicals turn purple, that indicates protein, which can only exist if there is extant life.

“We use our onboard spectrometer to look for pigments that are also only found with life, such as chlorophyll and carotenoids,” Tull says.

For rock samples, the rover has a rudimentary arm with a camera and a microscope to take a closer look at samples.

“On rocks, we are really looking for endoliths and hypoliths – those are colonies of organisms that grow on, inside and underneath the rock,” Tull says. “We might see streaks of green or gray, which indicate plant or bacterial life.”

For extinct life, the rover’s cameras allow the team to search out two types of fossils: cast fossils and trace fossils.

“Cast fossils are what you usually think of when you think about a fossil, the actual shape of the organism petrified into rock,” Tull says. “Trace fossils are other things that organisms leave behind, such as footprints or nests.”

The main arm is remarkably precise in operation, and that’s the result of a lot of design work upfront, says electrical lead Thomas Bennett, a graduate student in aerospace systems from Charleston, S.C.

“Getting it to be so dexterous didn't really take much fine tuning at all, it was basically that good from when we first turned it all on!” Bennett says. “That's not to say we just got lucky though. We really did our homework when designing it. We selected components and designed it from the beginning to have the best balance of strength and dexterity.”

Weight is always a consideration in long-distance spaceflight and so the arm went through several design revisions to implement the same mechanical structure using lighter and lighter components, Bennett says.  “As for the software that controls it, I have to thank UAH's Dr. Farbod Fahimi,” he says. Dr. Fahimi is an associate professor of mechanical and aerospace engineering.

“Taking his MAE 664 class taught me everything I needed to know,” Bennett says. “I even used one of my old assignments as a basis for the control software."

Tull says that for her, the most challenging part of developing the device was designing the biosensor module used to detect life.

“We have no biology or chemistry majors on the team at this time, so we had to do a lot of homework to get it right. It was very difficult to sort through scholarly research without being familiar with all the vocabulary used in biochemistry!” she says.

“We were also in uncharted territory when designing the spectrometer, which involved a lot of research in optics. Thomas actually wrote an optical simulation program in MATLAB, which simulated the path that rays of light follow in our spectrometer. He got it right to within 60 microns!”

Other team members think the arm’s design and fabrication were the most challenging parts, she says. Most mechanical components were fabricated in the UAH Research Machine Shop under the guidance of Jon Buckley, prototype development specialist. Final assembly and all electronics work was done in the Space Hardware Club's lab in UAH’s Optics Building.

“It was pretty challenging finding enough room to work, but I'd say we've managed it pretty nicely,” Tull says. “Space Hardware Club's cage in the shop is full, and we have to share lab space with other Space Hardware Club projects, but working under difficult constraints is what engineers do.”

The design and refinement process hasn’t stopped as the team advances through the layers of URC review needed first before ASTRA can actually perform on the desert sand. Testing has revealed opportunities for improvement in the suspension, wheels and drivetrain.

“We're hoping to end up with a suspension structure that's trapezoidal instead of the triangle we have now, with larger wheels and more of a speed reduction between our motors and wheels,” Tull says.

The team is also working to enclose exposed electronics, fine tune the camera placement and smooth operation through upgraded software.

“Our current biosensor is also only a prototype, and we're going to be going back and remaking that from scratch in order to make it much more refined,” she says. “Lastly, we also need to finish our autonomous navigation system by adding obstacle avoidance.”

The 21-member ASTRA team is large, Tull says, but other URC teams have as many as 90 members.

“We are actually on the smaller side for a URC team,” she says. “I founded this project in February, 2020, with about five or six other people, so we have definitely grown.”

When she founded ASTRA, Tull had a completely different goal in mind.

“At the time, I was obsessed with the prospect of interstellar exploration and specifically studying exoplanets,” she says. “In the future, space probes will have to autonomously identify their own science targets, simply because they are too far away for researchers at Earth to make decisions in real time.”

“However, just a couple weeks after I got some friends together for my idea, we discovered the University Rover Challenge, which combined several of my interests with several of theirs.”

While the experience has taught her a lot, from technical information and design work to project management, Tull says the most important lesson is the value of surrounding herself with people who know a lot more than she does about their own unique fields.

“There's an old adage, ‘If you're the smartest person in the room, you're in the wrong room,’ which I have found to be very true through this project,” she says. “I have learned so much over the course of two years, but it all boils down to the amazing peers who I have worked with along the way.”