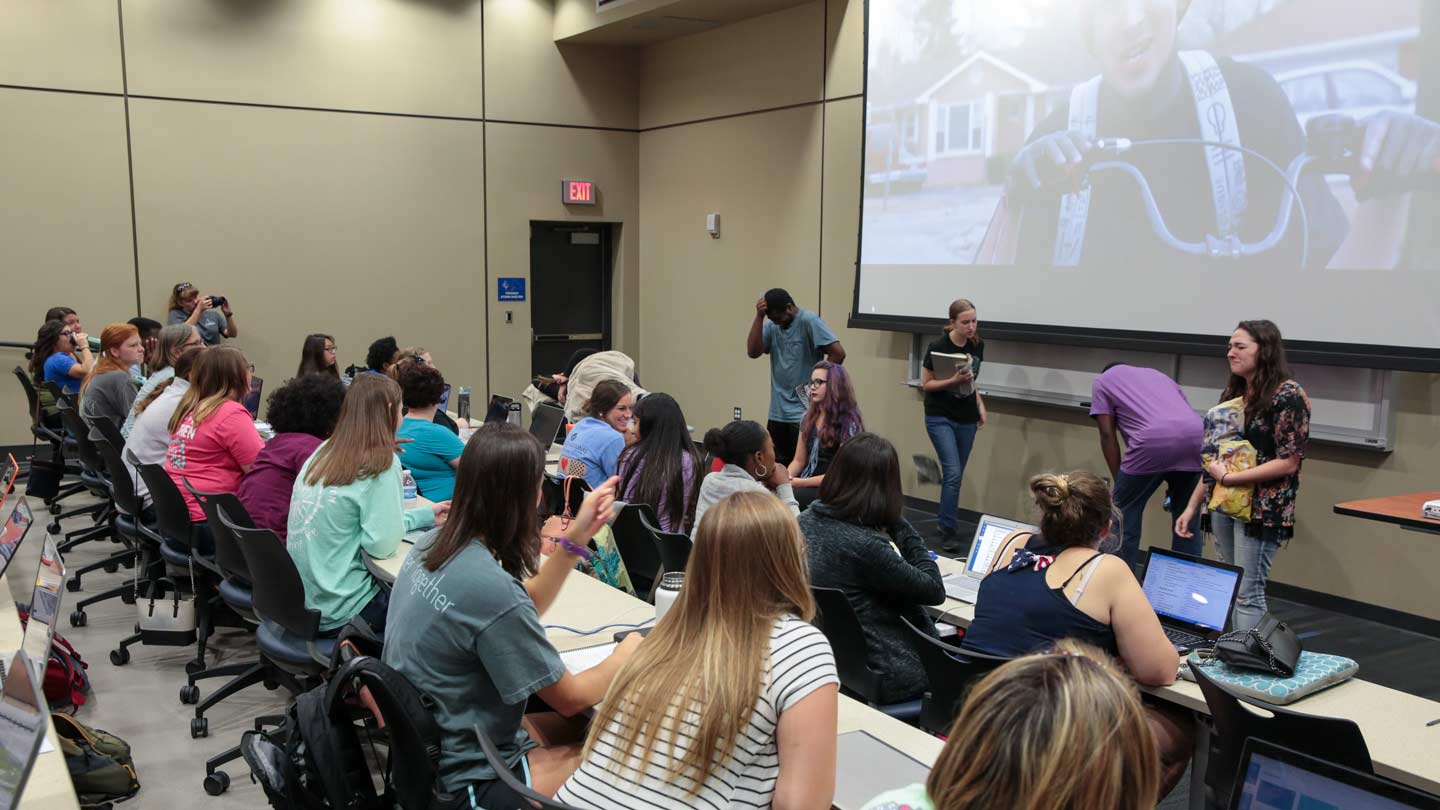 To help reinforce what a class of aspiring nurses is learning about mental health, a cadre of theatre students perform a short piece on coping with stress set to twenty one pilot’s "Stressed Out."

Dr. Maria Steele knows a little something about being in a stressful situation. The clinical assistant professor of nursing at UAH had just started a new job at a hospital on Mississippi’s Gulf Coast when Hurricane Katrina hit. “It was just chaos,” she says. So to blow off steam, she began exercising regularly, joining a boot camp and losing weight. “It was an emotion-based coping mechanism, and it made me feel so much better.”

In the decade or so since then, Dr. Steele has rebuilt her life in Northern Alabama. But she still draws on her Katrina-era experience to help teach the students in her course on psychiatric and mental health nursing. “I tell them not to forget to check in with their own mental health and to take advantage of university resources like the Counseling Center,” she says. “Oftentimes nurses don’t think about doing that, or they wait until it’s a problem, which can have chronic long-term pathological consequences like illness and disease.”

This semester, however, she decided to test out a new approach more in keeping with the College of Nursing’s emphasis on collaborative learning. “I was trying to come up with something related to stress and coping that would engage the students, and I thought about the song ‘Stressed Out’ by twenty one pilots,” she says. “So I called Karen [Baker] in the Theatre Program and asked if she’d be willing to have her students do a role-playing performance with the song’s video as a backdrop.”

Having already successfully worked together on a previous nursing-theatre collaboration, the two were happy to join forces once again. “Maria is such a joy to work with,” says Baker, a lecturer in the Communication Arts Department. “She is very organized, and she’s passionate about teaching the students. I wish we could work together more often!” Together with assistant professor of communication arts Amy Guerin, Baker enlisted six theatre students – Kaylie Miller, Bakari Prigg, Stella Broussard, Meg Bojarski, Chris Wilson, Lexi Mecikalski – and held two rehearsals to practice movements that would represent both maladaptive and adaptive coping behaviors in response to stress. 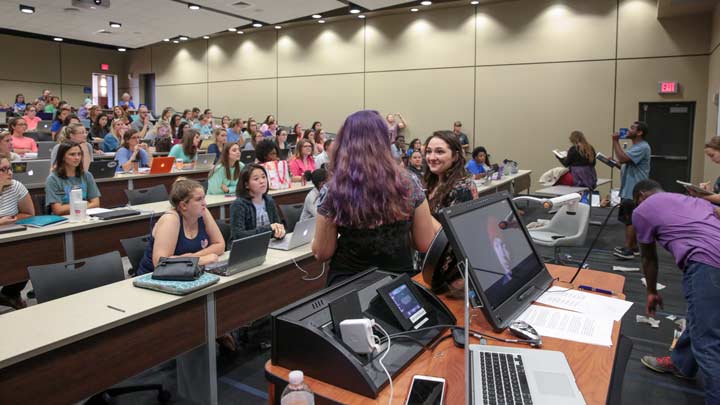 After demonstrating maladaptive coping behaviors in response to stress, the theatre students then transitioned to adaptive ones.

The day of the performance, the actors took their places at the front of the nursing class as the video began to play. “They started with the maladaptive behaviors, so for example one of the students was eating potato chips and crying, another one was trying to study but having trouble focusing, and another was pretending to drink heavily,” says Dr. Steele. “Then as the song went on, they transitioned to the adaptive behaviors. One began praying, another went to talk to a friend, and another started journaling.”

The performance’s conclusion was greeted with enthusiastic applause and followed by a discussion about how to assess stress and the types of interventions and coping behaviors that can be used to mitigate it. Dr. Steele then invited the nursing students to do some role-playing of their own, to reinforce what they had learned by watching their theatre counterparts. “We had some very good performers,” she says. “They demonstrated relaxation techniques like deep breathing, guided meditation, progressive muscle relaxation, and cognitive reframing.”

As a result, both the theatre and the nursing students were able to benefit from the collaboration. “They all took away something they could do to cope with stress, whether it’s talking to a friend or a spiritual counselor or taking a yoga class,” says Dr. Steele. And because the process was so engaging, both she and Baker believe they’re also more likely to remember those techniques in the future. “The Greeks believed theatre needed to teach and entertain,” says Baker, “so I'm always pleased when performance can reinforce learning.”