UAH surfs the swell of a powerful additive manufacturing wave 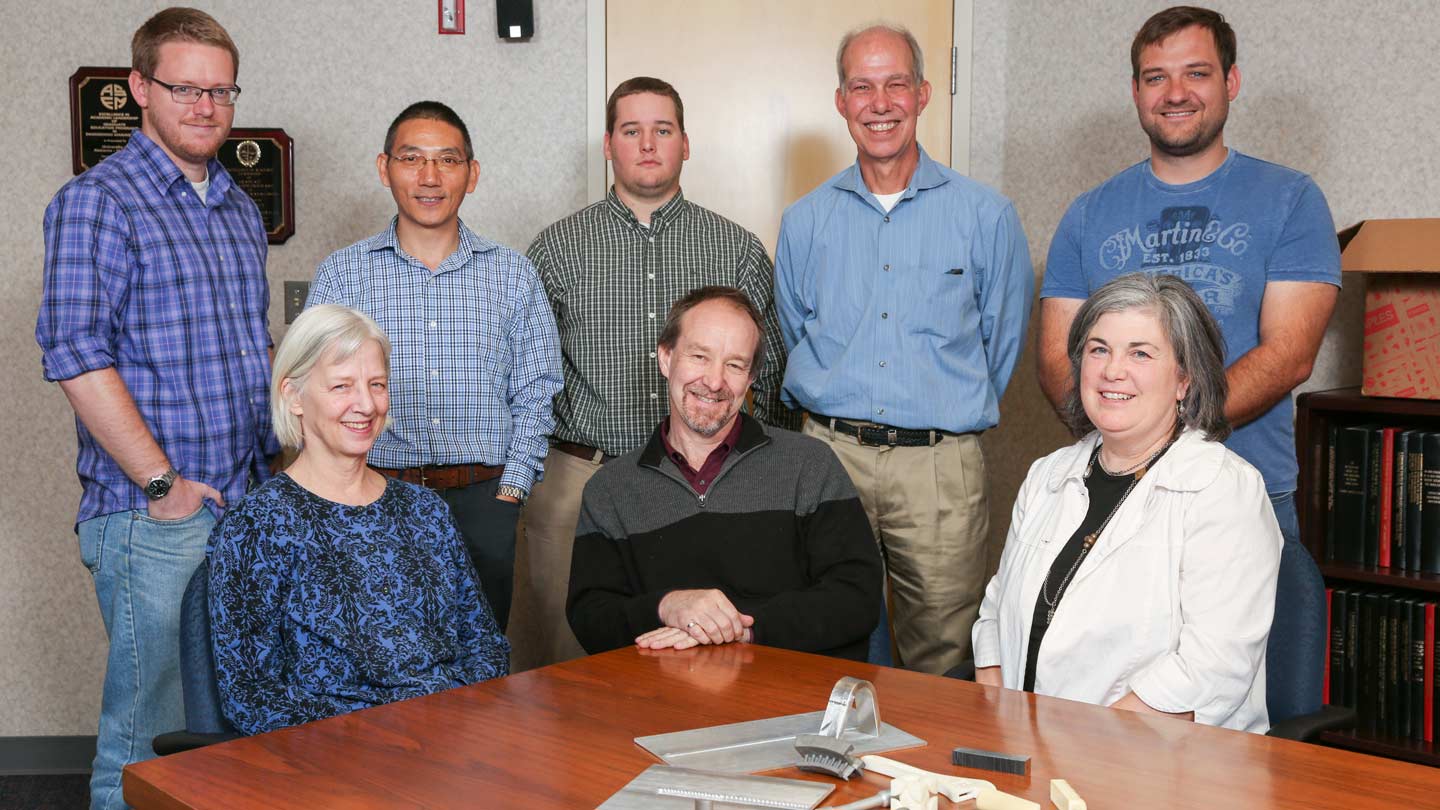 The many advantages of additive manufacturing, including cost control and precision, are pushing the adoption of the technique in plastics and metals in the automotive and manufacturing industry, as well as at NASA and in the U.S. military.

It's one thing to be able to print parts that were formerly cast and machined, but it's another to say that you have confidence in the reliability of those printed parts. To do that, you must have a high degree of confidence in the raw materials being used, in the formulas involved in their combination if more than one material is used, and in your understanding of the microstructures being formed in the finished product, as well as in the processes and systems used during manufacturing.

Scientists and engineers at The University of Alabama in Huntsville (UAH) are exploring all these areas in the rapidly evolving field.

"Now, it's all about using these processes to create new structures with unique properties in a greatly compressed timeframe, but the quality control people are saying, 'Wait a minute, will it last?'" according to Dr. Judith Schneider, a professor of mechanical engineering who works with manufacturers and the government to research the effect of temperature and strain on the microstructures of metals used in additive manufacturing printing.

That's something she says is crucial to ensuring that printed parts can be made with a high degree of predictability about their underlying microstructure and longevity.

Currently, additive manufacturing is following a two-track course similar to one Dr. Schneider says she experienced when NASA implemented the relatively new friction stir welding process in 1995. Because that process was superior, it began being used almost immediately while at the same time the fundamentals of what was occurring in the process were being studied. As that knowledge increased, so did confidence in the products of the process.

"With additive manufacturing, we are now in the process of establishing the guidelines and the practices to increase our confidence," she says. "We don't understand yet the cause and effect of the variables of the materials and the manufacturing processes. We're just in the infancy of knowing what the flaws are, and as we get new and different materials, there are going to be additional problems to study." 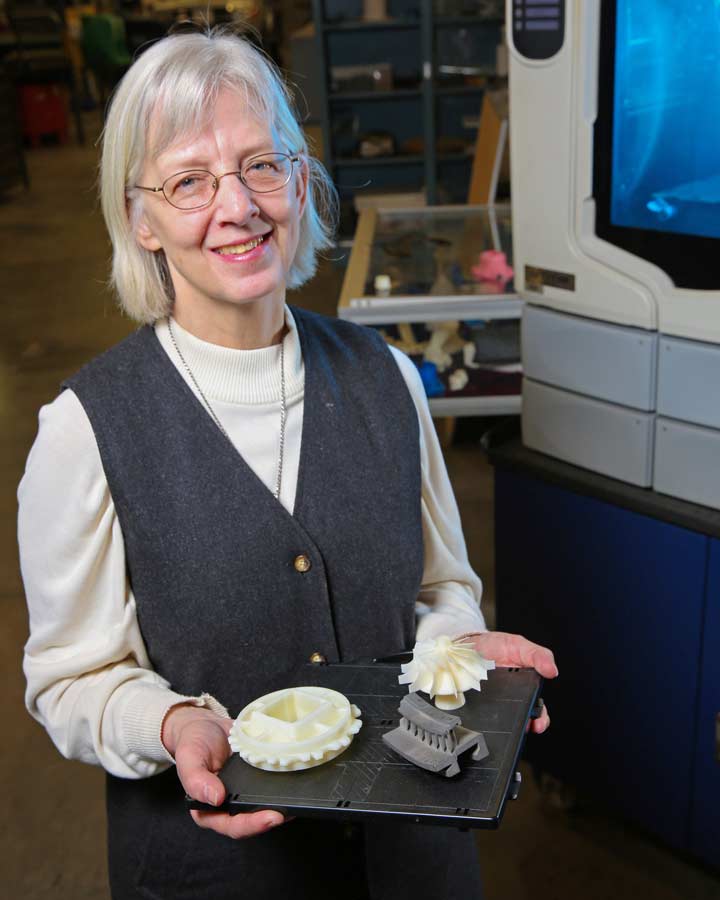 Dr. Judith Schneider’s additive manufacturing research involves ensuring that printed parts can be made with a high degree of predictability about their inner structure and longevity.

New applications ranging from printing spare parts for spacecraft in space to printing battlefield replacement parts for soldiers seem to be on the horizon, yet the promise of additive manufacturing is tempered by the field's infancy.

Cast and machined parts have the benefit of hundreds or even thousands of years of accumulated knowledge, providing a high degree of confidence in their performance. The additive manufacturing of metals is a completely different technology that results from metal being instantaneously cooled in a process that Dr. Schneider says is similar to "splat cooling." That rapid cooling creates much different microstructures in metal parts than in conventional cast or machined parts. The structures formed and strains placed in the microstructures of printed metals are not yet well understood.

Bimetallic printing - the ability to co-print disparate metals in a single part - is seen as one of the great potentials for additive manufacturing, and Dr. Schneider is exploring the nature of the microstructural bonds between various metals to unlock fundamental understanding of the interaction of these materials and how they best can be combined in the printing process to form a strong bond.

"We're not there yet, but that's the promise," she says of bimetallic printing. "That's the holy grail of additive manufacturing."

Dr. Phillip Farrington, professor of industrial and systems engineering, reaches out to defense, industry, private foundations and professors in other disciplines on the UAH campus in a quest to understand and perfect bimetallic additive manufacturing, a process that could save myriad machining steps if perfected.

"The primary question we are trying to address is, can we bond dissimilar materials together using additive manufacturing technologies," says Dr. Farrington. "There has been some limited success bonding copper and Inconel, so we hope to build on that earlier work to advance our research."

"Both NASA and the U.S. Army are interested in this type of application because they have systems that would benefit from the ability to create bi-metallic joints," he says.

A multidisciplinary UAH Additive Manufacturing Research Team has received a grant from the Presto Foundation to study the use of additive manufacturing technologies in the development of Dept. of Defense systems.

"When the opportunity to submit this proposal to the Presto Foundation came about, Dr. Messimer and I discussed other faculty who had the background to support the research, and as a result Dr. R. Michael Banish, an associate professor from the Department of Chemical and Materials Engineering, and Dr. Qiuhai "Ken" Zuo, an associate professor from the Department of Mechanical and Aerospace Engineering, joined the team," says Dr. Farrington.

That alliance has allowed the UAH team to expand and augment its base study.

There could be wide-ranging impacts. Additive manufacturing processes are a key research focus of the Southern Alliance for Advanced Vehicle (SAAV) Manufacturing Center, which promotes greater research and development ties between vehicle manufacturers and its academic partners. SAAV began in 2014 a partnership between UAH, Auburn University and Tennessee Technological University and was funded by a National Science Foundation grant.

"We have potential member organizations interested in joining the center who are interested in this research," Dr. Farrington says.

"What I'm looking at is how the additive manufacturing process fits the bigger picture, as far as making rockets and jet engines and more complicated systems like that," says Dr. Collopy, who formerly worked for the National Science Foundation as director for the Engineering Systems Design and Systems Science programs.

"The fastest growing modern firms, like Google, Cisco and Twitter, all have a core competence of developing systems out of software," he says.

"In software development, you can try daring things, and if they don't work, you say, 'Well, I lost a day.' The neat thing about additive manufacturing is, you can experiment on a similar cycle: think up a daring design, push a button and you get your part out so you can test it."

Additive manufacturing has the ability to take months and even years off the time between design and physical part testing, and Dr. Collopy says that is liberating for engineers working with complex cutting-edge technologies.

Build and break testing is immediately rewarding, he says.

"We love the idea of testing in software simulation, but every real engineer who is working with a complex system or a complicated problem, they want to get hardware and break it," says Dr. Collopy. "Then you really know the design's abilities, its durability and its capabilities." 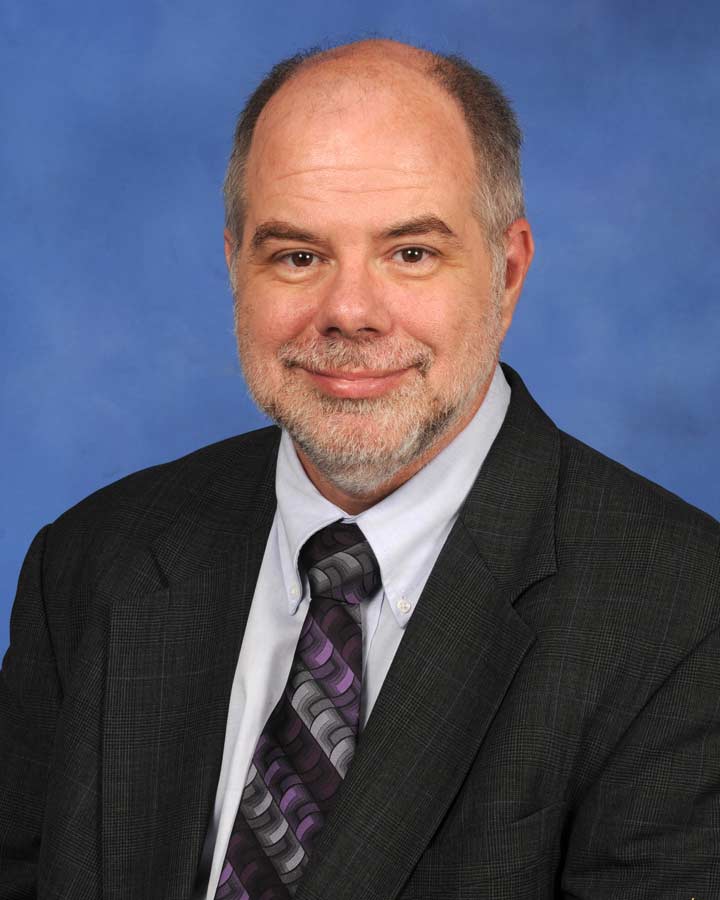 "When you are engineering technically challenging hardware, you really want to get to hardware fast," Dr. Collopy says, and that's where the materials, structural and process knowledge all come together in a systems engineering approach. "However, building things fast really doesn't work if what you build is not quality, and that is the current research frontier in additive manufacturing."

"What you design is shaped by your manufacturing processes," says Dr. Collopy. "Additive manufacturing is a completely different process that allows you to do things you couldn't do before."

He points to work by Jonathan E. Jones with NASA's NanoLaunch effort at MSFC, which is using additive manufacturing to create scaled test vehicles that have the potential to propel programs across the "valley of death" between laboratory demonstrations and actual in-flight environments.

"He's trying to explore a completely different way of making rockets," Dr. Collopy says. "He doesn't have to wait around on a lengthy procurement process. He can go right down to the NASA Marshall Space Flight Center 3-D printing shop and print what he needs in an afternoon. If you go over to NASA to look at what they've got, they've got a room full of 3-D printing machines on a large scale."

And in a new twist at UAH's Manned/Unmanned Collaborative Systems Integration Laboratory in Olin B. King Technology Hall - a collaboration with the U.S. Army's Research, Development and Engineering Command (RDECOM) at the U.S. Army Research Laboratory - students working with autonomous systems in a gaming environment now have access to a 3-D printer, as well.

"This takes it out of the software-only design and testing setting into a new area," Dr. Collopy says. "Our vision is that a student designs an autonomous tracked vehicle in simulation using the software and then can 3-D print the structure for it right there. We then add the electronics, motors and other hardware to that to get a working model. It adds a new dimension to what they are doing."

Additive manufacturing is experiencing exponential growth that is in its own way additive, Dr. Collopy says, though he notes that the human mind favors identifying linear growth but has difficulty perceiving the exponential kind. Exponential growth builds on prior pillars of knowledge and experience, so that initially the curve may look flat but then it takes a sudden upward turn that is very similar to the shape of an ocean wave. UAH is riding that swell.

Some projections show that a matured additive manufacturing field may still only account for 2 percent of all parts made, Dr. Collopy says, but if most of those parts are made to telescope development times, that will free engineers to cheaply test a myriad of approaches to any one problem rather than singling out only a few possible solutions due to time and cost constraints.

"For testing purposes, it's going to change how we make complex systems."