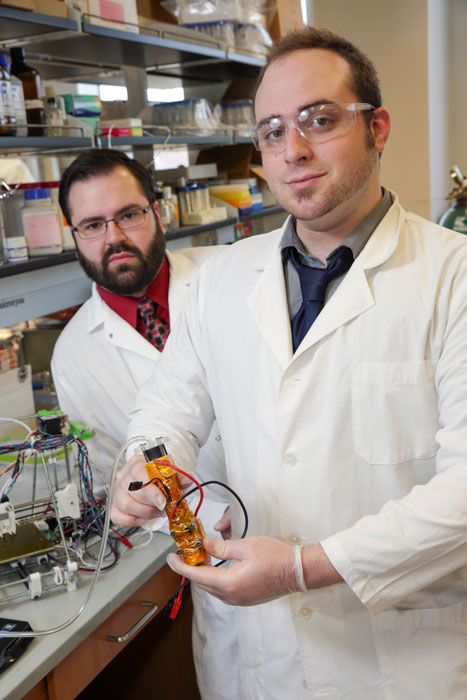 HUNTSVILLE, Ala. (April 10, 2014) - Nestegg Bio, a 3D printing start-up founded by University of Alabama in Huntsville (UAH) student Tanner Carden and collaborators Devon Bane, Gavon Carden, and Tim Gualdin, has been selected to participate in the GIGTANK Accelerator program by The Company Lab (Co.Lab) in Chattanooga, Tenn.

Normally a UAH mechanical and aerospace engineering undergraduate student, Bane is taking the semester off to catch up with commercial projects.

The company's proprietary extruder named CarmAl uses software to control a solenoid valve that regulates the timing of nitrogen pushing on a sugar solution in the extruder to produce a sugar grid that mimics blood vessels. After cells held in suspension in an agarose solution are grown around the vascular structure, a solvent can be used to wash the sugar away. The result is a cell mass that contains vessels like a human organ would. The extruder's design is open source and available under Creative Commons License for non-profit use at Nesteggbio.com.

As part of its investment, business incubator Co.Lab would accelerate the NestEgg Bio startup at Chattanooga's Gigtank startup accelerator this summer. The Gigtank experience will in turn attract further investors, Carden says.

Nestegg Bio was founded in Huntsville and Carden intends to keep it that way. As part of the agreement, Nestegg will not have to relocate to Chattanooga permanently. Nestegg will incorporate this summer and is in talks with the Hudson Alpha Institute for Biotechnology to secure a place on its campus.

"The investment from the Co.Lab is in exchange for a small percentage of equity," Carden says. "We went up to Chattanooga to see the Co.Lab and the surrounding facility, and we were very excited. I really like the community they have synthesized up there."

There will be a pool of investors from the Tennessee Valley region at the end of Gigtank. We are also considering a second round of fundraising later this year. We are open to investment, but we want to make sure any potential investors share our vision.

Co.Lab's investment will be used as operating capital and also to cover the Chattanooga living expenses for three people over the duration of the summer.

"There will be a pool of investors from the Tennessee Valley region at the end of Gigtank," Carden says. "We are also considering a second round of fundraising later this year. We are open to investment, but we want to make sure any potential investors share our vision."

The connection between Co.Lab and NestEgg Bio emerged from an event organized two months ago at Zero Point Frontiers Corp. in Huntsville by Rocket Hatch, an open community of creators and entrepreneurs with the mission of supporting startup creation in the Huntsville Metro and surrounding areas. The meeting included a diverse group of people interested in 3D printing in North Alabama and Co.Lab staff.

"NestEgg Bio is a prime example of the innovation potential within our local startup community. We will continue to grow and connect our startups and entrepreneurs to the global startup ecosystem and bring the best resources available to our region," says Antonio Montoya, Rocket Hatch founder.

"We are still in the preliminary development stage," Carden says of the fledgling company. "We are building a new custom printer and plan to develop more with it over the summer. Our future is full of challenges, presentations and upcoming competitions. I will be speaking at UAH Nursing's Colloquium 'Connecting Technology Capabilities and Healthcare Possibilities' on April 14."

Carden also says the team is currently competing in The Boeing Company's New Business Plan Challenge. "We intend to win that."