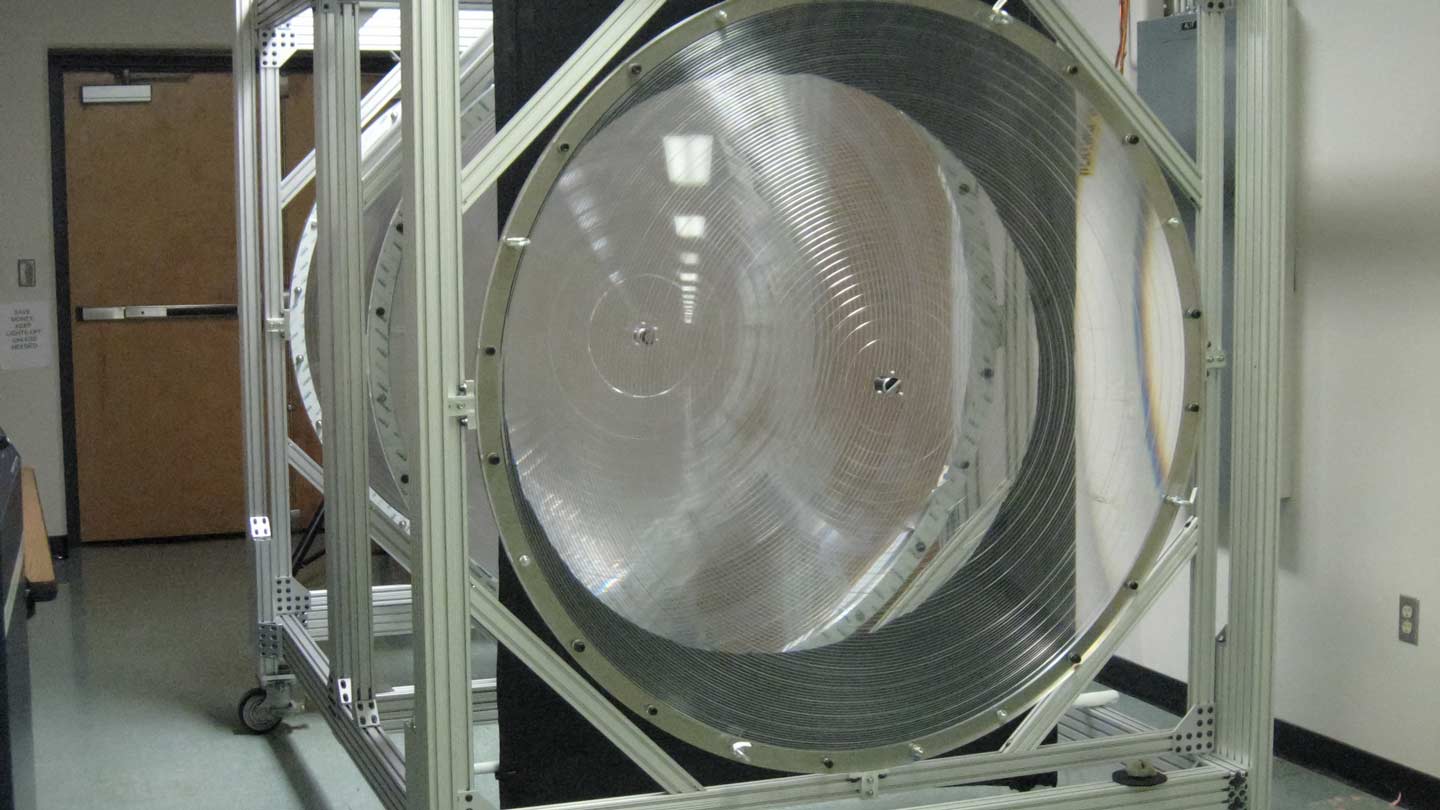 UAH is part of a NASA-funded team of researchers supporting the EUSO-SPB2, which is planned for launch in 2022. Here, a 1.5-meter-diameter subscale prototype optic, produced in Japan by Riken, is being tested at UAH’s Center for Applied Optics. This design approach uses Fresnel lenses, similar to the ones used in lighthouses, to pack a lot of optical power into a lightweight system.

A team of researchers at The University of Alabama in Huntsville (UAH) has been awarded NASA funding as part of a large, five-year-long U.S. collaboration to fly an ultra-long duration balloon mission with three innovative ultra-sensitive telescopes to sense cosmic rays and neutrinos coming from deep space. Planned for launch in 2022, the second-generation Extreme Universe Space Observatory on a Super Pressure Balloon (EUSO-SPB2) is a major step toward a planned mission to send a probe to space.

"UAH has been involved with this research for over 20 years, with the science initially led here by the late physics professor Yoshi Takahashi," says Dr. Patrick Reardon, who serves as the director of UAH’s Center for Applied Optics (CAO) and as the principal investigator for the UAH effort. "Since then, a team from the CAO, including optical designer Ken Pitalo and several students, has been creating and testing some extraordinary optical designs."

The science driving this investigation is a search for the source of ultra-high energy particles from space that hit our Earth. One type of these particles is cosmic rays: sub-atomic nuclei traveling from every direction in space, accelerated by supernovas and other unknown cosmic phenomena. Similarly mysterious are neutrinos, the "ghost particles" that pass through us all the time, mostly undetected. 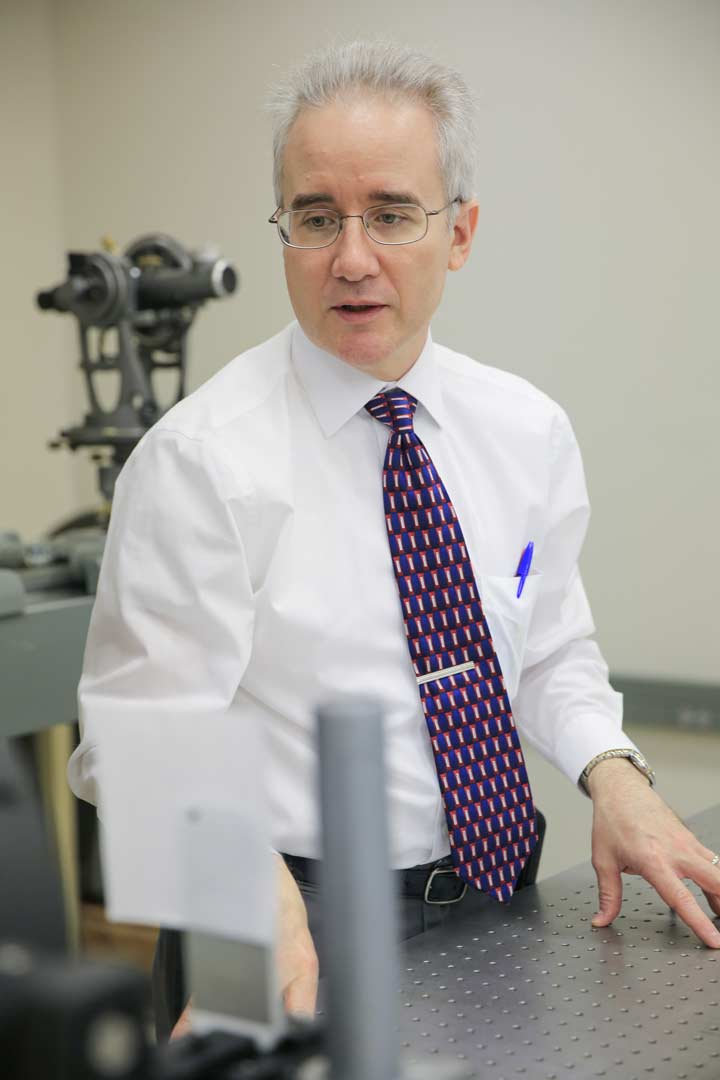 While there is much we don’t know about neutrinos, the most pressing concern is where they come from. All that is known is that, based on studies at the Pierre Auger Observatory in Argentina, the most energetic cosmic rays that hit the Earth are coming from beyond our own galaxy. The most extreme cosmic rays and neutrinos offer the most clues to their origins and travels because they can resist the effects of magnetic fields in space that curve the paths of weaker particles. These are what this new NASA-funded balloon experiment will be hunting.

"This program will help us solve the great mystery of where in the universe these highly energetic particles are coming from, and how they could possibly be made," says Dr. Angela Olinto, the University of Chicago Albert A. Michelson Distinguished Service Professor in Astronomy and Astrophysics and principal investigator of the collaboration.

Because there are relatively few cosmic particles that collide with Earth, EUSO-SPB2 will not be sensing them directly. Instead, the balloon-borne experiment will be looking for the trails of ultraviolet and visible light (photons) that are generated in the particles’ wake as they fly through the Earth’s atmosphere. To increase the probability of getting data about the particles, it will be placed at an altitude of 100,000 feet, high enough to monitor a large volume of our atmosphere.

The challenge, however, is designing an optical system that takes into account both the limited number of photons being generated and the very high speed at which the images must be acquired. It must not only have far more light-gathering power than NASA’s James Webb Space Telescope (JWST), but it must also fit on and be lifted by a balloon.

According to Dr. Reardon, this is exactly the kind of project for which the CAO has the optical engineering expertise. "First we have to turn the science needs into practical optical specifications," he says. "Then we design the optics, ensuring that they can be successfully fabricated and assembled." In some cases, those optics are produced on-site at UAH. After that, he continues, "we develop the alignment and testing instruments and procedures, and even assist in the deployment of the system." These are the capabilities the CAO brings to every project.

In addition to designing and ensuring that the optics are correctly assembled, the CAO is working with Dr. James Adams and Dr. Evgeny Kuznetsov from UAH’s Center for Space Plasma and Aeronomic Research to support the power systems, detector development, and ground tests, all of which are critical to the success of the mission. 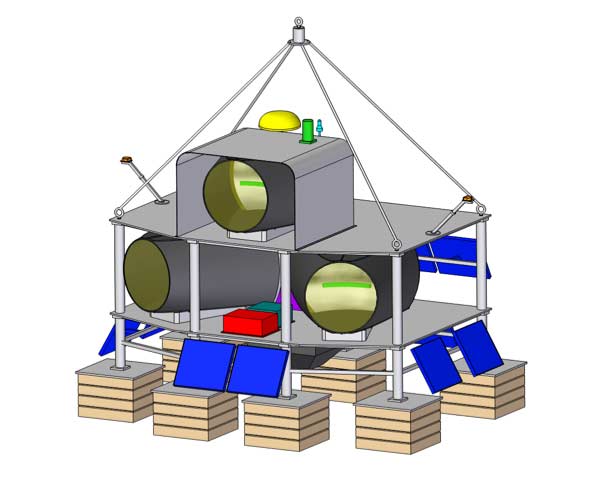 The original design concept for the innovative, ultra-sensitive, three-telescope observatory, which will pick up cosmic rays and neutrinos coming from deep space.

The football-field-sized balloon, which can travel for months at 20 miles into the atmosphere carrying the pioneering 30,000-pound observatory, will carry up to three of these telescopes – each one tuned to look for specific characteristics that help identify the cosmic particles. The mission will launch from New Zealand so that the balloon can catch a ride on the polar jet stream that circles the bottom part of the globe. The goal is for the balloon to make several trips around the Antarctic over the course of 100 or more days.

The flight will provide proof of concept for the planned Probe of Extreme Multi-Messenger Astrophysics (POEMMA), a pair of orbiting satellites with the same capabilities but with several orders of magnitude more sensitivity. UAH is part of a team of scientists and NASA engineers led by Dr. Olinto who are designing the POEMMA mission for consideration by the 2020 Astronomy and Astrophysics Survey, a scientific prioritization for the decade led by the National Academy of Sciences.

In addition to UAH, the NASA-funded team includes the University of Chicago, the Colorado School of Mines, the Lehman College, and Marshall Space Flight Center. Numerous international collaborators are also providing both hardware and analysis expertise.