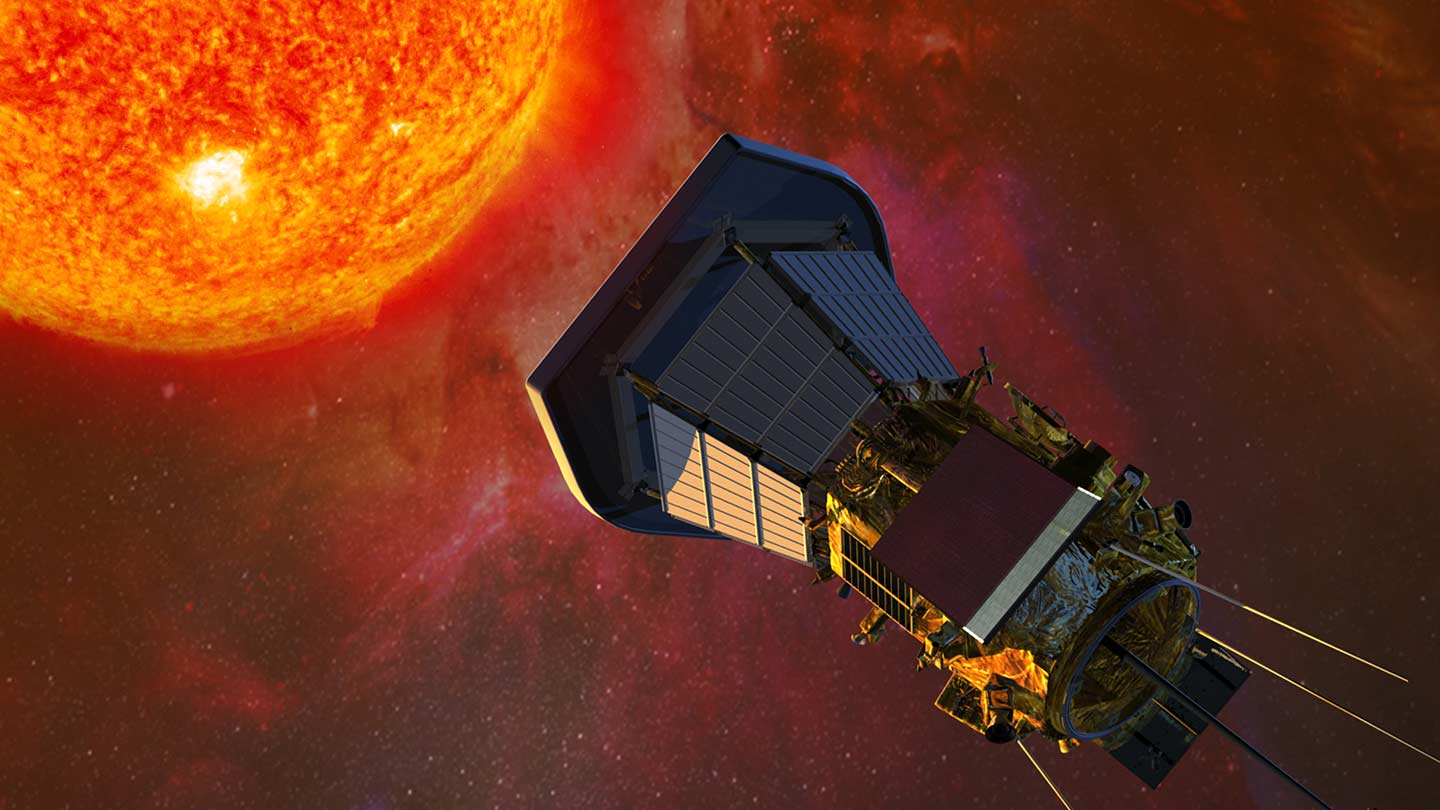 An artist’s rendering of the Parker Solar Probe approaching the sun.

The University of Alabama in Huntsville (UAH), Marshall Space Flight Center (MSFC) and the Harvard Smithsonian Astrophysical Observatory (SAO) have created and tested the only instrument that will sample the solar wind while exposed directly to it aboard NASA’s Parker Solar Probe (PSP), which will travel closer to the sun than spacecraft from Earth have ever been.

The Solar Wind Electrons Alphas and Protons (SWEAP) instrument – a Faraday Cup that UAH, MSFC and SAO partnered to design, produce and test – will collect charged particles that comprise the solar wind as the spacecraft travels through coronal gases super-heated to temperatures greater than 1 million degrees K (1.8 million degrees F). 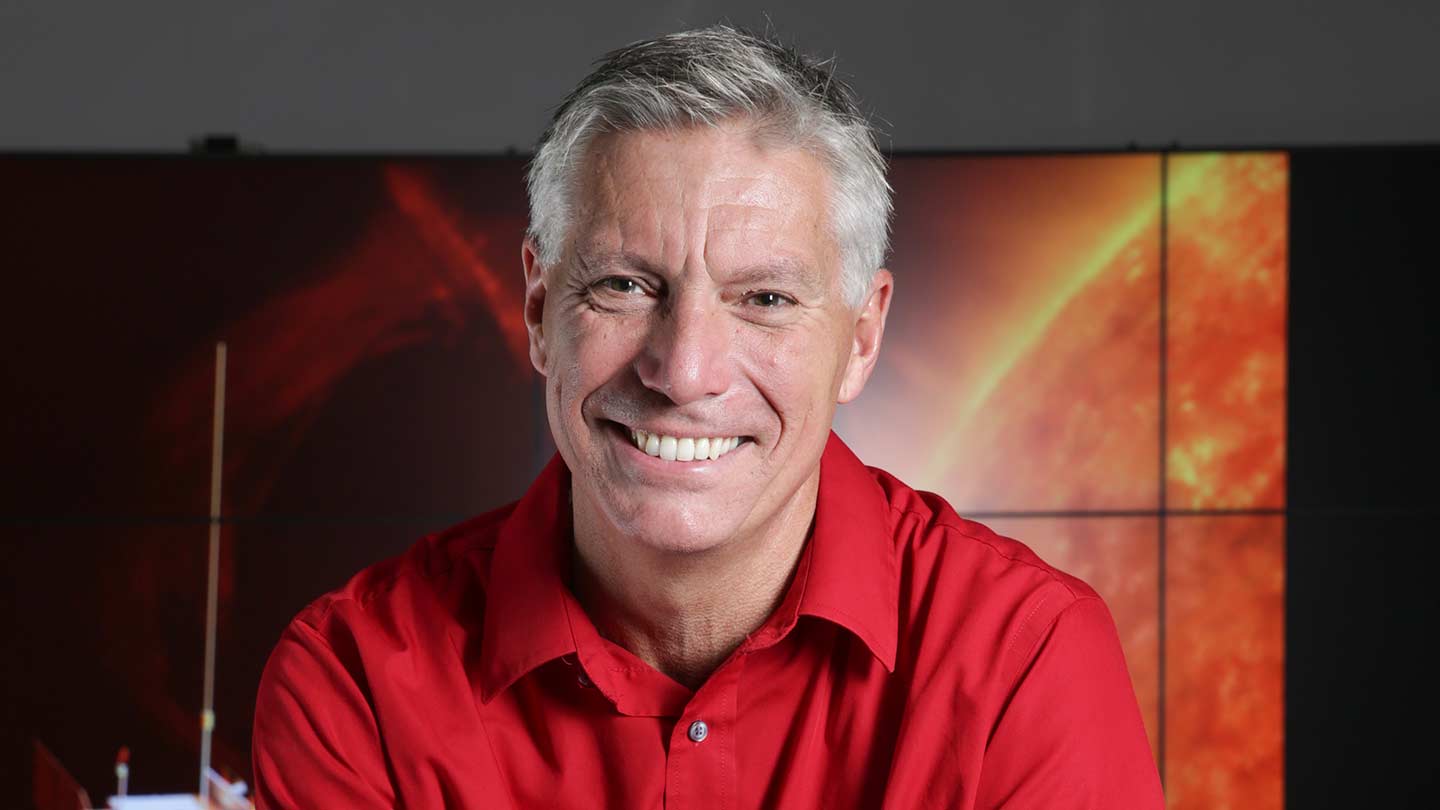 Dr. Gary Zank says no spacecraft has ever gone so close to the sun.

“This is the only PSP instrument that will sample the solar wind from this uninhibited location,” says Dr. Gary Zank, director of UAH’s Center for Space Plasma and Aeronomic Research and chair of the university’s Department of Space Science. “The SWEAP Faraday Cup will be the first such instrument to fly so close to the sun simply because no spacecraft has ever gone so close to the sun, diving into the deep solar atmosphere as it will, and no other is planned.”

The spacecraft is scheduled to launch no earlier than Aug. 11, at 3:48 a.m., with a launch window of 45 minutes. The daily launch window extends until Aug. 23. PSP will launch from Space Launch Complex 37 on Cape Canaveral Air Force Station in Florida aboard a United Launch Alliance Delta IV Heavy rocket. Launch and spacecraft details can be found at https://blogs.nasa.gov/parkersolarprobe/.

“Besides informing us of the physics underlying the atmosphere of our sun, we will learn about the corresponding physics of all stars that are like our sun,” Dr. Zank says. “It will be the first in situ exploration of the atmosphere of a star. The work will therefore be incredibly far-reaching.”

The SWEAP Faraday cup will act something like a solar catcher’s mitt, utilizing it’s window screen-like surface to scoop up samples of the atmosphere of the sun and to measure the detailed properties of electrons, protons and helium ions – the main components of the corona and solar wind. 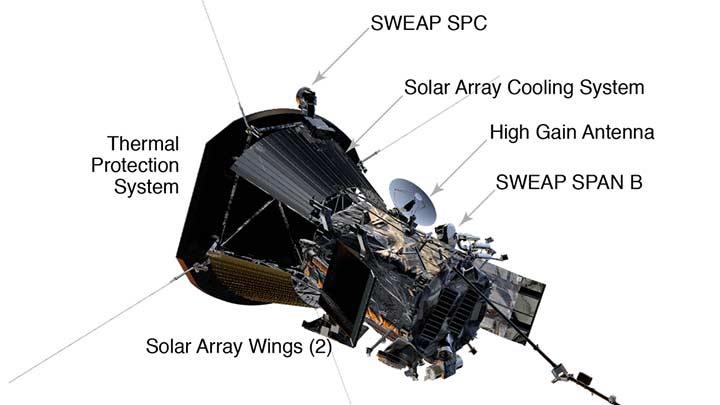 SWEAP SPC designates the Faraday Cup’s position on the spacecraft.

“The most important question to be answered is how the sun heats the solar corona, the region above the surface of the sun, and then drives the huge, highly supersonic solar wind and creates the bubble within which the solar system resides,” says Dr. Zank.

“The surface of the sun is relatively cool – 6,000 - 7,000 degrees K – but the atmosphere above is heated to more than a million degrees over a relatively short distance,” he says. “We do not know how or what the physical process is. We have some ideas, and by measuring the distribution function, we will be able to finally quantitatively identify the physical processes that lead to the existence of the solar wind.”

Flung toward the sun by gravitational assists from Venus, the PSP craft will circle it in a daisy-petal orbit intended to keep the craft from burning up as it enters and exits the hot corona.

Besides SWEAP aboard PSP are instruments to perform four other scientific investigations.

The 1,350-pound craft will have an 8-foot diameter, 4.5-inch thick carbon-carbon/carbon foam heat shield to protect it, with all instruments behind that shield except the one for SWEAP and the antenna for the Fields Experiment.

PSP will have close encounters with a sun 20 times larger and 500 times brighter than it is at Earth. It will explore hot plasma arches as well as solar coronal holes and coronal bright patches discovered in the early ’70s by a Skylab x-ray telescope. PSP will measure the range of energetic particles that compose the features.

“Particles that stream out from the sun through the solar corona will be measured directly by SWEAP, essentially capturing and measuring the density, velocity and temperature/energy of the thermal particles that comprise the bulk solar wind flow,” says Dr. Zank.

These measurements will provide a somewhat Bell Curve-like distribution function that describes how solar wind particles are organized in terms of velocity and energy, and whether the magnetic field of the sun plays a role in organizing the shape of the distribution function, he says. The mission is scheduled for seven years, ending in 2025.

“Of course, there is always the possibility of an extension thereafter. This typically happens after a senior review exercise conducted by NASA to see if the potential and need for further important science warrants reinvestment of further funding,” says Dr. Zank. “If all goes well and the designs of the instruments and spacecraft hold up to the very hostile radiation environment, the mission could last as long as fuel and power are not a problem.”

UAH worked closely with its partners in designing, testing and fabricating many elements of the Faraday Cup, work that was led at the university by Ken Wright, who worked with MSFC partners, a group that at the time included Jonathan Certain.

“Both Jonathan and I supervised UAH graduate student Phyllis Whittlesey, who was involved in a lot of testing of the cup, including exploring the virtual design of the instrument computationally, as well as developing techniques and algorithms to establish that SWEAP could answer some of the fundamental questions that PSP was designed to address,” says Dr. Zank.

MSFC had technical expertise and excellent plasma testing facilities and much of the work that UAH did was done directly at the NASA labs on Redstone, he says.

“It's been over five or six years invested in the preparation of the PSP, from the original conception to the pulling together of a team, the proposal writing and submission, and of course the building of the SWEAP instrument,” says Dr. Zank

The principal investigator for SWEAP is Justin C. Kasper of the University of Michigan with funding though the Smithsonian Astrophysical Observatory (SAO) in Cambridge, Mass. It is a multi-institutional project that includes the University of California, Berkeley Space Sciences Laboratory, the Massachusetts Institute of Technology, Los Alamos National Laboratory and NASA Goddard Space Flight Center, as well as UAH and MSFC.

“To be honest, it's a relief now that the schedule for launch is set, that everything is finally bolted down, the spacecraft fueled and the final preparations for launch being made,” Dr. Zank says. “There were a number of hiccups and complications along the way, but that is now in the past. Now, we wait to see if the instruments will function properly as planned and designed once PSP is launched and activated.”