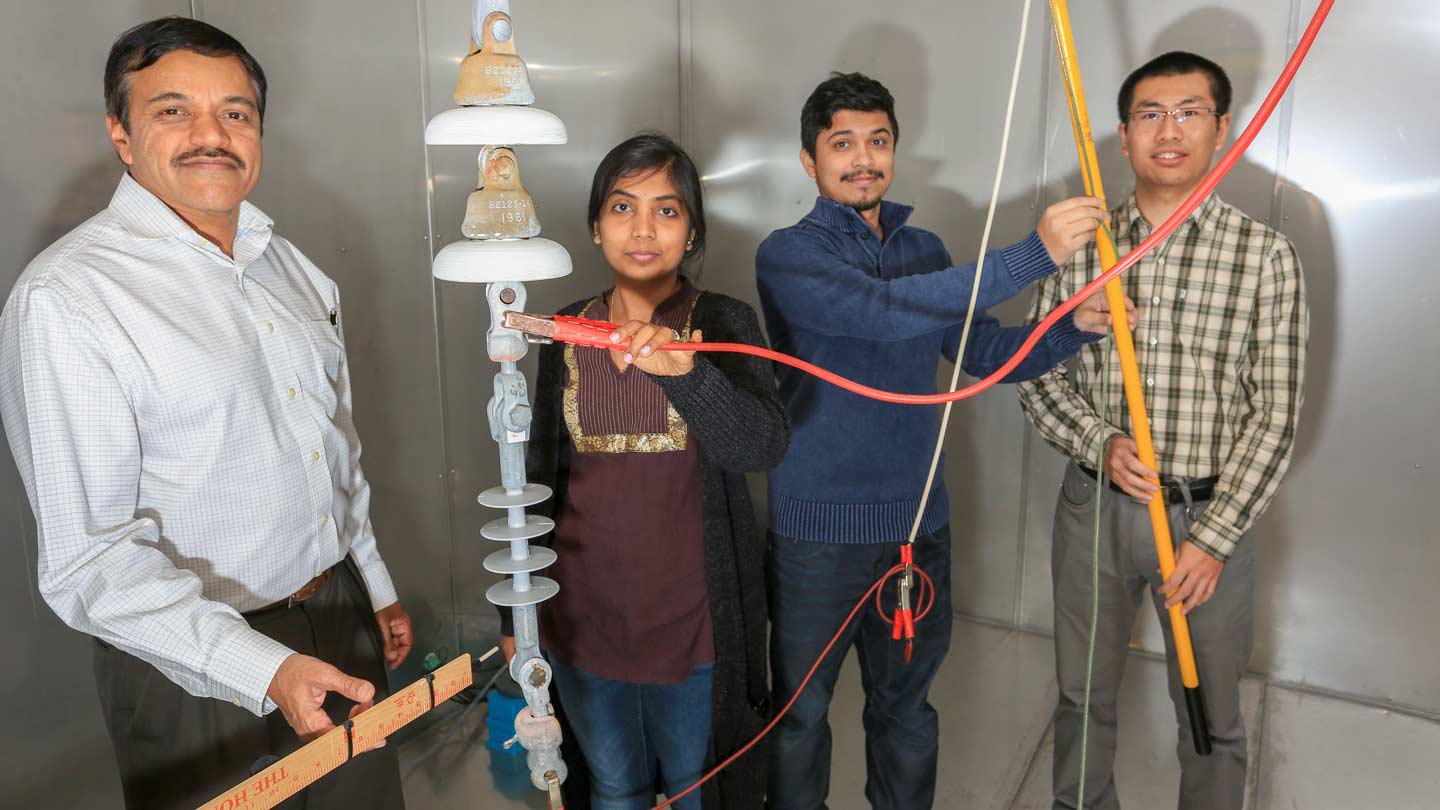 Dangerous and damaging things can happen when electricity goes where it’s not supposed to, and those events can be very costly.

A new laboratory dedicated to predictive failure testing of electrical insulators used by utilities, electrical component manufacturers, aerospace firms and NASA is now open in the Engineering Building at The University of Alabama in Huntsville (UAH).

"The insulating part is what deteriorates over time," he says. "The goal is to identify how it will fail and when it will fail before it fails."

"We want to test the insulator and predict its future performance," says Dr. Gorur. "It’s like the warning lights that go on in your car dash to tell you when trouble is coming. We want to predict when that warning light is going to turn on so the user can take action before the component fails."

Prominent in the lab are a large copper screen clad Faraday cage that protects researchers and electronic data acquisition equipment from high voltage during testing, and a large metal environmental chamber where insulators can be tested over long periods with various accumulations of dirt and using moisture generated by a fogger that’s part of the chamber. The environmental chamber’s data acquisition equipment is located in a nearby room.

"We find out what changes are happening and how long it takes for those changes to affect performance," Dr. Gorur says. The real-time testing and computer modeling go hand-in-hand to aid in understanding the changes in the insulators being tested.

"The advantage of computer modeling is that you can use it to model a wide variety of conditions," he says. "We are quite big into modeling and we do use some commercial modeling products, but we also use some packages that we have developed ourselves."

"For example, NASA needs to know if, once it is up in space, how space will affect an insulating material," Dr. Gorur says. Radiation and the space atmosphere must be taken into account when making such predictions.

"Nondestructive testing is in high demand, is conducted at lower voltages, and calls for sensitive testing equipment and procedures," says Dr. Gorur. "That calls for very precise procedures and for taking care of all the details."

The lab has also featured prominently in undergraduate research, as well, having served as the site for a number of senior design projects.

Prior to coming to UAH, Dr. Gorur ran a similar laboratory at Arizona State University. As part of his start-up package, UAH paid for moving the equipment from ASU. He started to construct the lab in UAH in 2015. He has added additional equipment using his start-up research funds and is actively seeking research projects from utilities, equipment manufacturers and federal funding agencies.

"We are ready," he says, "to serve clients with predictive insulator deterioration analysis."