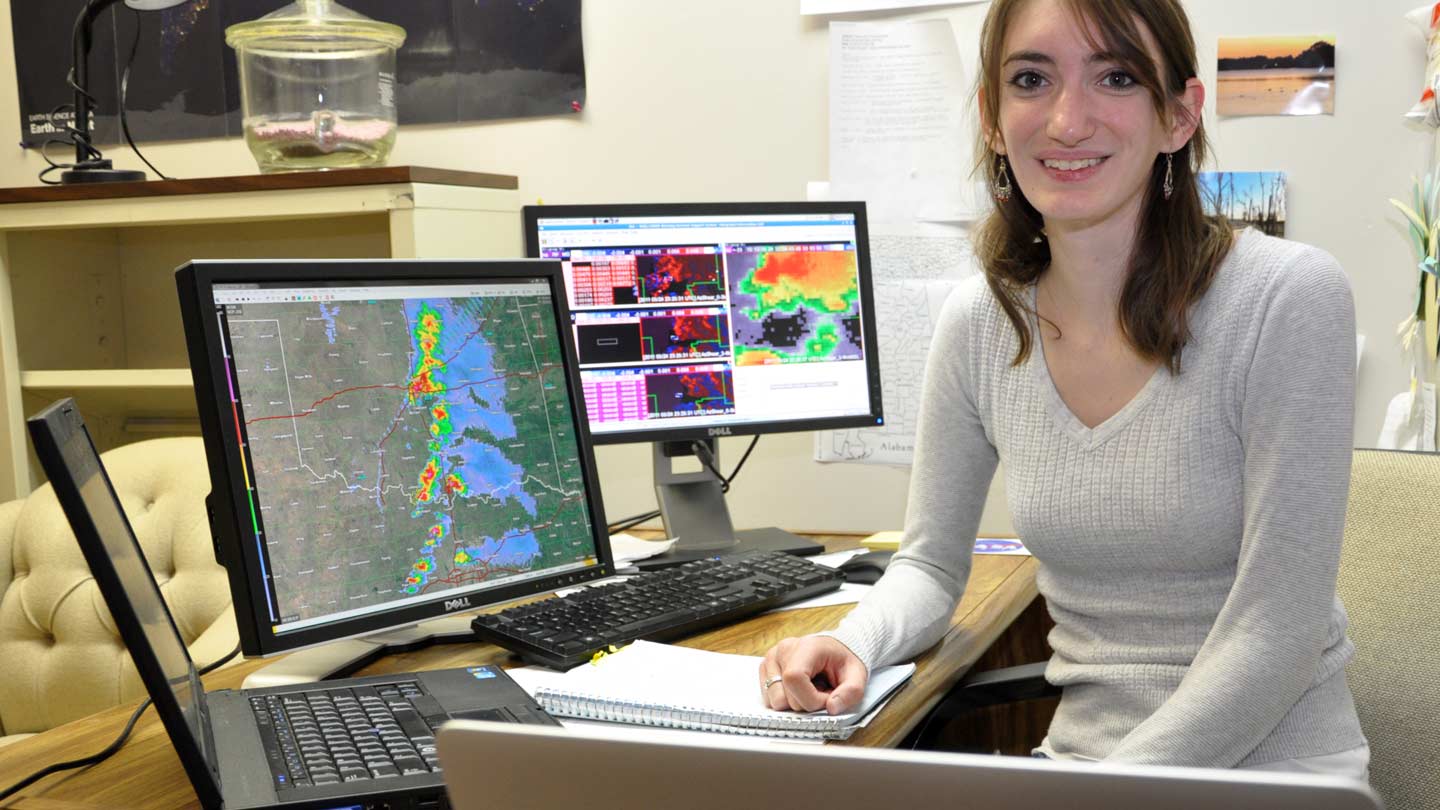 A jump in lightning strikes inside a thunderstorm might be a severe weather early warning, says research by Sarah Stough, a UAH graduate student in atmospheric science.

A sudden jump in the number of lightning strikes inside a garden-variety thunderstorm might soon give forecasters a new tool for predicting severe weather and issuing timely warnings, according to research at The University of Alabama in Huntsville (UAH).

The sudden increase in lightning is one sign a normal storm is rapidly evolving into a supercell, with a large rotating updraft - or mesocyclone - at its heart.

Early results from Stough's research were scheduled to be presented Wednesday, Jan.7, in Phoenix at the American Meteorological Society's annual meeting.

"Roughly 90 percent of mesocyclones are related to severe weather of some kind, while only 25 percent are associated with tornadoes," Stough said.

Because the sudden increase in lightning strikes is either concurrent with - or within minutes of - a supercell forming, UAH researchers are developing algorithms that might be used by forecasters to issue timely severe weather warnings.

"Basically, we keep a 10-minute running average of the number of lightning flashes in a cell," Stough said. "Then, if the flash rate suddenly jumps to at least twice the standard deviation of that running average, there is a high probability the updraft in that cell has strengthened, a supercell is forming and severe weather is more likely with that storm."

"We can use the lightning jump as a nowcasting tool for supercells if the jump is set in the context of that storm's environmental data," said Dr. Larry Carey, a UAH associate professor in atmospheric science. "If the meteorology of the day suggests supercells are likely, the jump can tell us when and where that is happening. Early warning of supercells - especially the first of a severe weather day - is an important forecasting challenge."

The lightning jump has been tested as a forecast tool by National Weather Service forecasters in Huntsville, Ala., and at NWS testing facilities in Norman, Okla.

"I know a lot of forecasters are excited about having this information," Stough said.

While the ongoing research uses ground-based lightning detection networks, the UAH team is also working on being able to use lightning counts reported by the Geostationary Lightning Mapper aboard the GOES-R geostationary weather satellite, which is scheduled to launch in 2016.