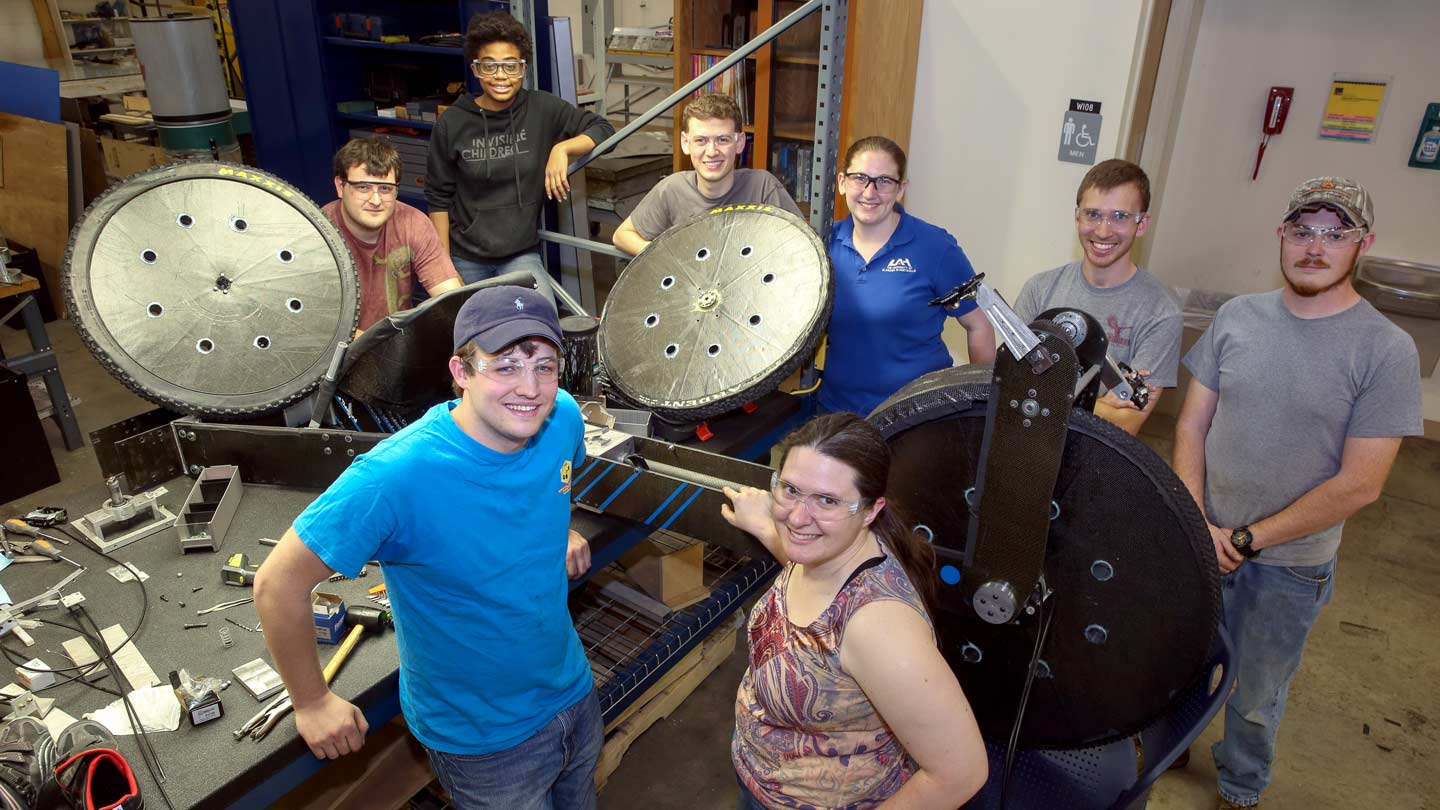 "We have made several modifications this year, with the basic goal of fixing the problematic systems which we discovered last year," says first-year team lead Brian Mixon, a mechanical engineering senior who joined the team in 2013 and enjoys working with composites. "We have reworked the entire front drive train."

Mixon is joined by these Carbon Charger team members:

The NASA Human Exploration Rover Challenge focuses on designing, constructing and testing technologies for mobility devices to perform in the varying environments that are expected as part of human exploration of space. Rovers are human-powered and carry two students, one female and one male, over a half-mile obstacle course of simulated extraterrestrial terrain of craters, boulders, ridges, inclines, crevasses and depressions. Each student team of six members is responsible for building their own rover, and the two course drivers must be chosen from the team.

The UAH team is funded by Northrop Grumman Corp. and advised by Dr. Nicholas Lynn, a mechanical engineering lecturer. The Alabama Space Grant Consortium (ASGC) also contributed funding. Carbon Charger has two leading wheels and one in the rear.

"Due to the flexibility of the carbon fiber design last year, several of our essential drive train components were not secured rigidly into the frame," Mixon says. "In order to ensure that the drive train components stay aligned and in their proper orientation, we have brought our gearing system down to the frame from its previous mounting configuration within the pedal uprights."

The team also upgraded a last-minute fix from last year by replacing an aluminum beam added to stabilize the rear of the rover with three carbon fiber tubes that save weight and stiffen the rear.

A new challenge this year is the NASA rule that teams cannot use commercially available tires, later clarified to allow the use of portions of commercial tires with modifications.

"To abide by this rule, we are removing the sidewall of our tires, which still gives us a great tread surface to overcome the course terrain," Mixon says. "We were also told to remove the foam core used to manufacture our wheels."

Rather than making new wheels, the team modified last year's wheels. Eight holes were cut through the side of the wheel, the foam was dissolved with acetone and removed, and lateral carbon fiber support tubes were placed in the holes and epoxy bonded.

"This innovation should provide our carbon fiber wheels with enough lateral support to traverse the obstacles this year," he says.

Another team challenge has just been getting the work done at UAH's Engineering Design and Prototyping Facility (EDPF), one of the largest student-oriented facilities of its type in the country, referred to on campus as the machine shop.

"Last year, our team lead had 'blue card access' to the machine shop, which gave us as much machining time as needed," says Mixon. "This year, we do not have a blue card on the team, which has made our schedule very tight. We have completed all machining this year during the machine shop's open shop hours every Friday, as well as a few instances of a blue card coming in to help us out."

Blue card access is granted to students who have completed coursework to have the knowledge to work safely on their own in the EDPF. Team members are currently set to take the class to learn how to make machined parts safely.

"This will give the team a bright future, knowing that several members will have access to the machines available in the machine shop," he says. "I am very proud of all we have gotten done this year despite the limited working time that has been available to us."

A benefit of the competition's rigor is the hands-on practical application of composites design, engineering and fabrication. A rover designed to use carbon fiber composites provides the team the opportunity to learn the material's strengths and weaknesses.

"Composites manufacturing has to be the best part of my educational and extracurricular experience here at UAH," Mixon says. "It has allowed students, including our team, to learn about these new and technologically advanced materials."

While very strong, the team has learned that carbon fiber is also very flexible, and steps should be taken to ensure parts do not flex. Following inspiration from last year, the rover's material selection emphasizes composite materials, but aluminum and steel components are used throughout the design.

"When designing a new part, the team often considers the question: 'Can this be made with composites?'" Mixon says. "This often results in great ideas, such as the wheels we created last year."

In his advisory role, Dr. Lynn has been steadfast in supporting the team, Mixon says.

"He provides insight to design changes based on his research experience, and is a great resource to have," he says. "Dr. Lynn also handles the sponsorship outreach to companies around the area. He handles the ordering of parts when needed and helps with the team's finances. He is always there to help whenever needed – even at 3 a.m. between competition days!"