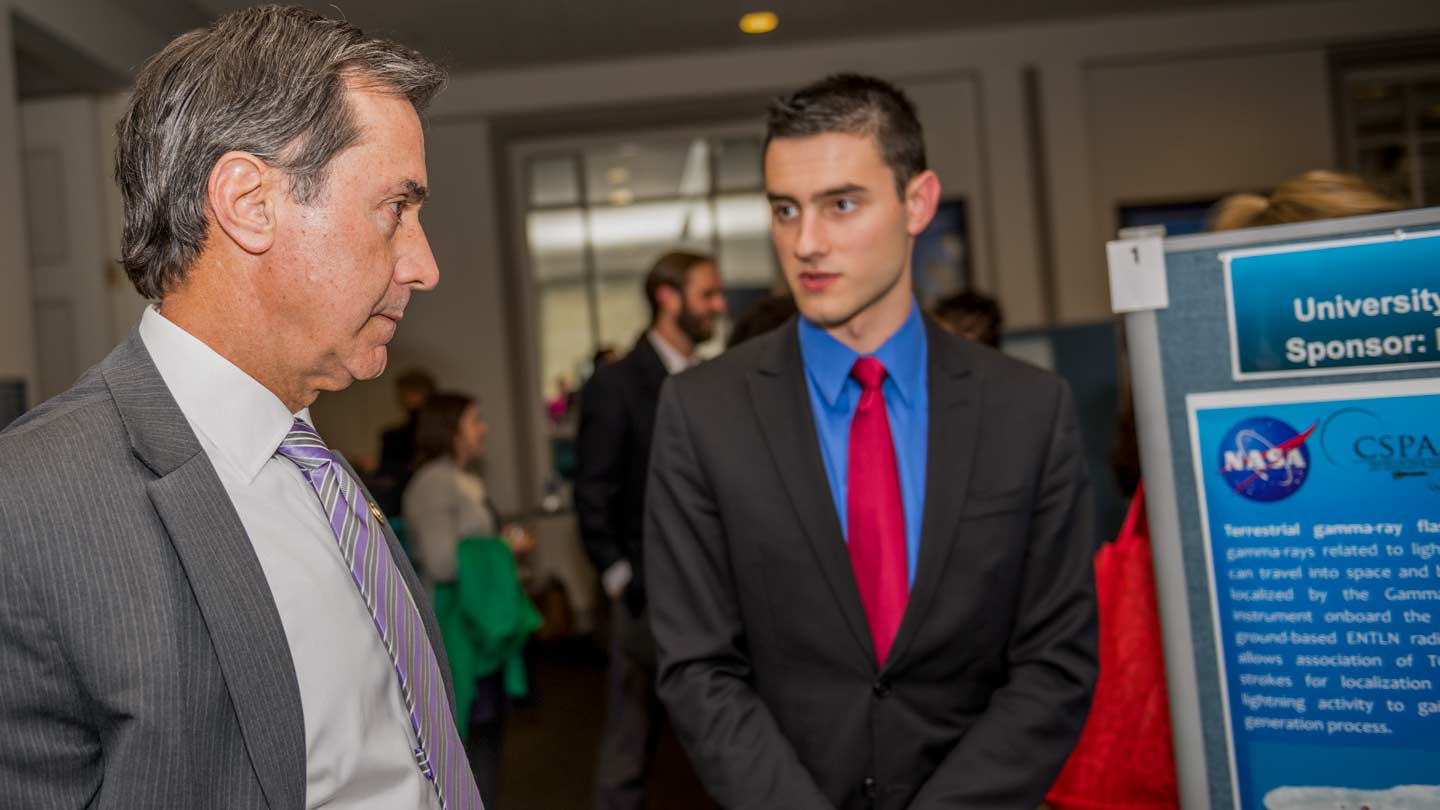 U.S. Rep. Gary Palmer of Alabama’s Sixth District, left, who is a member of the House Committee on Space, Science and Technology, talks with UAH’s Kareem Omar at the 2015 Posters on the Hill in Washington, D.C.

Open-source software for simultaneous satellite orbital and attitude propagation developed by University of Alabama in Huntsville (UAH) student Kareem Omar has won him $10,000 and first place in a student paper competition.

Omar, a senior Honors student pursuing bachelor's degrees in aerospace engineering and applied/theoretical physics, won the Frank J. Redd Student Paper Competition at the 30th annual American Institute of Aeronautics and Astronautics/Utah State University Conference on Small Satellites with his paper on the mechanics of his software infrastructure. Omar also won the top prize in the AIAA Region II Student Paper Competition in the spring.

The low mass and low altitude of cube satellites in low-Earth orbit (LEO) mean that aerodynamic forces cause orbital decay and deorbit. Understanding and predicting aerodynamic effects is critical to mission design, but these effects are coupled to the instantaneous position, attitude and velocity of satellites, making them difficult to model accurately. Previously available design software typically focused only on orbits, or only on generalized dynamics, not coupled orbit and attitude.

"The proliferation of cubesats has brought satellite engineering and mission design into the hands of students and engineering teams across the country and the world," Omar says. "The extreme performance of this software allows simulation of an entire mission, from deploy to deorbit, in less than three minutes. Live 3-D visualizations provide instant feedback, encouraging design iteration, experimentation and education about satellite design and orbital/attitude dynamics. Comprehensive documentation serves as a reference for those interested in the rich field of aerospace simulation."

At the competition, a panel of members from industry, NASA, military and other centers of aerospace knowledge evaluated technical paper submissions. The top six students were designated finalists and invited to present their work at the conference.

"I was fortunate enough to be the top-scoring finalist," Omar says. "It was an incredible opportunity to present and share my work with the aerospace community and gain much-appreciated connections."

He says he'll use the monetary award to further his work in the field, including purchase of new and more capable hardware on which to experiment and develop software.

"It's been a pleasure working with Kareem. He is extraordinarily talented in many areas: science, programming, theatre - he keeps amazing me," says Dr. Briggs. "The project for which he won the Frank J. Redd Student Paper Competition was entirely his own work, as satellite aerodynamics are outside of my expertise."

"I have worked with Dr. Briggs at CSPAR on terrestrial gamma-ray flash (TGF) research for over two years and he is a wonderful mentor and advisor on a broad range of topics," Omar says.

"I also want to thank Marianne Sidwell and Stanley Kennedy, the organizers of the conference and the Frank J. Redd competition, for their tireless work. The conference and competition were extremely well organized and exciting," Omar says. "I also wanted to express how critical this conference is for me personally, as the connections I wrought there will enable me to follow the path I've been working toward for years in the aerospace industry. I don't believe I could have made those connections anywhere else."