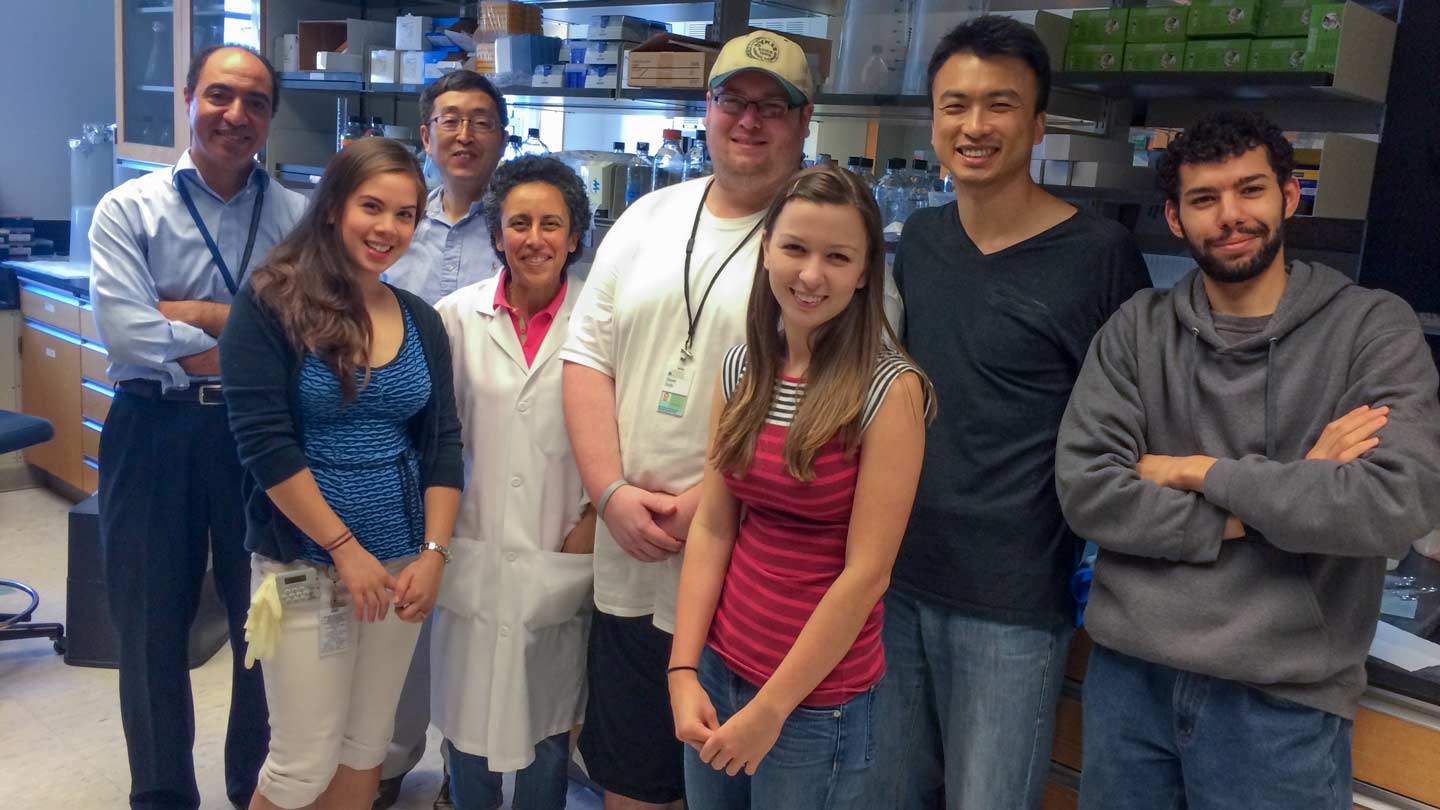 Steven Doyle has had his sights set on the future since he was a child. "Growing up I remember watching various documentaries with my parents on the topics of space and engineering," says the Hillsdale, N.J., native. "From that day, I became fascinated with aerospace engineering and the long line of technological advances that would need to be addressed before greater space endeavors could be done."

Now that contemplative child is a young man and an Honors student at The University of Alabama in Huntsville (UAH), where he is simultaneously working toward his bachelor's and his master's degree in aerospace engineering. And he's once again looking toward the future. "I find it frustrating that some forms of cancer have only shown a marginal increase in the median survival rate in the past 30 years," says Doyle, "so I'm planning to apply to medical school to pursue an MD-Ph.D. and specialize in either medical or radiation oncology." 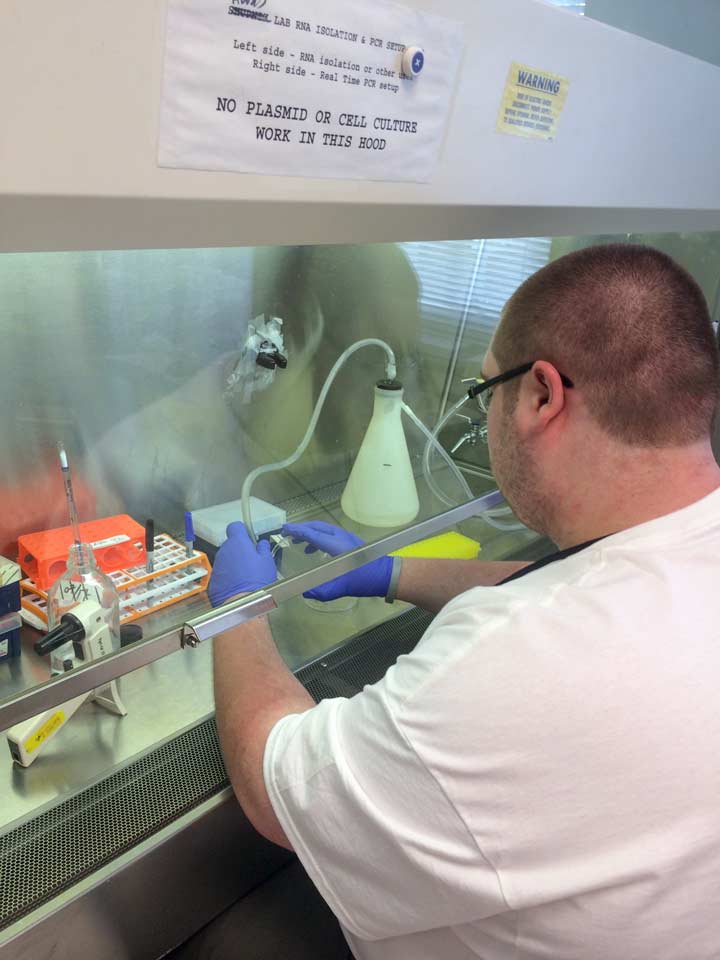 Doyle’s research focus was on the E3 enzyme, which ligases the ubiquitin molecules to the cyclin D subunits.

To increase his chances of acceptance, Doyle - who is also a chemistry and biology double minor - decided to apply to a prestigious summer internship program offered by the University of Virginia School of Medicine. "Having already participated in a variety of engineering research projects," he says, "I thought it would be great to use my empty summer to further my medical research experience." He was fortunate enough be accepted, spending two months in the Abbas Lab alongside assistant professor of radiation and oncology Dr. Tarek Abbas.

"The project I was working on is titled "Regulation of cyclin D stability by the Skp1-Cul1-Fbox E3 ubiquitin ligase," and the reason this project is important for cancer research is because many forms of cancers are found to overexpress cyclin D proteins," he says. "This overexpression is often linked to higher rates of metastasis and lower survival rates. At the same time, recent literature suggests that overexpression allows for increased cancer radiosensitivity, or cell susceptibility, when exposed to DNA damage through radiation."

Thus, with an overarching goal of understanding the role of the ubiquitin system in promoting cyclin degradation, Doyle's specific focus was on the E3 enzyme, which ligases - or binds - the ubiquitin molecules to the cyclin D subunits, D1/2/3. Throughout the process, he says, he learned "a vast range of laboratory techniques including western blots, real-time or quantitative polymerase chain reactions, cell passaging, transformation, transfection, and much more."

Among his many tasks were proving the stability patterns of normal cyclin D1/2/3 and their mutant forms that provide overexpression of the proteins, testing the Skp1-Cul1-Fbox complex with a deletion of one of the proteins, and designing a single-guide RNA capable of inactivating the p27 coding gene CDKN1B. "I will never forget the first experiment that I ran by myself from start to finish and the results that it showed," he says. "While the results may not have been what I expected, I was furthering my knowledge and learning something new that I may never have even considered." 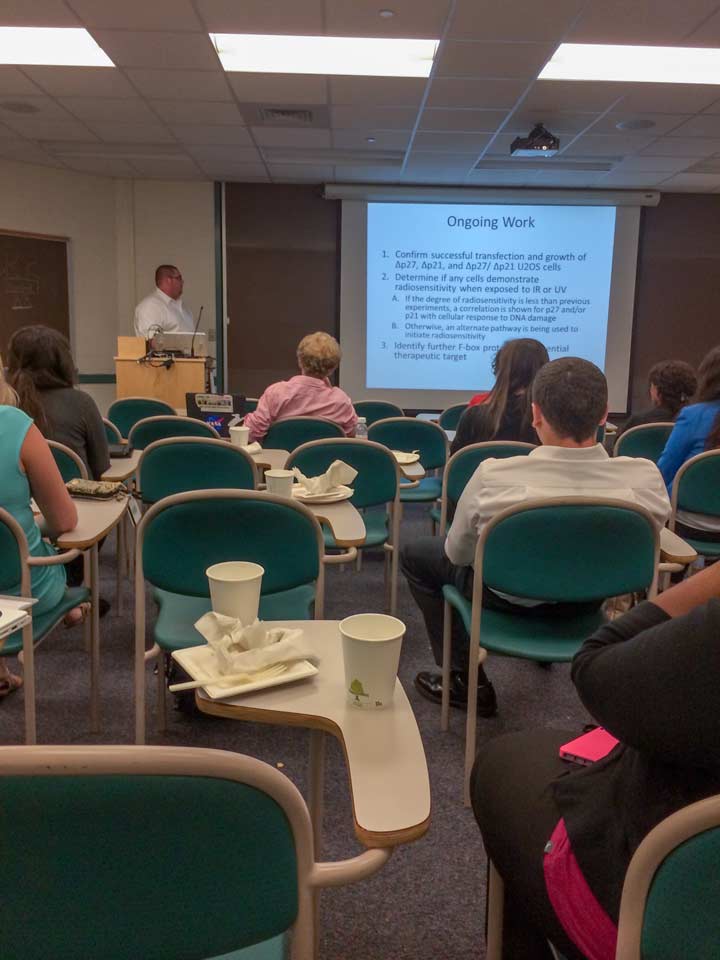 Doyle presented his work and his research findings at the conclusion of his internship.

Doyle found life outside the lab to be equally enlightening. "I was able to meet with other researchers sharing similar interests and further my understanding of the complicated topics associated with cancer," he says. "And I was given the opportunity to partake in weekly lab meetings, which were a great way to engage in discussions with my peers and apply the knowledge I had gained through reading cancer journal papers."

Unfortunately, however, the internship came to an end before he could complete his final assignment - to determine if there were any correlations between the increased tumor suppressor protein stabilities and the observed radiosensitivity. But he left knowing he'd made a significant dent in the quest to find a potential therapeutic target thanks to his successful design of single-guide RNAs for both p27 and p21.

Now that he's back, Doyle is more determined than ever to pursue his dreams of attending medical school. "Being able to see firsthand what it is like to work in basic research has solidified my interest in an MD-Ph.D. career," he says. "And having worked every day on experiments and interpreting the results, I feel that I will be well prepared for the Ph.D. portion of the program."

Of course it's going to take him a while to get there - "The time commitment is longer than the typical MD or Ph.D. track alone," he concedes - but that doesn't concern him overmuch. As when he was a child, Doyle is determined to keep his eyes on the long-term prize. "My goal is to try and make a difference," he says, "not only in the research community, but also in patients' lives."