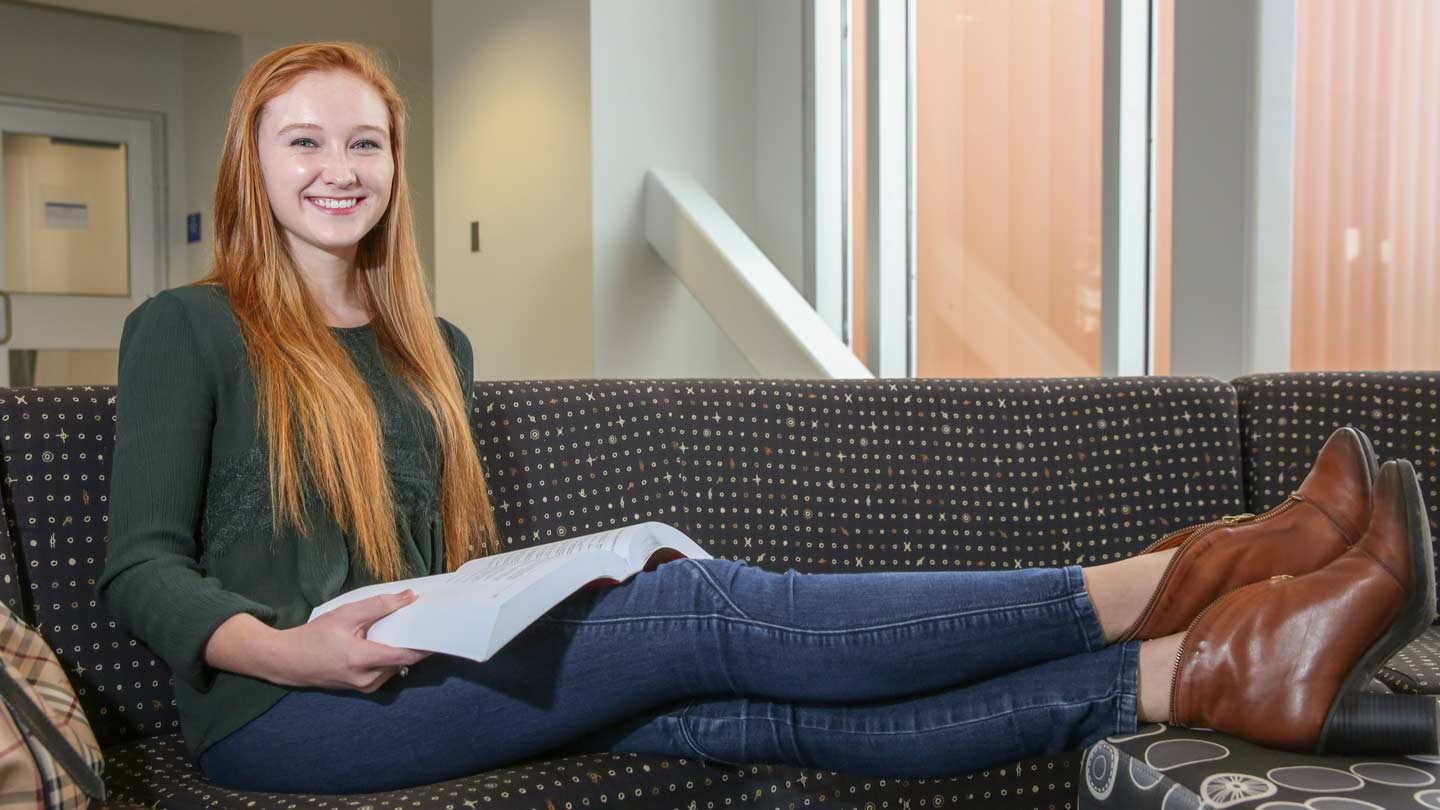 Thanks to UAH’s dual-enrollment program, Molly Ford began her undergraduate career while still in high school. Now, thanks to UAH’s JUMP program, she hopes to graduate with her master’s degree in accounting by the age of 21.

For Molly Ford, a corporate finance and accounting major at The University of Alabama in Huntsville (UAH), being ahead of the game is not a new concept. Despite being only 18 years old, she holds a junior class standing at UAH and is set to receive her master's degree by age 21. But while most others would have a hard time achieving these accomplishments at such an early age, Ford has made the success of her endeavors seem like an easy feat.

"My parents pulled me out of public school in the sixth grade to homeschool me because I wanted more of a challenge," she says, "and I completed the standardized test required to skip seventh grade." She was then homeschooled for one more year before returning to the public school system in the ninth grade, enrolling in Kate Duncan Smith DAR School. It was there she first heard about UAH's dual-enrollment program, which would enable her to attend high school while simultaneously taking college courses.

"I decided to try it because I knew I wanted to get a head start, but I figured I'd better hold out on starting it because I was so young," she says. After all, skipping seventh grade meant that, despite being halfway through high school, she was still only 15. "Instead, I signed up for it my junior year," she says. "I took chemistry and math courses that year and then history, calculus, and economics courses my senior year."

Ford spent her days commuting between her high school and UAH campus, as did her mother, who was acting as chauffeur because Ford was too young to drive. "She's the absolute best," she laughs. Ford would attend three class periods at DAR before heading to UAH, where she would spend the rest of the school day. "My parents were initially concerned about me because I was so young, but they had full faith in me." Plus, they knew Ford could take care of herself. "My parents wanted me to learn self-defense so they had me take karate lessons," she says. "Now I'm a black belt!"

Because all of the college classes Ford took through the dual-enrollment program counted as her basics and electives, she was already a college junior by the time she graduated from high school last spring. She then began attending UAH full time in the fall. Fortunately, Ford had already found a welcoming family in Kappa Delta (KD), one of the sororities on campus. "Because I had already been coming to UAH for two years, I'd met many KD girls," she says. "So when I graduated high school and was able to rush, I figured joining KD was the best way for me to have a support system on campus." Ford accepted a bid from the sorority, and now serves as assistant vice president of finance on their executive committee.

Yet despite having this support system, she still faced the same obstacle that many new students face: being unsure of which career field to pursue. "I came ready to work, thinking that I wanted to go into the medical field," she says. But after shadowing a doctor, she changed her mind. "One night in the emergency room was enough for me! I was afraid it would harden me, or be too tough emotionally." Ford them switched to aerospace engineering before realizing she was most comfortable as a business major. "I like the fact that you can use economics and predict what may happen in the future based on what has happened in the past."

But just because she's in college now doesn't mean she's stopped trying to get ahead. "I'll start the JUMP program next year and work toward my MBA," says Ford, referring to UAH's Joint Undergraduate Master's Program that allows students to double count undergraduate and graduate classes. "Doing the JUMP program means I'll graduate in the spring of 2018 with my bachelor's degree and then graduate again in the spring of 2019 with my master's degree in accounting. After that, hopefully, I'll sit for my Certified Public Accountant Examination."

Despite shouldering such a heavy workload, however, Ford has made time to get involved on campus. "I recently accepted a position as a resident assistant in Central Campus Residence Hall," she says, which she hopes will allow her to help make the adjustment to college life easier for incoming freshmen. "By the time I started UAH full time, it already felt like home because I had such a slow transition into it. But for most people it's new, so making campus feel like home for them is my main focus."

And this past spring, Ford also took on the responsibility of interning for Sen. Richard Shelby's re-election campaign. "I polled people about who they wanted to vote for by going door to door," she says. "It was a paid position, but it was also for experience and networking opportunities." And experience is something she'll have plenty of if she's able to secure the next internship she's eyeing. "I'm hoping to do an internship with an accounting firm," she says. "Some internships count for college credit, but I would do it just for the real-world experience that will help me when I graduate."

And when that day comes, Ford already has her sights set on her next big achievement: landing a job right here in the Rocket City. Because, as it turns out, this ambitious high-achiever places just as much value on family as she does on academics. "I'm an only child, so I'm close with my parents and want to live near them," she says. "I wouldn't mind traveling for a job, but I want Huntsville to be my home base."