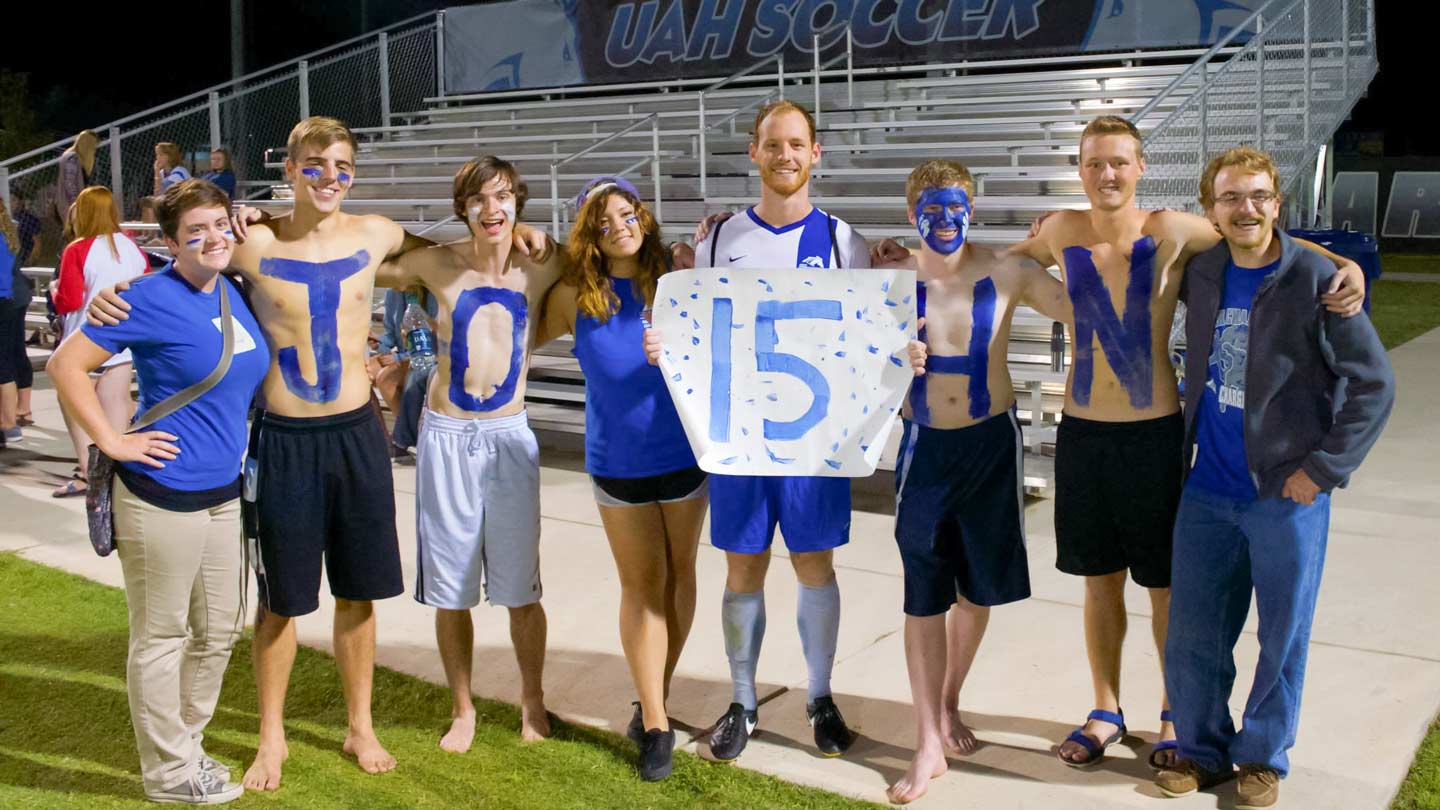 Junior sociology major Christian Bailey (second from right) has found many ways to get involved as a UAH student, from cheering on the Chargers at home games to leading campus tours for prospective students.

With its location in the Tennessee Valley, The University of Alabama in Huntsville (UAH) typically enjoys mild winters. But it was snowing the day Christian Bailey came to tour campus as a high school student trying to decide where to go. "The weather was terrible," says the Arab, Ala., native, "and yet the tour guide - dressed in a t-shirt and shorts - still wanted to show off the school. That was my first impression." It stuck with him, and by the following year, Bailey was enrolled as a freshman. "What it came down to was that I liked the size of UAH," he says. "I felt like I could get involved and I have."

Indeed, since becoming a Charger, Bailey has served as an orientation leader, volunteered with the Association for Campus Entertainment, worked as a desk assistant and resident assistant in Frank Franz Residence Hall, helped out on the homecoming committee, and participated in the university's leadership programs. Now a junior, he is an admissions ambassador and a Lancer, and he will soon be welcoming visitors as a front desk assistant in the new Student Services Building. "I'm really interested in student service roles," says Bailey.

A school can have the best statistics and the best classes, but if it doesn’t feel like home you won’t be happy there.

He's also found time to get involved off-campus as well. After learning about Disney's program for college students from fellow orientation leader Morgan Gilley, Bailey applied for and landed a position as a special guide at the Orlando resort last spring. "I loved it," says. "There were so many different kinds of people - I'd go from helping a guest from Boston to helping one from Polynesia - and yet they were all the same too, because they were all at Disney to have fun. It took away the feeling of 'us versus them' and allowed me to embrace those differences."

While there Bailey took every chance he could get to practice his high school language skills. "When you live in Arab, you don't come into contact with a lot of people who speak Spanish," he says with a laugh. He also decided to teach himself sign language after having trouble communicating with a deaf guest. "I was like I can't even begin to help, so eventually I pulled out my pad and paper," he says. "The family was happy I was trying so hard, but I didn't want to be stuck in that situation again. My goal was to learn the basics, and then I really fell in love with it."

That's not to say his time in Orlando didn't come with any drawbacks. One was the uniform Bailey was required to wear. "It was a blue polo shirt tucked into really short khaki shorts, with a big white safari hat and tall white socks with black shoes," he says, laughing. He will also graduate one semester later than planned after taking the spring off to work at Disney. But for Bailey, the real-world experience he gained was more than worth the modest delay in his academic career. "I would not take it back for anything," he says. "It never didn't feel like a dream." 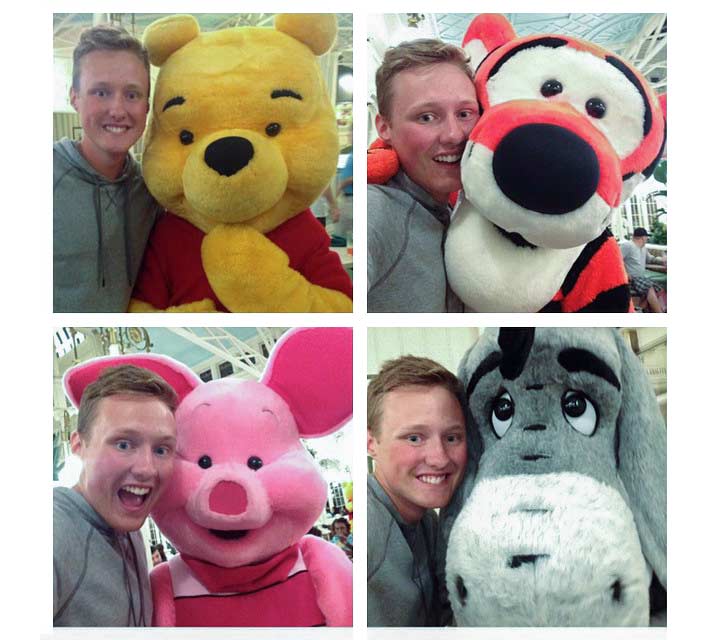 Bailey spent the spring semester in Orlando as a special guide with the Disney College Program.

He also hopes to incorporate his Disney experience into the capstone research project he must complete before graduating with a degree in sociology next year. "I'd really like to study the economic and sociological impacts of tourism ," he says. "When you think about the economy, you think about government and taxes, but some of our biggest industries in the U.S. are not necessarily goods and products. Disney is an example of that. Tourism can bring in a huge amount of revenue and can have an impact on the economy of a country."

In the meantime, he's hoping to make the most of the time he has left here at UAH, where he says he's seen "a lot of big changes" since that frosty February day he first visited campus. "There's been a shift in the students at UAH and how they think about their university," he says. "That's led to a dramatic increase in student involvement - at homecoming, with student organizations, in Greek life. They don't just think of UAH as a place to take classes and learn. They think of it as a place where they can have fun, make friends, and really grow."

That sense of community is something that Bailey makes sure to emphasize when he gives tours to prospective students as an admissions ambassador. He knows what a difference it's made in his college experience and how important it is to feel connected as an incoming freshman. "I tell them that a school can have the best statistics and the best classes, but if it doesn't feel like home you won't be happy there," he says. "But if you visit the school, and it's where your heart is, it's where you need to go." And that's true come rain or shine - or snow.