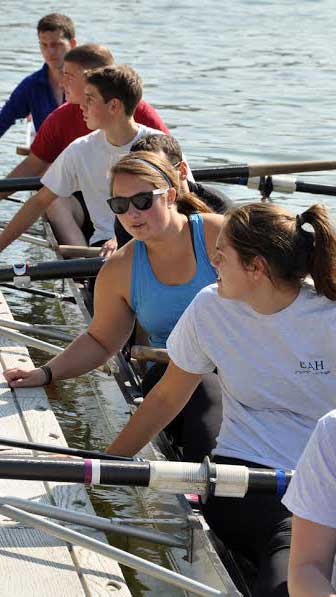 As a child growing up in central Alabama, Montana Etten-Bohm knew when she was 7 years old that she wanted to study the weather.

"When there were tornado warnings, I'd be sitting outside trying to watch a tornado," said Etten-Bohm, who is from Pelham. "I didn't want to be inside."

Now a junior Earth system science major, Etten-Bohm will spend the next two years at The University of Alabama in Huntsville (UAH) as an undergraduate fellow of the Environmental Protection Agency, including a summer internship at a EPA research facility.

"(ESS assistant professor) Rob Griffin approached me about applying for it," she said, "so we wrote a proposal last spring related to water pollution in Alabama."

"She will be studying federal regulations and laws related to water quality in the southeastern U.S.," said Dr. Griffin.

She has a head start on research experience, working for the past several months in NASA's SERVIR center with the ISERV telescope team. ISERV is a high-end amateur-grade telescope mounted aboard the International Space Station, taking high-resolution photographs of the Earth as it passes underneath.

"I'm geo-referencing pictures from SERVIR," she said. "It's interesting to see the bird's eye view of places. It's just different.

"There's a script that tells us the time and location of the space station when each picture is taken. Then we reference them to the base map, a background image with the exact longitude and latitude."

Sometimes matching what's in an ISERV photo to the proper location and orientation on the ground involves looking at small details.

"It isn't easy to reference pictures of a rain forest, for instance," she said. "There are times I'm not looking at large features, I'm looking at specific trees."

A soccer player at Oak Mountain High School, Etten-Bohm was looking to stay fit in college when she found UAH's rowing team.

"I love going out on the river mornings," said Etten-Bohm, who has rowed in several regattas as a freshman and this season. "It's so gorgeous."

While she was looking for a workout, Etten-Bohm wasn't looking for something to fill her calendar. In addition to her work at SERVIR (and fitting in time for classes), she is a resident advisor in the Central Campus Residence Hall, working with the Leadership, Education and Advising Program (LEAP) community. She is also the secretary treasurer for TRUE Chargers and volunteers with UAH's recruiting team, conducting campus tours for prospective students and their families.