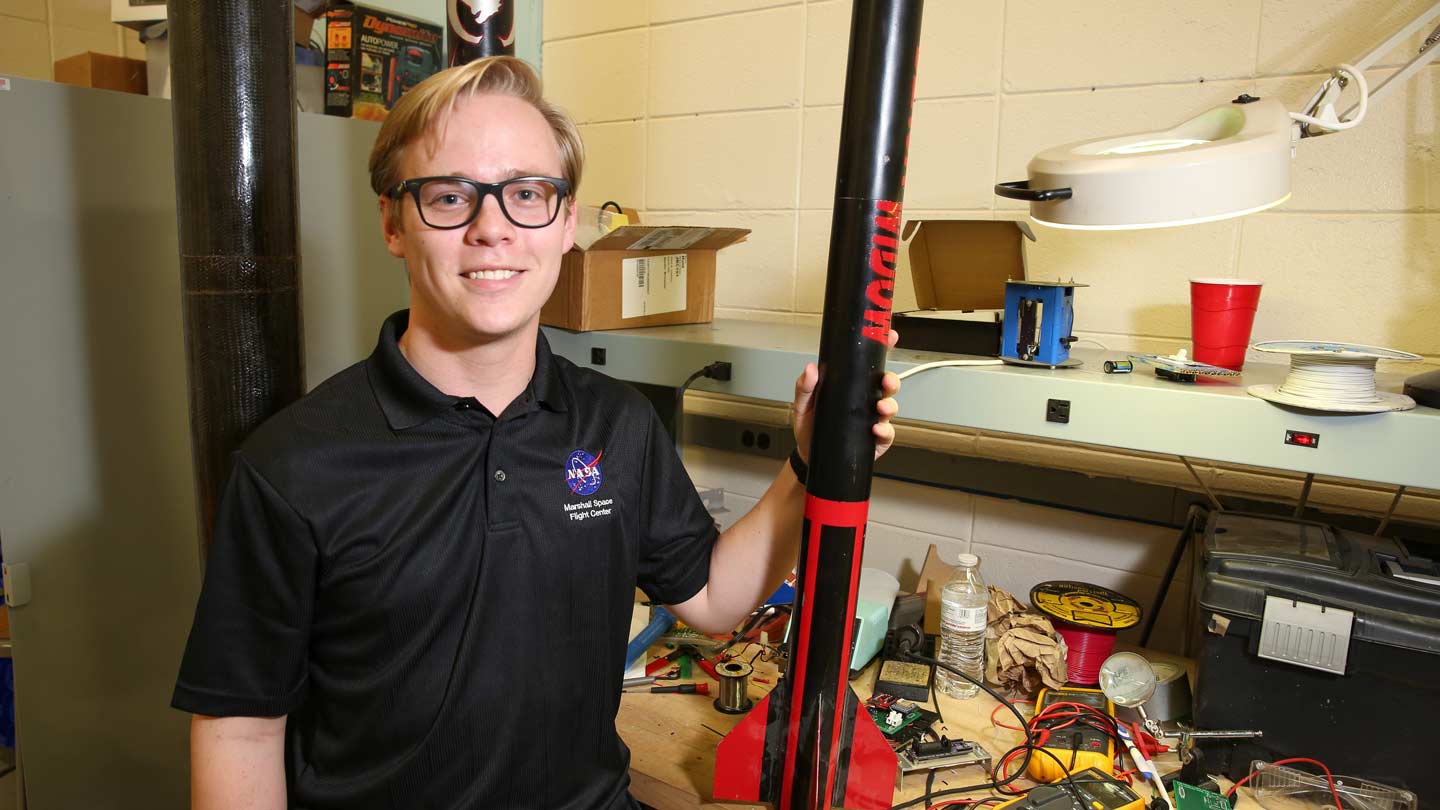 UAH student Davis Hunter, driven by a passion for aerospace engineering, is involved with the Student Launch Initiative and currently working as a propulsion intern at NASA’s Marshall Space Flight Center.

Davis Hunter was making paper airplanes in church at seven years old when another congregant presented a possibility that he had never considered. "They told me that I should be an aerospace engineer," Hunter says. Flash forward to 2018, and he is now a senior aerospace engineering student at The University of Alabama in Huntsville (UAH) and midway through his second internship at NASA’s Marshall Space Flight Center.

"I’m currently interning in the propulsion department, helping with testing and data analysis for the thrusters," says the Clarksville, Tenn., native. One area of focus is transitioning from the more conventional hydrazine systems to safer green propellants. "The Green Propellant Infusion Mission is developing a non-toxic green fuel," he explains. "Not only is the green fuel safer, but it’s also more fuel efficient and offers a nearly fifty percent performance improvement over the hydrazine system."

Hunter originally intended on majoring in mechanical engineering but, he says, "as soon as I was able to see actual engineering with balloons and payloads, I just grabbed onto aerospace." He soon became an active member of the Space Hardware Club, which allows students to build and utilize rockets, satellites, and balloons. And in 2016, he won the American Institute of Aeronautics and Astronautics (AIAA) National Student Paper Competition, going on to present his research at the AIAA international conference in Texas later that year. "Getting that experience with the Space Hardware Club and AIAA really helped me get my foot in the door with NASA," says Hunter, whose first internship with the agency entailed working on a tethered satellite system. 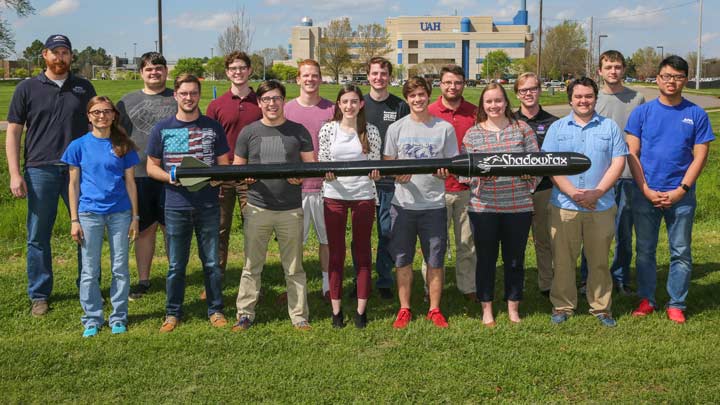 As if his work at NASA doesn’t keep him busy enough, Hunter is also wrapping up his senior design class, in which students spend two semesters designing and building an engineering project of their choice. Hunter elected to join Charger Rocket Works, UAH’s team for NASA’s annual Student Launch Initiative. This year’s competition, which gives students eight months to design and build a payload-carrying rocket capable of reaching an altitude of one mile, takes place on April 7 at Braggs Farm in Hazel Green, Ala. Hunter serves as the team’s rocket lead, requiring him to oversee the design process and ensure that the system is complete before launch. "The Student Launch Initiative is about calculations and models, rather than just manufacturing the system and testing it," he says. "It’s more professionally oriented, and a very good professional engineering experience."

Hunter knows how fortunate he is to have acquired so much career-related experience as an undergraduate. Now, he says, "I’m lucky to help others get to where I am. It’s very rewarding to see it feed back into itself." For those who seek similar internship opportunities, Hunter has three suggestions. First, get started early. "Apply for opportunities despite being new in your career," he says. "I know many juniors who are in their third or fourth internships." Second, take part in extracurricular activities. "I know a lot of people who focused on their GPA, and now they can only get a job in computer-aided design. If you’ve only ever done work on paper, no one is going to want to teach you to not break everything." Finally, take charge. "Don’t be afraid to step into leadership positions. Being in those positions helped me see how people can work together with their particular skills."

With graduation coming up next year, Hunter has been considering his next steps. "I’m definitely getting in at the ground level because I’m working on propulsion at Marshall," he says, "but I am looking for something faster paced and more intense, where I can help move the technology forward. I’d like to use what NASA has already done and implement it in other systems." Blue Origin or SpaceX would be his ideal employers, though he’d like to return to school for a graduate degree first.

No matter where Hunter ends up, however, one thing is certain: "UAH can’t be beat when it comes to undergraduate facilities and internship opportunities," he says. "It turned out to be absolutely the right choice for me."