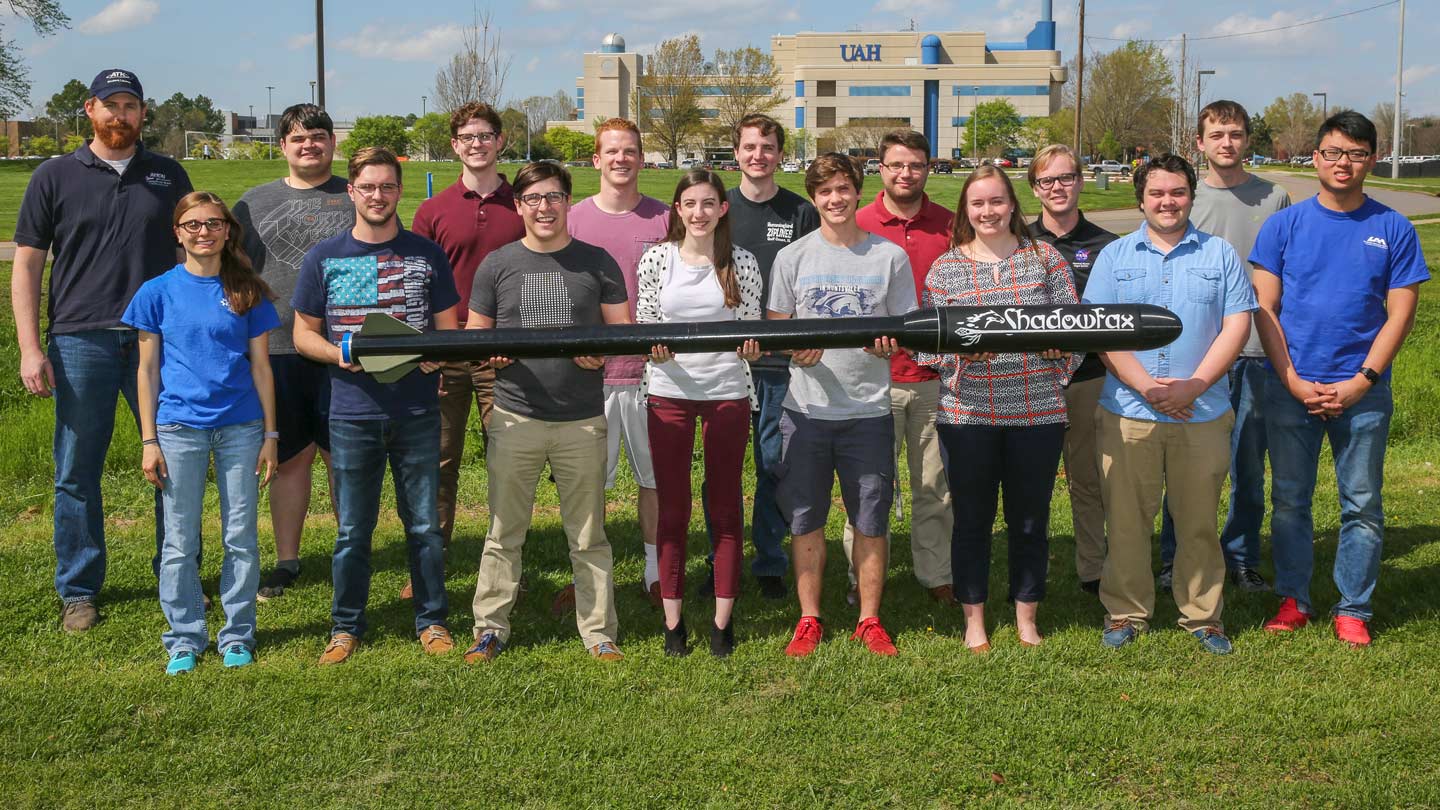 Charger Rocket Works, the student team at The University of Alabama in Huntsville (UAH), is at full thrust to qualify a nine-foot rocket with an autonomous rover as its payload for the launch portion of the coming NASA Student Launch competition April 7 at Bragg Farms in Hazel Green.

"The mission the team selected this year was to fly a rover to an altitude of one mile," says Nathaniel Long, project manager and a senior in aerospace engineering. "Once the rocket landed, the rover would deploy and drive autonomously."

Competition entries have a one-mile high flight as their goal. No section of the rocket can land with a kinetic energy greater than 75 foot-pounds, so maximum descent speed is limited.

"We also have to successfully recover the rocket, which means we need a tracker in it," Long says.

A Rocket Fair from 4-6 p.m. April 6 at the Von Braun Center kicks off the competition. Then launch day April 7 at Bragg Farms starts at 8 a.m. An awards ceremony follows at the U.S. Space & Rocket Center’s Davidson Center for Science Exploration at 7 p.m. Launch day rain date is April 8.

"Dr. Lineberry helps us navigate the UAH bureaucracy, review our work submitted to NASA and generally point out aspects of the system we may have overlooked," Long says. "Jason Winningham, our NAR/TRA advisor, helps the team understand the intricacies of building a high-powered rocket and serves as a knowledge source for those without rocketry experience."

The team utilized the 3D printer in the UAH Engineering Design and Prototyping Facility to construct its fin can and aerodynamic transition, Long says.

"The fin can allows us to easily swap out different fin shapes for testing, and because it is mounted inside the rear body tube, it reduces the drag of the rocket," he says. "The transition section expands the diameter to accommodate the payload while safely transferring the thrust load and maintaining a smooth aerodynamic shape."

At landing, the rover payload gets an initial push from a CO2-powered piston to roll out from the fairing.

"The rover features folding, spoke wheels that unfold once the rover clears the rocket fairing," Long says. "Once the rover is deployed, it drives five feet while taking pressure, temperature and acceleration measurements. Once it has driven five feet, it deploys a solar panel."

Getting all that together has offered the team plenty of engineering challenges.

"Several members of the team had never designed parts for manufacturing, so designs had to change because they physically could not be made or there wasn't room for nuts. We've also struggled with CNC mills and 3D printers being down," Long says. "One big analysis challenge was that our drag coefficient didn't scale from our subscale to our full-sized rocket. That meant we under-predicted our altitude and had to scale down our motor for the competition."

The competition is about much more than building the machinery. By its end, the team will have presented three design reviews to NASA and written over 700 pages of documentation for the project.

"We are also required to do STEM outreach," Long says. "We ran two events at the Science Olympiad and led technical demonstrations at First Lego League, among others."

The team has come together and learned how far its members can push themselves, he says.

"We've had a lot of late nights putting documents together and preparing the rocket for flights, and I think the team didn't realize what it was capable of accomplishing. I also think the team has a greater appreciation for the safety and verification side of engineering. It's not enough to design a product; you also have to prove it will work and survive its environment."

The experience has dovetailed well with a project management class Long is taking this semester.

"I've definitely learned a lot that I could have done better. Running this project has cemented my desire to eventually get into management in my career," he says. "I've also learned how to read and motivate different personality types."