Love of music turns into full-time job for UAH alumnus 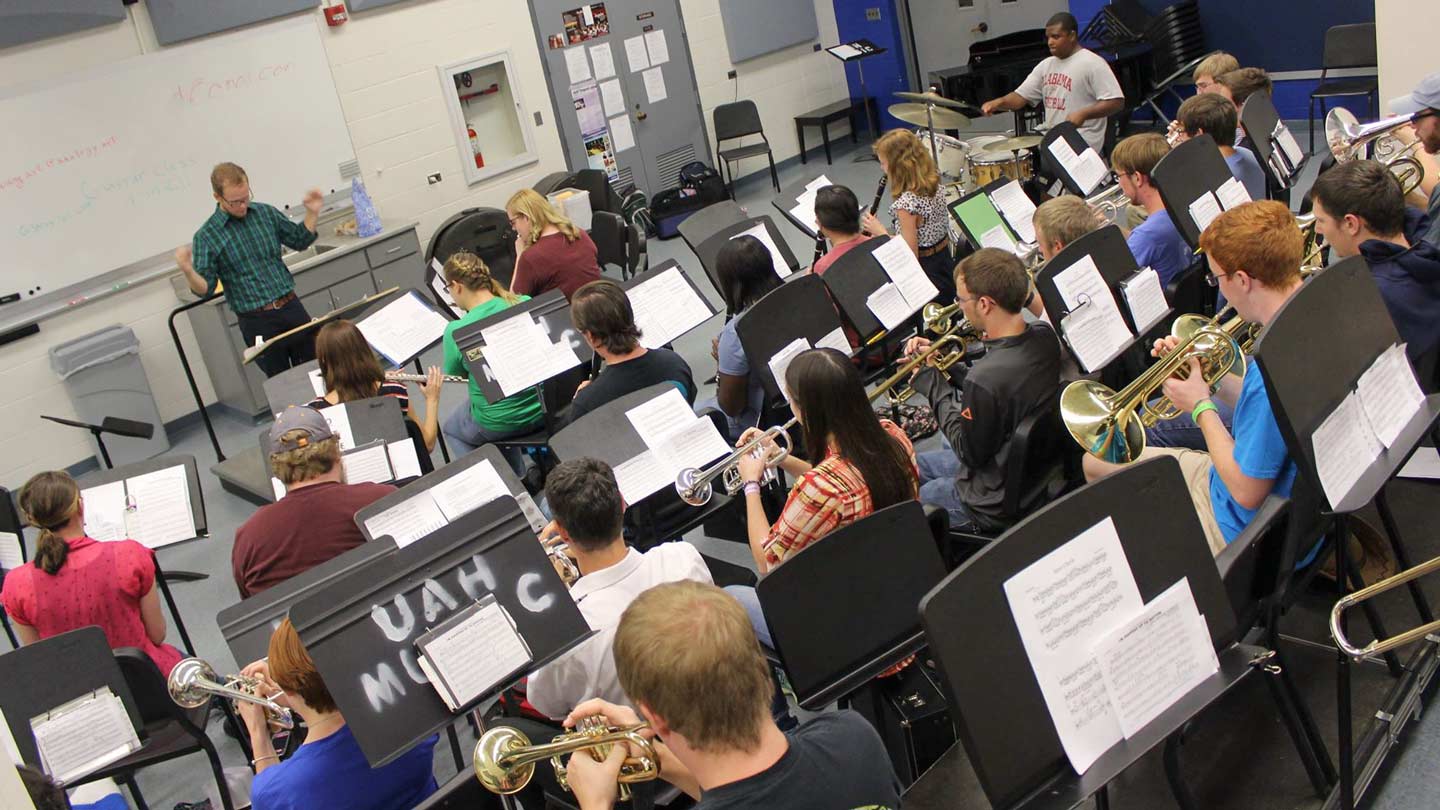 After earning his degree in music education, UAH alumnus Matt Hendrix accepted a position as the band director of Whitesburg P-8. He also serves as the director of the UAH Pep Band.

By the time Matt Hendrix reached high school, he thought he was done with playing the flute. "I hated it!" he says with a laugh. His parents, however, had other ideas. "They said I had to try it for at least a year, and then if I still didn't like it, I could quit." The gamble paid off. Hendrix did end up liking it again. In fact, he spent the next four years playing with the Grissom High School band before going on to earn a degree in music education at The University of Alabama in Huntsville (UAH). Now he works full time as the band director of Whitesburg P-8 (formerly Whitesburg Middle School) and part time as the director of the UAH Pep Band. "I'm happy because I get to do what I love," he says.

A Huntsville native, Hendrix had already been planning to attend UAH, the alma mater of both his father, math major John Hendrix, and sister, education major Beth Hendrix. He just couldn't decide whether to pursue a degree in art or music - until, that is, he attended UAH Theatre's production of "Pagliacci" the summer before his freshman year. "Dr. Ragsdale asked me if I wanted to sit in the orchestra and follow along with some extra music," he says, referring to Dr. David Ragsdale, Chair of UAH's Department of Music and Director of Bands. "So I got a 'behind the scenes' look at what he was doing, which is what I wanted to do."

Soon after, with his sights set on becoming a middle or high school band director, Hendrix declared a music education major. "The education classes and music classes went hand in hand," he says. "The education classes taught me a lot about organization - how to plan your lessons, how to pace them, what's developmentally appropriate for each age group. And the music classes gave me content knowledge and the practical skills I needed to teach, like how to play each instrument, analyze scores, and conduct."

When people end up working at something they used to consider a hobby, it can get old. But that hasn’t happened to me yet!

Hendrix also took every opportunity to gain hands-on conducting experience, putting into practice the techniques he was learning in his conducting classes. "With Dr. Ragsdale's connections, I got to go to some of the middle and high schools and guest conduct their bands," he says, adding that he was even asked back to his alma mater Grissom High School. "That was incredibly stressful!" By the end of his senior year, he had taken over as the director of the UAH Pep Band. "I had subbed for the previous director so I already knew how it worked," he says. "But it forced me to be really organized!"

That extra effort paid off. Hendrix landed his full-time job with Whitesburg P-8 not long after graduating, thanks in part to a resume that he believes was strengthened by his extracurricular activities as a music major. "The best bands in the state are in North Alabama, so UAH's unique location made it easier to build connections in the community," he says. "I really don't think I would have had that personalized experience, plus been able to network and get to know a lot of people in the area, at any other school."

His current workload consists of five band classes that he teaches at the sixth-, seventh-, and eighth-grade levels. "I teach them the ins and outs of their instrument along with the music theory side," says Hendrix. Fortunately, he himself knows how to play all of them. "To teach the different instruments you have to know them, so while I was at UAH I took classes in all of them," he says, adding that he even played with UAH Steel Drum Band.

UAH Pep Band, winners of the chicken dance every time...

As for his weekends, they're typically spent at the Chargers' home hockey and basketball games, directing the UAH Pep Band. "It gets pretty crazy, but there is a real sense of ownership among the pep band members," he says. "The student leaders for the band are phenomenal, and honestly, they take care of about 90 percent of the logistics." That leaves Hendrix responsible for organizing rehearsals, choosing music, and coordinating with the announcers to ensure there's no dead time between them and the sponsorship rotations. "I have a script so I know around when we're playing," he says. "But I have to watch both the script and the game. It was tricky at first!"

No matter how challenging it can get juggling so many responsibilities, however, Hendrix knows he's one of the lucky ones. "When people end up working at something they used to consider a hobby, it can get old," he says. "But that hasn't happened to me yet!" He's also hopeful he can one day inspire others to follow their musical passions as he himself was. "The teachers and professors I had were the tough-love type, and I felt like I grew and matured a lot from them pushing me," he says. "I guess I want to have that same impact on other kids' lives."

And while he knows that he hasn't chosen the most lucrative career, that's ok with him. "Before I started, I asked the music directors I knew, can this work? And how?" he says. "They said as long as you're smart with your money, you can support a family." That's good news, since Hendrix is well on his way to having one. He recently married fellow alumna Cristen (Matlock) Hendrix, a nursing major who has since returned to UAH to pursue her master's degree in the field. No doubt they'll soon be talking their own kids into playing the flute for just one more year…